Despite mass flight cancellations, Heathrow Airport has reported its busiest month in two years following the removal of all travel restrictions in the UK.

A total of 4.2 million people went through the country’s busiest airport in March, the highest since February 2020 and eight times the number who came through the venue in the same month last year.

Travel to and from all markets has surged, but there was particularly strong growth in demand for flights to the European Union, which jumped tenfold year-on-year to 1.4 million.

Huge rebound: A total of 4.2 million people went through the country’s busiest airport in March, eight times the number who came through the venue in the same month last year

Passenger volumes also rose 47 per cent from the previous month as arrivals coming to Britain were no longer required to fill in passenger locator forms or take coronavirus tests from 18 March and quarantine hotels were wound down.

Heathrow noted there had been strong demand for foreign holidays during the weekends and schools holidays, though the levels of business travel and foreign tourists coming to Britain remained poor.

While the airport said this rebound in demand was ‘very welcome,’ it has created significant pressure on its operations, as staff shortages have caused long waits at check-ins, and hundreds of flight delays and cancellations.

Heathrow added that congestion had been exacerbated by over half of international markets still requiring strict coronavirus checks like quarantines and vaccination status on incoming travellers.

The West London site observed this had led to especially difficult bottlenecks during peak travel times and is recommending passengers check with their air carrier when they should travel to the airport.

British Airways has cancelled dozens of flights to or from the airport this morning, while passengers travelling through Heathrow have complained of three-hour flight delays or long waits to collect their luggage. 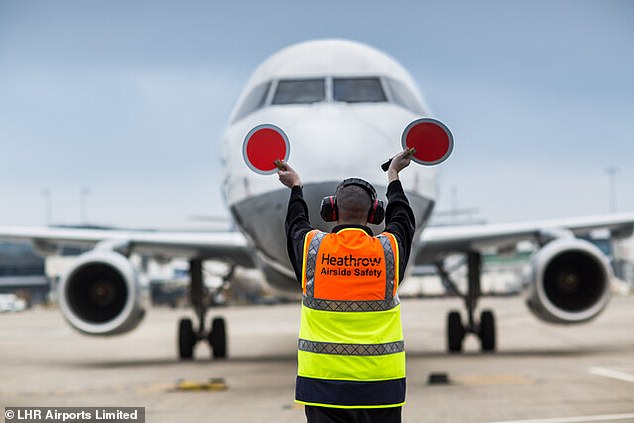 New hires: London Heathrow Airport has already announced that it is hiring 12,000 more employees in anticipation of a massive holiday boom this summer

This follows multiple cancellations last week when the end of the Easter school term led to an onrush of Britons looking to get away for an overseas break.

Heathrow has already announced that it is hiring 12,000 more employees in anticipation of a holiday boom this summer, when demand is forecast to near pre-pandemic volumes on some days.

However, these employees might cope with fewer-than-expected travellers as Heathrow warned that demand could be affected in the medium-term by high oil prices, the conflict in Ukraine, weak economic growth and potential new Covid variants.

Overseas excursions were set back in December and January by the emergence of the Omicron variant of coronavirus, leading governments across the world to reimpose new travel restrictions.

‘The aviation sector has been rebuilding capacity ahead of a summer peak, so resources are stretched,’ the British Airways hub remarked.

‘Heathrow is working closely with airlines and ground handlers to make sure this increase in demand can be met while keeping passengers safe.’