Vaporizing cannabis oil at high heats produces a known carcinogen, according to a new study.

This increasingly popular way of using cannabis, called ‘dabbing’ uses highly concentrated cannabis oil, and its potency has been the subject of controversy.

The Portland State University study found that when a ‘dab’ of highly concentrated cannabis oil was heated and vaporized at very high temperatures, the process produced benzene.

This is one of the first studies to confirm a carcinogen in any form of cannabis.

This means that people with lower incomes or lower levels of education are likely at greater risk of exposure, according to one of the study’s authors.

Marijuana is now legal in 25 states and the District of Columbia. The once-reviled drug is now largely destigmatized, but the Portland State University (PSU) researchers warn that there are still plenty of unanswered questions about cannabis.

The use of highly concentrated butane hash oil in vaporizers – called ‘dabbing’ – has become increasingly popular, but the process used to produce the potent form of cannabis is risky, unregulated and may contaminate the cannibinoid with other substances.

Pressurized butane is sprayed over marijuana, acting as a chemical solvent to extract cannibinoids, the active ingredients in marijuana, including THC.

That process produces an oil, which is then heated to ‘purge’ the butane. The end result is BHO, or hash oil, or, affectionately, ‘honey.’

The study calls the origins of BHO creation ‘backyard chemistry,’ which isn’t far off; the process can be done using a hot plate.

This study comes after two people were killed in an explosion caused by the process used to make butane hash oil, a form of dab, in Portland, Oregon in July.

Researchers at PSU vaporized small amounts of the oil – ‘dabs’ – in the way a consumer might at home.

When the researchers analyzed terpenes that were vaporized at high temperatures they found benzene, a known carcinogen. They also found methacrolein, a relative to the carcinogenic chemical acrolein.

Even more worrisome, terpenes are becoming increasingly popular additives, because they intensify the fragrance that cannabis fans find so enticing. Dr Strongin says that consumers may want to ‘cut back’ on these additives.

This study indicates that the processes of making and vaporizing highly concentrated hash oil may carry with them ‘significant amounts of toxic degradation products.’

The researchers found that dabbing at higher temperatures produced ‘significantly higher concentrations [of the carcinogens] than were present in the ambient air.’

The study’s co-author, Dr Robert Strongin, says that dabbing can be done safely, if the user controls and monitors the temperature that the oil is reaching.

Unfortunately, it’s mostly ‘poorer or less educated’ recreational users that ‘might just heat it too much’ by using devices without reliable temperature controls.

Dabbing is sometimes done using using paraphernalia as simple as a large nail and a torch with no temperature control, like a creme brulee torch.

‘People that can afford it can buy electronic nails, and that will mitigate any exposure to carcinogens,’ he says, adding that he would not discourage someone using the oil medically and safely to stop doing so. 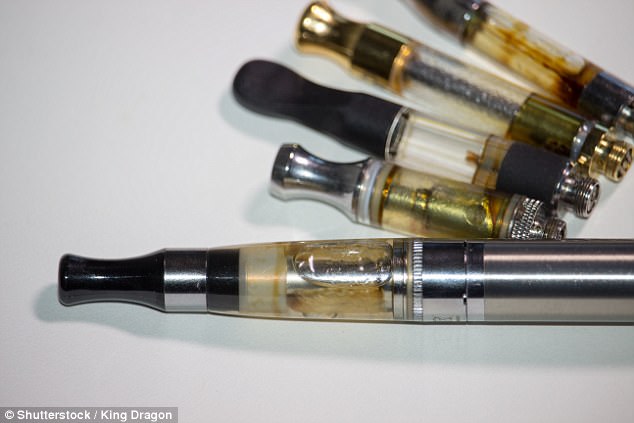 A new study found that vaporizing highly concentrated hash oil, or dabbing, produces a carcinogen called benzene. The higher the temperature setting is on the vaporizer, the more concentrated the benzene in the vapor will be, according to Portland State University researchers

Still, the highly concentrated oil has not been the subject of much research and it’s rapidly claiming cannabis market.

Dr Strongin says that one of the reasons cannabis and its extracts are so poorly understood is that ‘it’s more regulated right now for researchers than for users,’ even in places like Portland, Oregon where he and his team are based.

Marijuana and its derivatives are still illegal on the federal level. Dr Strongin says that the National Institute on Drug Abuse is very supportive of cannabis-related research. Still politics and federal policy can be a sticking point in the review of drug-related study proposals.

A growing body of research has shown that cannabis can improve quality of life for cancer patients by helping them to manage pain and alleviate vomiting and nausea associated with chemotherapy. It’s medicinal purposes have been the driving vehicle behind the movement to legalize marijuana.

Dr Strongin expressed concern that his study’s findings could create backlash against the legalization movement for marijuana, but says he’s ‘neutral.’

‘I don’t want to influence the regulation [of cannabis], I just want to give people facts,’ he adds.

These new findings of carcinogens in a cannabis extract are important reminders that ‘it is imperative to study the full toxicology of its consumption to guide future policy,’ Dr Strongin says.