Heatwave goodbye! Temperatures are set to plummet by as much as 18F by tomorrow

Britain will face downpours and cooler temperatures this week following days of sunshine and warm weather.

The country basked in unseasonably warm temperatures this weekend, with thousands of Britons ignoring repeated warnings to stay home as part of ongoing efforts to clamp down on Covid-19 by heading to DIY stores, parks and beaches.

Police were seen speaking to individuals sunbathing alone or with a partner in Greenwich Park, Hyde Park and St James’ Park in London yesterday, ahead of the country entering its sixth week of coronavirus lockdown today.

B&Q’s decision to reopen 130 stores also saw massive queues forming outside its outlets in Watford, Edinburgh, Bristol and Swansea, as people used the shutdown to catch up on DIY.

Police have moved to crack down on those flouting lockdown rules put in place to slow the spread of coronavirus – with would-be holidaymakers caught driving hundreds of miles to beaches and national parks.

But the warmer weather is now set to come to an end, with two weeks’ of rain expected to fall across Britain tonight, with the Midlands and Wales forecast to see 33mm in the next 24 hours alone.

Other parts of the UK will see 10-15mm showers as the country enters its sixth week of coronavirus lockdown, in a return to more typical April weather following the weekend’s heatwave.

People make the most of what could be the final day of dry weather on the beach at Lee-on-Solent, Hampshire, earlier today 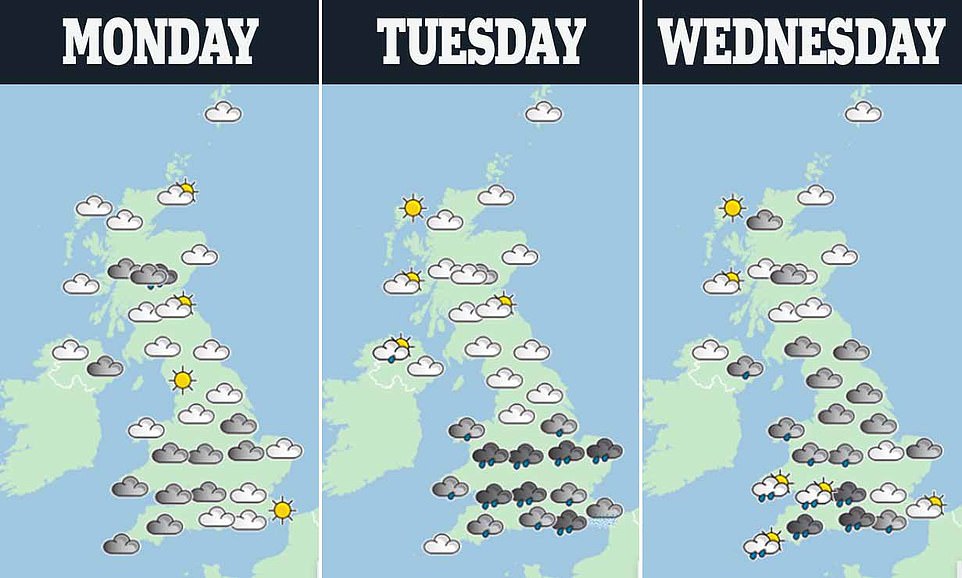 The country’s worst-hit areas, most likely England’s midlands and Wales, are facing up to 30mm of rain in the next 24 hours

Met Office meteorologist Oli Claydon said temperatures would be ‘a lot cooler from today’, with a possible 70F (21C) in London dropping to 52F (11C) by tomorrow.

Parts of northern England will see temperatures of 52F (11C) today as they bear the brunt of the downpours.

Wednesday will be a little warmer, with possible temperatures of 61F (16C), but a new band of rain will be moving up towards the north east, which could see 22mm of rainfall.

Thursday will see scattered showers – some heavy and thundery – across many parts of the UK.

It will be a ‘cooler, more unsettled week’ for much of the UK as temperatures return to average for this time of year, with some downpours expected.

Warm conditions during the UK’s fifth weekend in lockdown due to coronavirus prompted concern that members of the public could defy restrictions on movement.

Forecaster Craig Snell said across Wales, the Midlands and over towards Yorkshire on Monday, it is expected to be cloudy with outbreaks of rain. 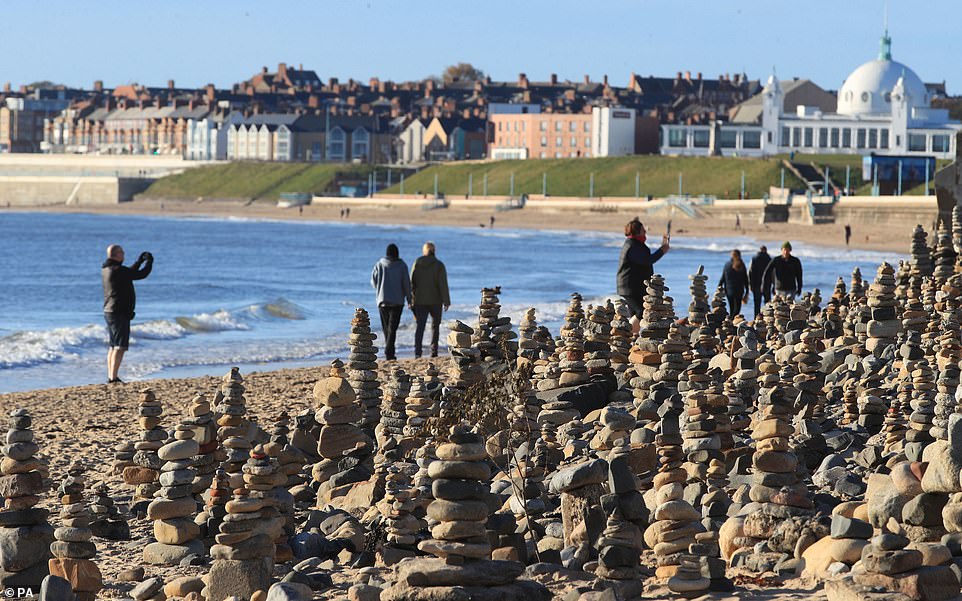 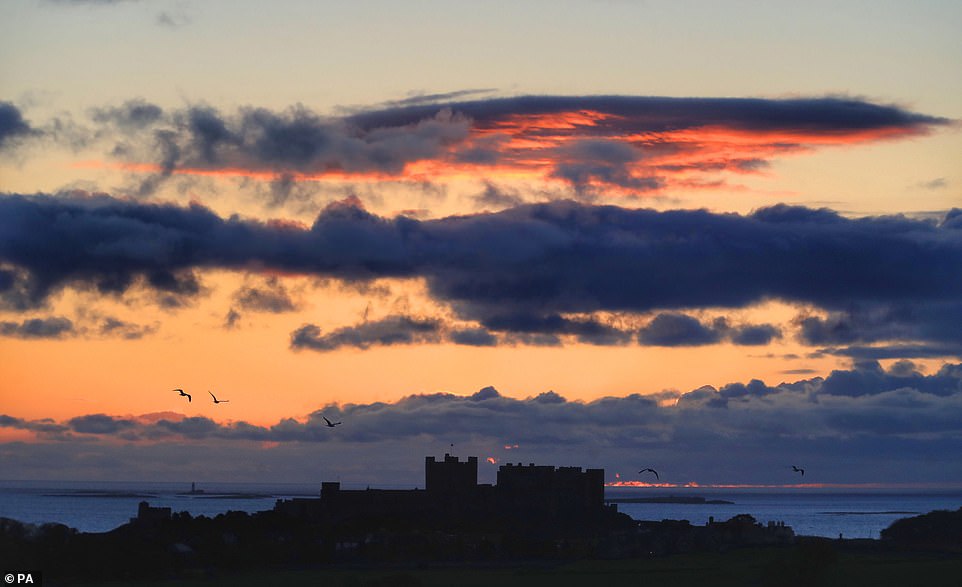 Bamburgh castle on the Northumberland coast today at sunrise, as rain and lower temperatures are expected across the country this week following days of uninterrupted sunshine and warm weather 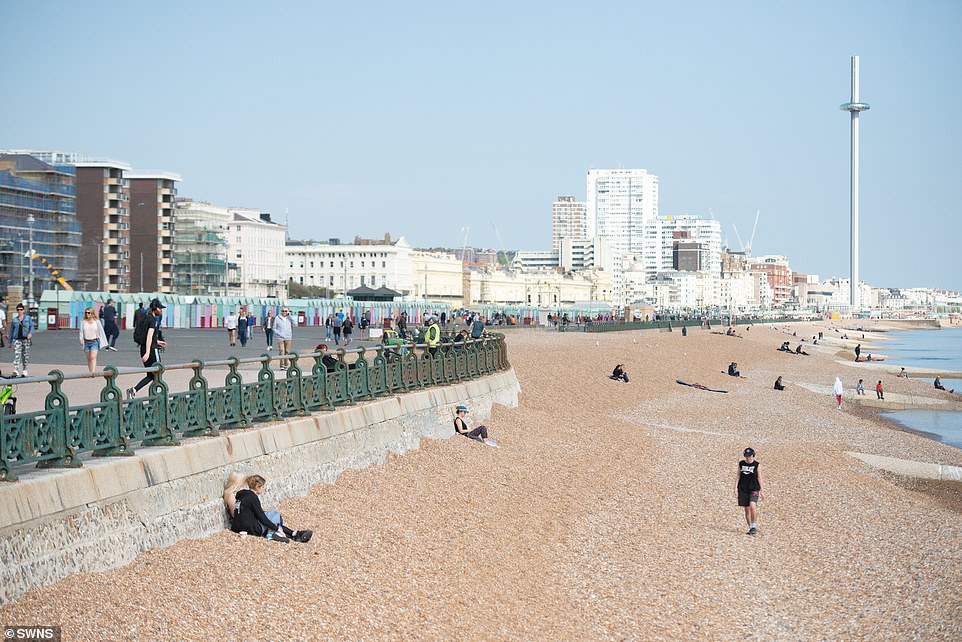 On Tuesday, a spell of persistent rain is expected to move across parts of England and Wales, while bright spells and scattered showers continue in Northern Ireland and Scotland.

Another band of rain will push north-eastwards on Wednesday, according to the Met Office.

‘So on the final day of April, we will actually have a day of April showers across many parts of the UK,’ Mr Snell said.

‘A much more different picture from this week where places have just seen blue skies and sunshine.

‘Next week, there will be a lot more cloud in the sky and for many of us we will see some rain at some point.’ 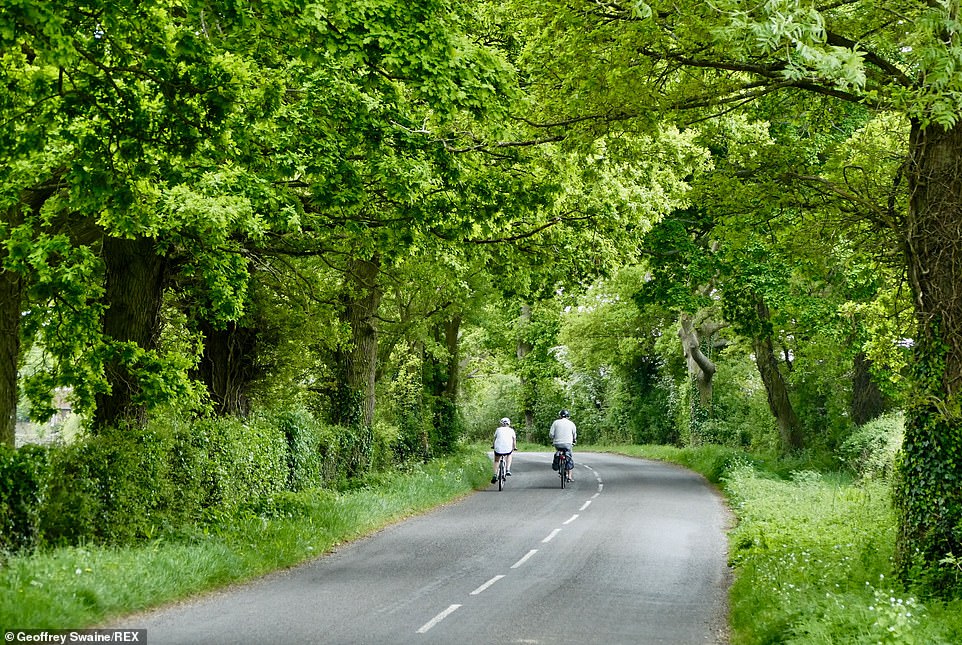 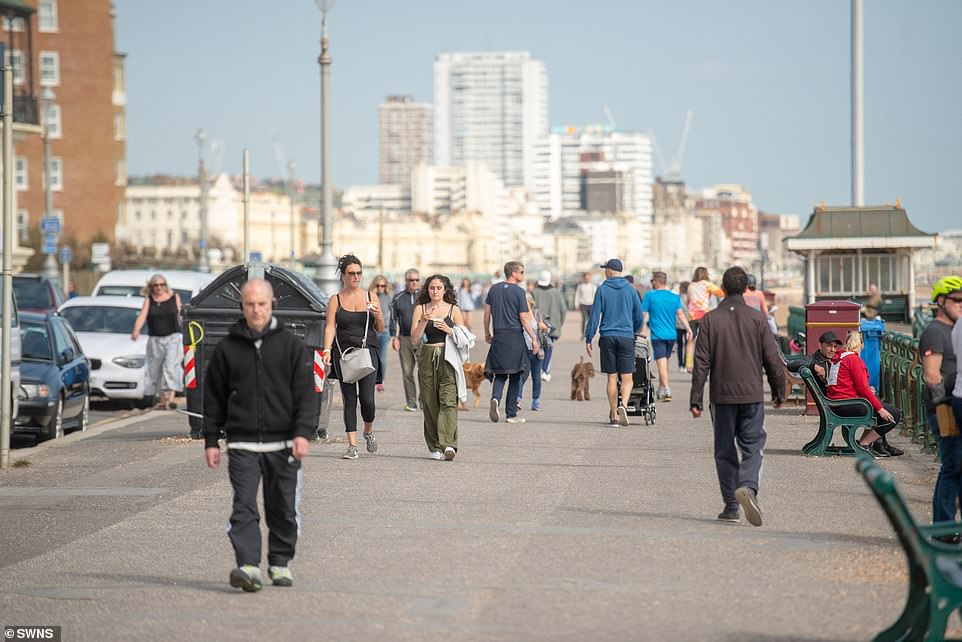 Groups of people stay a safe distance apart as they walk along Hove seafront today, with temperatures reaching a high of 32F 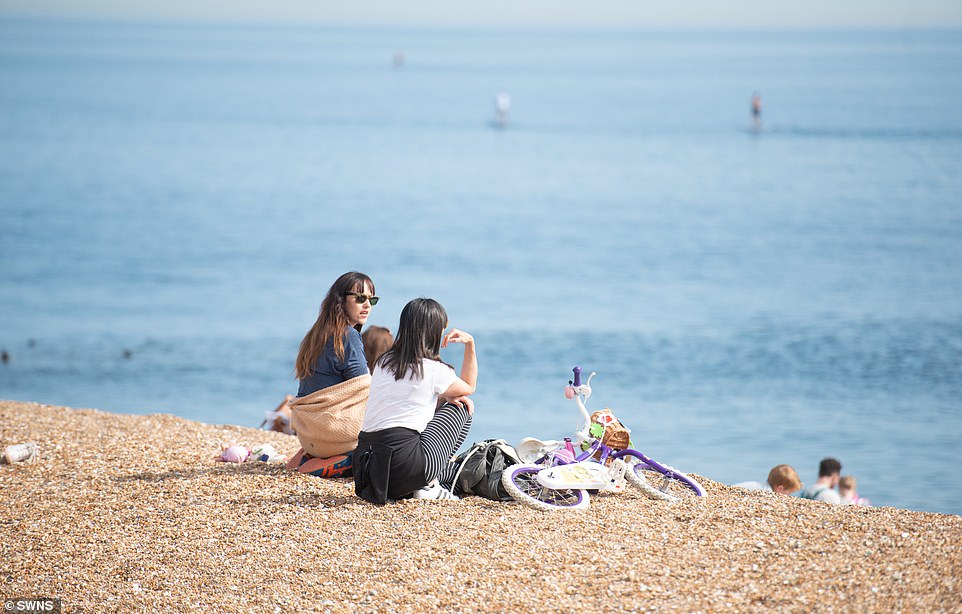