Israeli hot: Middle East cities are hit by highest temperatures ever with many seeing temperatures above 122F (50C) every day last week

By Kate Plummer For Mailonline

Cities across the Middle East are experiencing heatwaves with record breaking temperatures in the regions.

Baghdad in Iraq, the worst affected country, recorded its highest and second highest temperatures this week, reaching 51.7C (125F) on Tuesday and half a degree cooler on Wednesday. Towns in the south have unusally topped 50C (122F) every day.

It comes as Iraqis experience a lack of affordable electricity and air conditioning due to war and corruption and many are struggling to keep vital equipment such as refrigerators running, on small, expensive supplementary generators.

In Basra, Iraq’s southern port city on the Gulf, temperatures have reached 50C (122F) or above every day in the past week, hitting 53C (127.4F) on Monday and Tuesday.

Meanwhile, NASA has said that this June was the warmest ever measured, equalling the record set last year. Southern Iran and Iraq have the world’s most consistently high temperatures.

The highest recorded air temperature in the past half century was in Kuwait in 2016, where it reached 54C (129.2F). That would officially be the highest ever recorded but for a reading made in 1913 in Death Valley in California, which is now thought to have been wrong. 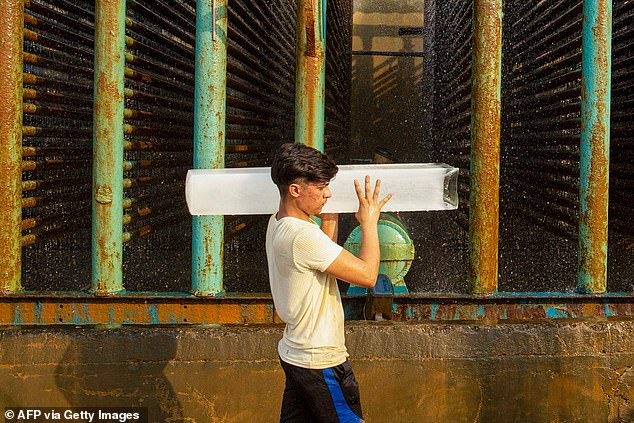 Temperatures in Basra, where a man is pictured carrying a block of ice, have also broken records hitting 53C (127.4F) on Monday and Tuesday

A monitoring station in Houch al-Oumara, in Lebanon’s Bekaa Valley, recorded 45.4C on Tuesday, which if confirmed would be a record for Lebanon which is struggling with a national electricity shortage prompted by low fuel supplies and an economic crisis.