Heavy drinking can treble the risk of getting dementia

Drinking too much can treble the risk of developing dementia, a major study shows.

Academics for the first time have established alcohol as the single biggest way that people can raise their dementia risk.

Their study of 32million patients, of whom 1.1million had dementia, found a particularly strong link between alcohol and the early-onset form of the condition.

An astonishing 39 per cent of patients diagnosed with dementia before the age of 65 had signs of brain damage linked to alcohol, the scientists found.

For those diagnosed at a later age the risk was smaller, with 3 per cent of cases linked to alcohol.

Research by the Translational Health Economics Network in Paris has revealed that people who drink to ‘chronic’ levels were 3.35 times more likely to develop dementia at any age

But overall, people who drink to ‘chronic’ levels were 3.35 times more likely to develop dementia at any age compared to more moderate drinkers.

The French researchers analysed hospital records, meaning patients had to have been diagnosed with an alcohol problem to have been defined as chronic drinkers.

But the findings may also apply to drinkers who breach the World Health Organisation limit for chronic consumption. For men, the limit is 7.5 units a day or about three pints of beer, while for women it is five units a day or four small glasses of wine.

The paper is the first major study to look at the link between alcohol and dementia, the Lancet Public Health journal reports.

Genetics remains the main cause of dementia in the overwhelming majority of cases, but experts are increasingly aware that lifestyle choices can raise the risk.

Lead researcher Dr Michael Schwarzinger called on governments to introduce tough measures to reduce the risk. He said: ‘A variety of measures are needed, such as reducing availability, increasing taxation, and banning advertising and marketing of alcohol, alongside early detection and treatment of alcohol use disorders.’ The academics said alcohol attacks the brain in a number of ways, leading to permanent structural and functional damage.

It also raises the risk of head injuries, stroke and heart problems, which in turn can lead to increased dementia risk. More than 850,000 Britons are thought to have dementia, with rates expected to soar in the coming years as the population ages.

Professor Robert Howard, expert in old age psychiatry at University College London, said: ‘What is most surprising is that it has taken us so long to recognise that alcohol misuse and dependence are such potent risk factors for the development of dementia. 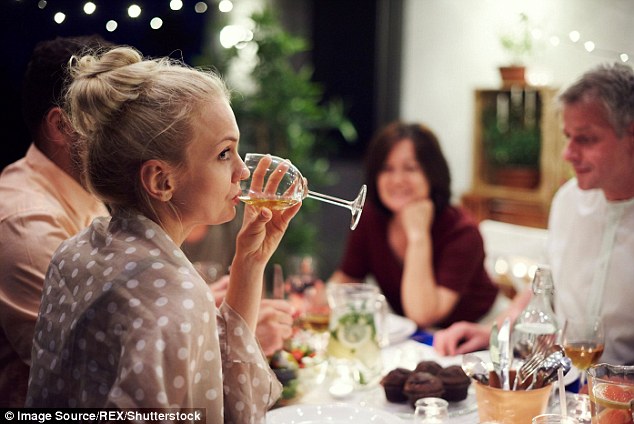 Genetics remains the main cause of dementia in the overwhelming majority of cases, but alcohol is the biggest lifestyle risk

‘Surprisingly, we’ve not traditionally considered alcohol and its misuse as an important risk factor and we were clearly wrong not to have done so. This has huge public health implications for the prevention of dementia, for which we have no current cures or significant treatments.’ Dr David Llewellyn, of the University of Exeter, praised the ‘thought-provoking’ study but stressed other factors may be at play, adding: ‘Reducing heavy drinking may not reduce dementia risk or delay its onset.’

The findings come after researchers warned last month that heavy drinking had become one of the biggest causes of severe illness among the middle-aged.

Alcohol is now the sixth most common cause of disability among people in their 50s and 60s, up from 16th in 1990.

Dr Tony Rao, of King’s College London, said a middle-class culture of drinking wine at home was driving the problem.

He said: ‘The baby boomers grew up in a post-war world where there were much more liberal attitudes to alcohol and less attention paid to health risks. That has now transplanted itself into later life.’

Dr Doug Brown, of the Alzheimer’s Society, said last night: ‘The study doesn’t change the advice to stick to no more than 14 units a week. Anyone concerned about heavy drinking should visit their GP to discuss ways of cutting down and the support on offer.’

Dr Sara Imarisio, of Alzheimer’s Research UK, added: ‘Previous research has indicated even moderate drinking may have a negative impact on brain health and people shouldn’t be under the impression that only drinking to the point of hospitalisation carries a risk.’