Three riot police officers were filmed dragging a laundromat worker out of his van and arresting him after they realised he was double parked.

The man from Hong Kong was delivering fresh linen to a restaurant at the time and had stopped his car across two lanes, according to local media.

Riot officers responded to the incident on Sunday afternoon, and threatened the man with a parking ticket.

Footage of the incident, which occurred at 12pm on Sunday, shows the moment the man was arrested after refusing to cooperate.

He is reportedly still in custody.

The driver got back in his van after a brief altercation with the police on the side of the road, but was promptly dragged out and thrown to the ground by the three riot officers.

A fourth officer approached as two men slammed his head into the asphalt and cuffed him.

Local police confirmed to local media the man was arrested for “obstructing the police in the execution of their lawful duties.”

Footage of the incident, which occurred at 12pm on Sunday, depicts the moment the man was arrested after refusing to cooperate

He remained in custody while the incident was being looked into by Sham Shui Po police district’s criminal investigation team.

The video has surfaced on social media, with some saying the police were too tough on the employee.

‘What kind of world is the policemen like this? You bully the citizens,’ another added.

Meanwhile, others thought the police were soft on the offender.

‘Hong Kong Police Force are not well trained as they take too long to arrest, lot to learn from US police harsher tactics,’ one man said. 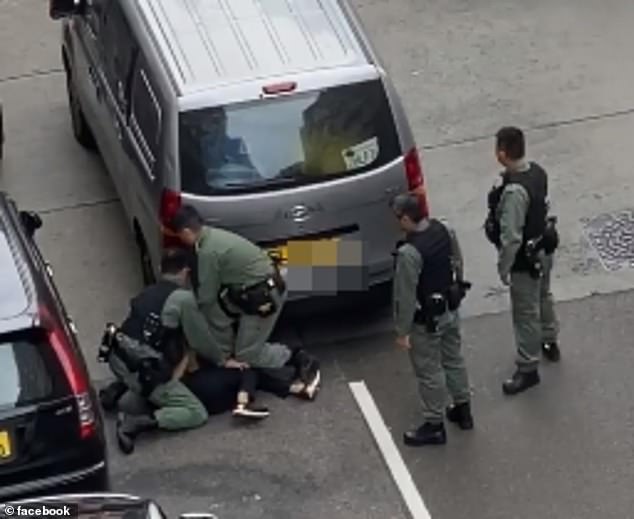