Hector Bellerin has endeared himself to Arsenal fans, it seems highly unlikely he would jump ship

Since Hector Bellerin made his full first-team debut for Arsenal against Borussia Dortmund away in the Champions League in 2014, he certainly hasn’t looked back.

After a troublesome start against Dortmund’s fearsome attack in a 2-0 defeat, Bellerin shook that daunting experience off to become a mainstay in the Gunners defence.

Just under six years on and the Spanish right back has gone on to make over 200 appearances for the club and become a fan favourite at the Emirates – thanks to his impressive work both on and off the pitch. 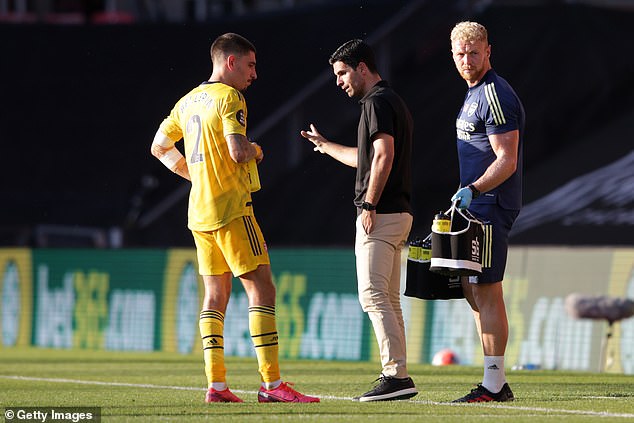 Unfortunately in recent times, injuries have derailed his career in north London and there have been some worrying signs that his problems have caught up with him.

Bellerin was ruled out for 240 days with a cruciate ligament rupture between January 2019 and September 2019 and it took him plenty of time to recover after that.

But after staging a comeback, the Spaniard then sustained a hamstring injury not long after in December which kept him out for another month-and-a-half before the coronavirus pandemic halted his return to full fitness.

Following the restart in June, Bellerin appeared to struggle with the pace of the game but in recent appearances, he has slowly but surely looked like he is returning to full throttle.

But alarming reports from Germany on Monday emerged that the 25-year-old is ready to quit Arsenal after being left ‘unsatisfied’ following another disappointing season at the Emirates – with a fourth consecutive campaign without Champions League football awaiting the club.

So could Bellerin – who joined Arsenal as a youngster at the age of 16 in 2011 from Barcelona’s famed La Masia academy – really be on his way out?

Since joining from Barcelona nine years ago, Bellerin has picked up quite the affiliation with the club and it holds a special place in his heart – with Arsene Wenger providing him with the opportunity to flourish and shine in the first team, developing him from a winger into a full-back.

And since being given his opportunity, the Spaniard has won the support from the Arsenal faithful after nailing down the right back position. His darting runs forward and ability on the ball have always been his main strengths, while his pace has allowed him to recover at the back.

In 2016, after impressing for the Gunners, he had been linked with a return to Barcelona but he quickly quashed those rumours by putting pen to paper on a new six-and-a-half year contract at the Emirates – endearing himself to Arsenal fans even further for showing the loyalty they crave. 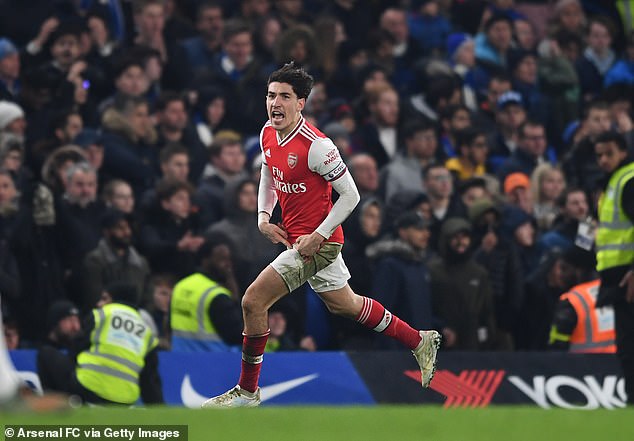 But while Bellerin has been leading by example on the pitch, off it he has been equally as impressive and has become one of the more vocal footballers in the Premier League.

Many footballers opt to keep themselves to themselves and let their football do the talking but Bellerin has taken a different route and has become an inspiring role model for the younger generation.

He is well-renowned for his environmental work, most recently pledging to plant 3,000 trees every time Arsenal won before the end of the season after partnering with global charity One Tree Planted.

‘As a child growing up in Barcelona, I spent a lot of my time with my grandad in his garden planting trees and playing in forests so it’s an issue very close to my heart,’ Bellerin told One Tree Planted’s website.

‘When I saw the great work that One Tree Planted do, not just the planting of the trees but within the communities as well, I knew it was something that I wanted to get involved in. I hope that by doing this and using my platform, others will see how important it is to look after our world and donate to a cause which really affects us all.’

Back in 2016, the Spaniard also became vegan, crediting this move as a major step in helping him reach his full potential. Bellerin previously said: ‘The sustainability of the environment and animal cruelty now motivate me just as much as health … knowing I’m doing the right things makes me really happy to be vegan.’ 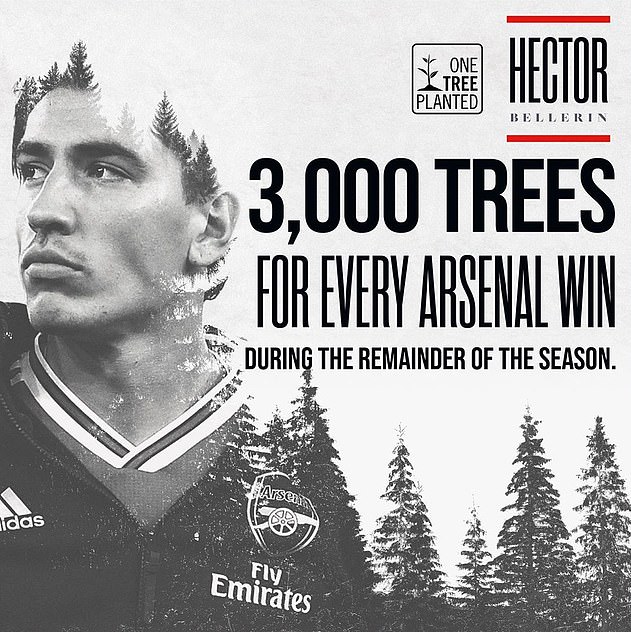 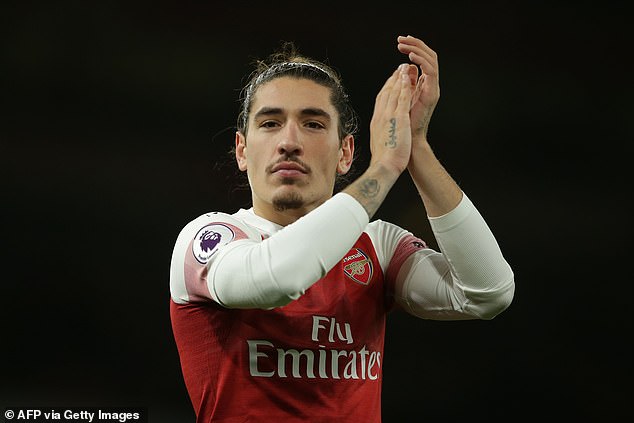 And his work off the pitch doesn’t stop there. In 2017, Bellerin pledged to donate £50 to the victims of the Grenfell Tower fire for every minute he played of Spain’s Under-21 European Championship campaign.

There came a time when his character was questioned by the Arsenal supporters, with some fans fearing his love for fashion was taking the gloss away from his performances on the pitch.

But over time he has garnered more and more respect, and the brilliant charitable work certainly hasn’t gone unnoticed and this has become a major component into why so many at the club  – both on the inside and outside – hold him in such high esteem.

While he may not seem the most natural of leaders, his influence at the club cannot be under-estimated and when Unai Emery faffed over who would be made captain when he was in charge, Bellerin was the prime candidate in many fans’ eyes.

But fast forward to the present day and his future appears uncertain after growing disgruntled with life at Arsenal, according to reports from Germany.

While it might be argued that the 25-year-old is looking to leave as he gets ready to enter his peak years, it seems highly unlikely that he would abandon ship at this present time. 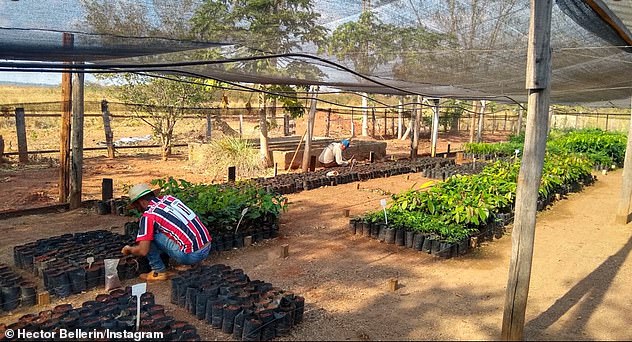 Bellerin has planted his first trees after pledging to grow 3,000 for every Arsenal win

Mikel Arteta has just entered the fray and is looking to usher in a new era in north London, and following his injury hell, surely he will want to repay the faith shown in him considering his affiliation to the club.

And would one of Europe’s top clubs realistically come in for the Spanish full-back if they knew his career may be hindered by injuries? It would come as a huge surprise if Bellerin was to depart the place that has become his home.

But it must be highlighted that if he was to stay at the Emirates, Bellerin’s position is arguably under real threat for the first time since making the spot his own.

For years, there was a lack of competition for Bellerin at right back but now injuries appear to have caught up with him somewhat, Cedric Soares has put himself into the running.

And for the Gunners to tie down 28-year-old Soares to a four-year contract, perhaps they view him as a real contender for Bellerin’s position, while Ainsley Maitland-Niles will continue to be used there as cover. 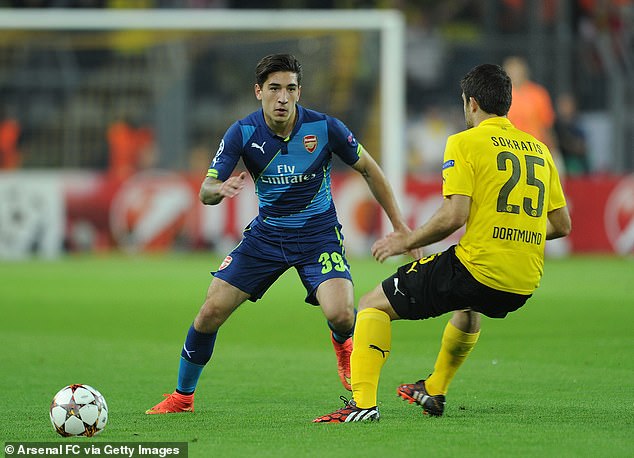 Arsenal are aware that Bellerin realistically isn’t likely to play every game – especially considering the demands if he is deployed as a wing-back – so perhaps they have already planned for the future.

However, if he manages to show that injuries aren’t hampering his game any longer, like he did when he impressed against Leicester and then for the majority of the game at Tottenham on Sunday, then he still is the stand-out candidate for the Gunners on the right flank of defence.

And with Scotland international Kieran Tierney – who has shone since the Premier League restart – on the left side of defence, the Gunners certainly would have a fearsome full-back/wing-back unit at their disposal.