Hospitality firm Whitbread has caved in to investor pressure and agreed to spin off Costa Coffee as a separate business.

The Premier Inn owner, which is valued at around £8billion, will list Costa on the stock exchange following an assault by two activist investors who took a stake in the firm to push for a break-up.

It means the world’s second-largest coffee chain will become a standalone business with its own management and shares, while Whitbread will focus on expanding its budget hotel empire and restaurant businesses such as Brewers Fayre and Beefeater.

Whitbread, which is valued at around £8bn, will list Costa on the stock exchange following an assault by two activist investors who took a stake in the firm to push for a break-up

Costa is keen to put its drive-thru and express machines into more shops and motorway service stations. And Premier Inn wants to expand in Germany.

Rumours that there might be a split emerged last autumn when bankers Credit Suisse said that Whitbread could spin off Costa, and in doings so provide better returns for shareholders.

Whitbread chief executive Alison Brittain had refused to rule out a restructure and yesterday denied that her arm was forced by the hedge funds.

She said: ‘Whitbread has been discussing this for two-and-a-half years and I’ve been quite open about that in the market.

‘There isn’t anything that the activists have done to make us do anything differently, we’re doing exactly what we had always planned to do and we’re doing it in the order we think is best for the business.

‘What the arrival of the activists has done is cause an awful lot of commentary and discussion and therefore an awful lot of uncertainty for everybody. So it did cause us to come out today and be definitive.’

The split is likely to take up to two years. But Elliott Advisors, Whitbread’s largest shareholder, wants it done in six months.

Typically, splits of this size take an average 23 weeks. Consumer goods group Reckitt Benckiser took 21 weeks to spin off its Indivior business in 2014, while Carphone Warehouse’s demerger of Talk Talk in 2010 took 49 weeks.Brittain, 53, said Whitbread wants push on with plans to save £250million in two years. 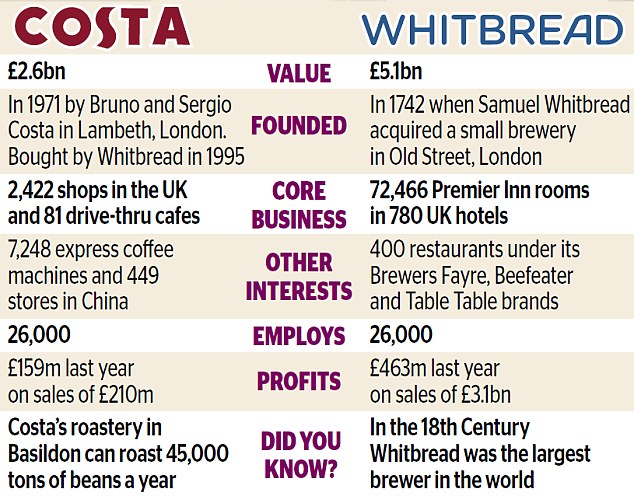 She said: ‘Our focus is on optimising the timing for shareholder value and ensuring we don’t risk destruction of value.

‘It allows us to complete what is an enormously complex IT transformation and infrastructure programme which is delivered by shared Whitbread resource, not by individual companies.

‘If it can happen before April 2020 then that’s great, but we really want to make sure that each business is in the strongest position to create further value as separate entities.’

Brittain said it will also give the new Costa business time to appoint a new management team, tax advisers, IT team and support centre, as these currently run across both businesses.

She will take over the helm of Whitbread after the separation.

But analysts warned the move could trigger a bidding war.

Morgan Stanley said: ‘A demerger could trigger takeover interest in Costa given coffee is a high-growth market and Costa is the world’s second-largest coffee shop chain.’

‘The split could ultimately lead to a shake-up of the top brass, unless the executives are willing to accept the reduced earnings potential running a smaller company probably entails.’

Meanwhile, Whitbread reported its full-year results, which showed revenue grew by 6.1 per cent last year to £3.3billion while profits increased 4.5 per cent to £622million.

To cut costs Whitbread is shaking up its UK business by moving its attention away from the struggling High Street and opening more coffee machines in petrol stations and drive-thru cafes.

It is also growing Premier Inn and Costa overseas and opening more hotels in Germany and hundreds of cafes in China, and improving its technology.

Split Was Brewing For Months

Rumours of a split at Whitbread have been brewing since October when Credit Suisse suggested Whitbread could boost returns for shareholders by spinning off Costa Coffee.

In December, reports of a demerger were sparked again when New York hedge fund Sachem Head took a 3.4 per cent stake in Whitbread.

While Sachem never publicly outlined its goals, its presence was enough to set tongues wagging.

Earlier this month vulture US hedge fund Elliott Advisors stuck its claws into Whitbread, buying a 6 per cent stake, making it the largest shareholder.

Whitbread’s shares are up almost 10 per cent since Elliott weighed in.

The firm, owned by billionaire Wall Street investor Paul Singer, is thought to have made £43million from the investment so far.