Heidi Klum, 45, poses with beau, 29, and all four kids at pumpkin patch

Heidi Klum, 45, and Tom Kaulitz, 29, are arm-in-arm at pumpkin patch… before she says her Halloween costume will be ‘very cute, not scary’

Heidi Klum posed with her rock star beau Tom Kaulitz and all four of her kids – Leni, 14, Henry, 13, Johan, 12, and nine-year-old Lou – at the Mr Bones pumpkin patch in LA earlier this week.

The 45-year-old model and the 29-year-old fellow German looked like a longtime couple as they smiled away with the children outside a hut decorated with pumpkins and a skull.

This comes before the America’s Got Talent host said her Halloween costume will be ‘very, very cute’ this year. 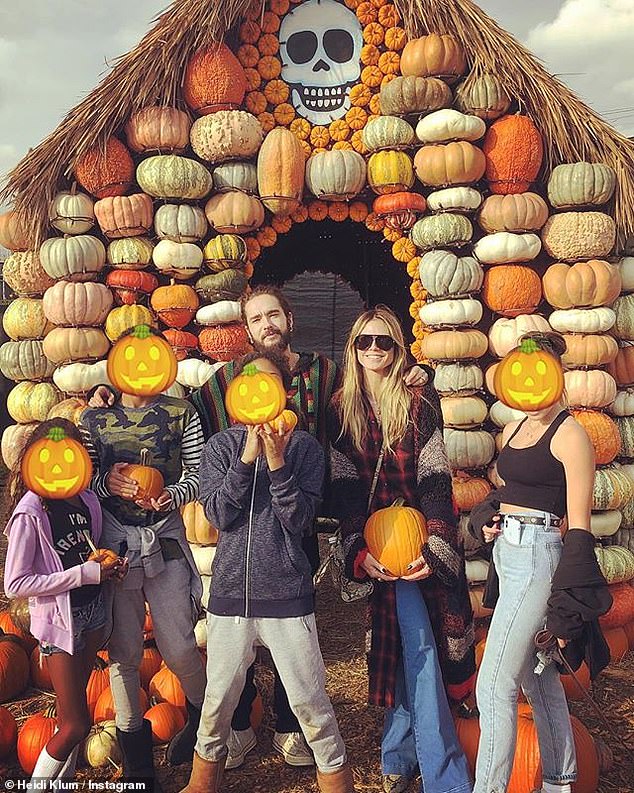 Family day: Heidi Klum poses with her rock star beau Tom Kaulitz and all four kids at the Mr Bones pumpkin patch in LA recently. The 45-year-old model and the 29-year-old fellow German looked like a longtime couple as they posed with all four of her kids

The 45-year-old supermodel is famous for her elaborate outfits on the spooky holiday.

And although she won’t spill all the details, she has promised fans that this year she won’t be dressing in anything scary. 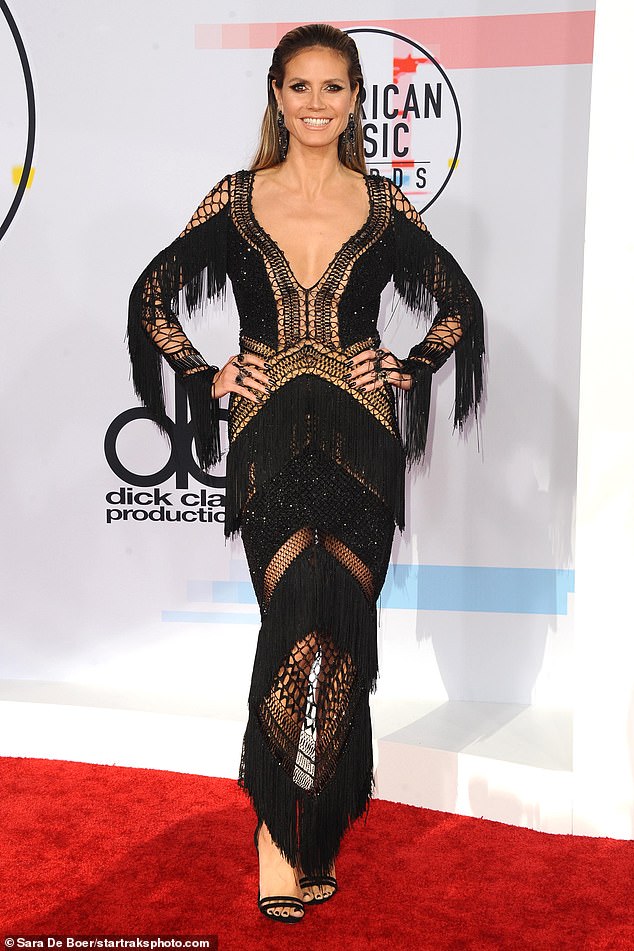 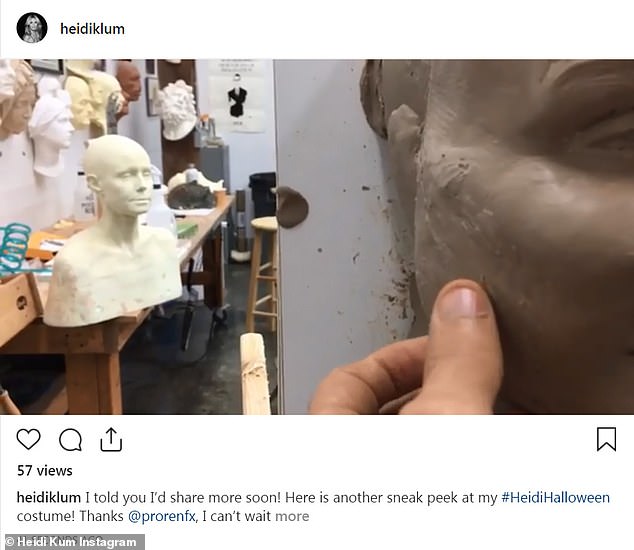 Hints and more hints: The star has already shared a sneak peek on social media

But among those who get a sneak peak of the former Project Runway host’s costume are her four kids because they are often around when her outfit is being created.

She said: ‘My kids know; they always know, they always wonder how it’s done, and I have fittings and people come over when I have to try different pieces on.

‘So a lot of the times they are a part of the process and they see it happen.’ 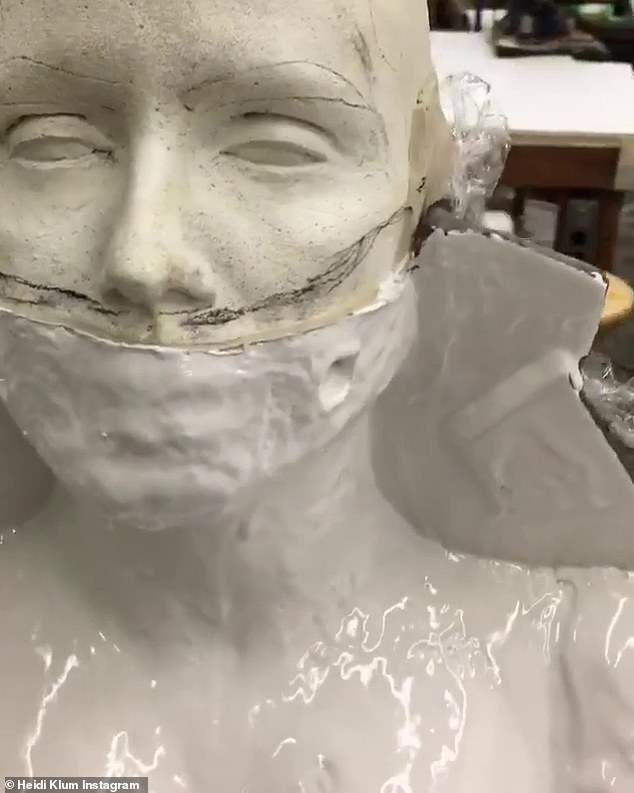 She takes so much time each year: Here is a look at the mold of her face

This year will mark the 19th anniversary of Heidi’s annual Halloween bash and she admitted her costumes have grown more elaborate over the years – which can also be risky.

She said: ‘In the beginning stages, I didn’t know about these [prosthetics] professionals yet and I did my own hair and make-up, and I had some people who would help me put the clothes together.

‘When you do prosthetics and all of this stuff, I’m always having my fingers and toes crossed that it actually does work out on the day because there was no dress rehearsal. 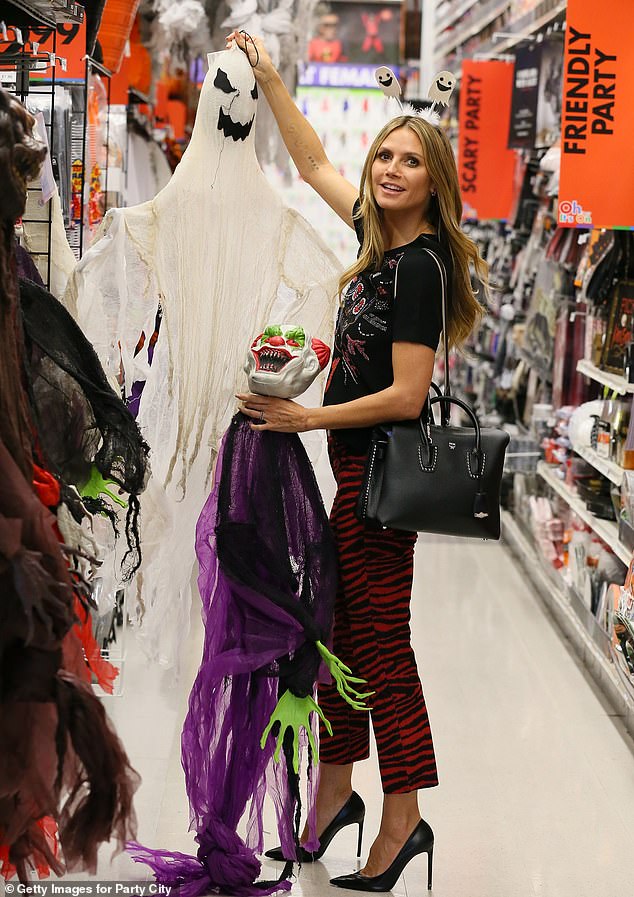 She loves to do it up right: Here the German wonder was seen shopping at Party City in LA last week for a visit to sick children

‘Because we can’t actually glue all these things down and see if it actually really works.

‘So it’s always a bit nerve-wracking for me, too, that it actually does work out in the end. Usually it does, but you just never know until the day comes.’

The blonde beauty – who has appeared last year as a werewolf from Michael Jackson’s ‘Thriller’ video- previously teased fans on social media by posting a picture last month of a mask being specially made in a workshop.