She has been isolating at home since falling ill, amid the coronavirus pandemic, though she eventually tested negative.

And Heidi Klum decided to get in some time outside on Sunday, as she went for a hike with her husband, four kids and two dogs.

The America’s Got Talent host shared videos and pictures from the family outing to Instagram.

Family outing: Heidi Klum decided to get in some time outside on Sunday, as she went for a hike with her husband, Tom Kaulitz and kids Leni, 15, Henry, 15, Johan, 13, and Lou, 10 as well as their two dogs

Heidi, 46, posed with her family for a self-timer selfie among tall grass and a dirt path.

The entire family took safety precautions of wearing face masks as Los Angeles now requires coverings when in public to limit the spread of the coronavirus.

Heidi also covered up in a beige knit beanie, and golden hued sunglasses, as she wore a blue wind-breaker jacket for the outing. 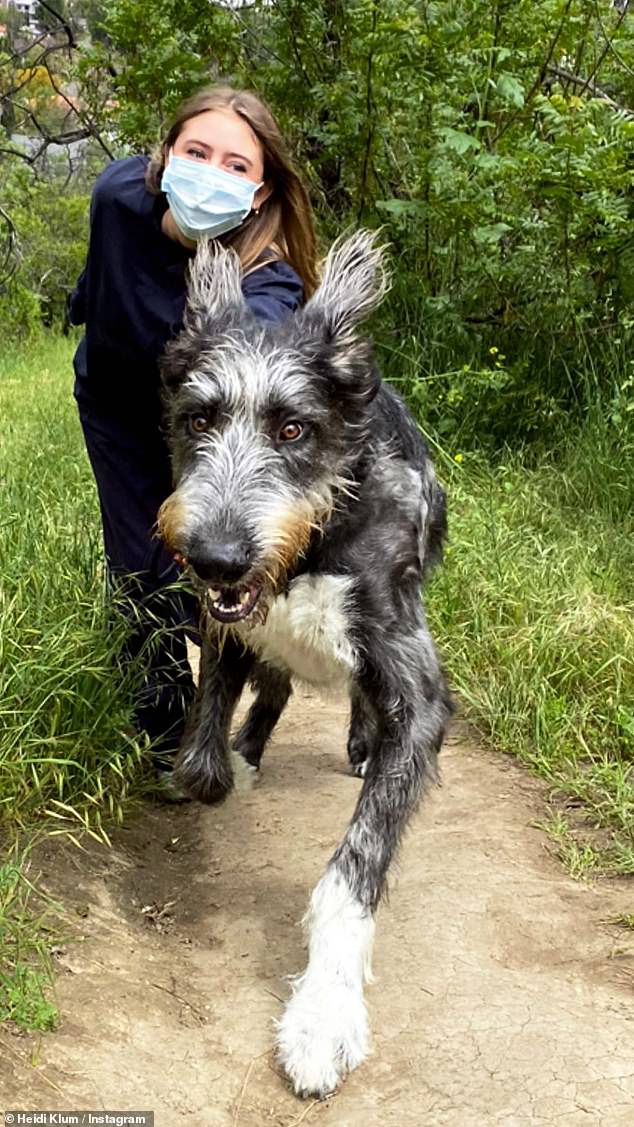 Following: In another snap her eldest Leni chased behind the dog in a grassy area

Lou, was closet to the camera and showed off her grey and blue crossbody bag and black leggings.

Tom was a pop of color in the background, wearing a bright yellow sweatshirt, dark blue cap and opting for a black bandana face mask, as opposed to the blue medical face masks the others wore. 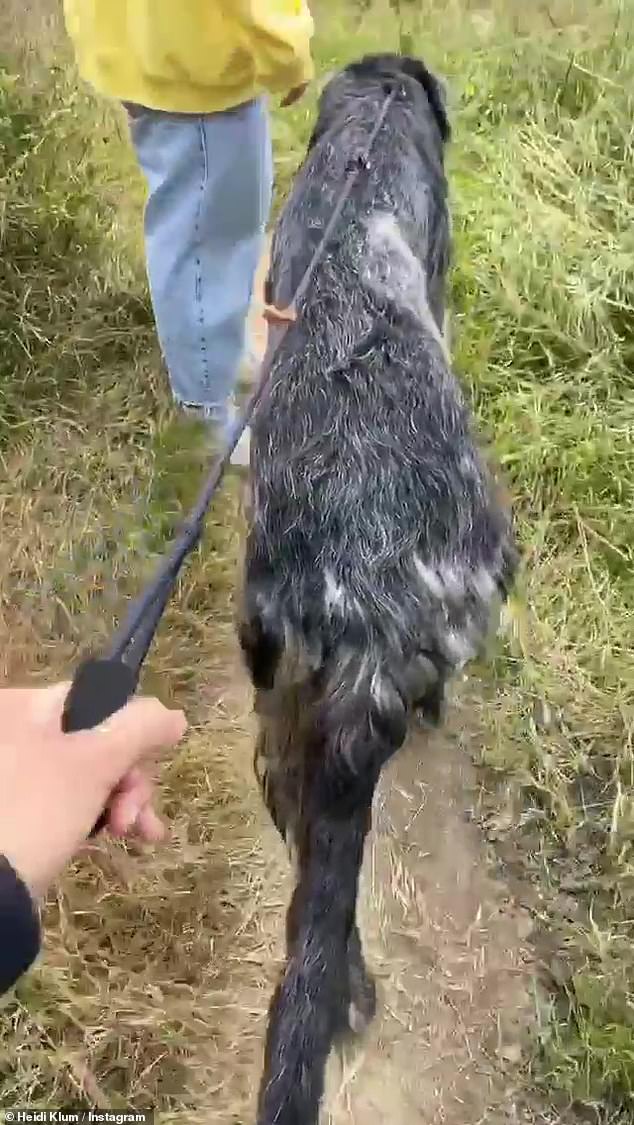 Take the lead: She also shared videos to her Instagram stories walking one of her large black and grey dogs, following behind her husband

She also shared videos to her Instagram stories walking one of her large black and grey dogs, following behind her husband.

In another snap her eldest Leni chased behind the dog in a grassy area.

Speaking in a joint interview earlier this month with her Making the Cut co-host Tim Gunn, Heidi told People magazine, Leni wants to follow in her model footsteps.

‘The only one so far who wants to step in my footsteps is my oldest daughter, Leni. [But] I’ve never pushed [my kids] to do anything,’ she said. 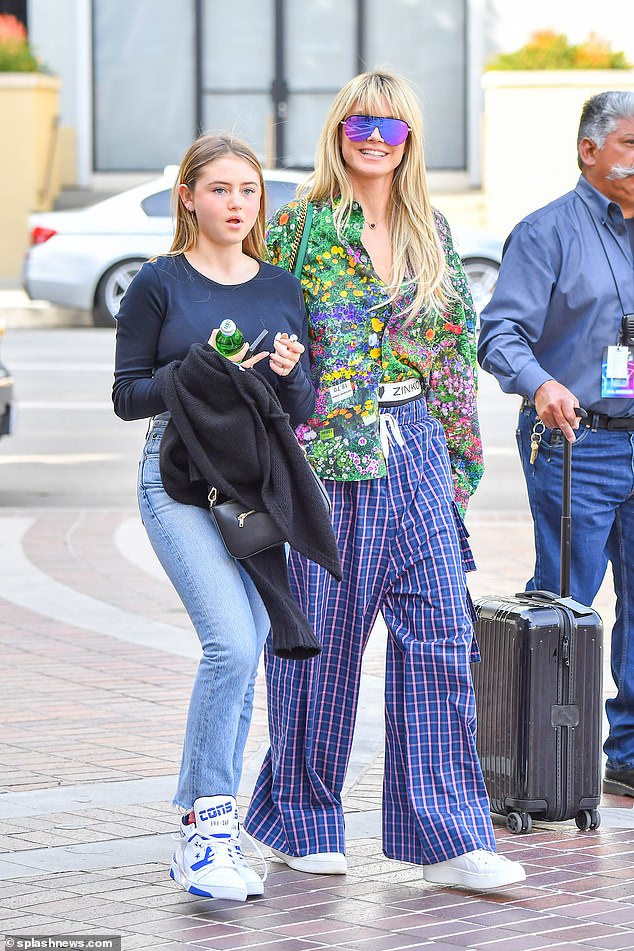 ‘Let me take this over’: Earlier this month, Heidi revealed Leni is keen to take over her mother’s reign as a fashion superstar (pictured 2020)

‘She just started where she said, “Okay, move over. Let me take this over.” It’s definitely a ruthless business. It’s also changed a lot over the years. It was very different when I started in 1992.’

And Tim – who is a longtime friend of Heidi – can’t believe how ‘beautifully behaved’ Heidi’s brood is, as he says he feels ‘reassured’ about the ‘future of humanity’ whenever he sees her children.

He explained: ‘I hope they think of me as an uncle. I’ve known them since they were infants and it’s been wonderful watching them grow up.’ 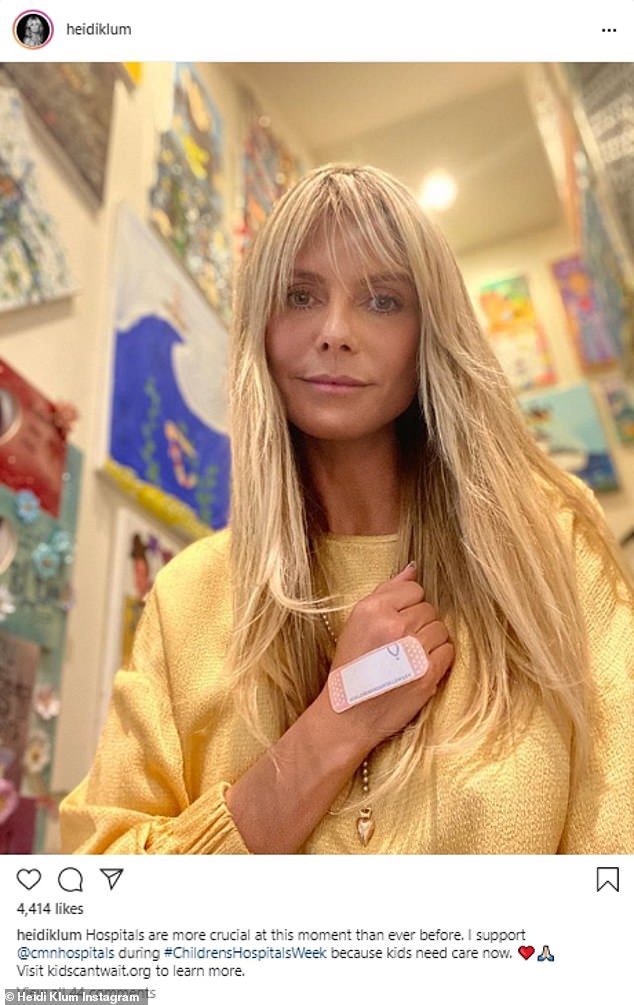 Support: Earlier in April, Heidi supported Childrens Hospitals during the coronavirus pandemic ‘Hospitals are more crucial at this moment than ever before. I support @cmnhospitals during #ChildrensHospitalsWeek because kids need care now’ 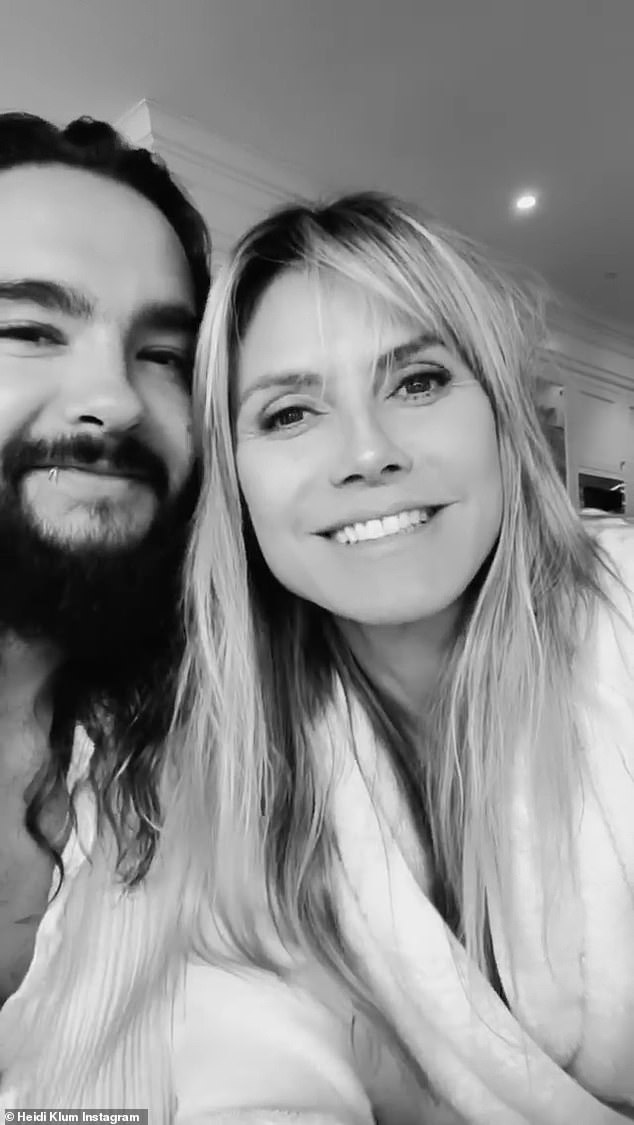 The supermodel shares her four kids with her ex-husband Seal, who she was married to from 2005 until 2014.

Though Leni was adopted by Seal in 2009, and Heidi has said he was present for her birth, her biological father is Flavio Briatore.