Heidi Montag-Pratt looked stunning as she she showed off her pregnancy belly while on vacation in Hawaii on Sunday.

Hot mama: Heidi Montag put her baby bump on full display while on vacation in Hawaii on Sunday

She wore her tie side bottoms positioned just under her baby bump, which proved flattering on the expecting mother. 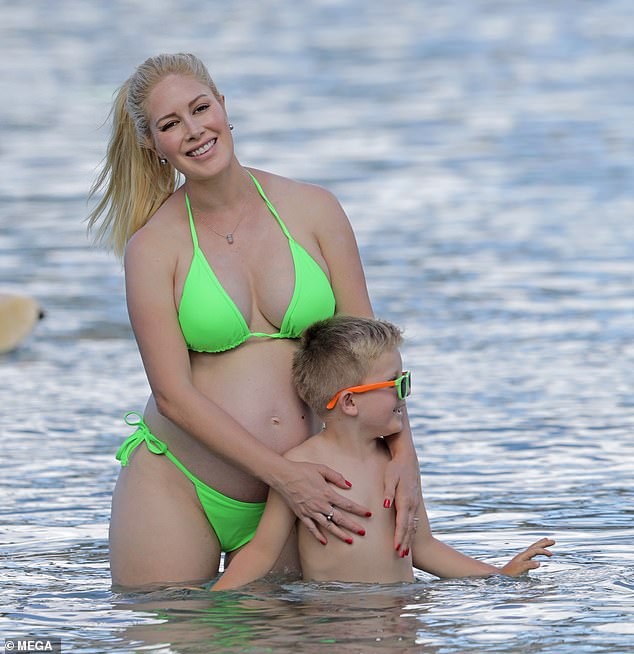 A mother’s love: The beauty  devoted much of her time at the beach to playing with son Gunner Pratt

Montag frolicked in the ocean and around the Hawaiian resort with her firstborn.

Seen in sunglasses that matched his mother’s neon swimsuit, Gunner and Montag looked to be enjoying on another’s company as they spent quality time together.

Ever a doting mama, Montag who has hit the five and half month mark of her pregnancy, threw her hair in a ponytail and wore a protective quartz crystal around her neck as she played with her young son in the tropical paradise. 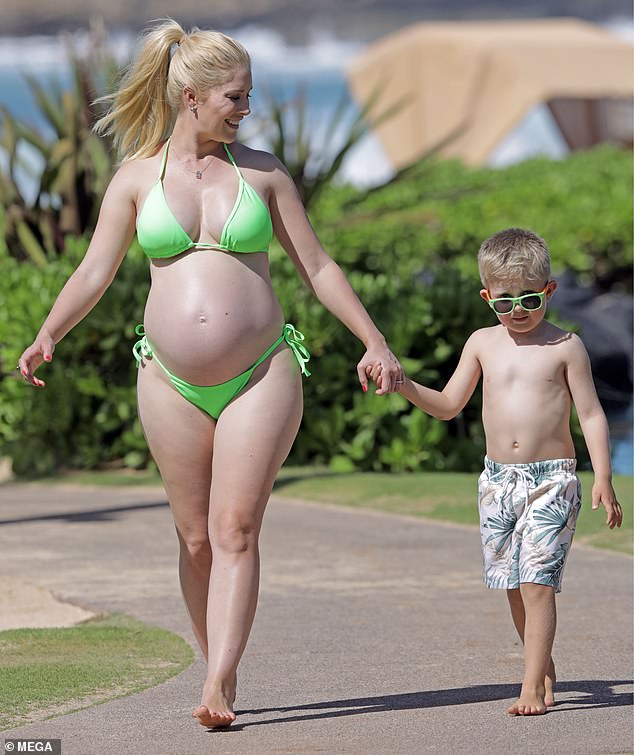 Hand in hand:  a doting Montag smiled from ear to ear as she hit the five and a half month mark in her pregnancy while on vacation

Montag and Pratt were spotted capturing pictures for their own photo album memories.

Montag posed for the birthday boy as he took pictures of her holding her belly.

The couple, who met and fell in love while filming MTV reality show The Hills in 2006, married in 2008 and is still going strong fourteen years after their very public nuptials.

In July, the beauty admitted she was hoping for a girl but her son is thrilled to be getting a baby brother. 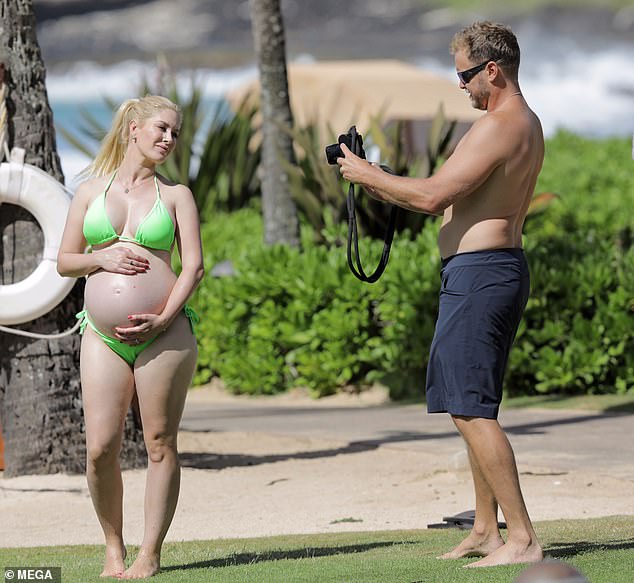 Making memories: Montag appeared to be a pillar of strength and beauty as she awaits the arrival of her second child with crystal entrepreneur Spencer Pratt

Heidi added: ‘Growing up I always wanted boys and then recently, I kinda started thinking, I don’t know, I kinda want a girl and having one of each.

‘For Gunner, he really wants a brother, so, you know, ultimately I want what would be the best for him and his life.’

The couple had struggled to conceive before and will be happy as long as they have a healthy child.

Spencer said: ‘As long as a human is in her belly, that’s a win. ‘We’re way past worrying about a gender in my brain. Thank you, God, there’s a baby here.’

The Hills’ star admits she started blaming herself for their fertility challenges.

‘I felt like it was, like, my fault … It was really hard to feel like you want something so bad and it’s just not possible … There’s nothing else I could have done. 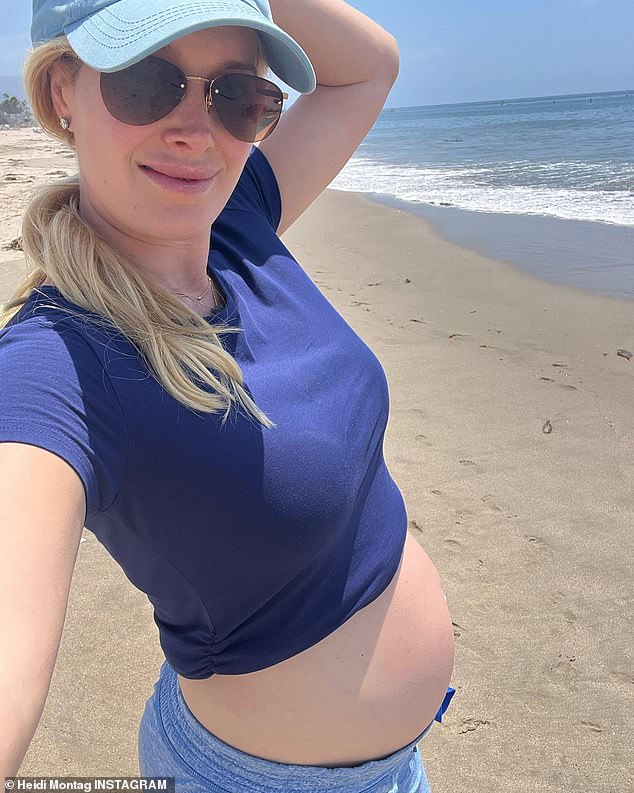 Beach babe with a camera: Last month she shared this image where she had on a blue crop top and gray pants

‘I felt like I was older. I felt a little bit maybe broken down with it. I just felt like maybe I missed an opportunity, maybe I made a bad choice.’

Heidi went to extreme lengths to try and get pregnant – including eating raw meat.

She said previously: ‘I was eating bison hearts and raw meat and lots of liver. And I got on an animal-based diet and I had all my blood work done and I donated a bunch of blood. Toward the end, I was really on an animal-based diet, which is mostly meat so I really eliminated most vegetables because they say there’s oxalates and toxins that could really interfere with [pregnancy].’

The former Celebrity Big Brother star also eliminated most fruit from her diet and found a ‘great lubricant’ to increase her chances of pregnancy. 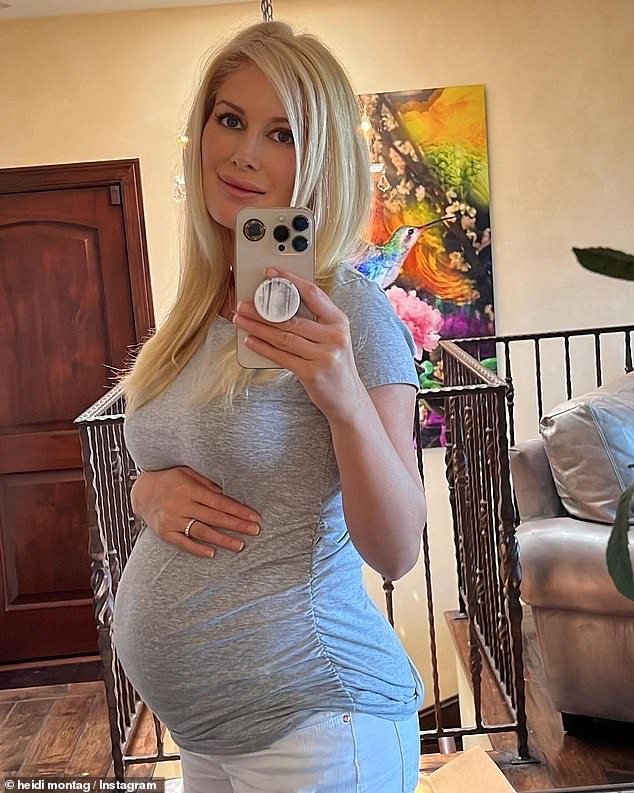 Hard work: The couple had struggled to conceive before and will be happy as long as they have a healthy child. Spencer said: ‘As long as a human is in her belly, that’s a win. ‘We’re way past worrying about a gender in my brain. Thank you, God, there’s a baby here’

She said: ‘I had minimum fruit, I basically had no grains and was on a few supplements. And then I also found a lubricant that’s supposed to be great for fertility. And all that came together with God’s timing and I got pregnant.’

Heidi went on to explain that in the run-up to discovering she was pregnant, she had in fact stopped taking pregnancy tests and was ‘shocked’ to discover that she was expecting when her period was late.

She said: ‘I decided to stop taking pregnancy tests because I was so disappointed every month that I wasn’t pregnant. So I just thought when I was late I’ll wait another day.

‘Then, I waited the next day and I went downstairs, like, ‘I’m just gonna take the pregnancy test.’ So I took my Clear Blue pregnancy test and I saw I was pregnant. I couldn’t even believe it. I was shocked! I was crying. I ran upstairs like ‘Spencer, it says pregnant!’ Gunner was like, ‘Why are you crying? What’s happening?’ ‘