‘Held like caged animals’: Inside the grim watch houses where children are held alongside pedophiles

Children as young as 10 are being held in police watch houses alongside convicted paedophiles in Queensland because the state’s youth detention centres are full.

The extraordinary facts came to light during an investigation by the ABC’s Four Corners program which has obtained hundreds of documents detailing cases of children enduring lengthy periods in adult holding cells.

‘I’ve seen a convicted paedophile adjacent to cells where children are being held,’ said Queensland public guardian Natalie Siegel-Brown in an interview for the program which is set to air on Monday.

Ms Siegel-Brown expressed grave concerns about children being ‘held like caged animals’ in police watch houses intended for adult offenders, often for weeks at a time.

‘We have significant numbers of kids, from traumatised backgrounds, held like caged animals in concrete pens,’ she told the ABC.

Four Corners has obtained 516 files, including reports to Ms Siegel-Brown’s office, about the treatment of children in Queensland’s criminal justice system.

They detail how kids as young as 10 have been held in watch houses, sometimes in isolation, sometimes in so-called suicide smocks.

More than 70 files related to children who spent 10 or more days in adult watch houses. Two children were held for 33 days or more.

An adult watch-house inmate gives a Hitler salute. Children are being housed alongside adults in police watch houses because of overcrowding in juvenile detention centres

One was an Aboriginal boy who had been deemed permanently unfit to plead and assessed as having the cognitive function of a child aged younger than six.

In another case, a girl was put into a pod with two alleged male sex offenders at the Brisbane City Watch House.

At the same watch house, a different girl was held 25 days, during which time she discovered she was about 11 weeks pregnant. She was later transferred to a youth detention centre.

One human rights advocate told the ABC that the watch houses were where the most dangerous adults in Australia go including murderers and pedophiles, Four Corners said on its website.

Queensland’s youth detention centres are full after state government reforms in February 2018 changed the rules so that 17-year-olds are dealt with in the youth justice system, not the adult system.

This has resulted in children being held for long periods in adult watch houses because there’s nowhere else for them to go. 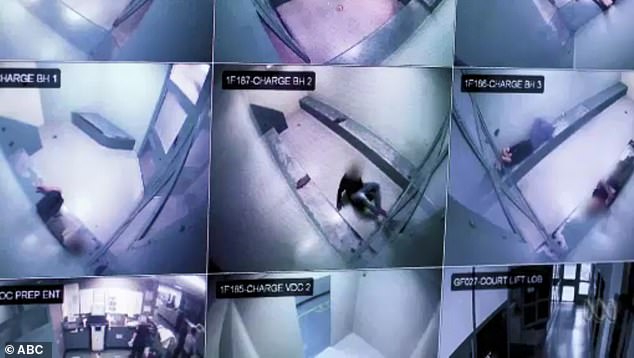 A security-camera view of watch house cells in Queensland, used to monitor inmates including children who are now being held. One girl was held for 25 days at Brisbane City Watch House

Four Corners heard from a children’s advocate who said the watch house environment can be so traumatic that some police officers last only two hours in it.

Last November, the Together union, which represents prison guards, flagged the issue publicly, with spokesman Alex Scott saying there were too many children in the system and that long-term solutions were needed.

‘This is a failure on the part of the government to meet the most basic protections of young people,’ the commissioner said. 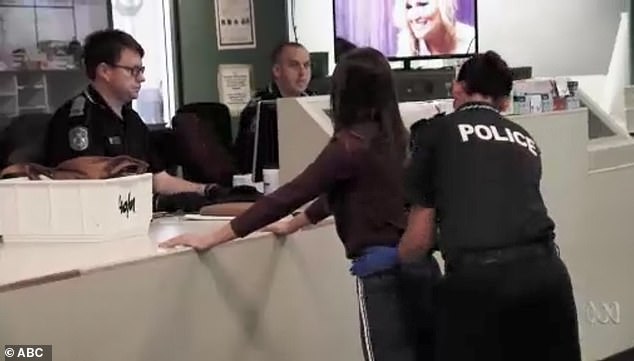 Police searching a woman on admission to a Queensland watch house. Children are now going through this system alongside adults including some as young as 10, Four Corners reports

‘Our focus remains on reducing offending rates and preventing young people ever needing to be place in detention,’ said Child Safety Minister Di Farmer in a release at the time.

‘I don’t like to give a definite date. I would hope by the second half of next year we can see that there are only kids in watch houses who are really just there as the general process of things,’ she told Four Corners.

Queensland’s problems have extended to violent unrest at both of Queensland’s youth detention centres in the last three years.

In November 2016, a cancelled football game sparked a riot among juvenile prisoners at the Cleveland Youth Detention Centre, Townsville.

They injured four staff including one who required eye surgery.

In January 2017, a riot at Wacol Youth Detention Centre, Brisbane, left a staff member with eye injuries after youths armed with mops and brooms went on a rampage and used table tennis tables to climb onto the roof.