Helen Flanagan showcased her toned body and ample assets in yellow lace lingerie on Monday, taking to Instagram to treat her fans with a series of sizzling shots.

The former Coronation Street actress, 31, glowed as she flashed a smile towards the camera, before seductively looking into the distance.

Another shot showed the blonde bombshell holding back her silky smooth locks, which had been tied back in a ponytail allowing for a selection of strands to loosely fall over her face.

Gorgeous: Helen Flanagan flashed her ample assets in a sexy yellow lace bra as she posed up a storm an Instagram post from Monday… five months after giving birth 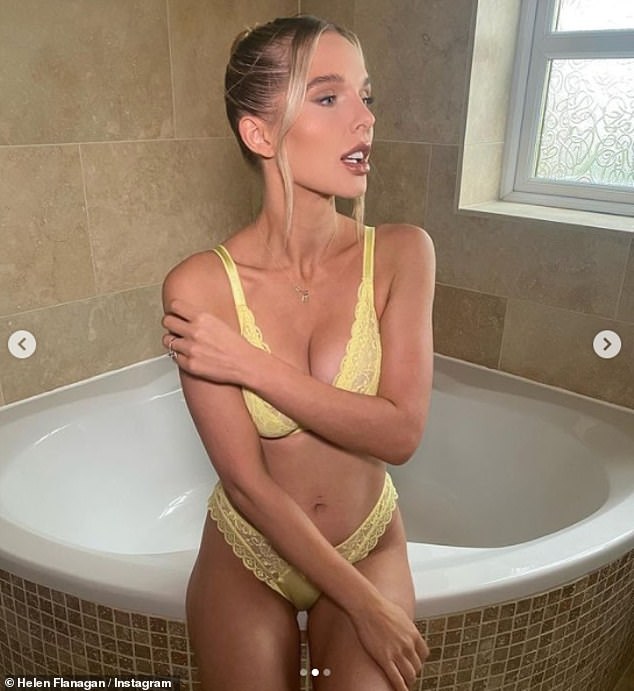 Sizzling: The former Coronation Street, 31, actress glowed as she seductively looked into the distance

The I’m a Celebrity… Get Me Out of Here campmate accessorised her co-ord with a delicate chain necklace, which featured a gold bumblebee pendant.

Helen’s makeup had been applied flawlessly and she donned a shiny caramel lip look, penning ‘Leo season’ as her caption.

Fans and fellow celebs alike took to the comments section to heap praise on the star. 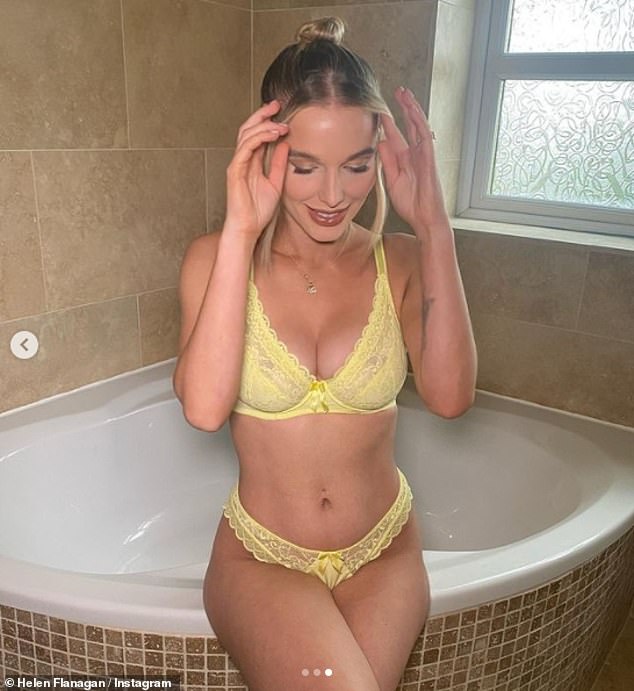 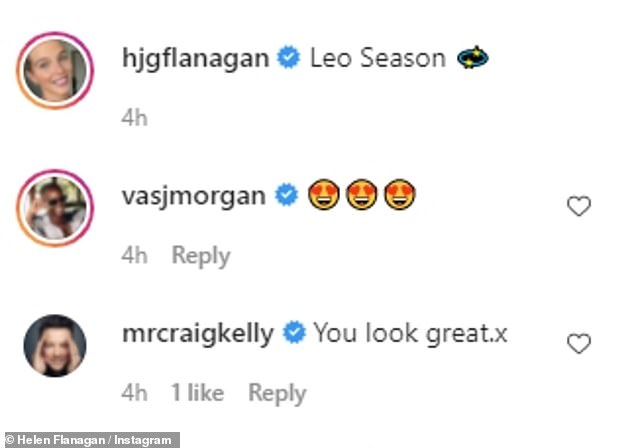 It comes after Helen showed she could balance her birthday plans with mum duties on Sunday as she breastfed her son Charlie while out and about celebrating her 31st.

The Celebrity Antiques Road Trip star looked stunning in a chiffon tiered dress and velcro sandals as she fed her son with ease thanks to the strapless ensemble.

‘Who else really drags out their birthday celebrations? Hope you will always come for lunch with mummy baby boy,’ she captioned the sweet snaps on Instagram. 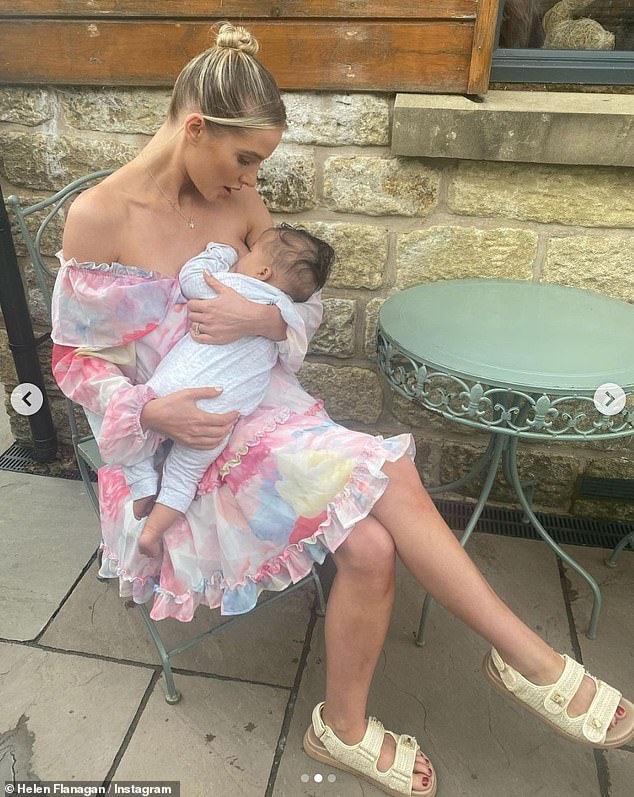 Multi-tasking: Helen showed she could balance her birthday plans with mum duties on Sunday as she breastfed her son Charlie while out and about celebrating her 31st

‘Love this dress from @chichiclothing and super easy for nursing,’ gushed Helen of her outfit, which featured a stylish pastel floral pattern.

Helen, who welcomed her third child with her footballer fiancé Scott Sinclair back in March, looked down lovingly at her son as she sat to feed him on an outdoor table.

She then posed alone to showcase the summer ready long-sleeved dress that she wore with white quilted sandals.

Helen looked stunning at she beamed at the camera and accessorised with a dainty silver necklace. 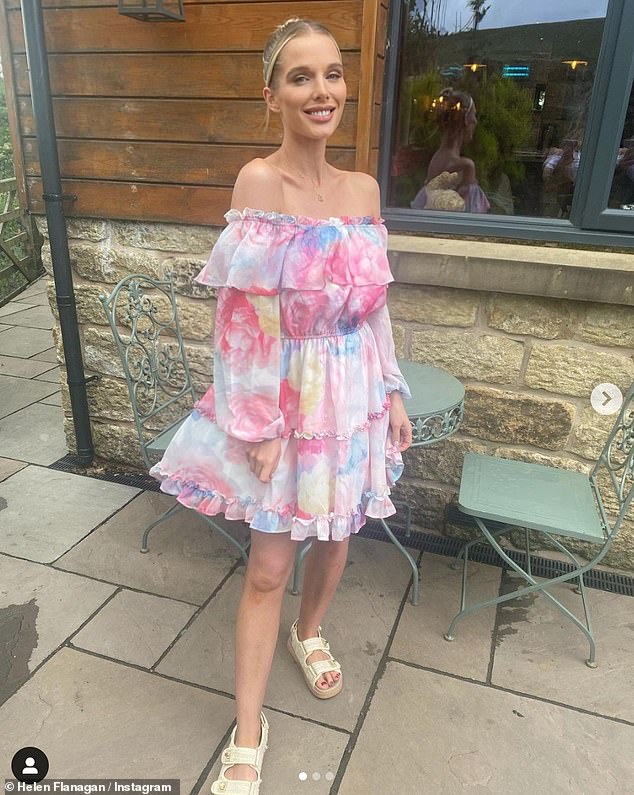 Stylish: Helen looked stunning at she beamed at the camera in the summer ready long-sleeved dress that she wore with white quilted sandals

The soap star wore her blonde highlighted tresses up in a sleek bun and left her shorted layers down to frame her face.

Helen looked pictured perfect as she sported a flawless face of makeup, including lashings of pink brown lip liner.

The birthday celebrations with her son come after Helen revealed last week that she wouldn’t rule out having a fourth child, despite health complications in her last pregnancy. 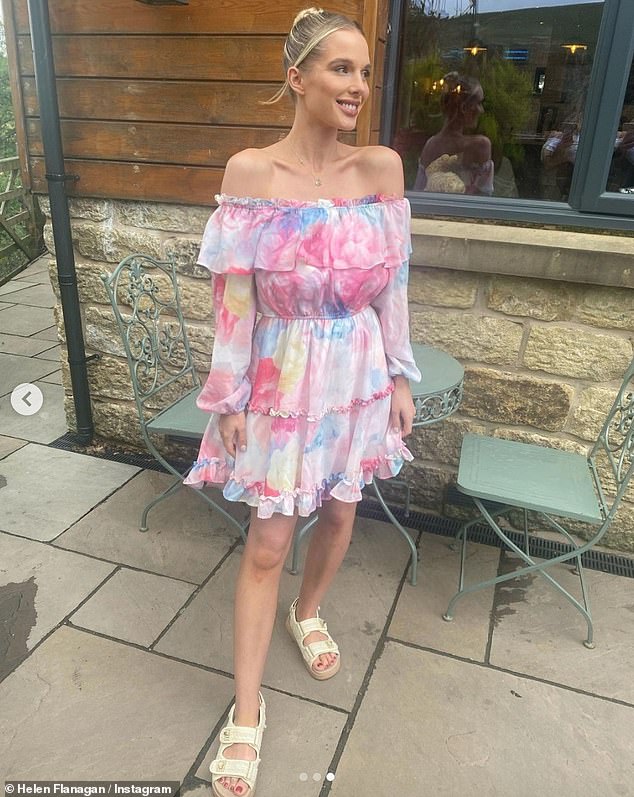 Stunning: The soap star wore her blonde highlighted tresses up in a sleek bun and looked picture perfect in lashings of lip liner

The Bury-born star told the Mirror: ‘I wouldn’t rule out another. I’ve always said in my head I wanted four.’

Despite her last pregnancy causing her to remain bed-bound, Helen is keen to further grow her family with her fiancé Scott.

‘When you feel so dreadful, you do think, “No way, I will absolutely never have another baby”, but as soon as Charlie arrived I just thought, “You’re so worth it,”’ Helen told the platform. 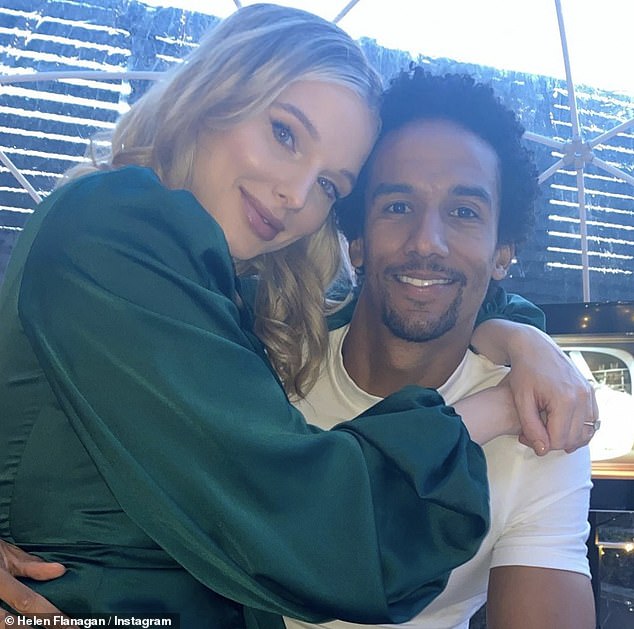 Helen suffered badly with hyperemesis gravidarum during her last pregnancy.

Sharing her experience with the extreme morning sickness, Helen explained on Instagram: ‘It got worse with each pregnancy. It was worth everything but it was horrendous.

‘As soon as I found out I was pregnant with Charlie, I said to my mum I hope I don’t get Hyperemesis. I hope I’m OK.

‘I had to live with my mum and dad for three, four months. I couldn’t look after them. Now I’m not pregnant I feel like a normal mum again, I have loads of energy which is lovely.’

Helen added: ‘I had medication that worked with Delilah but I was just immune with Charlie. You’re constantly sick but it makes you feel low as well, you’re so on your own.’

What is Hyperemesis Gravidarum?

Mild cases of HG are able to be treated with a change in diet, rest and antacids. But more severe cases can force the expectant mother to stay in the hospital so they can receive the nourishment they need.

About 70 to 80 percent of women will experience some form of morning sickness throughout their pregnancy.

But the number of women who suffer from HG is not well known because the majority will often go unreported because they treat it at home or in an out-patient care.

The cause of HG remains unknown, but the severe nausea is believed to be due to the rise in hormone levels in the women’s body as it changes to house the growing fetus.

HG symptoms typically start during the first trimester at the four to six week mark and peak when the woman is nine to 12 weeks along.

While most women will experience relief as the enter their second trimester at 14 weeks, some will have severe nausea throughout the course of their pregnancy.