What a gem: Helen Mirren with a diamond and platinum pendant during our interview

Helen Mirren sipped a flute of Krug champagne as she talked about love, lust, and the aphrodisiac qualities of power.

‘Power is very attractive,’ she purred, as she toyed with the Belle Epoque diamond and platinum pendant around her neck.

We had met to discuss her lively portrait of Catherine the Great in Sky Atlantic’s lavish, four-part drama about the Russian Empress who enjoyed her conquests, military and romantic. (The first episode is broadcast next Thursday, October 3.)

‘She was sexy, and had a healthy appetite,’ Mirren said, admiringly, of her character. She paused for a moment and took another sip of Krug. ‘To my mind, because I’m a child of my own culture, there’s always that sense of “Oh, I’m not quite sure that’s really the way to behave” — except, of course, in one’s own life. I felt it was my right to have affairs, and be in love with people, and to live with them. I’m a bit like Catherine. 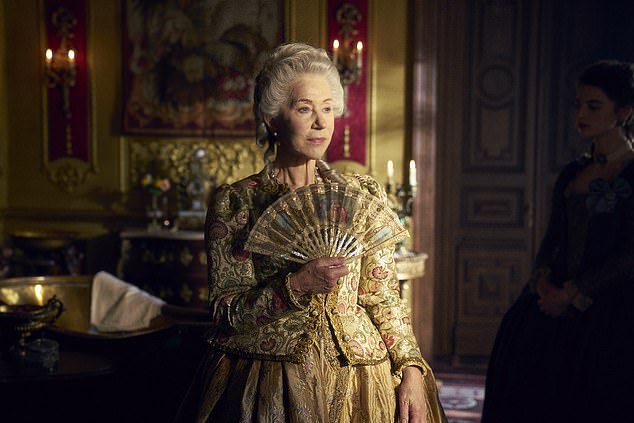 Helen Mirren stars as Catherine the Great in Sky Atlantic’s lavish, four-part drama about the Russian Empress who enjoyed her conquests, military and romantic 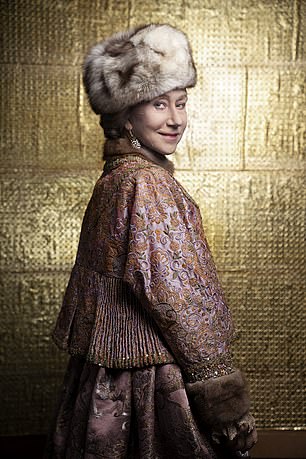 ‘She was sexy, and had a healthy appetite,’ Mirren said, admiringly, of her character

‘I’ve had probably three or four serious lovers. I was serially monogamous until I met my husband. And now I’m just monogamous,’ said the star, whose lovers included Liam Neeson, before she married the ‘love of my life’ director Taylor Hackford, 22 years ago.

‘Catherine would cast her eye across a man and say: “Maybe I’ll have him.”

‘If Catherine was a man — say, Henry VIII — you absolutely wouldn’t mention it. But because it’s a woman, she exposes all those prejudices and male hypocrisies.’

There’s a scene near the end of the first episode where the monarch has a casual conquest in her bed. ‘She used that particular one, and threw him out when she was done,’ she says. ‘Once she felt a relationship was coming to an end, she would give them a palace and send them off. They would be made for the rest of their life.’

Mirren said she was always sad when her own affairs ended. ‘It’s painful, but you get over it and you go on.’ 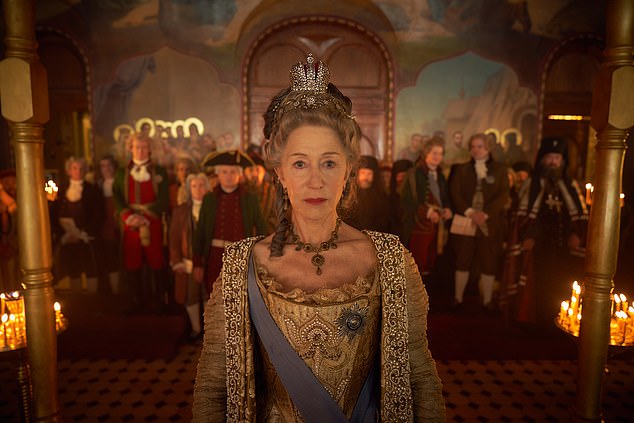 Catherine the Great was christened Princess Sophie. However her mother Johanna ensured Sophie came to the attention of Empress Elizabeth of Russia

The actress and I were in the grand showroom of antique jeweller, Sandra Cronan, in Mayfair. (They lent her the stunning diamond pendant.) Earlier, a small group of us enjoyed a Russian ‘high tea’: blinis and caviar, vodka marinated salmon pinwheels, chicken and Russian cured ham ballotine with black truffle aioli. I skipped the Krug and opted for a Fortnum & Mason’s Russian tea instead.

Then the other guests departed, and Mirren and I were left alone.

Catherine wasn’t born to rule Russia, she said. She wasn’t even born Catherine. The daughter of a minor German prince, she was christened Princess Sophie.

But her mother Johanna ensured Sophie came to the attention of Empress Elizabeth of Russia who, in turn, selected her to be the wife of her sickly nephew — and heir — the future Emperor Peter III.

‘Her mother was dreadful,’ Mirren said. ‘A real social climber. She was a classic stage mother; she wanted the reflected glory. 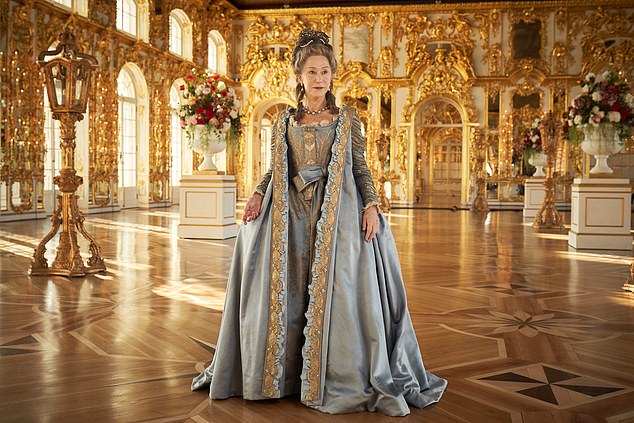 The palace in St Petersburg was shut to the public. I walked through the interior on my own and just stood there. I had this slightly out-of-body experience and felt, for a moment, what it must have been like for her’

‘Sophie knew no Russian,’ she continued. ‘But she embraced everything: the culture, the church, the costumes. Everything. She knew she had the capability to do it.’ That’s something Mirren understands. She was born Ilyena Lydia Mironoff. Her grandfather was a Russian noble and diplomat who found himself stranded in England as the Russian revolution kicked off, and moved to Leigh-on-Sea in Essex. Before his death in 1955, he would regale the young Helen with stories of their Russian heritage. The Mironoffs became the Mirrens.

Returning to Russia, to some of the very palaces where Catherine the Great lived, to film the drama, was an ‘extraordinary’ experience. ‘To be in Catherine’s palace, to be dressed in grand costumes, the jewellery — fake! — was extraordinary. The palace in St Petersburg was shut to the public. I walked through the interior on my own and just stood there. I had this slightly out-of-body experience and felt, for a moment, what it must have been like for her.’

The 74-year-old actress is no stranger to playing powerful women. She won an Emmy and a Golden Globe for her portrayal of Elizabeth I on television; and went on to win the Oscar, Bafta and Golden Globe for The Queen, in which she played Elizabeth Windsor. She took on the same role in Peter Morgan’s play The Audience — and was garlanded with an Olivier in the West End, and a Tony on Broadway. 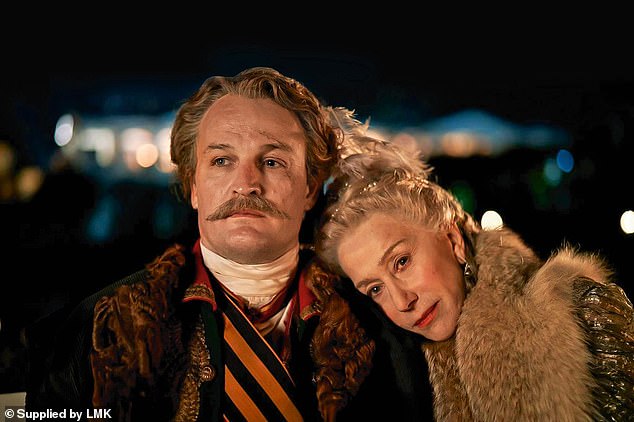 Mirren believes all three sovereigns stepped into their roles with a full understanding of what was involved. ‘It wasn’t about poncing around in big dresses with crowns on their heads and everybody looking at them. I think they all knew that, behind all of that pomp and circumstance, was an incredibly difficult job that needed very specific capabilities. 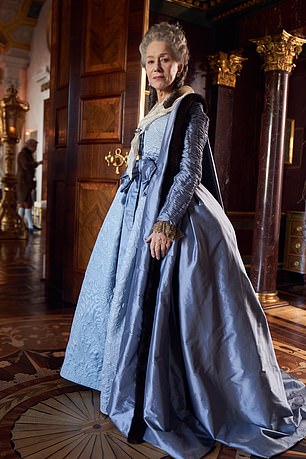 ‘Catherine would cast her eye across a man and say: “Maybe I’ll have him”

‘And I suspect they all had that in common, though they’re different women, of course, coming from different moments in history.’ She said one of the keys to portraying these characters was to: ‘play the person. I never play regal. The regality is made by the people around you.

‘If the Queen walked through that door right now, we would all immediately look at her and do whatever we do to make her the Queen. We do that.’

I asked if she had her eye on any other Royal roles. ‘No,’ she said firmly. ‘Working class women from now on!’

She’s an admirer of the mammoth Netflix hit The Crown, also written by Peter Morgan, which starred Claire Foy in the first two seasons, and now has Olivia Colman taking over the part of Elizabeth II in seasons three and four. The third instalment, of ten episodes, starts in November. 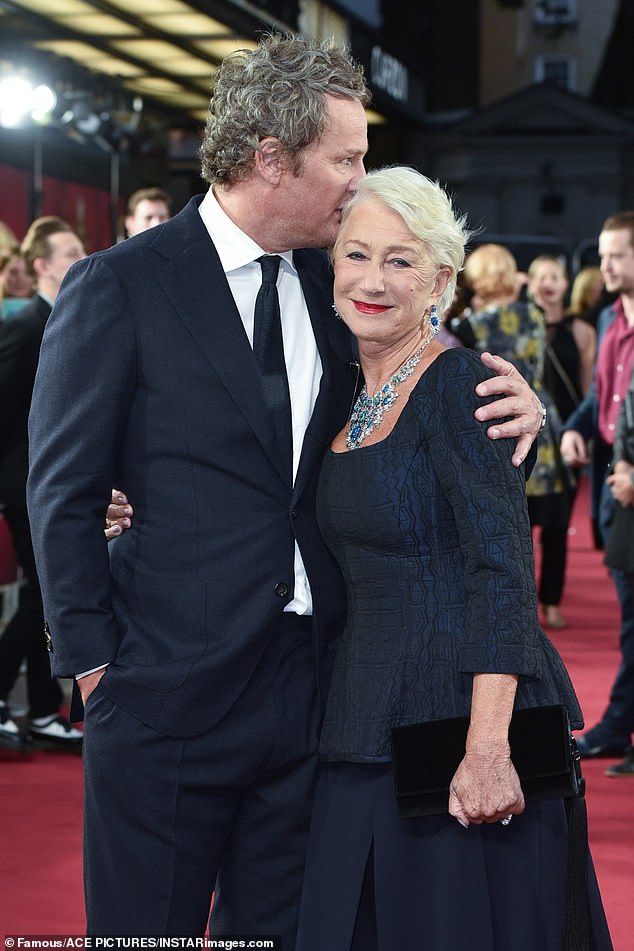 Jason Clarke poses with Helen Mirren for the premiere of Catherine The Great at the Curzon, Mayfair

Netflix will be seeking a new actress to play Elizabeth Windsor (as Mirren likes to refer to her) in seasons five and six.

‘Claire absolutely nailed it; and I know that Olivia will do the same. I’m an actress, and there are other roles.’

I protested that audiences adored her as the Queen. ‘I don’t think they loved me. They loved her. We all love her.’