The helicopter carrying Kobe Bryant, his daughter, Gianna, and seven others that crashed into a rugged hillside outside Los Angeles was flying in foggy conditions considered dangerous enough that local police agencies grounded their choppers.

Bryant’s helicopter left Santa Ana in Orange County, south of Los Angeles, shortly after 9am, a time when conditions were not suitable for flying, according to the Los Angeles Police Department.

There was an overcast at 1,300 feet and visibility of about five miles. The pilot, who was named as Ara Zobayan was flying under visual flight rules (VFR), meaning that he was relying on his ability to see the terrain below him.

Around 9.20am, the helicopter circled for about 15 minutes just east of Interstate 5, near Glendale.

Air traffic controllers (ATC) held up the helicopter for other aircraft for about 11 minutes, before clearing the Sikorsky S-76 to proceed north along Interstate 5 through Burbank’s airspace.

Air traffic controllers noted poor visibility around Burbank, just to the north, and Van Nuys, to the northwest.

Kobe Bryant’s helicopter left Santa Ana in Orange County, south of Los Angeles, shortly after 9am, a time when conditions were not suitable for flying

However, when pilots fly under IFR, it can take up a lot of time, especially in Southern California, which has an extremely busy airspace.

Paul Cline, an assistant professor of aviation at the City University of New York, told New York Magazine that flying under IFR could mean you could be in a holding pattern for ‘an hour’.

‘You’re just one of many waiting in line, and it doesn’t matter if you’re Kobe Bryant,’ Cline added.

The aircraft continued under VFR and around 9.40am it turned west to follow US Route 101, the Ventura Highway.

At about 9.44am, the helicopter turned again, toward the southeast, and climbed to more than 2,000 feet, in what appeared to be an attempt to put some space between the helicopter and the high terrain.

In air traffic control audio which was recorded shortly before the crash, the pilot of the former Lakers star’s helicopter is told by a controller that ‘you’re still too low level’ to be tracked by radar.

This did not appear to be a sign of distress, because the helicopter was actually ascending at the time and the controller was referring to the technical difficulty with reading data rather than warning of an imminent crash.

Helicopter pilot Phillipe Lesourd told The Sun after listening to the audio that other aircraft appeared to be having problems which was ‘not a good sign’.

‘When you ask for a special VFR [visual flight rules], which they did, only one aircraft is allowed in the airspace,’ he said. 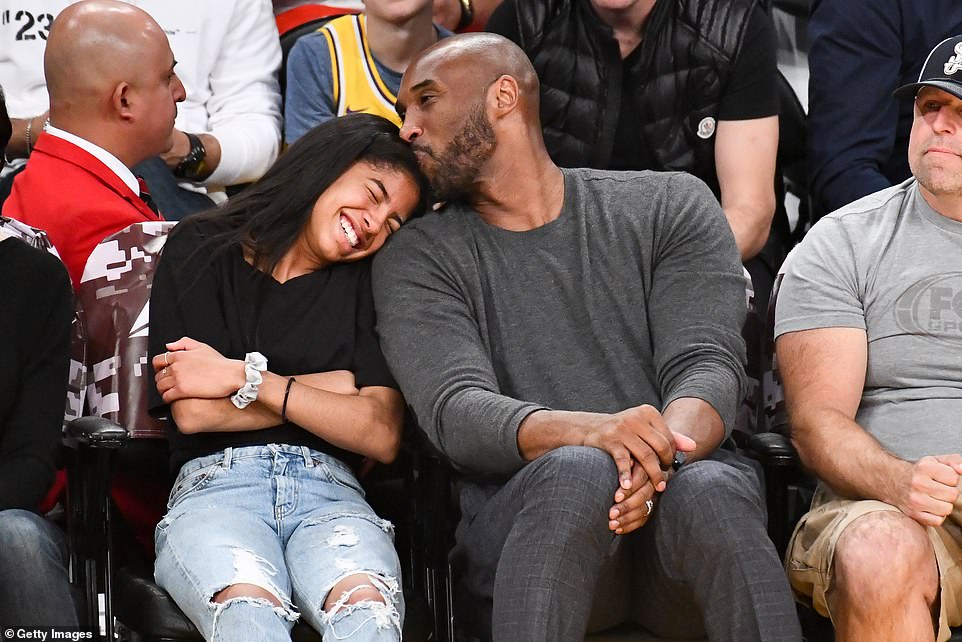 The 41-year-old Bryant, who perished with his 13-year-old daughter, Gianna, was one of the game’s most popular players and the face of the 16-time NBA champion Lakers 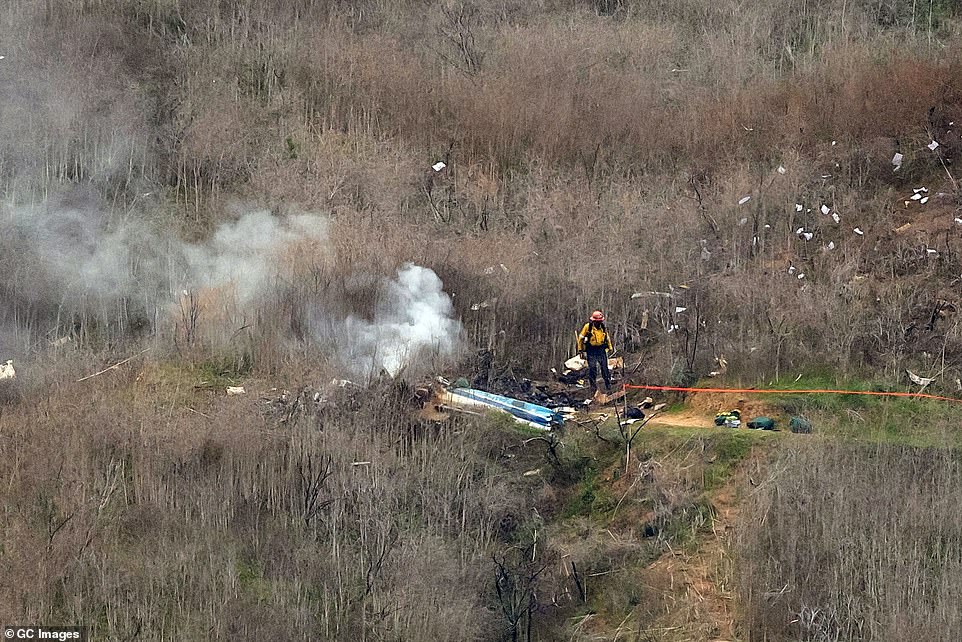 The site of a helicopter crash that claimed the lives of Bryant, his daughter Gianna, 13, the pilot and six other passengers on Sunday 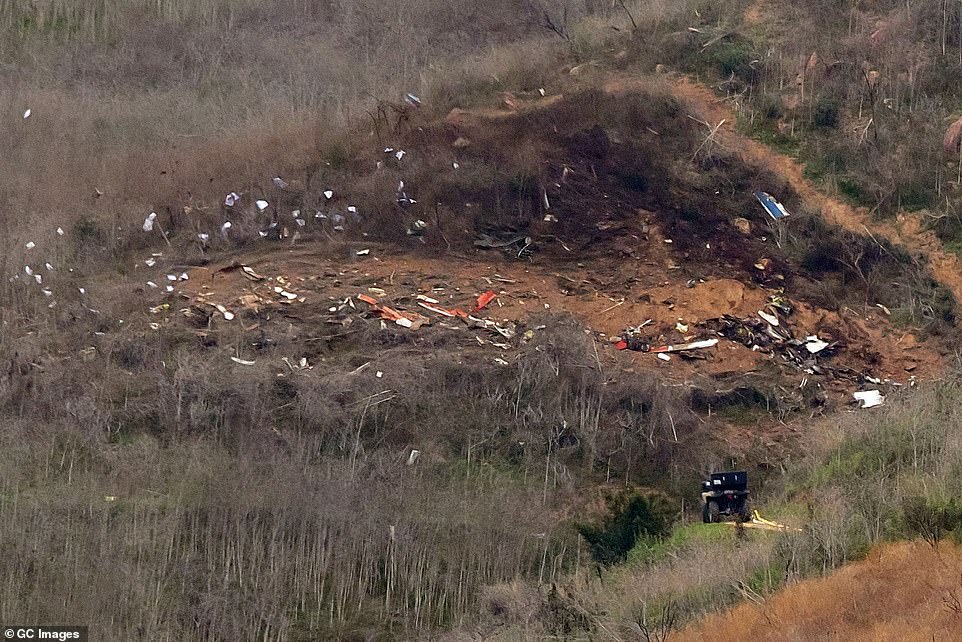 When the helicopter plunged into a steep hillside on Sunday, its impact scattered debris over an area the size of a football field and killed all aboard

‘You can hear the controller saying that it had an “ad go around,” that means an aircraft already cancelled its landing because of low visibility.’

It then descended and crashed into the hillside at about 1,400 feet, according to data from Flightradar24.

When it struck the ground, the helicopter was flying at about 184mph and descending at a rate of more than 4,000 feet per minute, the data showed.

The chopper went down in Calabasas, about 30 miles northwest of downtown Los Angeles.

Bryant’s chopper was only 17 miles from the Mamba Sports Academy when the crash occurred.

It’s unclear where the pilot was going to land in Thousand Oaks, but the nearest helipad to the 100,000-square-foot facility is at Amgen headquarters which is a little over six miles away from Mamba Sports Academy.

Bryant’s sports academy in Thousand Oaks was holding a basketball tournament on Sunday.

When the helicopter plunged into a steep hillside on Sunday, its impact scattered debris over an area the size of a football field and killed all aboard.

Among those killed in the crash were John Altobelli, 56, longtime head coach of Southern California’s Orange Coast College baseball team; his wife, Keri; and daughter, Alyssa, who played on the same basketball team as Bryant’s daughter, said Altobelli’s brother, Tony, who is the sports information director at the school.

In a Facebook post he said: ‘My kids and I are devastated. We lost our beautiful wife and mom today in a helicopter crash.’

He estimated it would take at least a couple of days to complete that task before identifications can be made.

The accident unleashed an outpouring of grief from admirers around the world who mourned the sudden loss of the all-time basketball great who spent his entire 20-year career with the Los Angeles Lakers.

Thousands of fans, many wearing Bryant jerseys and chanting his name, gathered outside the Staples Center in downtown Los Angeles, home of the Lakers and site of Sunday’s Grammy Awards where Bryant was honored.

The 41-year-old Bryant, who perished with his 13-year-old daughter, Gianna, was one of the game’s most popular players and the face of the 16-time NBA champion Lakers.

The cause of the crash is still unknown, but conditions at the time were such that the Los Angeles Police Department and the county sheriff’s department grounded their helicopters. 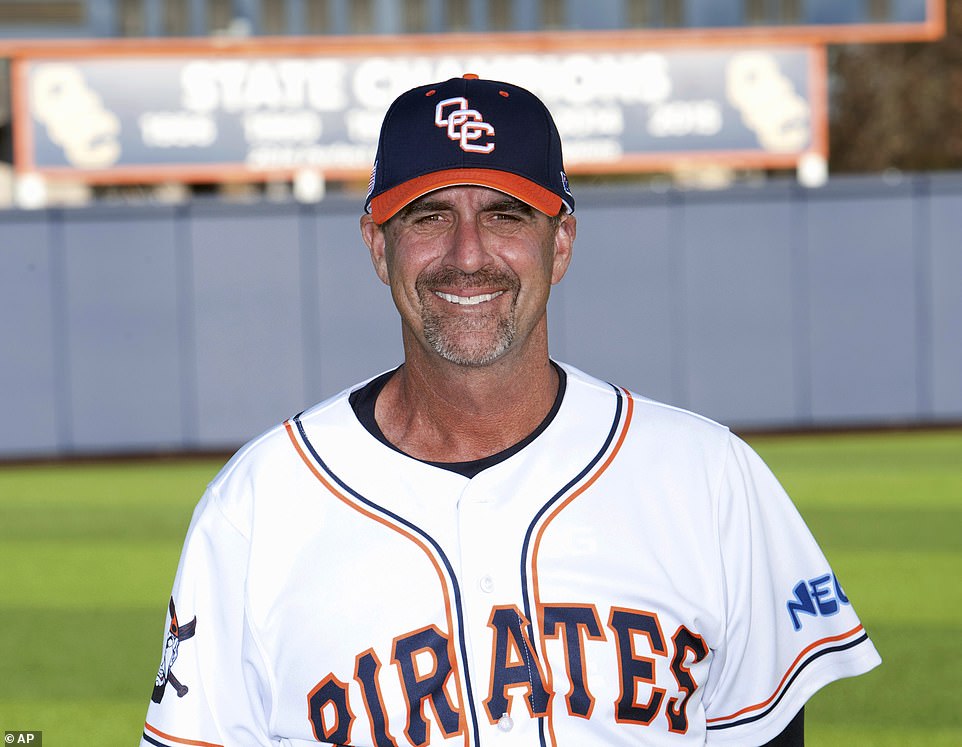 Federal transportation safety investigators will look at the pilot’s history, the chopper’s maintenance records and the records of its owner and operator, said National Transportation Safety Board (NTSB) board member Jennifer Homendy at a news conference.

Kurt Deetz, a pilot who used to fly Bryant in the chopper, said the crash was more likely caused by bad weather than engine or mechanical issues.

‘The likelihood of a catastrophic twin engine failure on that aircraft — it just doesn’t happen,’ he told the Los Angeles Times.

Justin Green, an aviation attorney in New York who flew helicopters in the Marine Corps, said pilots can become disoriented in low visibility, losing track of which direction is up.

Green said a pilot flying an S-76 would be instrument-rated, meaning that person could fly the helicopter without relying on visual cues from outside.

The NTSB typically issues a preliminary report within about 10 days that will give a rough summary of what investigators have learned. A ruling on the cause can take a year or more.

Colin Storm was in his living room in Calabasas when he heard what sounded to him like a low-flying airplane or helicopter.

‘It was very foggy so we couldn’t see anything,’ he said. ‘But then we heard some sputtering and then a boom.’

The fog cleared a bit, and Storm could see smoke rising from the hillside in front of his home.

Firefighters hiked in with medical equipment and hoses, and medical personnel rappelled to the site from a helicopter, but found no survivors, Los Angeles County Fire Chief Daryl Osby said.

News of the charismatic superstar’s death rocketed around the sports and entertainment worlds, with many taking to Twitter to register their shock, disbelief and anguish.

‘Words can’t describe the pain I am feeling. I loved Kobe — he was like a little brother to me,’ retired NBA great Michael Jordan said. ‘We used to talk often, and I will miss those conversations very much. He was a fierce competitor, one of the greats of the game and a creative force.’

Bryant retired in 2016 as the third-leading scorer in NBA history, finishing two decades with the Lakers as a prolific shot-maker with a sublime all-around game and a relentless competitive ethic.

He held that spot in the league scoring ranks until Saturday night, when the Lakers’ LeBron James passed him for third place during a game in Philadelphia, Bryant’s hometown.

He was the league MVP in 2008 and a two-time NBA scoring champion, and he earned 12 selections to the NBA’s All-Defensive teams.

He teamed with Shaquille O’Neal in a combustible partnership to lead the Lakers to consecutive NBA titles in 2000, 2001 and 2002.