A skier with a group of friends at a backcountry jump in Utah accidentally triggered an avalanche when he fell capturing a terrifying slide down the mountain before his complete burial in snow.

The skiers were near Guardsman’s Pass near Park City, Utah, on Saturday where the companions had been doing jumps in the canyon earlier, until the unfortunate member of the group, who wished to remain unidentified, fell, according to FOX 13 Salt Lake City.

‘I’ll remember that moment when the day switched,’ said Colby Stevenson, 21, a professional competitive skier. ‘I watched him roll over the jump. All the sudden I see this avalanche and I’m like, ‘oh, slide!”

The helmet cam captured the moment the perspective abruptly flips over and a chaos of snow is kicked up. Stevenson could only look on as his friend was carried down the slope amid all that snow. 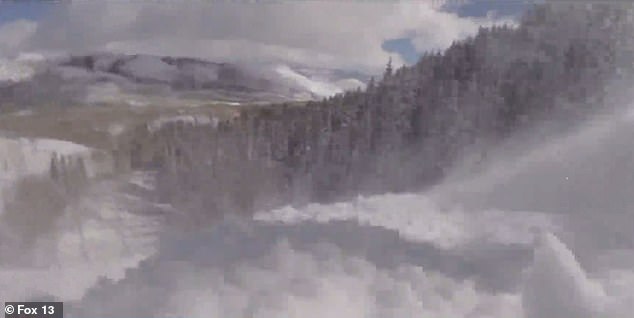 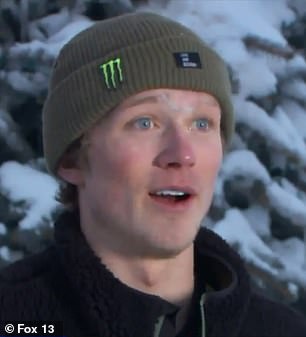 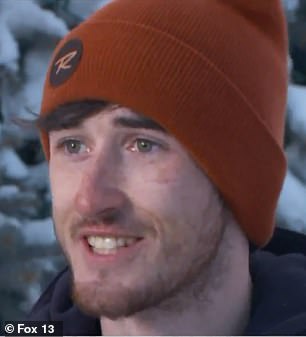 ‘He let go of his poles and he was swimming through the avalanche to keep his head up,’ Stevenson told FOX. ‘Right as the slide comes to a stop, I’m skiing over there, full panic, adrenaline through the roof, just wanting to save my friend.’

The avalanche carried the his friend approximately 200 feet past rocks and trees lining the mountainside until it fully buried him.

‘It was scary. I didn’t know how to think straight really,’ said John Brown, 24, another ski pro who also witnessed his friend carried away by the snow slide.

The skiers spotted the tip of a ski during their immediate search for their friend. 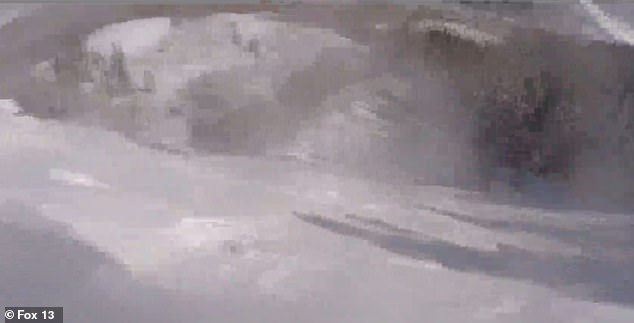 When the snow settles, a suffocating blue wall can be seen directly in front of the camera as the wearer issues muffled screams

Luckily, the two experienced skiers who were with the unfortunate burial victim were able to find him 75 seconds after he was covered, digging him out of the packed, cement-like snow

‘When I hit his leg for the first time he started screaming,’ Stevenson said, the muffled screams chillingly recorded on the cam footage. ‘It was very frantic we were just going to dig until his head was free and he could breathe.’

He was buried cemented snow for 75 seconds before his rescuers were able to free him from the icy burial.

‘We dug his head out and I’m like, “I’m sorry I hit you in the head,”‘ Brown recalled, ‘and he’s like, “that was the best feeling in my life is just getting hit in the head with a shovel.”‘

The rescued skier was lucky to have two competitive pro-skiers with years of experience in Colby Stevenson and John Brown in his group carrying the necessary equipment to save his life.