Henderson International Income backs firms that stand up to headwinds

Dividends to shareholders from companies worldwide continue to recover from the hit they took in the pandemic. The latest data from investment manager Janus Henderson indicates global dividends in the first quarter of this year were 11 per cent higher than in the same quarter of 2021.

Although the robustness of dividends could be challenged in the months ahead as inflation refuses to go away and global economic growth slows, the data confirms that dividends are not just a feature of the UK stock market.

They are paid by many international companies, including those operating out of Asia and some of the world’s emerging economies.

The best performers, in terms of overall investment returns – not just income payments – are JPM Global Equity Income, Liontrust Global Dividend and Guinness Global Equity Income. All three have generated total returns of 60 per cent plus over the past five years.

There are also a smaller number of stock market listed investment trusts that have a global income bent. What makes some of these trusts especially attractive for income hunters is that they have a long track record of delivering annual dividend increases to shareholders.

For example, Scottish American – managed by Baillie Gifford – has 48 years of annual dividend growth under its belt while Murray International and Invesco Select Global Equity Income have 16 and 11 years respectively.

Not far behind is Henderson International Income, a £345million investment trust which is on course to notch up 11 years of dividend increases. In its current financial year which ends on August 31, it has already paid a first quarter dividend of 1.8pence per share.

Shareholders will receive a second payment of 1.8pence on Tuesday. Both represent 20 per cent increases on the year before. To put the payments into context, the trust’s shares are currently trading at around £1.75.

Ben Lofthouse has run the trust since launch in 2011. Although he admits the outlook is a tough one, he is convinced he has built a portfolio comprising companies (67 of them) that have the ability to stand up to economic headwinds. 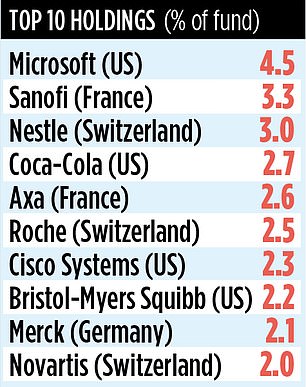 ‘If you look at the portfolio,’ he says, ‘it has healthy positions in health care businesses, consumer staples companies and financials.

Sectors that continue to do well, a result of many companies having sufficient pricing power to ensure their profit margins are not eroded by rising costs.’

He points to strong revenue growth of 16 per cent reported by US drinks company Coca-Cola in the first quarter of this year as evidence of this – the company is one of the trust’s top 10 holdings.

One of the big attractions of such income-orientated investment trusts is their ability to build up reserves that they can then dip into when corporate dividends are in decline.

The Henderson International Income trust did this in the last two full financial years. Lofthouse says the trust still has sufficient income reserves in the tank to cover the equivalent of half last year’s total dividends of 6.3pence.

Over the past five years, the trust has delivered total returns of 33 per cent. Its market code is B3PHCS8 and its ticker is HINT. Annual charges are a tickle over 0.8 per cent.