HENRY DEEDES: A star turn aside, preening gasbags who couldn’t point to Khyber pass on a map

Shortly before 11.30am, Boris Johnson threw back his head and opened those gluey eyes so wide I thought he was about to squirt them with Optrex.

He folded his arms and let out a long, wheezing sigh of despair. Slowly, his face dissolved into a grimace of sober contemplation. No wonder.

We were two hours into the debate on Afghanistan and Tom Tugendhat (Con, Tonbridge and Malling) was delivering the speech of his life. A spine-shivering, lip-wobbling snorter. It took him just shy of nine minutes to deliver.

As each one of those minutes passed, he eloquently encapsulated both the tragedy and farce over America’s decision to leave Afghans to their bloody fate.

The delivery was scholarly. The execution masterful. For the first time since the shutters came down last year, the House was jam-packed. Chocker. Standing room only. Yet from the moment Mr Tugendhat spoke, slow and steady as a funeral march, the place fell so quiet you could practically hear the wood lice snoring.

We were two hours into the debate on Afghanistan and Tom Tugendhat (pictured above) was delivering the speech of his life, writes Henry Deedes

As a veteran of the Afghan conflict, he admitted he had struggled to suppress his rage at recent events. ‘I’ve watched good men go into the earth,’ he said. ‘Taking with them a part of me and a part of all of us.’

His hands shook and his voice quivered at times. But at no point did he lose his composure. He fired an RPG at President Biden for his ‘shameful’ accusation that Afghan troops had simply cut and run as the Taliban advanced.

‘Those who have never fought for the colours they fly should be careful about criticising those who have,’ he said. Oof. The early risers in the West Wing will have felt that barb all the way across the Atlantic.

As Tugendhat gently yanked up his trouser creases and resumed his seat, a smattering of applause echoed around the chamber. Even Labour’s front bench clapped. The Prime Minister, meanwhile, having listened respectfully, took it as his cue to exit.

Tugendhat’s turn aside, it was a preening, gasbag of a day as Parliament was recalled for an eight-hour debate on Afghanistan’s future. Eight hours! Surely orange-suited prisoners in Camp X-Ray never endured such torture.

Boris gave a limp speech, arguing our mission in Afghanistan could not go on without America’s ‘might’. With the green benches rammed, interventions flew at him from every direction. The PM hopped about like someone dealing with a tennis ball machine on the blink.

Sir Keir Starmer had his Captain Hindsight goggles strapped on. Naturally, he’d seen this mess coming. He repeatedly accused the Government of ‘complacency’. Funny. In those weeks leading up to recess, he barely mentioned Afghanistan.

Incidentally, Starmer could do with a few oratory lessons from Tom T. He was so wooden, someone may have had to apply coat of Ronseal to him over the summer break. 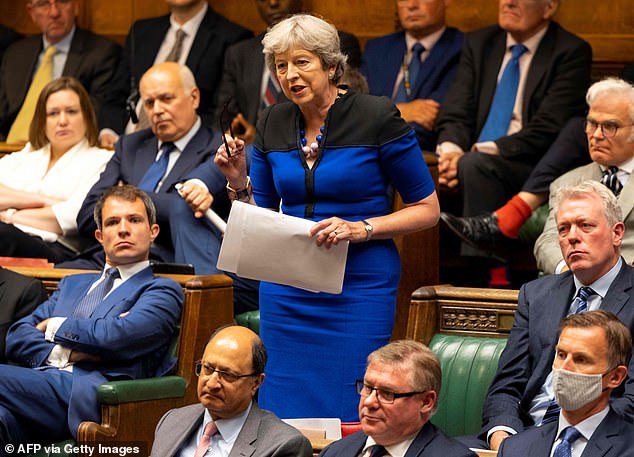 Never one to miss a chance at giving her successor a sharp kick to the nether regions, Theresa May attacked the Government for failing to establish a peacekeeping force with other European countries.

Mrs May, who wore a royal blue face mask to match her outfit, felt a shake-up at Nato was in order. Was she pitching to be its new leader? We’ve put her in charge before and the results, I recall, were far from sparkling.

As usual, Ian Blackford’s arrival prompted a mad dash for the tea rooms. Nearly 15 minutes later, the SNP’s Westminster leader was still on his feet. Eventually came the blessed words ‘In conclusion, Mr Speaker,’ which were greeted with relieved cheers.

There was pungent intervention from ex-soldier Tobias Ellwood (Con, Bournemouth E), who felt sure with the Taliban back in charge another large-scale terrorist attack was imminent to ‘book-end’ next month’s twentieth anniversary of 9/11.

Dan Jarvis (Lab, Barnsley Central) a veteran of two Afghan tours, lamented the plight of those forgotten Afghan interpreters. ‘Where were we in their hour of need?’ he asked. ‘We were nowhere.’ 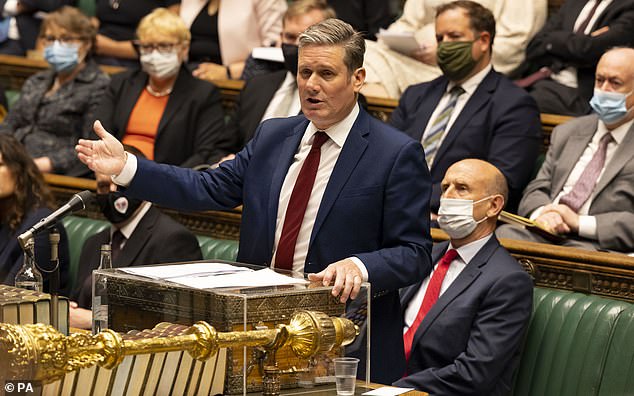 While all this was going on, the Stop The War Coalition wackos were out on Parliament Square in full voice. Interlocking arms with them was Jeremy Corbyn.

Jezza, dressed in a crumpled shirt, had little wisdom to impart on the debate other than that his trade union friends were apparently taking a keen interest in events in Kabul. Concerned about inclement working conditions, perhaps.

On we stumbled through the afternoon, the chamber a cacophony of spray-on angst and phoney outrage as MPs aired their trite views, many doubtless cobbled together from various newspaper op-ed pages on their journeys to Westminster.

Funny how so many who could previously barely point to the Khyber Pass on a map were now suddenly foreign policy experts.

Closing speeches provided little flair. Labour’s foreign affairs spokesman Lisa Nandy could have been an aid worker on her gap year. Dominic Raab droned on so long the Speaker cut him off.

Perhaps we should invite the Taliban here for talks. Tugendhat aside, our politicians could simply bore them into submission.