Peer pressure as Parliament comes apart at the seams: HENRY DEEDES sees jeers and boos in the Lords as they battle it out over a bill stopping No Deal

Quirky thing the British constitution. It is a creaking system of laws and provisions, cobbled together over hundreds of years of precedent.

Doubtless many of its statutes, to the naked eye, appear rather archaic. But tinker with it at your peril. Start chipping away and over time the damage becomes very hard to stop. Pretty soon, people begin to wonder why we bother with procedure at all. Herein lies the route to anarchy.

This was the argument put forward by peers in the House of Lords yesterday in a bid to thwart a bill passing through the upper chamber stopping us leaving the EU without a deal.

The bill, brought by Yvette Cooper (Lab, Pontefract), squeaked through the House of Commons late on Wednesday night by a single vote. Members were required to cast their vote after a short debate with speeches limited to just two minutes. Constitutional practice was told to go hang. The verdict of a number of wise old owls on the red benches: Rummy.

The upper chamber was packed deep by 11.30am to assess the bill. Standing room only for latecomers. Clearly Yvette’s legislature had got peers riled. Either that or the Lords dining room serves up a particularly toothsome treacle tart on Thursdays.

All around, faces from yesteryear. Lords Blunkett, Lansley, Hain. This is where ex-ministers get put out to pasture.

Up first was Labour’s Baroness Hayter, tip-to-toe in luminescent pink, who defended the rushed nature of passing it into law. She argued that ‘unconventional times’ demanded ‘unconventional measures.’

So goes the reasoning of despots. She also complained ‘unelected peers’ were attempting to block the legislation. This from someone who’s barely been so much as elected to a knitting circle.

Roly-poly Tory grandee Lord Strathclyde’s attempts to intervene were met with a volley of boos. The Baroness refused, huffing it was her decision on whether to give way and she had decided not to. Scowling Lord Foulkes of Labour growled at Strathclyde incoherently. Rab C Nesbitt sans humour. 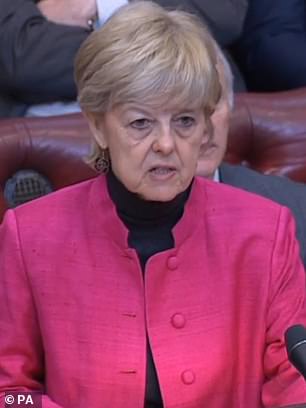 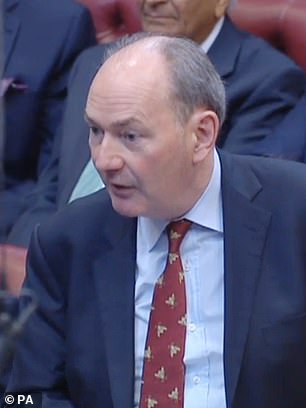 Lord Forsyth (Tory) said the bill would make the Prime Minister’s task of negotiating with the EU more difficult.

He also pointed out it had only passed by one vote – and that came from someone ‘wearing a tag on release from prison’ a reference to jailbird Fiona Onasanya (Lab, Peterborough). Wails of ‘For goodness sake!’ from Labour peers.

Lord Owen then rose. The former Europhile, coiffed and perfumed as though he’d just vacated the barber’s chair at Trumper’s of St James’s, proceeded to make an uninterrupted speech which trickled with honeyed eloquence. 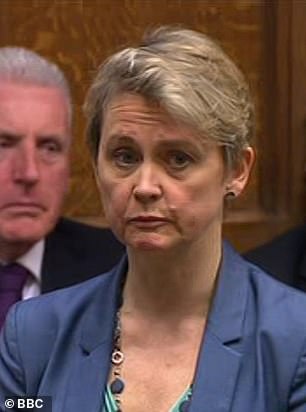 The Lords were debating a bill from Labour’s Yvette Cooper

This type of legislation, he opined, should never be presented either to the House or to the country again. ‘Do not think that we are in a little bubble here which has no implications for anything else,’ he warned.

Moreover, he added, the country voted on a referendum in favour of leaving the European Union and now both Houses were blocking their decision. ‘Shame on you if you do anything to let that happen,’ he hollered. It was belting stuff.

Lord Lawson announced he had served Parliament for 45 years and had never seen constitutional violence on such a scale. Lord Howard said MPs had set a precedent that would have a ‘much more dire effect on our liberties than the issues which we are debating and discussing today.’

The House of Lords is in dire need of a decent clear-out, but these codgers earned their attendance fee yesterday. At the very least, an extra serving of treacle tart.

Speeches threatened to drag on long into the night. Labour accused Tory peers of ‘filibustering’ – the act of wrecking the bill by drawing out the debate and delaying it passing into law – so that it would not tie Mrs May’s hands ahead of her meeting with the EU to request an extension on Article 50 next Wednesday.

Baroness Hayter pointed out the Lords canteen opened at 7am and she was happy to start breakfast orders. I should say her colleagues looked rather less enthusiastic about pulling an all-nighter than she did.

Back in the Commons there was minor drama to while away the tedium. The Press gallery roof sprang a heavy leak during the afternoon which led Deputy Speaker Lindsay Hoyle to suspend proceedings for the rest of the day. Be in no doubt – Parliament is literally coming apart at the seams.