He and his amour, Carrie, decided to stay in. Were they watching Countryfile instead?

One of the main charges against Boris in recent weeks has been that he lacks judgment. In this case, it looked like a wise choice. The ensuing action was not exactly edifying.

A quick summary would say that Jeremy Hunt was good. Govey not bad. Rory Stewart, Sajid Javid and whatshisname Raab, meanwhile, bobbed up and down like skiffs in the wake of an oil tanker.

A quick summary would say that Jeremy Hunt (second left) was good. Govey (left) not bad. Rory Stewart (right), Sajid Javid (middle) and whatshisname Raab (second right), meanwhile, bobbed up and down like skiffs in the wake of an oil tanker

If the Saj offered much by way of contribution it must have passed me by.

No doubts who the audience warmed too, though. Rory’s interventions were met with rapturous applause.

Though considering Channel 4’s metropolitan audience, this is very much his milieu.

The action took place in the broadcaster’s Westminster studios, which had been reconfigured into a futuristic setting reminiscent of 80s sci-fi movie Tron.

Our host: Krishnan Guru-Murthy, a Porsche-driving thruster who’s been waiting for his boss, dear old Jon Snow, to shuffle off for as long as I can remember.

The candidates hardly appeared happy to be there. Suited and booted, they really did resemble schoolboys having to attend an impromptu Sunday service of evensong.

Hunt was scathing about Boris’s no-show. ‘Where is he?’ he jibed. ‘If his team won’t allow him out with five fairly friendly colleagues, how is he going to deal with 27 European countries?’ 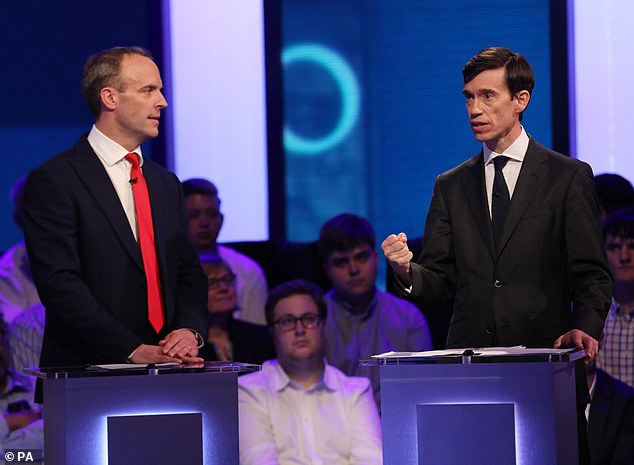 There was a lot of early chat about the threat of socialist Labour. Jeremy Hunt said Jeremy Corbyn was against British values.

Sage head nods all round. Rory Stewart agreed. He’d toured the country, he said, and discovered people did not want to vote Labour.

Gove decided he was the man to see off the red threat. ‘When Jeremy Corbyn wakes up before [prime minister’s] Question Time, who is the person he will be most terrified of facing? That’s me,’ he harrumphed.

Raab came under some early flak over his plans to shut down Parliament to force through a No Deal Brexit.

‘The wrong thing to do,’ said Hunt. Saj was incredulous. ‘You don’t deliver democracy by trashing democracy. We are not selecting a dictator,’ he gasped. 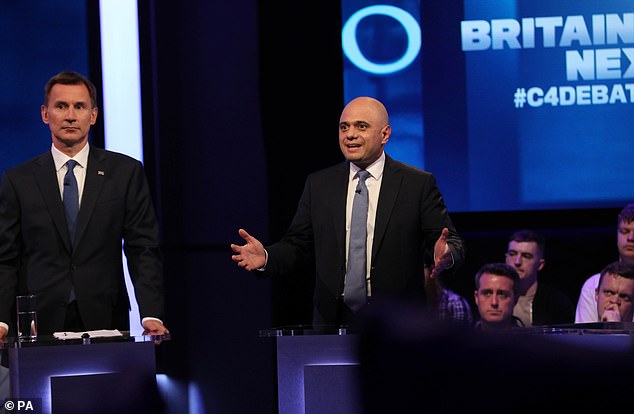 If the Saj offered much by way of contribution it must have passed me by, writes Henry Deedes 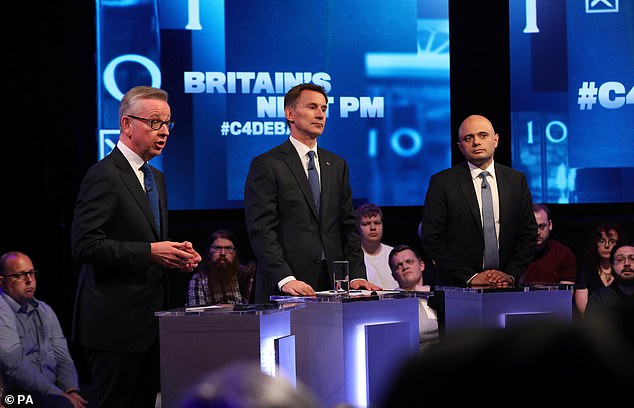 Gove (left) decided he was the man to see off the red threat. ‘When Jeremy Corbyn wakes up before [prime minister’s] Question Time, who is the person he will be most terrified of facing? That’s me

Rory Stewart, sporting a new, Thunderbirds-style haircut, described the plot as ‘deeply disturbing’. Raab flashed him a ‘you, me outside in ten minutes’ sort of glare.

The pair got into an unseemly row over no Brexit later on when Raab accused Stewart of talking down the economy. Neither, I fear, would be likely to serve in the other’s Cabinet should they make it to No 10.

Rory played the angry card all evening. From the start of his campaign, he’s revelled in being the outsider. Shades of Nick Clegg in the 2010 election. ‘I agree with Rory…’

I wonder, if nothing becomes of his leadership bid, if he might not quit politics for something else.

There was a bit of emotional flim-flam in between all the rhubarb. Raab rattled on about mentoring someone at a boxing club in the East End of London, which he’d also announced at his leadership launch. 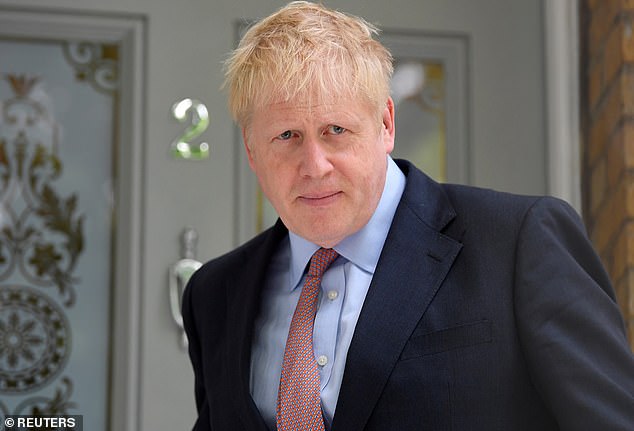 One of the main charges against Boris in recent weeks has been that he lacks judgment. But ducking the debate looked like a wise choice

Stewart, in a rare moment of consolidation, agreed that any of his colleagues present would be a better prospect as Prime Minister than Boris Johnson.

Summing up then, Gove was the most affirmative, announcing: ‘I am ready to unite, ready to deliver, ready to lead.’

Jeremy reminded viewers he was the best person to see off the Corbyn peril.

Raab reaffirmed his hard Brexit credentials, Stewart harped on about his travels around the country and Saj repeated something about not going to a private school.

My prediction: Next week a Boris v Hunt run-off will emerge. Team Boris, I am reliably informed, are not exactly quaking in their brogues.