Standing like a flamingo on one leg, I feel a throbbing pain in my swollen ankle.

But even more excruciating is the hot stab of shame as I realise what my doctor has just said to me.

That morning, I’d left my high-octane CrossFit gym class in South London with a bounce in my step.

Seeing a friend outside, I waved — and promptly tripped over the kerb, going over on my ankle and ending up sprawled at his feet.

An hour later, I am in the doctor’s surgery with a suspected sprain.

As I have more than 50 years of clumsiness under my belt, thanks to a lack of physical co-ordination caused by my mild dyspraxia and hypermobility — where joints bend too far — this is just the latest in a string of painful twists.

But today’s diagnosis will include something new. ‘Hmmm,’ says the GP. ‘Why don’t you just hop on the scales and we’ll have a look?’

‘Oh dear,’ he then says. We peer down at the needle hovering well past the 13st mark.

‘Now I see. You’re obese. To avoid this sort of injury in future, you need to lose weight and get more active. Otherwise you’ll be a burden on the NHS. In the meantime, I can offer you some appetite suppressants and suggest a possible regime for you.’

I gape at him. Has he not listened to my injury history? Why did he weigh me at all? Doesn’t he see that I’m in gym kit and have actually been exercising?

Did he really just offer me drugs? Yes, because he is utterly blinkered by my obesity. Let me be clear: I am under no illusions about my weight.

‘Doctors must stop trying to shame us into losing weight — not for trendy inclusive reasons but because focusing on weight simply doesn’t work,’ says Susannah Jowitt

Aged 53, at 5ft7in tall and with a dress size that slides between 14 and 18, it’s evident that I am perfectly normally, averagely, girl-next-door-ishly fat.

Like so many of us, I wobble, I curve. But while my figure certainly has overhangs — I am a mother of two, after all, now aged 20 and 18 — there are no avalanches.

I can run for the bus and keep up with my fellow gym-goers. Most of the time, I am confident in my own skin and proud of my body. I say ‘most of the time’.

Because sometimes, my confidence falters — such as when a sprained ankle is blamed on me being fat.

Or when my mother compliments me on losing more than half a stone when I’ve had Covid for two weeks, haven’t eaten and feel like death.

Or when, as happened last week, I read that being overweight increases the risk of developing womb cancer, so it’s even more important to ‘maintain a healthy weight by eating a balanced diet and staying active’.

As Edina says to a lecturing Saffy in Absolutely Fabulous, ‘But sweetie, if it were that easy, everyone would be doing it.’ There’s more.

Experts insist that by fractionally tipping over the famously sharp edge of the Body Mass Index (BMI) categories from overweight into obese, I have instantly increased my risk of womb cancer by 88 per cent.

When my initial shame had died down, however, I was overwhelmed by a different emotion: rage. Pure fury at my doctor and the biased medics behind these reports who refuse to accept two simple, demonstrable facts.

One: fat-shaming like this never makes anyone lose weight. And two: being a bit hefty doesn’t automatically mean you are unhealthy.

Indeed, if you go into the detail of the reports on which last week’s stories were based, the highest rates of cancer mortality are actually at both extreme ends of BMI.

This means those who are very fat, with a BMI of over 35 (what is called Obese 2) and very thin, with a BMI of under 18, are statistically both as likely to get cancer.

Those deemed overweight, with a BMI of 25-30, which includes my BMI, are actually protected against a range of cancers and death from cancer more than those in the ‘healthy weight’ category of BMI 18-25.

But, of course, medics won’t put any of this in flashing lights. 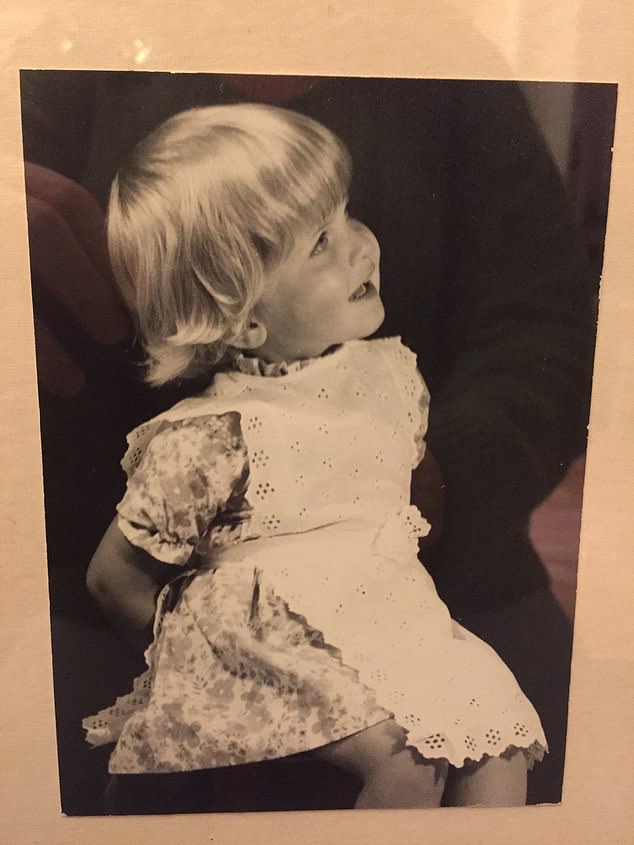 Happy and carefree as a child: Susannah aged three in 1971

And an ‘underweight’ person is hardly going to be castigated by their GP for ‘burdening’ the NHS. You can also have curves and love exercise, as is more than evident from the burgeoning popularity of plus-size athleisure wear.

When an exercise jacket racks up 2.8billion views for its ability to create an hourglass silhouette — as happened with Lululemon’s ‘Brazilian Butt Lift’ Define top last week — it’s clear that girls with curves are on the move.

I exercise four times a week and walk an average 8,000 steps a day. My blood pressure is low, as is my cholesterol.

My heart and kidneys work well, my hormone and blood tests come back with a gold star. Yet the fat-shaming continues even though, as I know only too well, ‘exercise and healthy eating’ cannot shift the pounds that are realistically mine for life.

When I wrote a book on the subject in 2006 — entitled Fat, So? — I found out that it’s my past dieting history which is most at fault for my fatness. Because, believe me, I have really tried to be thin.

A sturdy, rotund little child, I was constantly being told off for being fat and was put on a diet when I was only 11 by my weight-obsessed mother, my first fat-shamer.

I had inherited her family’s propensity for weight gain. And, as my mother spent her life trying to lose weight for good, so, in her opinion, should I.

The sweet tin on top of the fridge was for my thin brother, not for me. When I was 14, she put a black-and-white photo of a young woman in front of me. ‘That’s Fat Aunt Margaret aged 19,’ she said grimly.

‘You’re already bigger than she is there — and look how vast she turned out.’ What followed was a decade of me yo-yo-ing between different diets — the Scarsdale Diet (just 1,000 calories a day) and the Beverly Hills (starting with a selection of fruits, in a particular order, for ten days) were particularly cruel and unusual — losing a stone here, a stone there, but feeling permanently miserable. It was a vicious cycle.

For example, I starved myself so I would arrive at university ‘thin’ at the 10 st mark — then felt disgusted with myself when, through normal eating, I regained the stone I’d lost.

I look back at photos of 20-year-old me, rowing for my college, and I’m clearly at my natural, glorious weight: glowing with health, fabulous bosom, athletic build — but I felt fat because I was over 11st. In my 20s, I just got bigger.

After every diet, every ‘beach body ready’ starvation, the weight piled on more quickly and became ever harder to shift, in a cycle that seemed to be inexorable.

On and off, the diet started by my mother lasted until I was in my late 30s. By then a writer, I began researching the science of fat.

I read all the studies, investigated more than 40 diets, probed the science behind calorie counting and even examined the Holocaust, discovering that many starved people became overweight after the war. I was appalled by what I discovered. I had made myself ‘obese’.

Just starting a diet so young had, in layman’s terms, frightened my prepubescent body into famine response mode: each time I dieted after that, my body thought I was back in a famine, so when I reverted to ‘normal’ eating afterwards, it would jealously hoard its fat cells, saving up for a rainy day of more famine ahead — hence the dieting became less and less effective.

And as I got fatter, I got more miserable. My response to misery was to eat, so the whole cycle gathered momentum.

My book concluded that dieting really is bad for you — physically, mentally and without even the reward of it working. People who diet gain weight more than people who never thought they needed to calorie count. At the time there was much sucking of teeth.

‘You can’t say that!’ said one scandalised TV presenter, when I asserted that dieting made you fat.

‘You cannot believe you can be healthy and fat?’

Well, yes I do. And I’m not alone. The largest study ever conducted into weight loss followed 1.8million people in the States over a ten-year period up to 2012. It concluded that it was ‘not accurate to say life expectancy is reduced as a direct result of body weight higher than the BMI norm’.

So at my level of obesity, I’m going to be a lighter load on the health service than someone half my weight — and I’m likely to live longer to gloat about it.

Meanwhile, regimens that focus on weight loss as the end goal — usually calorie-counting diets — have a long-term (two to five years) failure rate of up to 95 per cent.

Abundant studies into public health ‘obesity initiatives’ have concluded that they make people fatter and deeply unhappy. ‘I am ashamed by my profession sometimes,’ says one doctor friend.

‘When I’m at work I never call people obese because I know how triggering that word is.

It makes people feel worse, ups the weight stigma and actually leads to worse health outcomes.’ What this boils down to is that doctors must stop trying to shame us into losing weight — not for trendy ‘inclusive’ reasons but because focusing on weight simply doesn’t work.

Instead, the NHS and others should take note of the growing movement Health At Every Size (HAES).

This concentrates on intuitive eating (eat good food until you’re full, but really listen to your body on this), joyful physical activity and body positivity.

I’ve adopted the Health At Every Size lifestyle and it has inspired me. I’ve thrown away my scales, only do workouts I enjoy and pose happily in front of the mirror. I no longer need the emotional crutch of comfort food.

If my doctor had restrained himself from fat-shaming — perhaps acknowledging my fitness, my cardiovascular efficiency and my low cholesterol, rather than just focusing on the number on the scales — and others did likewise, maybe we wouldn’t have a £160billion global diet industry.

Perhaps we would have more women like me — proud to be fat and certain I’m healthy, too.