You might not yet know their names, but President Joe Biden’s granddaughters are poised to become the White House fashionistas to watch following their showstopping appearance at the inauguration yesterday.

Naomi, 27, Finnegan, 20, Maisy, 19, and Natalie Biden, 16, have been hailed ‘style icons’ by industry insiders and social media users thanks to their glamorous ensembles.

The young women were the picture of elegance in chic coats as they joined President Biden’s children Hunter, 50, and Ashley, 39, and grandson Robert ‘Hunter’ Biden II, 14, to support their ‘pop’ as he was sworn in, before slipping into stylish looks for the evening festivities, where youngest grandson Beau, also joined in the fun.

Despite their privileged upbringing, the Biden granddaughters are no strangers to struggle and loss. Naomi, Finnegan and Maisy have all watched their father Hunter face high profile scandals, including his drug use, while Natalie and young Hunter lost their father Beau in 2015.

The foursome, who are extremely close, played an active part in President Biden’s campaign and, if last night’s appearance is anything to go by, they could spend more time in the spotlight now that he’s in the White House.

Here, Femail reveals what you need to know about the new first granddaughters of fashion, from Sasha Obama’s best friend Maisy, to TikTok star Natalie… 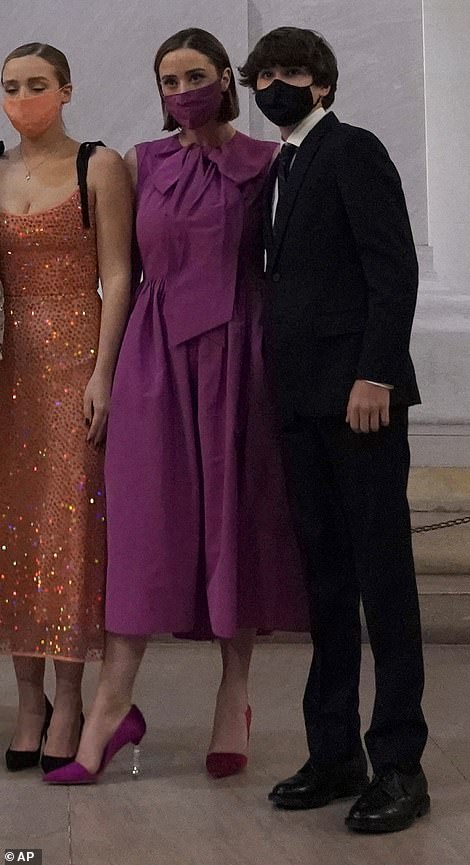 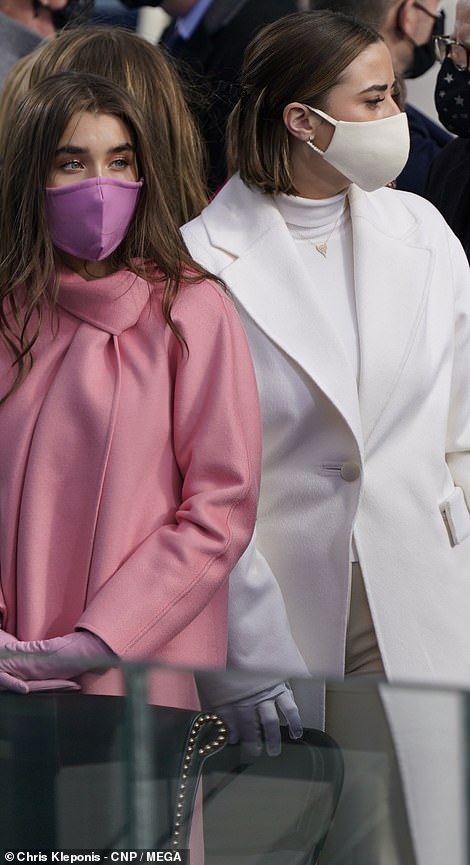 Leading the style stakes: Elegant in a purple ensemble is Naomi Biden, President Biden’s eldest grandchild. During the day she looked chic in an all-white ensemble, a nod to the color worn by the Suffragettes 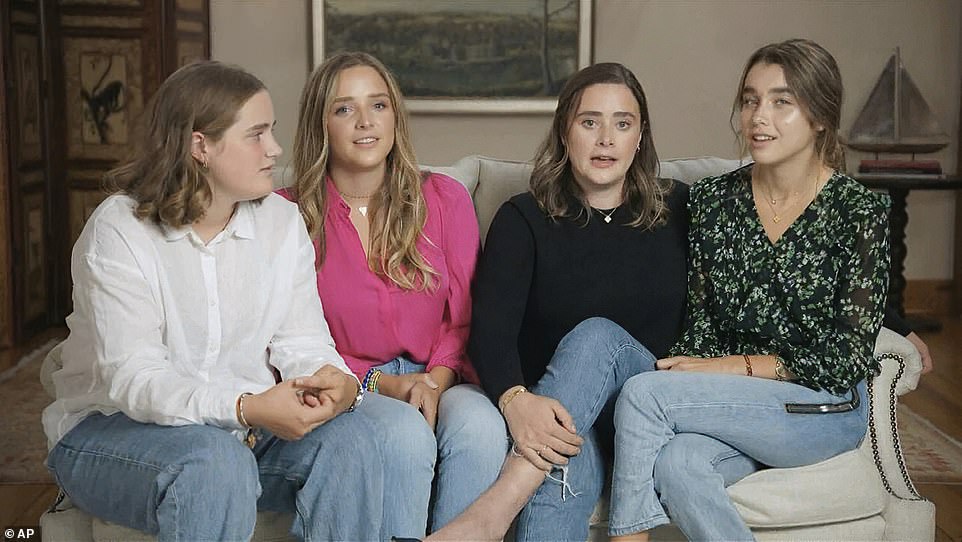 Born in December 1993, Naomi is the daughter of President Biden’s eldest son Hunter and his first wife, Kathleen. Pictured, Naomi with sisters Maisy (left), Natalie (second from left) and cousin Natalie (right) at the virtual DNC in August last year

Born in December 1993, Naomi is the daughter of President Biden’s eldest son Hunter and his first wife, Kathleen.

She is named after Hunter and Beau’s late sister, Naomi Christina, who died as a baby alongside their mother Neilia in a fatal car crash in 1971.

Like all of Hunter’s five children – he has one born out of wedlock who was not included in yesterday’s festivities – Naomi has watched her father’s private life unfold in the public eye. 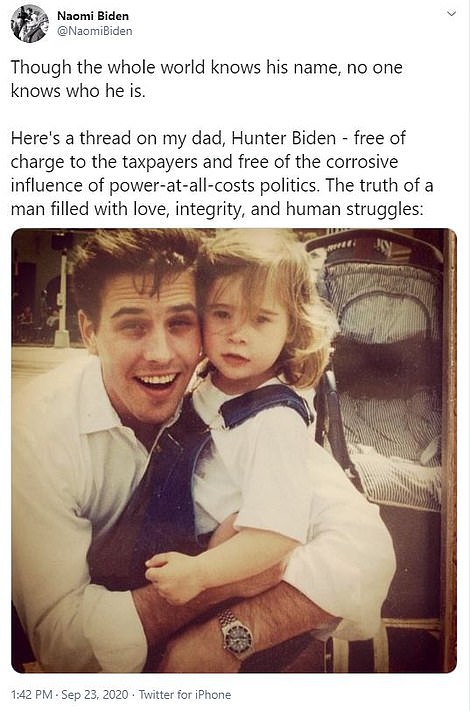 Daddy’s girl: Naomi has publicly defended her father’s past drug use on Twitter, describing him as a man ‘filled with love, integrity, and human struggles (pictured)

Hunter struggled with drug addiction for much her childhood and he first entered rehab when she was still in school. Her parents split back in 2015.

More heartache ensued for Finnegan the same year, when her beloved uncle, Beau, lost his battle with brain cancer. Her dad subsequently began a brief relationship with her aunt.

In recent years, Naomi has watched as her father has continued to hit headlines for his colorful personal life. In 2018, she become a half-sister to a child Hunter fathered with Arkansas based stripper, Lunden Roberts.

An active social media user – she’s the only Biden grandchild with a public Instagram account – Naomi made headlines last year when she blasted President Trump on Twitter after he took aim at her father Hunter and late uncle Beau during a trainwreck presidential debate.

‘I wouldn’t have survived 5 minutes on that stage without slapping him across the face – and I don’t think I’m alone in thinking that,’ Naomi said of Trump.

Trump brought up Hunter Biden’s history with drugs as well as claims the 50-year-old investment advisor took $3.5million from the wealthy wife of the former Mayor of Moscow.

Naomi has publicly defended her father on Twitter, describing him as a man ‘filled with love, integrity, and human struggles.’

She continued: ‘The pain he has endured would be enough to make a lesser man give up on life all together. But despite the best efforts of an cruel few to destroy a private man, he is sober, happy, and as at peace as ever today because as long his family needs him, he has not lost his purpose.’

Naomi studied international relations in college and graduated from Columbia Law School in May. She is in a relationship with Peter Neal, a student at the University of Pennsylvania Carey Law School.

Peter is also an active Instagram user and paid tribute to his girlfriend on her birthday last month with a series of sweet snaps. Naomi and Neal founded a website to help users access stimulus money during the Covid-19 crisis. 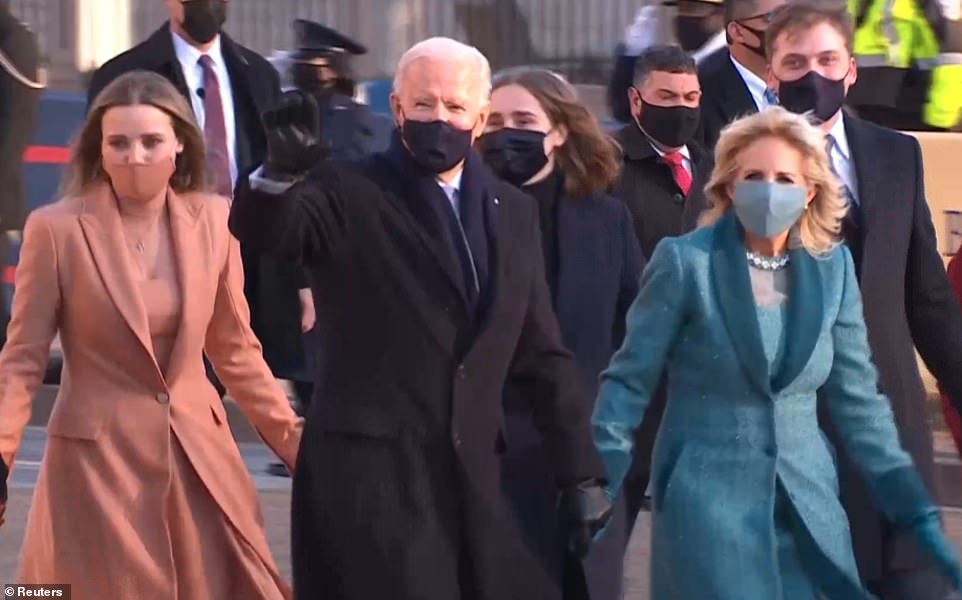 Monochrome magic: Finnegan Biden looked elegant in a neutral ensemble as she joined her grandparents yesterday. She played an active part in her grandfather Joe Biden’s campaign and was by his side as he was sworn in yesterday

Glittering: For the evening event, Finnegan wore a $1,995 coral dress by Markarian. Right, the dress on the brand’s website 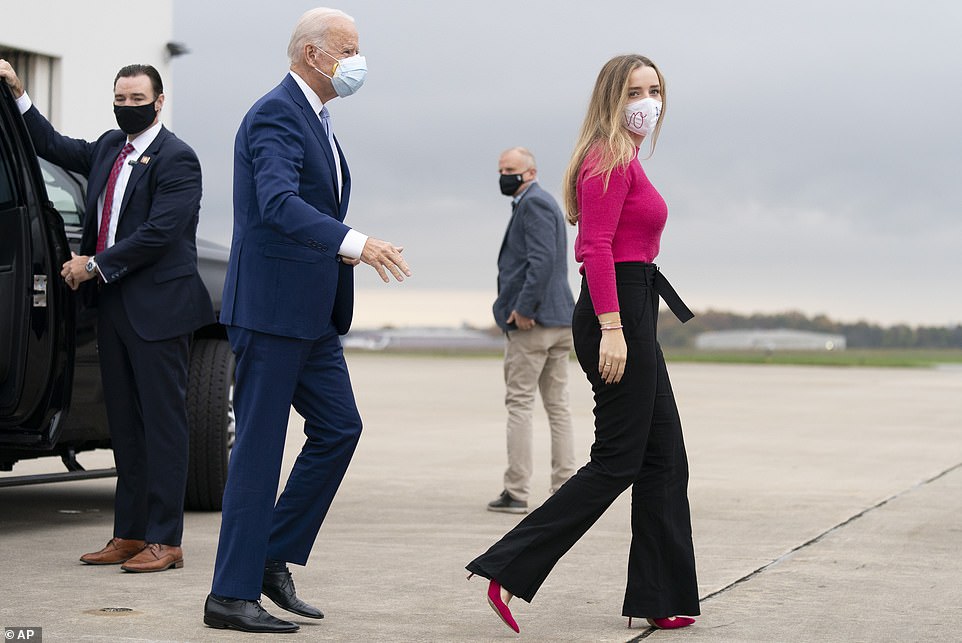 Firm supporter: Finnegan was a fixture on the presidential campaign trail, supporting her grandfather Joe. Pictured, the pair were photographed boarding a plane to travel to Georgia for rallies in October 2020 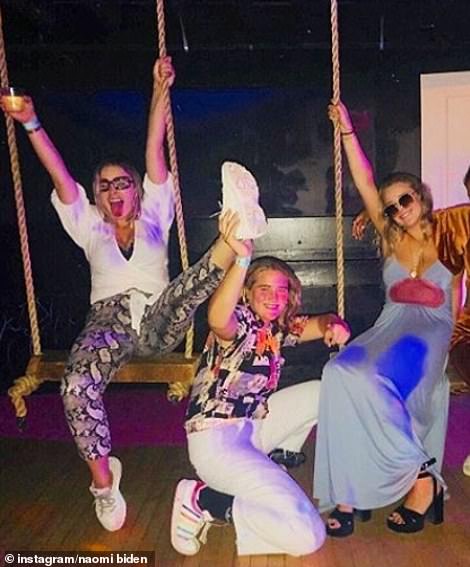 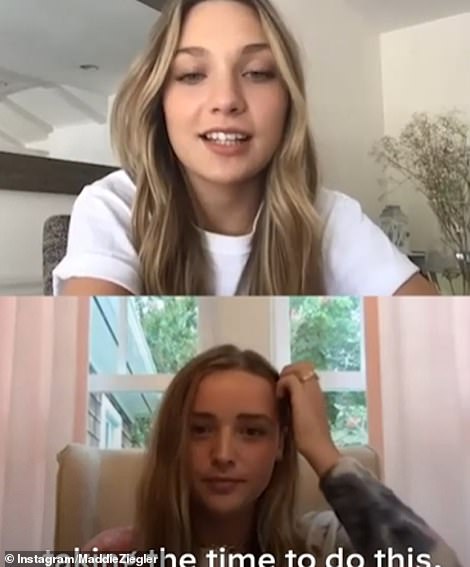 The college student, who has stayed largely out of the limelight over the last few years, has a playful and vibrant sense of style (left) and has been brushing shoulders with celebrities including Dance Moms alum Maddie Ziegler in recent months (right)

Finnegan Biden, who dazzled in a $1,995 coral dress by Markarian last night, is the second of Hunter’s children and was named after her grandmother Catherine Eugenia ‘Jean’ Finnegan, who in 2010 at the age of 92.

Like her older sister, Finnegan has watched her father’s personal struggles play out in public. She was just three years old when he went to rehab for the first time and was starting high school when her parents split.

But the youngster remains incredibly leveled headed despite the drama, and is a senior at the prestigious University of Pennsylvania.

Finnegan was a prominent fixture during Joe Biden’s campaign and joined him at a series of events.

Joe fumbled while introducing Finnegan to a crowd of supporters in Philadelphia, accidentally referring to her as his late son Beau and then mixing her up with his other granddaughter, Natalie.

Finnegan was also caught up in a public discussion when her grandfather kissed her on the lips at an event.

While Finnegan’s own Instagram page is not open to the public, her close-knit relationship with her siblings and the wider Biden family is clear to see from the man fun-filled photos she features in on her relatives’ accounts.

She has appeared on an Instagram Live alongside Maddie Ziegler and The Biden sisters are also believed to be close to Barack and Michelle Obama’s daughters Malia and Sasha, after their grandfather spent eight years working with the President as his Vice President.

The 20-year-old also revealed last year that in high school, she fought to change the dress code, which she viewed as being discriminatory towards female students.

She started a campaign where all the girls in her school came in wearing a T-shirt that said ‘I am not a distraction’. 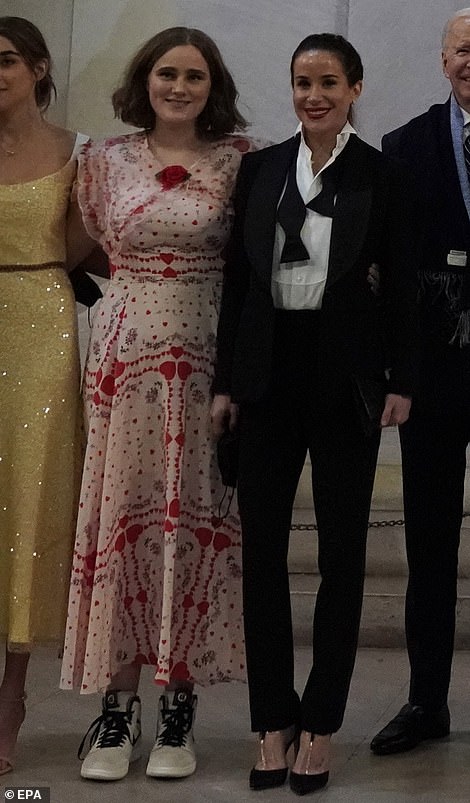 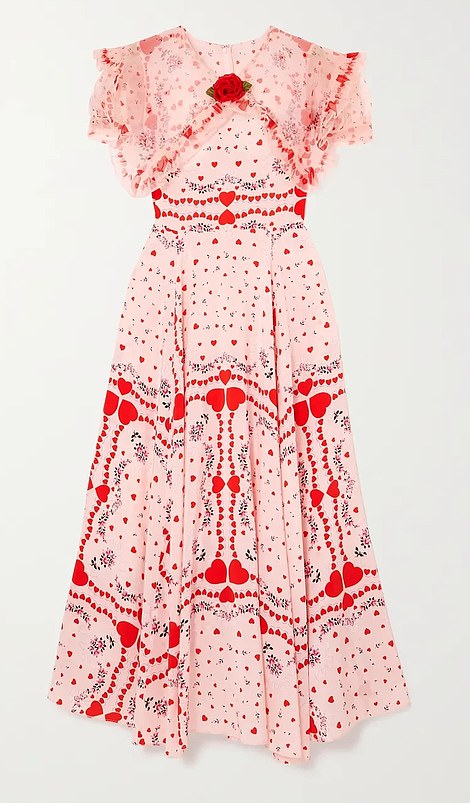 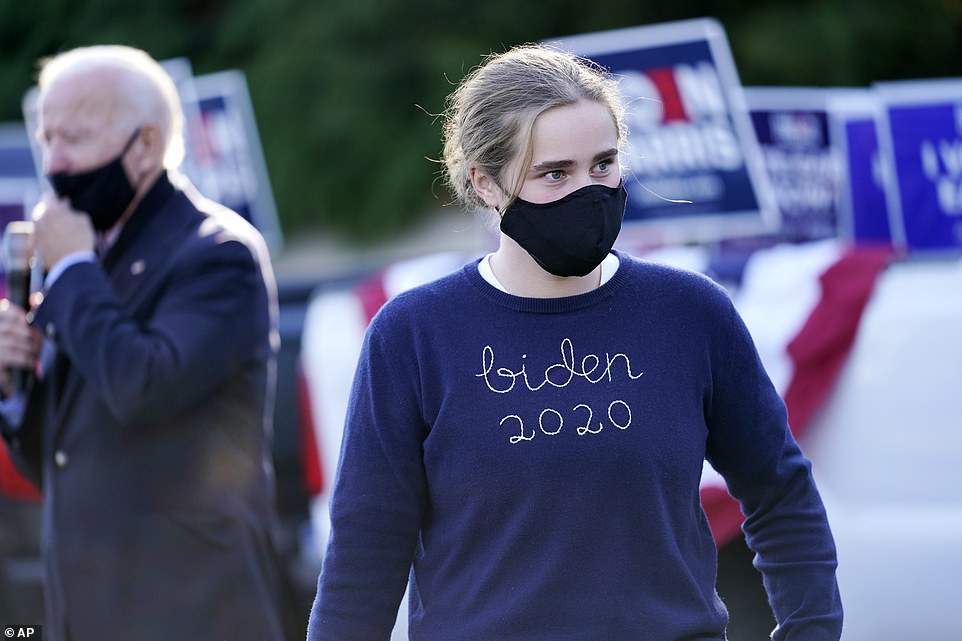 Wearing her thoughts on her sleeve: Maisy Biden joined her grandfather at a rally in Michigan in October last year 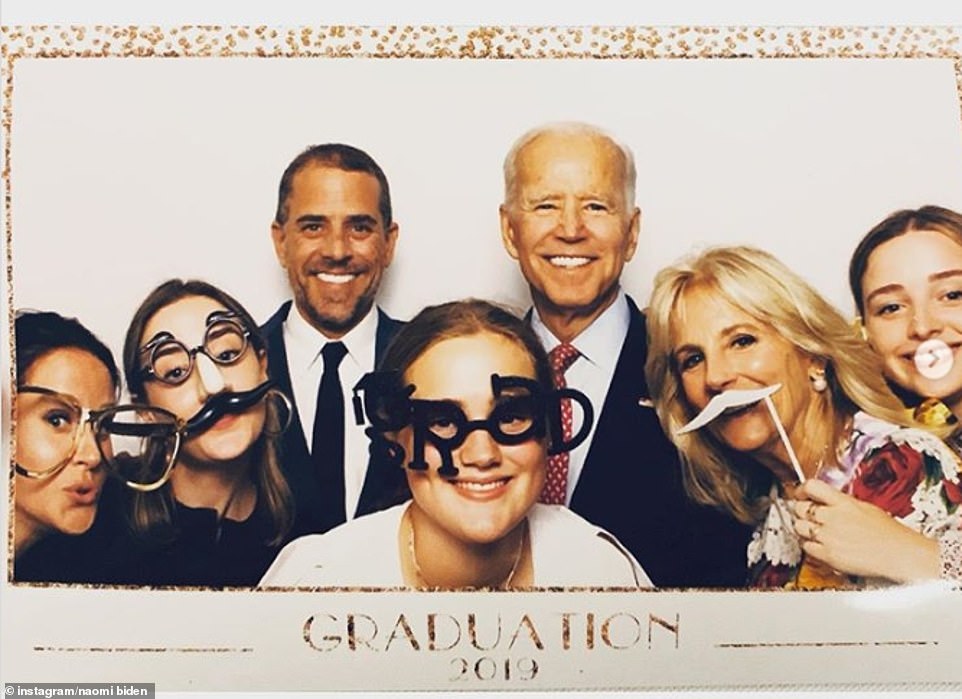 The youngest child of Hunter and Kathleen, Maisy was born in 2001.

She stands out in the family photo thanks to her quirky take on eveningwear: the style-savvy teenager wore her $1,575 Rodarte cocktail dress with a pair of high top trainers.

Like many children of D.C’s political elite, Maisy was educated at the private Sidwell Friends School, where she became firm friends with Barack Obama’s younger daughter Sasha, who is around the same age.

‘Her best friend is Sasha Obama,’ Biden said. The President skipped an event during his primary campaign to watch his granddaughter graduate from high school and proud big sister Naomi later shared a snap of their celebrations on Instagram.

The 19-year-old also has a talent for basketball, which was reflected in her choice of footwear for last night’s event.

‘Maisy’s a real athlete, I mean for real,’ Biden once said of his granddaughter.

Daughter of Beau and Hallie Biden 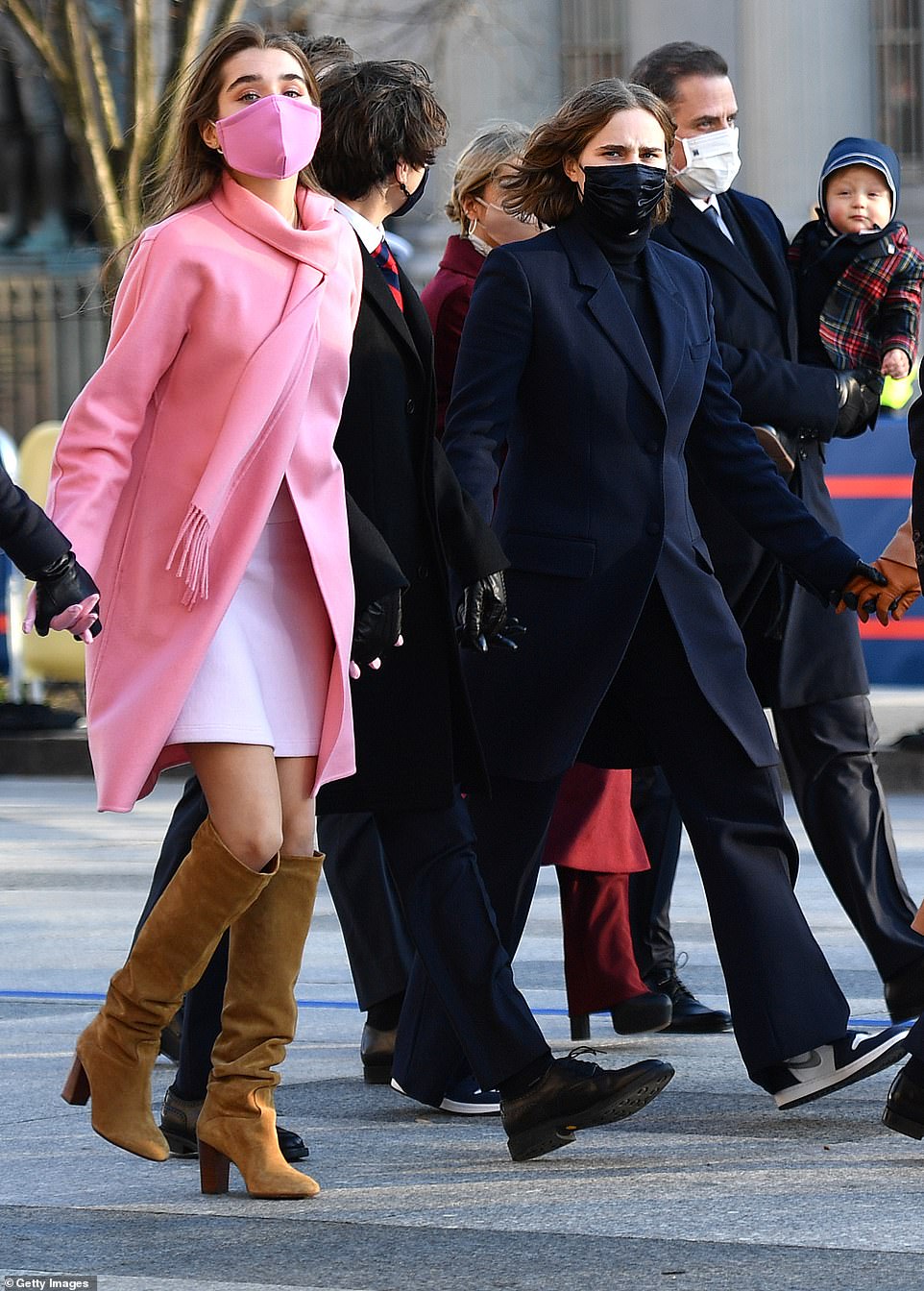 Undoubtedly the Biden who generated the most buzz about her look yesterday was Natalie, the 16-year-old daughter of Joe’s late son Beau Biden and his wife Hallie.

Natalie stole the runway show with a monochromatic pink coat and matching mask before changing into a glittering $1,750 gold sequin Makarian gold corset dress to complement her cousin Finnegan.

Natalie was just a toddler when Biden first became vice president, and she grew up in the spotlight—often photographed with her doting grandfather.

She also offered insight into family life during the 2020 Presidential campaign when she revealed Jill Biden is ‘not your average grandmother’.

The teenage schoolgirl is popular on TikTok and boasts 1.4million followers. Her Instagram is private, although she occasionally appears in snaps posted by her older cousins.

Son of Beau and Hallie Biden 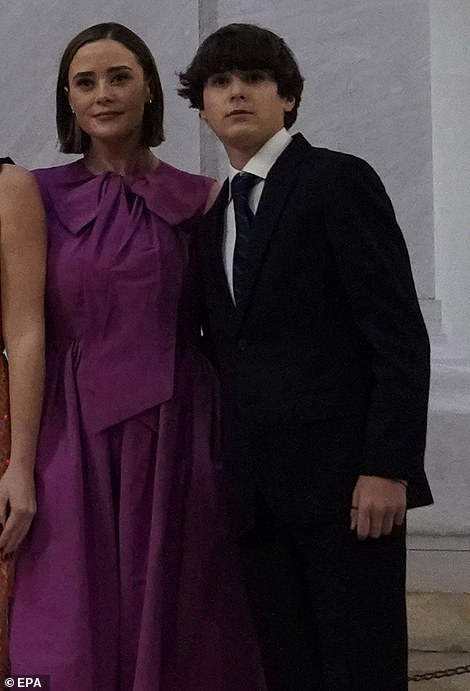 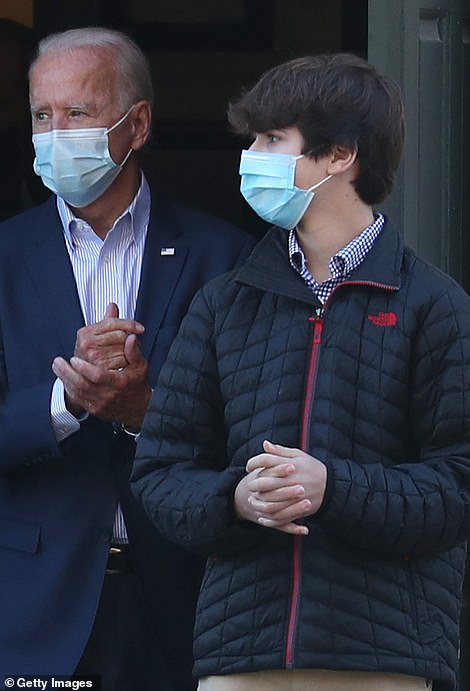 Growing up in the public eye: Less well known than his older sister and cousins due to his age, Hunter is the youngest son of Beau and Hallie Biden. Born in 2006, he was named after his uncle Hunter. Pictured right, at church with Biden last year

Less well known than his older sister and cousins due to his age, Hunter is the youngest son of Beau and Hallie Biden. Born in 2006, he was named after his uncle Hunter.

Like his older sister, Hunter has made several appearances alongside his grandfather. In 2008, he was famously photographed in Joe Biden’s arms as he accepted the Vice Presidential nomination.

Now a young man, Hunter appeared alongside his sisters and cousin’s in a 2020 video in which they recited the Pledge of Allegiance.

He does not have any public social media accounts but occasionally appears in his cousins’ posts.

Young Hunter looked dashing at last night’s events, dressing up in a suit and tie with the rest of the family.