Here’s how to enjoy Seville for under £100 a night

With temperatures in the mid-20s and a lively cafe culture, Seville is brilliant to visit now, although it will be busy (with pricey rooms) over Easter and during Feria de Abril festivities a fortnight later.

Yet Andalusia’s capital thrives on its buzz — and its flamboyance.

Flamenco dancers perform in the streets near the gothic cathedral. Tapas bars by the Alcazar, the Moorish palace, bustle by midday. Clubs and restaurants are packed at midnight.

Seville oranges: A terrace at the Hotel Boutique Elvira Plaza, Seville (above), which is on a lovely square with orange trees and birdsong in the heart of the central Santa Cruz district

On a lovely square with orange trees and birdsong in the heart of the central Santa Cruz district, Elvira Plaza is a design hotel. Rooms are whitewashed, with bright tiles in bathrooms adding some colour — perfect crashpads for a weekend. There’s an expensive see-and-be-seen restaurant, but there are plenty of tapas bars nearby.  Room-only doubles from £90; breakfasts £10 extra per person (hotelelviraplaza.com)

Hidden away in Triana, a neighbourhood that feels less touristy than other parts of Seville (on the opposite side of the Guadalquivir river from the cathedral), Zenit is an oasis of calm. There’s a little courtyard with palm trees, flowers and a cafe/bar — plus 126 rooms in neutral colours. Yes, it’s a bit of a business hotel, but it’s comfortable and cheap. B&B doubles from £90 (sevilla.zenithoteles.com)

This is the former house of renowned flamenco guitarist Nino Ricardo (1904-1972); there’s a plaque outside in his honour and pictures in reception. The dozen rooms have a homely feel, with each in a different colour (it’s worth upgrading to a superior for £17 extra). La Casa is in a little alley, a ten-minute stroll from the cathedral. B&B doubles from £77 (lacasadelmaestro.com)

Booking an Airbnb is a good idea, given Seville’s popularity, especially if travelling with children. Look out for those with five-star ratings such as ‘Two-bedroom apartment in historic Triana building’, which is in a distinguished 16th-century mansion with a courtyard near Santa Ana Church. It sleeps five. Triana apartment from £74 (airbnb.co.uk). Prices can fluctuate. 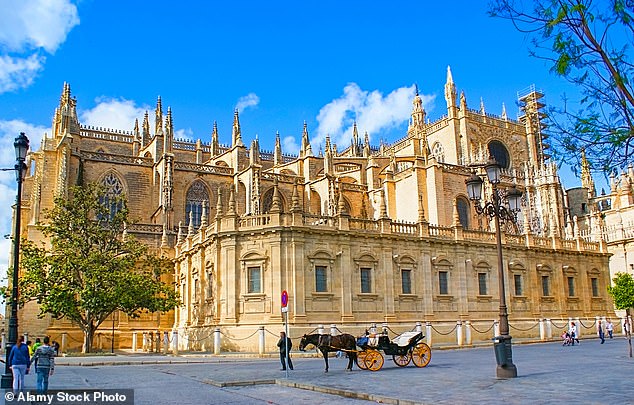 Seville behaviour: The largest Gothic cathedral in the world in Seville (above) is a must-see for tourists for the queues can be be dreadful. Book online and for just 85p extra so you can saunter to the front. Inside are works by Goya, rocket-like columns, the tomb of Christopher Columbus and altars dripping with gold

Entrance o the biggest gothic cathedral in the world — completed in 1506 — is £7.70. However, queues can be dreadful. Book online and for just 85p extra you can saunter to the front. Inside are works by Goya, rocket-like columns, the tomb of Christopher Columbus and altars dripping with gold. catedraldesevilla.escatedraldesevilla.es

Great city views from the bell chamber of the Giralda, formerly a minaret of a mosque (built in the late 12th century by the Moors). Ascent is included in the cathedral’s ticket price, although there is a separate entrance.

The Archivo de Indias is housed in an 18th century building just to the south of the cathedral and is free to enter. Up pink marble stairs you come to a hallway with a fine portrait of Columbus, leading to rooms with exhibits featuring documents from the days of the discovery of the New World.

Built by the Moors, the Alcazar palace is a must with its beautiful tiled courtyards dating from the 8th century, and splendid gardens of palm trees, fountains and passageways. Entrance is £9.85, but queues can be very long. Either go when it opens at 9.30am, or book your ticket online (85p extra) and go straight to the front. alcazarsevilla.org

On the edge of Avenida de la Constitucion by Archivo de Indias, street flamenco performances are often held by solitary dancers on a makeshift wooden floor. It is courteous to offer a tip.

The riverfront near the bull ring next to Paseo de Cristobal Colon has shaded park benches that make lovely picnic spots.

On a corner north of the bull ring, Bodeguita Romero makes a splendid introduction to Seville’s tapas scene. Stand by the stainless steel bar, or nab a table and feast on chorizo, anchovies on toast, pork and black pudding rolls, and garlicky spinach with chickpeas — paired with £1.10 beers or £1.80 glasses of wine. Tapas dishes are £2.30. 10 Calle Harinas 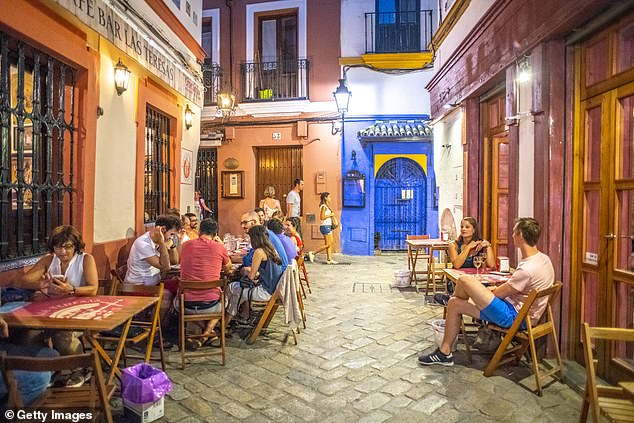 Food for thought: Bar las Teresas, above, is a tapas bar close to Alcazar

Another superb tapas bar, close to the Alcazar. Hams hang from the ceiling, pictures of flamenco dancers adorn the walls and waiters squeeze through the throng, balancing trays of delicious little pork-and-potato stews, olives, sliced hams and drinks. It’s £1.60 for a glass of wine. Tapas dishes are £2.30. For organised tapas tours, try devoursevillefoodtours.com. 2 Calle Santa Teresa

For a taste of local life, this neighbourhood restaurant in Triana — just behind Santa Ana Church — is a winner. Don’t go too early: tables are put out in the square at about 8pm. Tomato salads are £3, fried grouper in pesto sauce is £6.80 and a glass of wine £1.70. 34 Calle Pelay Correa

Go to the right-hand corner of the front of this market for breakfast and tuck into a toasted roll with cured ham, coffee and a glass of fresh orange juice for just £5.10. The service is quick. mercadodetrianasevilla.com

EasyJet has returns from Gatwick from £76 (easyjet.com). A public bus from the airport to the centre of Seville costs £3.40. For more information about the city, visit spain.info