Railway lovers in Lancashire were taken back to an age of ration books, sharp suits and World War Two uniforms on the first day of a nostalgic heritage event today.

Soldiers playing the part of the ’82nd Airborne 505th RCT’ descended on Bury Bolton Street station, on the heritage line between Heywood in Greater Manchester and Rawtenstall in Lancashire.

However, the railway’s uniform policy banned guests from recreating ‘those elements of German and Axis military re-enactment that are likely to inflame emotions and cause offence to our visitors’.

The rule stated that anyone dressed as a member of the SS or Waffen-SS, or wearing a swastika on a red armband or other ‘overt Nazi insignia’, would be denied entry to the railway.

Some children came dressed as evacuees in flat caps, as though heading for the countryside to escape German bombings, while Union Jack bunting lined the station.

It comes weeks after the village of Levisham scrapped its Railway in Wartime event on the North Yorkshire Moors Railway, where it was transformed into a German-occupied village called Le Visham, over fears of ‘possible offence’. 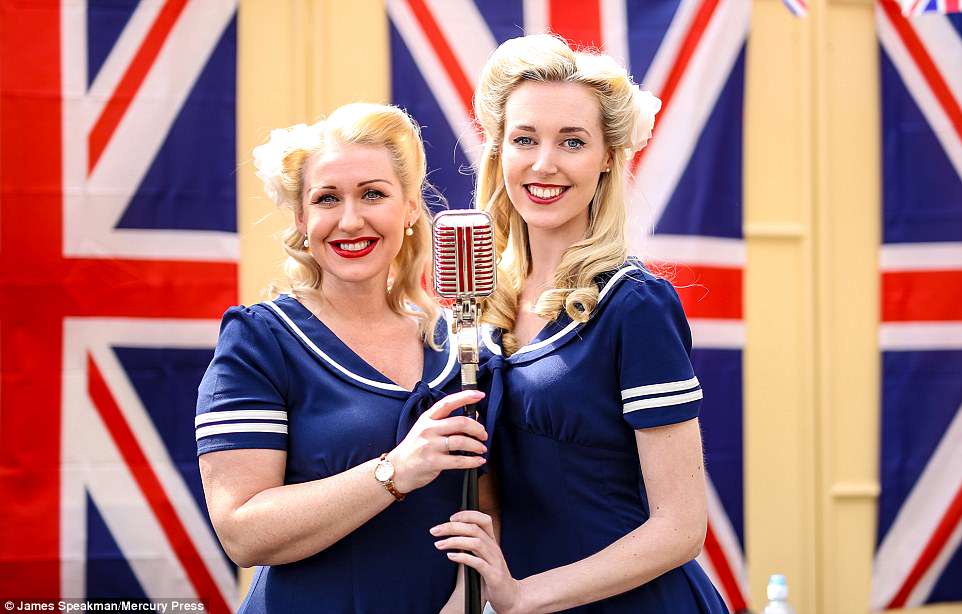 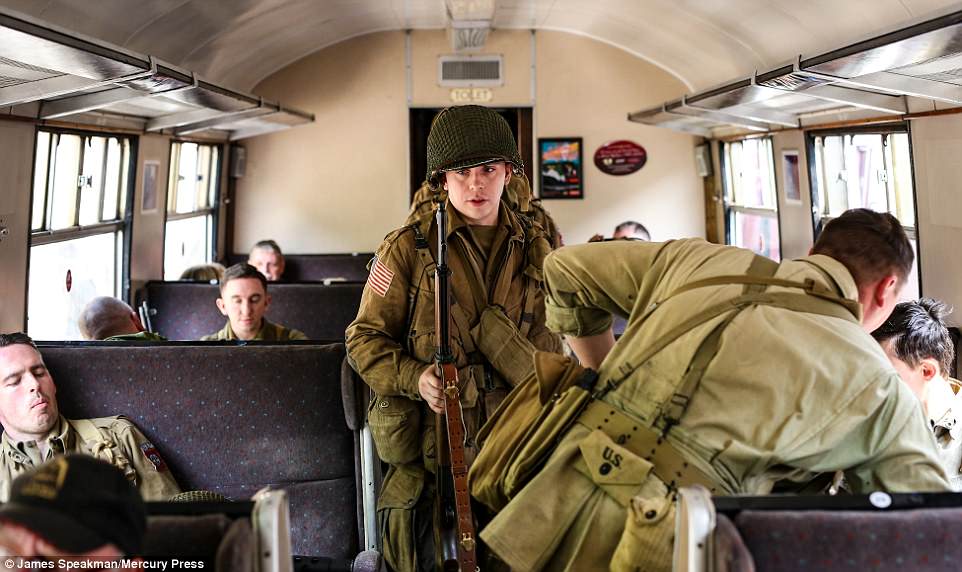 A soldier with a U.S. flag on his arm boards a train at Bury Bolton Street station during the 1940s weekend 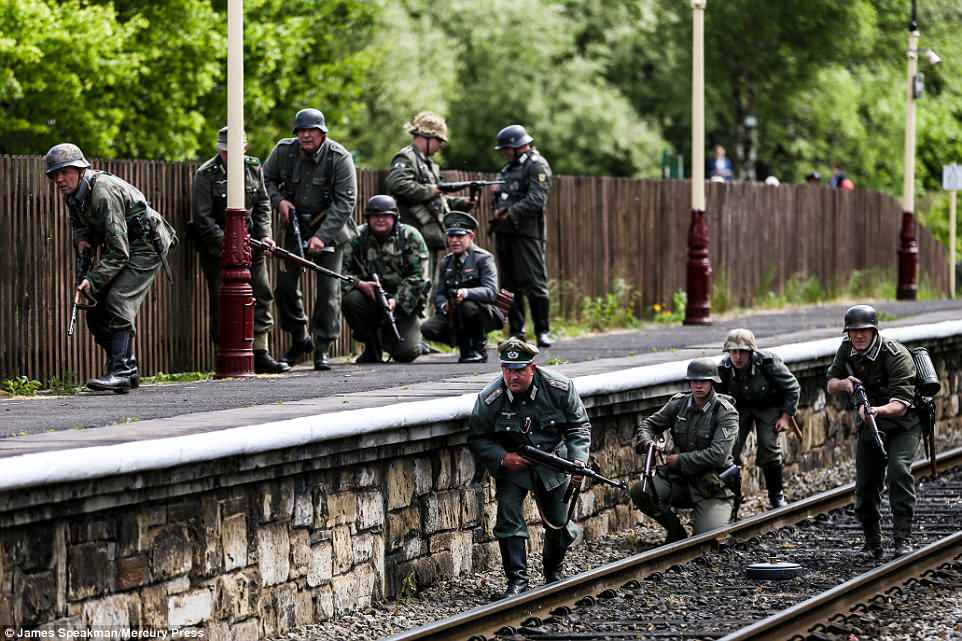 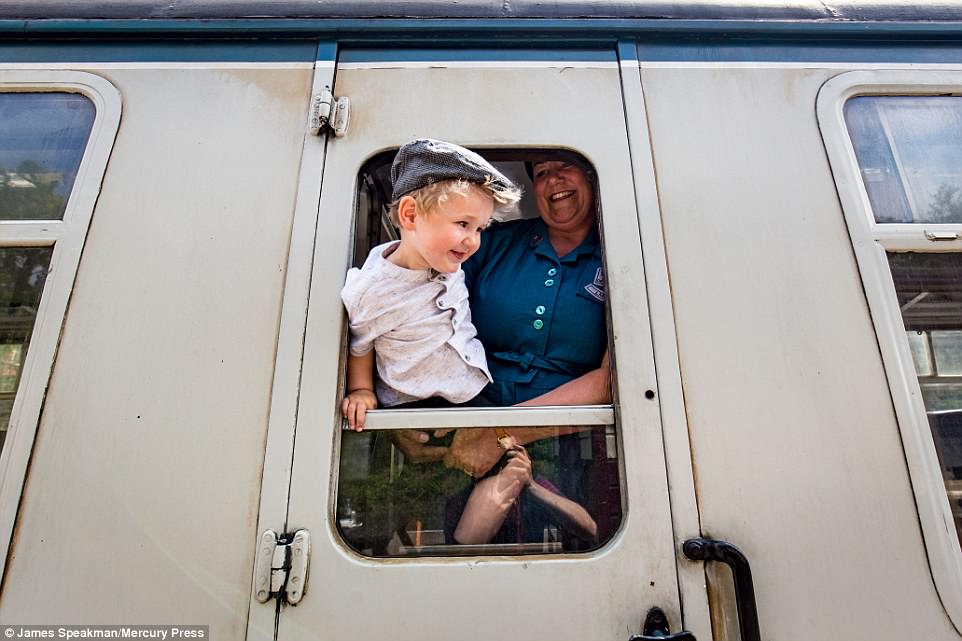 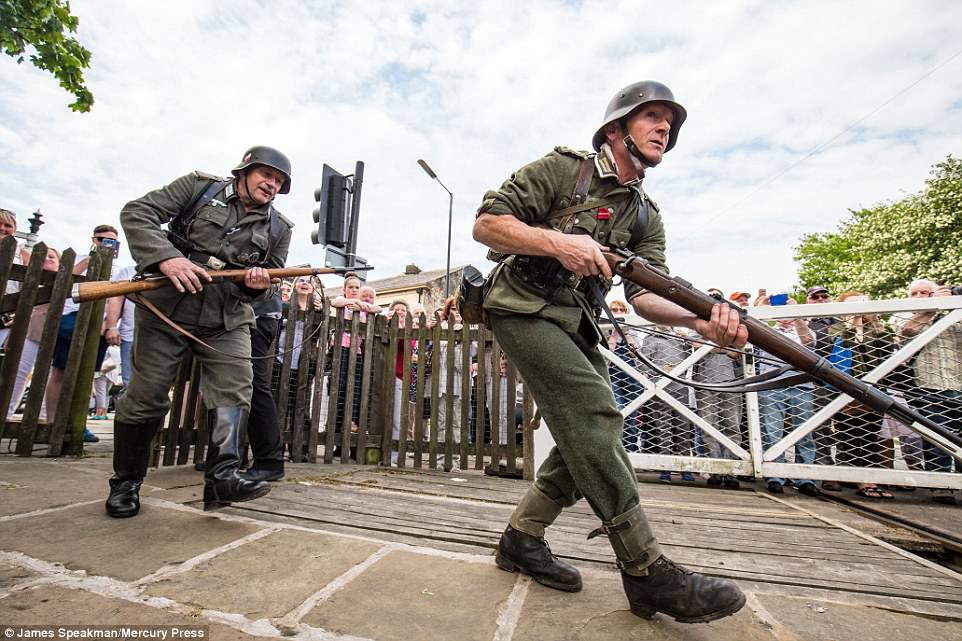 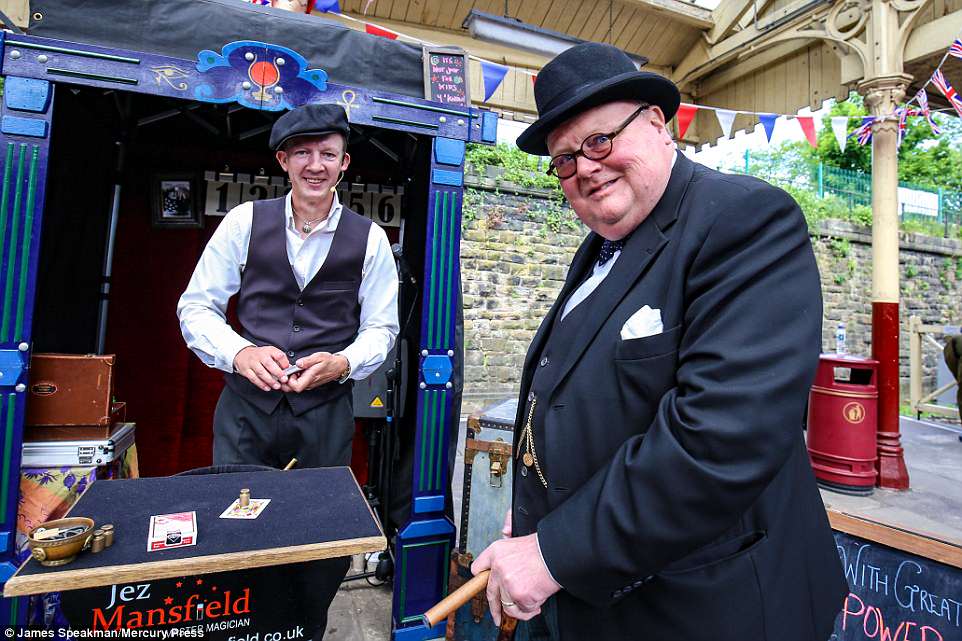 A Winston Churchill impersonator, who made speeches on the first day of the event, speaks to a magician in Bury 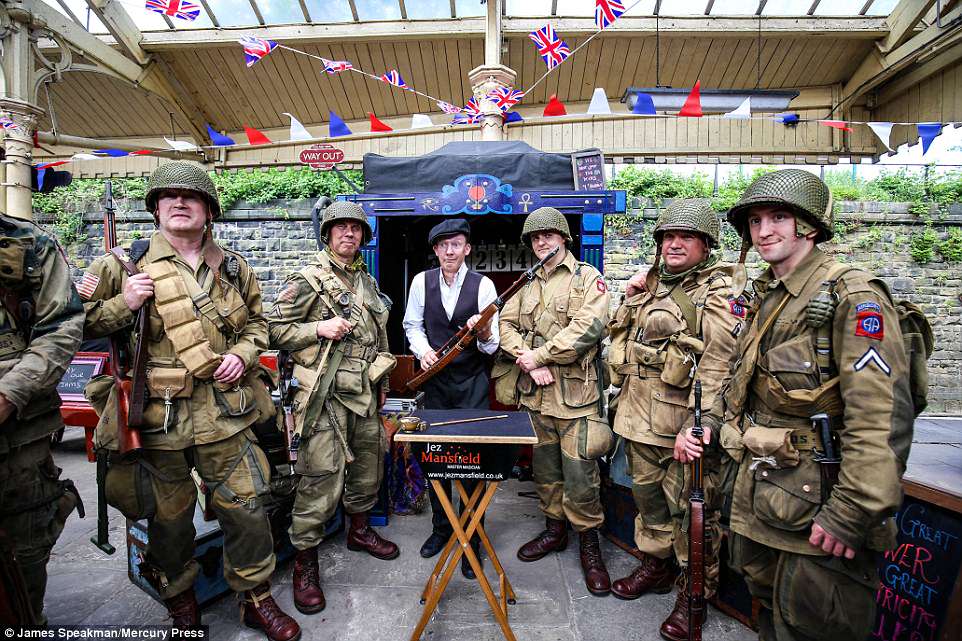 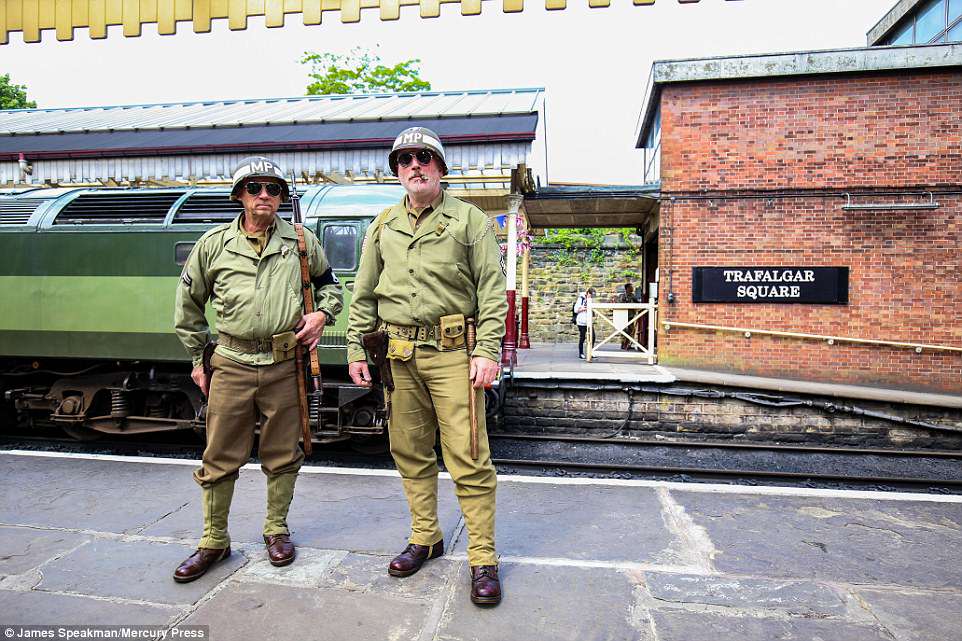 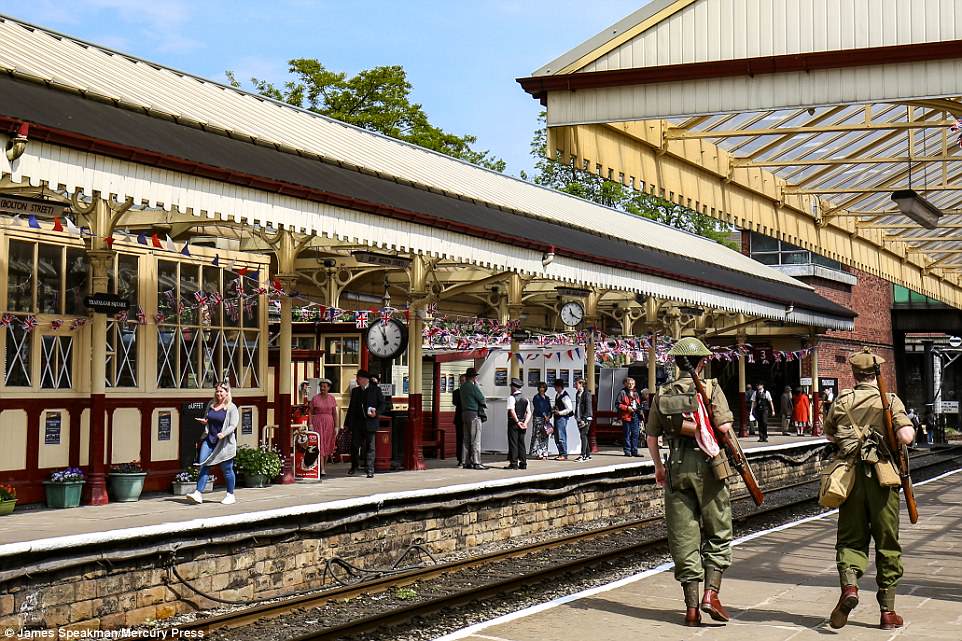 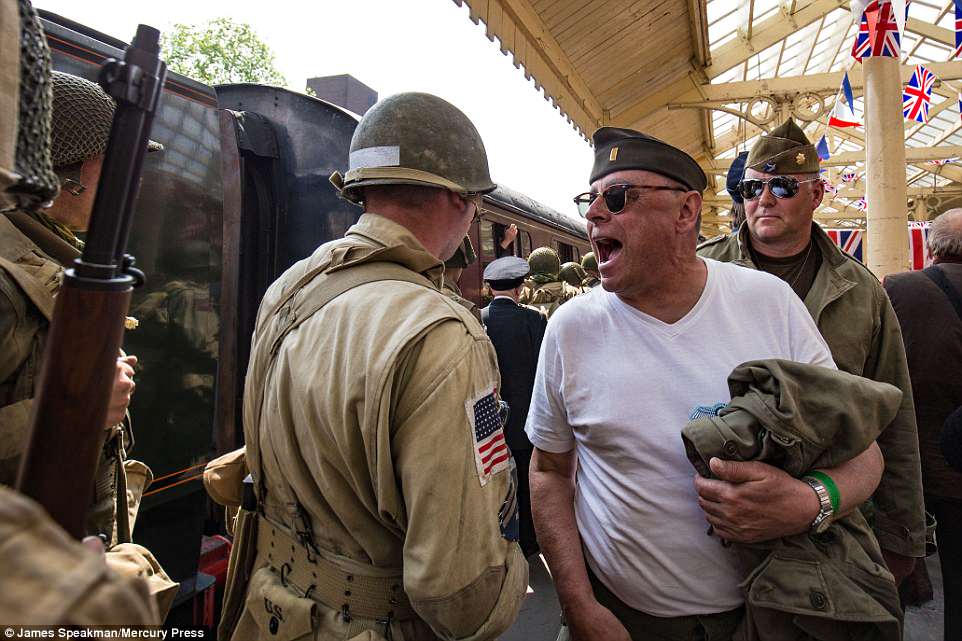 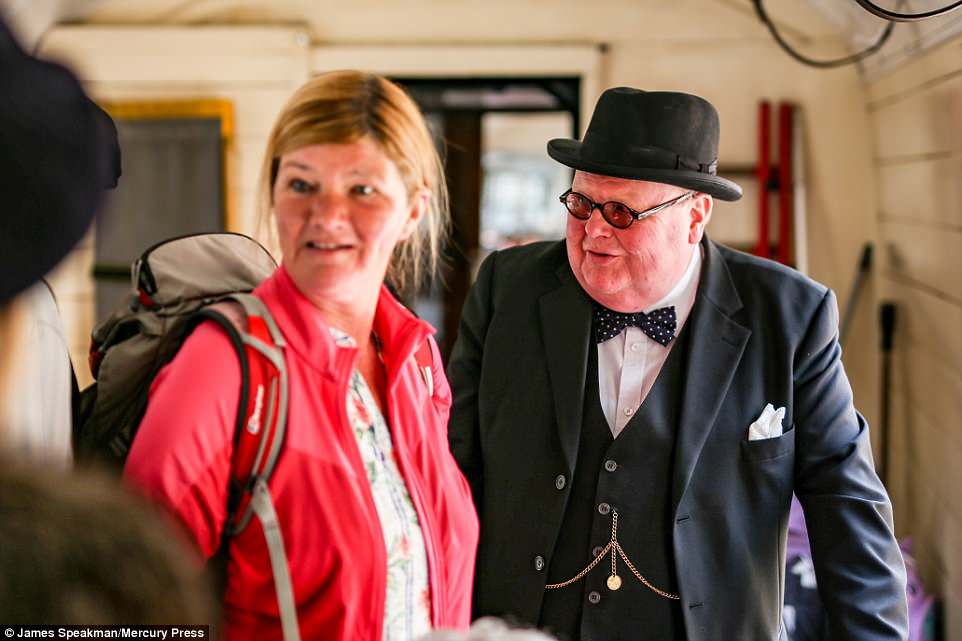 An actor playing Winston Churchill, dressed in a bow tie, meets a fan at Bury Bolton Street station at the 1940s Weekend 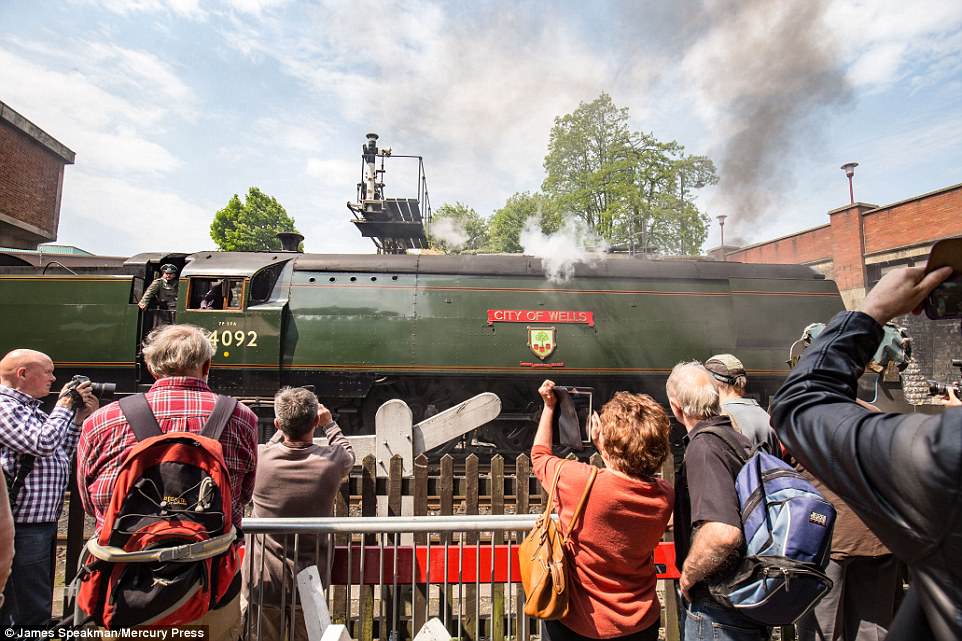 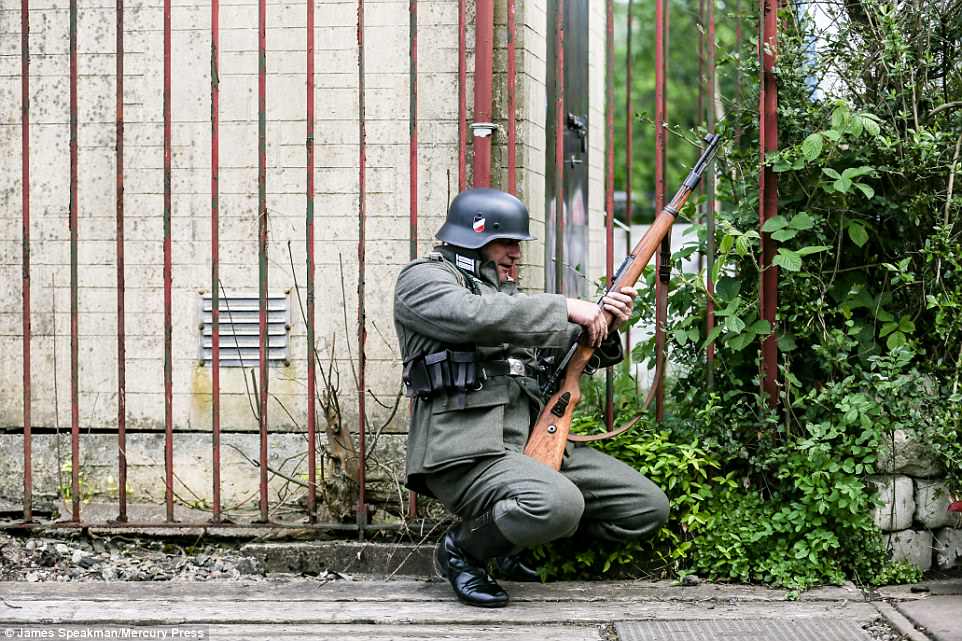 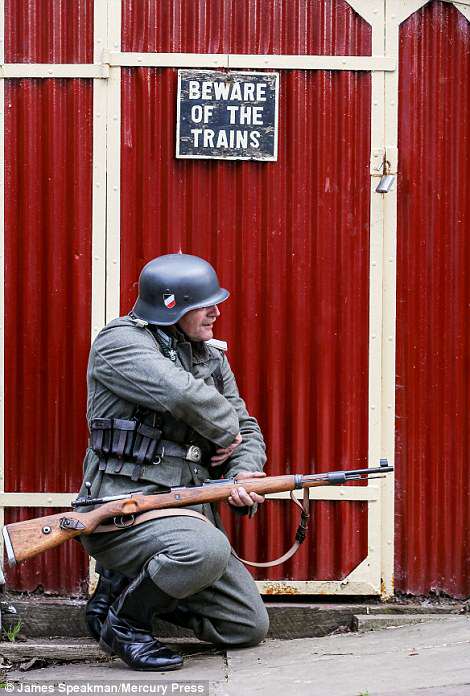 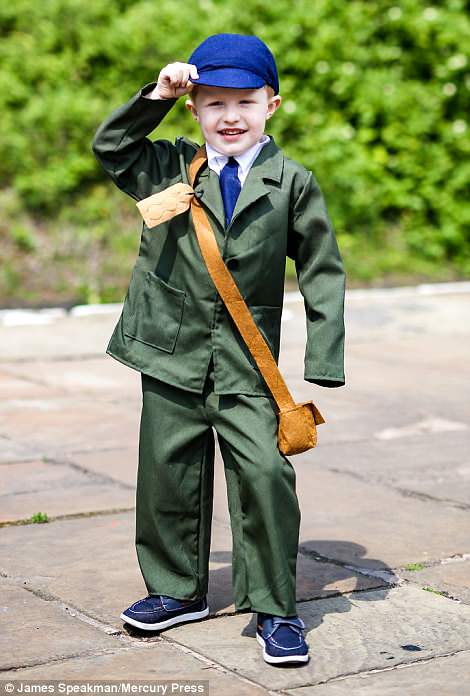 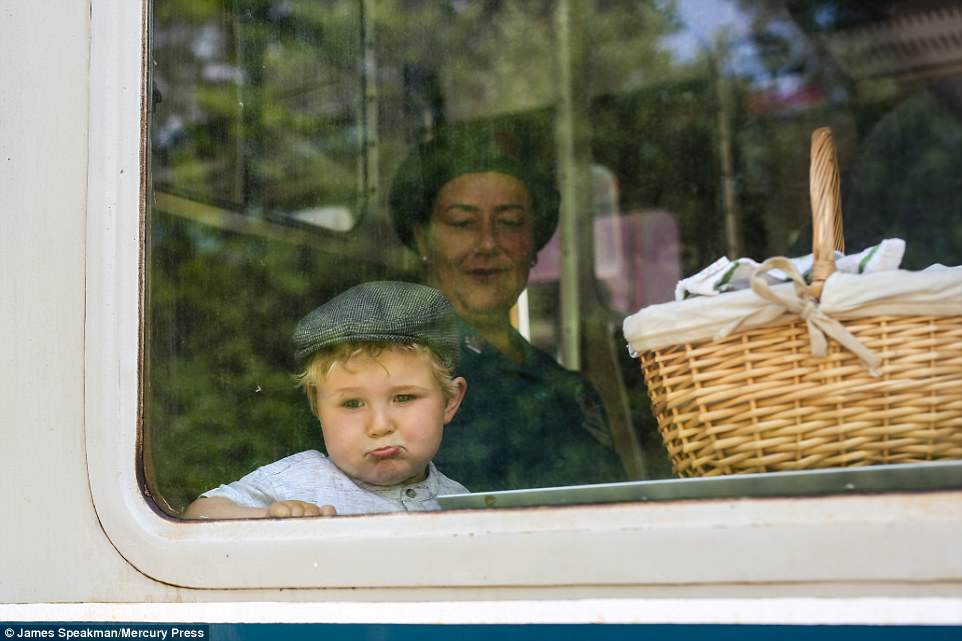 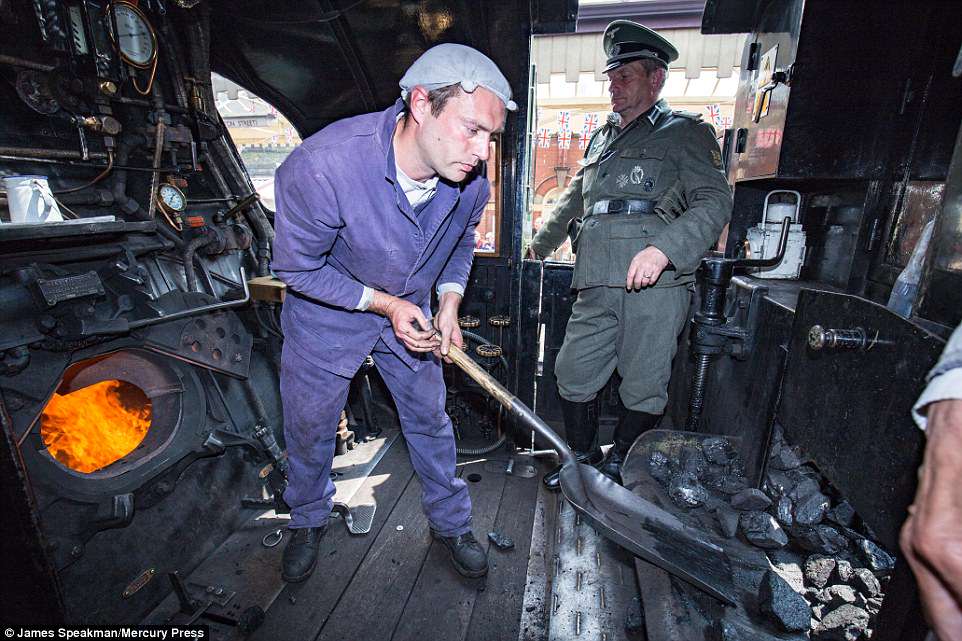 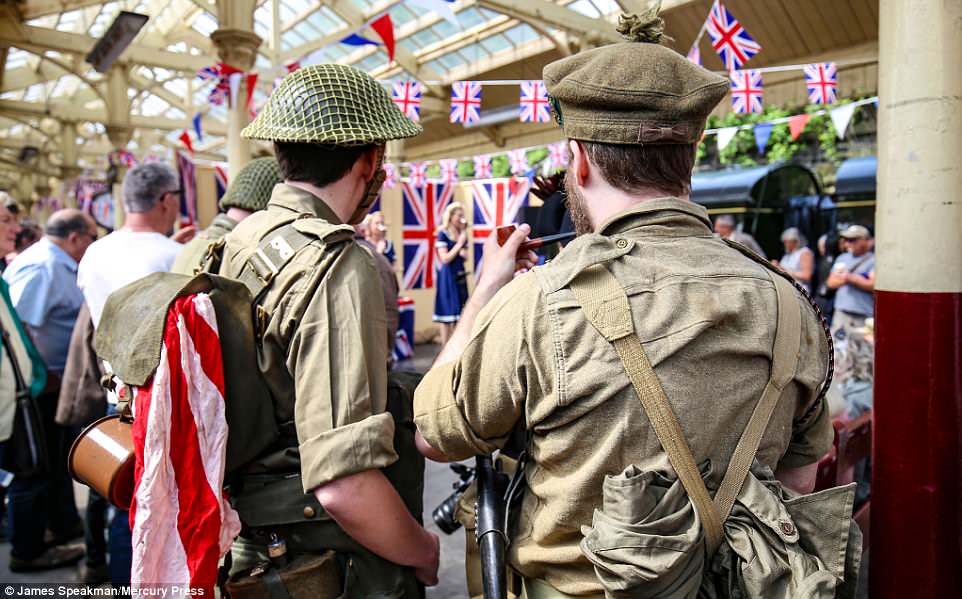 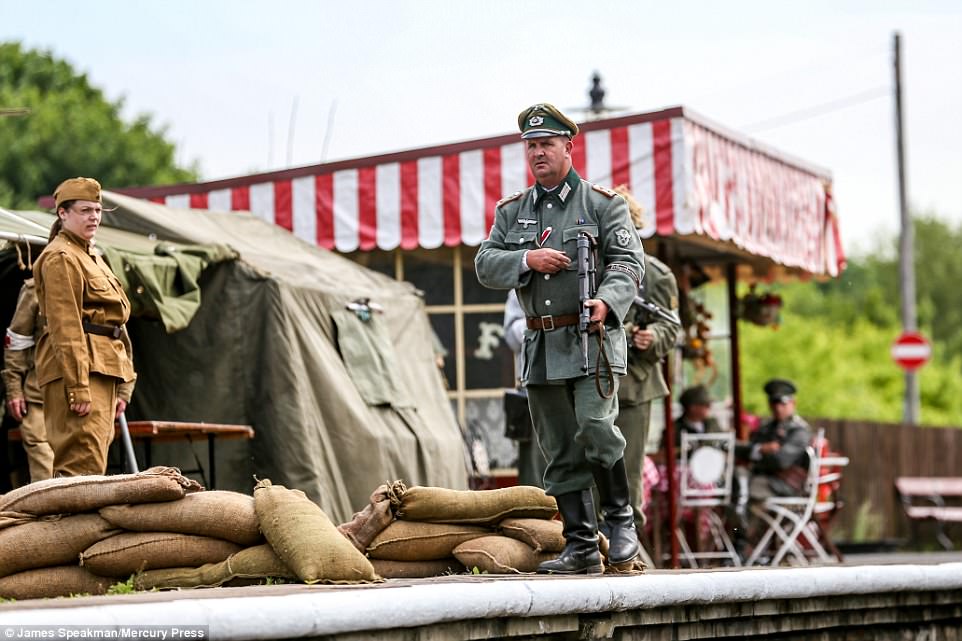 A re-enactment soldier holds a weapon at Ramsbotton, renamed Nouvion station, during the 1940s Weekend 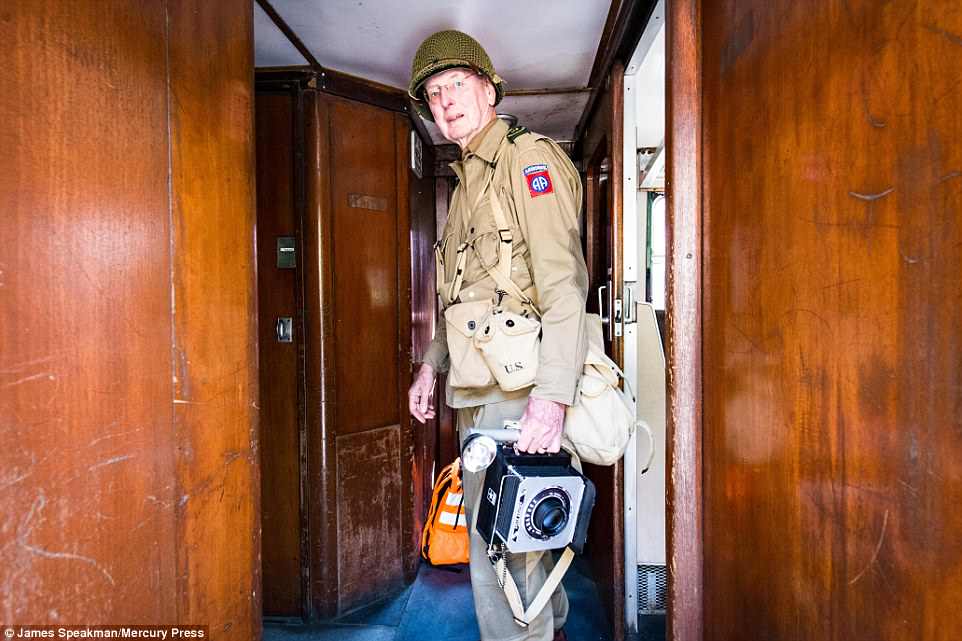 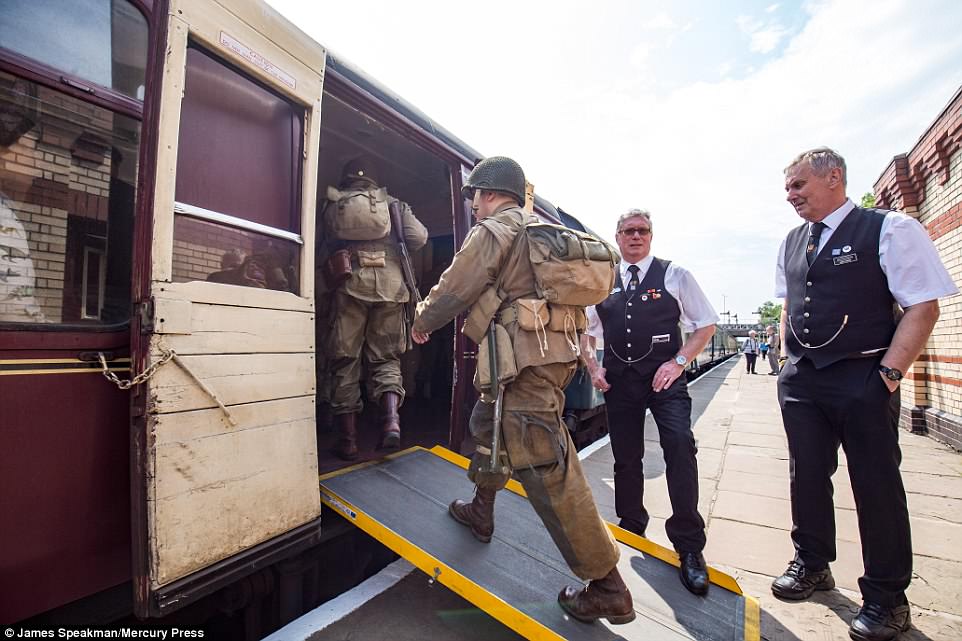