Former Collingwood premiership player Heritier Lumumba has ducked a challenge from Nathan Buckley to release his secretly-made recordings of their angry meetings in full, saying he no longer took orders from the former Magpies coach and that he was instead committed to ‘my truth’.

Lumumba released the explosive audio clips on Twitter on Tuesday evening, in which he was heard complaining to Buckley about his treatment at the club, saying he had been ostracised for speaking out about then club president Eddie McGuire’s role in a racial controversy involving Sydney great Adam Goodes.

In the audio, Buckley could be heard telling Lumumba he had gone ‘rogue’, had thrown McGuire ‘under a bus’ and questioned whether he had the best interests of the club at heart.

In response to the leak, Buckley publicly challenged Lumumba to release the secret recordings in full to give proper context to the selective grabs.

Heritier Lumumba (pictured with Shae McNamara) has released secretly-recorded audio of his confrontational meetings with then Collingwood coach Nathan Buckley, but has refused a challenge to issue it in full for proper context.

However Lumumba refused that challenge on Wednesday.

‘I have not released the full versions because it would be countless hours,’ Lumumba said in an interview with ABC television from Los Angeles.

‘So I will share my truth as I see fit.’

Lumumba said he had many more secretly-made recordings of interviews with other Collingwood and AFL officials.

‘I can say that for the last decade of my interactions that I have had within the AFL  system that I protected my legal rights because of the experiences that I have gone through,’ Lumumba said.

Lumumba, who has long complained of racism at Collingwood and more broadly within the AFL, said the club’s Do Better report on the issue did not go far enough.

‘Collingwood Football Club will always remain a club that is associated with racism.’

It has been eight years since Lumumba left Collingwood, but his campaign against the club continued this week both with the audio release and accusations that hard-core pornography was used in a team meeting, and a picture put on a noticeboard mocking gay people.

‘There are other versions of the truth that are a long way away from the way that he perceives it,’ Buckley said in response on SEN radio on Monday. 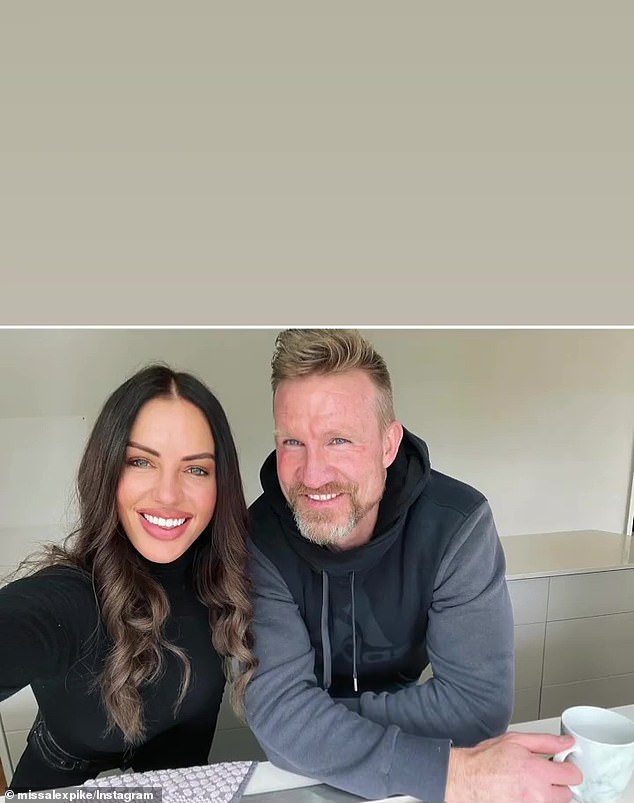 Buckley, pictured with ex-partner Alex Pike, was heard in the meeting saying Lumumba had gone rogue, conducting crusades and questioned whether he had the best interests of the club at heart.

The audio recordings come from 2014 – Lumumba’s last season with the Magpies – and addressed public comments that the defender had made about McGuire’s involvement in the controversy surrounding Adam Goodes.

After Goodes had called out a Collingwood fan for a racist comment at a game, McGuire made a comment on radio that the Swans star should be used to promote the King Kong musical.

Lumumba had gone to Collingwood’s media department requesting permission to comment publicly and that was granted, but said the club was taken aback that he criticised the club president’s statement rather than supporting it.

In the audio recording, Buckley says to Lumumba: ‘You threw him under the bus, mate.’ 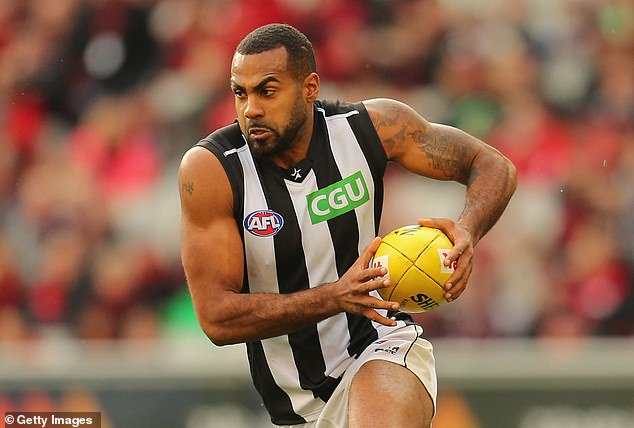 ‘You’ve become a bit of a rogue and you might call it leadership but you’ve basically gone on your own …. crusades at times.’ 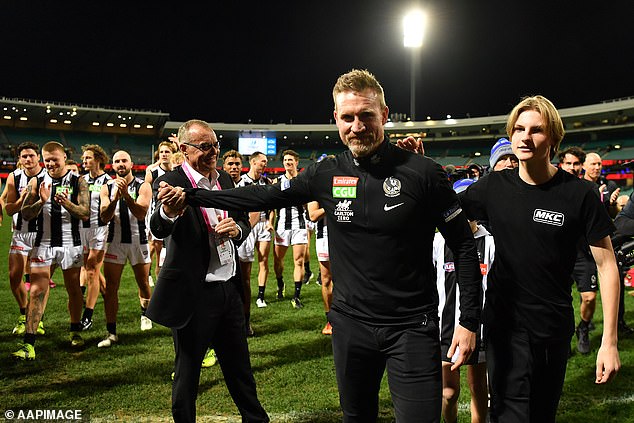 Fox Sports report that Buckley was not aware that his conversation with Lumumba was recorded, and the former coach replied to the 35-year-old’s Twitter thread demanding he release the ‘full and uncut’ version of the audio clip.

One of the ex-star’s most startling claims is that an assistant coach showed players a pornographic photo during a team meeting.

Buckley said on Monday: ‘The club have, from my understanding tried to work with Héritier and other Indigenous players, who have been part of systemic racism situations over the course of the club’s history.

‘I am happy to engage with the club however they wish, but Héritier hasn’t been satisfied with that and that’s why we are where we’re at.

‘It seems that Héritier doesn’t really want to move forward unless, I don’t know, he needs heads to roll. I don’t know exactly what he’s looking for, or what his requirements are to feel like he has been heard, because that is really what we have tried to do.

‘Other areas when we talk about – misogyny, homophobia, those cultural aspects of an organisation – football clubs have come a long way. We’re talking about things that have happened 10 to 15 years ago, and when you remove context and bring it into the current day, it sounds even more abhorrent than it would have been then.’