An online shopper was left shocked by the incompetence of a bungling delivery driver after a large bulky package was left ‘hidden’ under a doormat.

The woman, 28, returned home on Thursday to discover her Sports Direct order had been left under the mat at the entrance to her flat in Liverpool by a Hermes courier.

But as this bizarre image shows, the sizeable package was still clearly visible, creating a large lump in the mat outside the door of the apartment.

To add insult to injury, Hermes’ online tracking information informed the shopper her parcel had been left in a ‘secure location’. 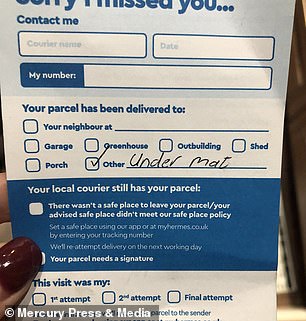 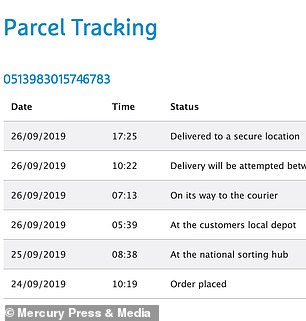 The media worker, who asked not to be named, said: ‘I had come home from the pub when I spotted the parcel, and at first I thought my eyes were playing tricks on me.

‘But no – the courier apparently really did think ‘hiding’ the package under the mat like that, leaving it clearly visible to anyone wandering past, was acceptable.

‘At the time, I laughed to myself but the next day I was quite annoyed anyone in the building could’ve spotted it.’

The woman has not made a formal complaint to Hermes, but shared the images on social media where pals commented on how funny the mix-up was.

She added: ‘The worst thing was, the reason why the parcel was so bulky was because Sports Direct had given me a free giant mug with my order. I didn’t even want the mug.’

A spokesman for Hermes said: ‘We apologise for the inconvenience.

‘We will speak to the courier to ensure this does not happen again.’