A veteran American firefighting crew flew 130 waterbombing missions over Australian bushfires before their plane crashed, killing all three of them.

The C-130 Hercules, Zeus, exploded into a huge fireball on impact near Peak View in the state of New South Wales, after losing contact with the ground at about 1.45pm on Thursday.

Fire chiefs hailed them as ‘remarkable’ and well-respected professionals with decades of experience on both sides of the Pacific.

They arrived in Australia on November 5 and have since dumped two million litres of water and fire retardant on blazes from Tasmania to NSW, flying up to eight missions a day. 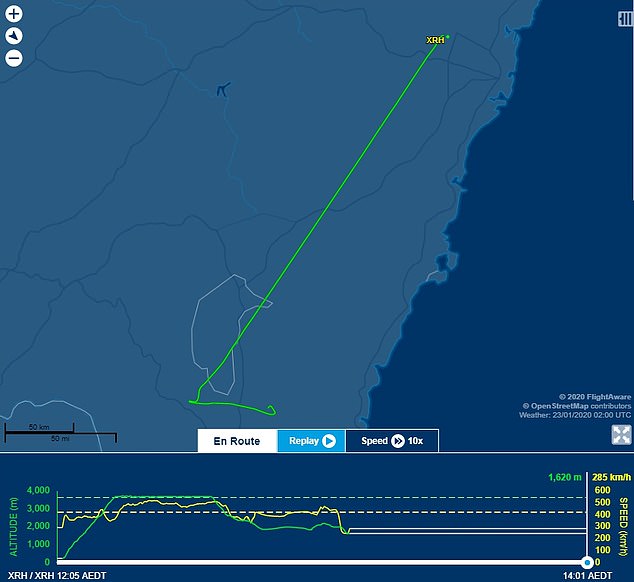 The flight path of the plane after it left Richmond, NSW, and headed for the fire front before crashing. The altitude tracker shots its sudden descent before losing contact

They never came back.

A panicked call came in to NSW Rural Fire Service command from firefighters on the ground who watched in horror as the plane went down and exploded.

‘Fire comms… message red speak to your captain. Message this is red… Crashed,’ the call began.

NSW Rural Fire Service Commissioner Shane Fitzsimmons said there was not yet any indication as to what caused the crash and an investigation is underway.

Aircraft experts believe unless the plane had a mechanical fault, there are three likely ways the plane could have been brought down. 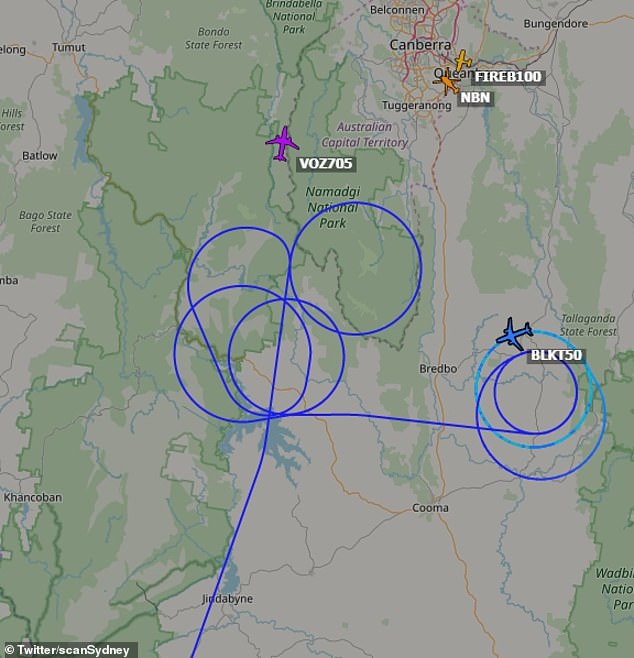 Search operations were conducted by helicopters in Peak View, north-east of Cooma

Conditions were hellish enough with temperatures above 40C and high winds that prevented waterbombing at all in other nearby fire grounds.

Piloting a waterbombing plane is also up to seven times more exhausting than flying an airliner, and takes at least three fire seasons to learn.

The decades-old plane may have been placed under so much stress that it simply fell apart and couldn’t keep flying.

Such a crash that killed three crew members happened in northern California in 2002 when another C-130’s wings fell off.

The conditions, such as heat from the fire below, could also have created so much turbulence the pilots lost control of the plane.

They could also have gotten too close and become so disoriented in the thick smoke that they slammed into the ground.

The firefighters were on a plane chartered by American firefighting company Coulson Aviation that was in Australia to help tackle the bushfire crisis.

Coulsons grounded its large air tankers after the crash, both as a standard precaution and a sign of respect for the casualties. 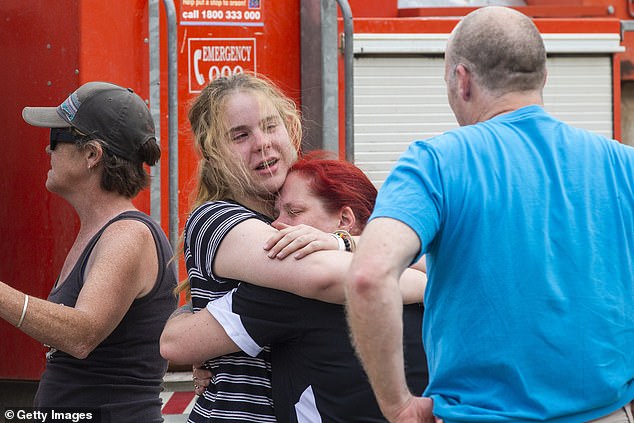 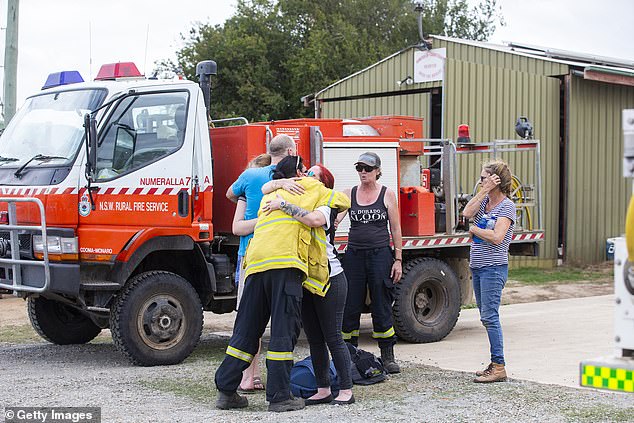 The three U.S. firefighters were experienced veterans who were well known to RFS volunteers and other emergency services

‘It is a confronting and sobering reminder of the inherent risks associated with firefighting and we’ve seen all too often this season,’ he said.

‘Our hearts are with all those that are suffering what is the loss of three remarkable, well respected crew that have invested so many decades of their life into firefighting.’

Commissioner Fitzsimmons said rescuers battled through fire and smoke with terrible visibility for hours to find the wreckage.

‘Tragically, there appears to be no survivors as a result of the crash down in the Snowy Monaro area,’ he said.

‘[The aircraft] impacted heavily with the ground and initial reports are that there was a large fireball associated with the impact of the plane as it hit the ground.’ 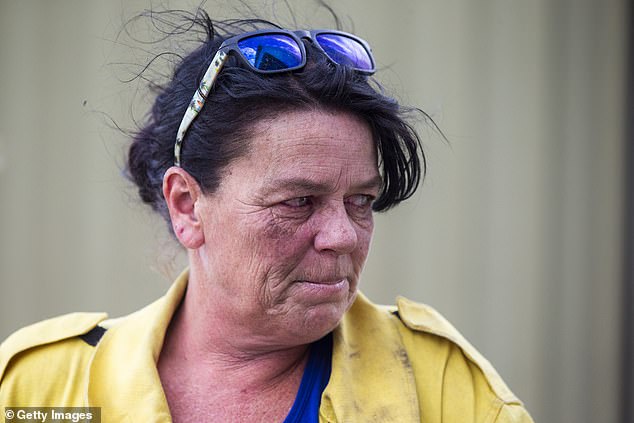 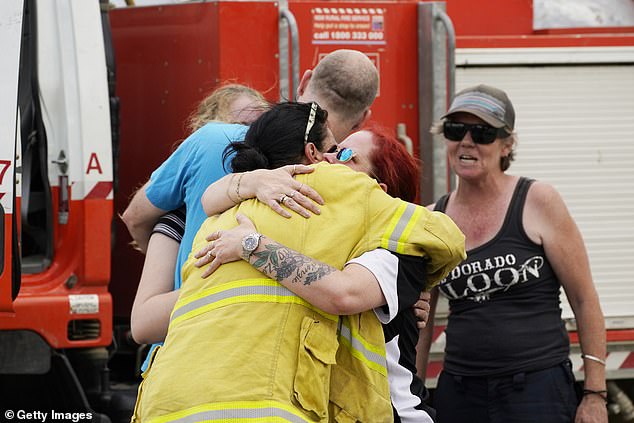 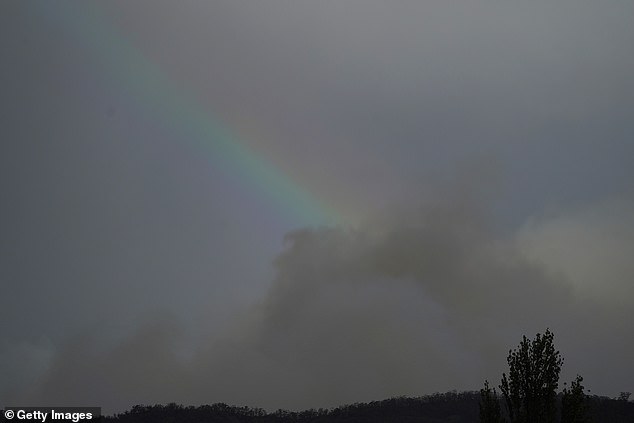 A rainbow cuts through the smoke near the crash site over the 250,000ha megablaze formed when at least four different fires joined together

U.S. firefighters received a heroes’ welcome when they arrived at Sydney Airport two weeks ago, with other passengers cheering and clapping.

About 100 firefighters were dispatched to support 159 already in Australia under a longstanding agreement between the two countries.

‘I am deeply saddened by the tragic news we received today,’ U.S. Ambassador Arthur Culvahouse said.

‘The brave Americans who died near Snowy Monaro died helping Australia in its time of need.

‘The families and friends of those who we have lost are in our thoughts and prayers. Thank you Australia for your sympathy and solidarity.’

The crash caused a fire that crews are still trying to put out before the cause of the crash, which is unknown, can be investigated.

Commissioner Fitzsimmons said investigators were looking at all possibilities including trying to rule out a fuel problem that could affect the whole fleet.

‘There is no indication at this stage of what’s caused the accident,’ he said.

An investigation by the Australian Transport Safety Bureau is underway. 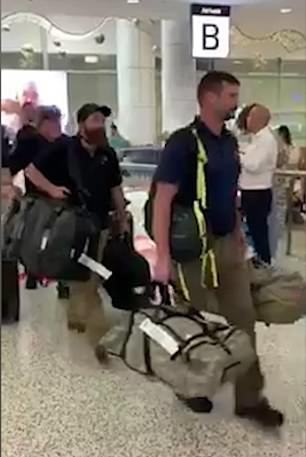 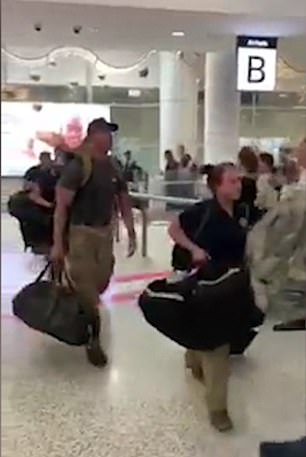 U.S. firefighters received a heroes’ welcome when they arrived at Sydney Airport two weeks ago, with other passengers cheering and clapping

NSW Premier Gladys Berejiklian offered her condolences to the families of the victims in the wake of the accident.

‘Our thoughts are not just with family and loved ones but for anyone who feels impacted by what has unfolded this afternoon,’ she said.

‘We can’t thank enough people who continue, not withstanding the conditions, to put their safety at risk to protect lives and property of others.’

‘It demonstrates the dangerous work currently being undertaken and the conditions that our firefighters are working under.’

The RFS said the area remains an active fire ground and a number of firefighting crews are currently working to contain and work around the fire.

‘As indicated, we’ve still got more than 80 fires burning around New South Wales and half are not contained,’ Commissioner Fitzsimmons said. 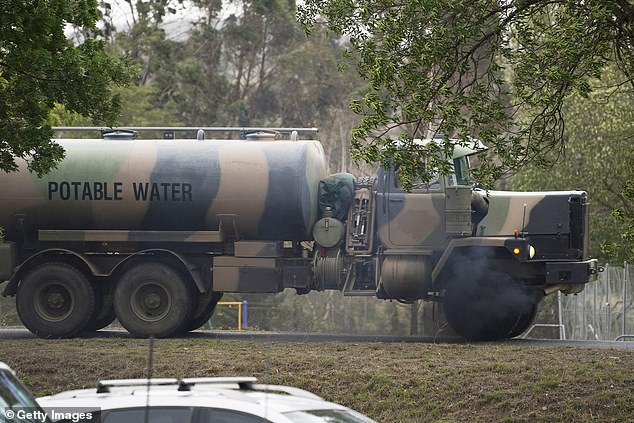 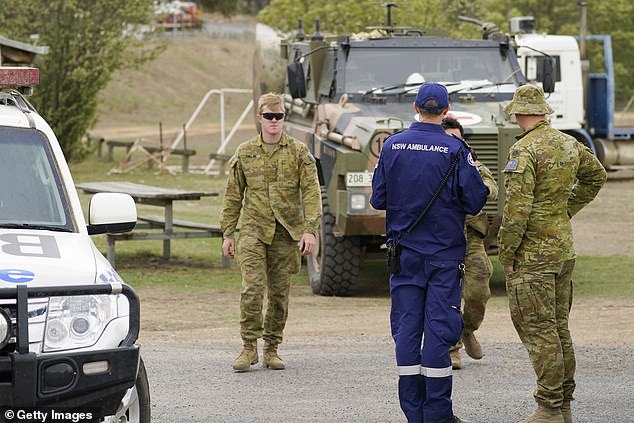 The blaze the downed C-130 was battling is a massive 240,000ha inferno where multiple bushfires joined together.

The dangerous out-of-control fire stretching from near Bega in the south to Jinden in the north with emergency warnings issued for more than a dozen towns.

Areas where it was too late to leave included Bumbo, Eurobodalla, Bodalla, Wallaga Lake, Akolele, Bermagui, Coolagolite, and everything between Moruya and Tuross Head.

Residents in Tilba and Mystery Bay, Dignams Creek, and West Narooma were urged to flee immediately.

This fire could even join with another dangerous 98,000ha fire to its north that has encircled the coastal town of Batemans Bay.

Residents in Moruya, West Moruya, Mogendoura and Wamban were warned they were at serious risk and needed to protect themselves from the intense blaze.

It was also too late to leave areas from Moruya to Tuross Head, and Bumbo, Bodalla and Eurobodalla.

The RFS said waterbombers would not be able to assist in dousing the flames because of high winds – which also made the blaze more dangerous. 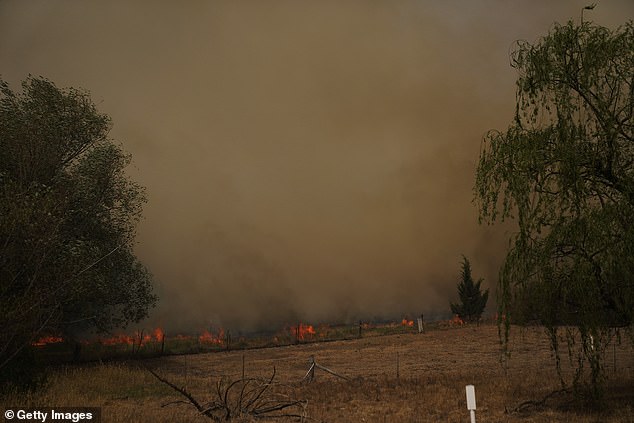 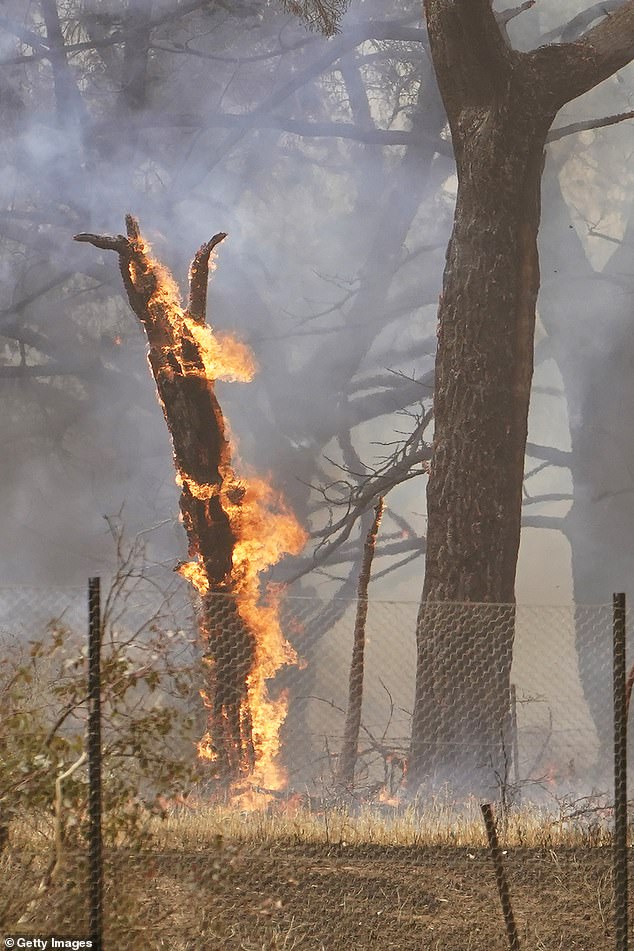 The fire on Kallaroo road in Pialligo by Canberra Airport remains at emergency level, after being downgraded overnight 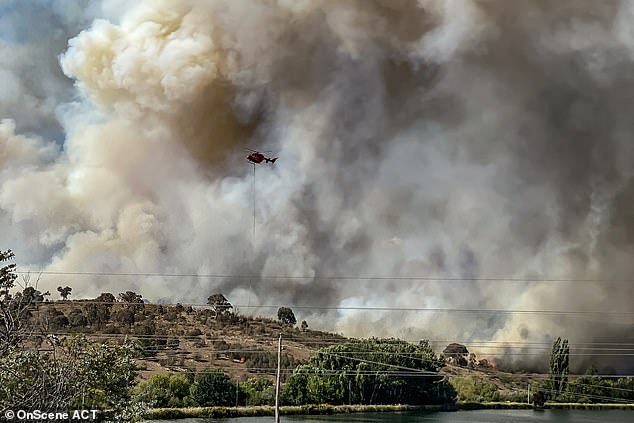 Other fires burning in the area include one threatening homes in near Canberra Airport, including in Mount Durrah, Rocky Hall and Stoves Road in NSW, and Beard, Oaks Estate and West Queanbeyan in the ACT.

Residents are on a watch and act warning level and warned to evacuate, and the fire has prompted several emergency warnings since Wednesday afternoon.

Due to the conditions Canberra Airport has been closed, with no flights arriving or departing.

Meanwhile, the Box Hill and Nelson fire is burning just 40km from the Sydney CBD and remains at watch and act level.

Residents in the Hills District have been told there is still a heightened level of threat to homes and to remain vigilant.

Shortly before 1pm, the Box Hill and Nelson fire in the Hills District of Sydney was upgraded to emergency level, as well as the Badja Forest Road at Countegany.

However the Hills District fire was quickly downgraded to watch and act.

Temperatures reached 40C in Nowra on the South Coast on Thursday, 43C in Penrith in Sydney’s west, 41C in Cessnock in the Hunter region and 42C in Bulahdelah on the mid-north coast.

Increased fire danger is a result of damaging winds in the NSW southeast, with 96km/h at Cooma and Bombala, 95km/h at Nerriga, 91km/h at Goulburn and 83km/h in Canberra.

The surge in temperature comes after days of rainfall across the entire east coast of Australia. 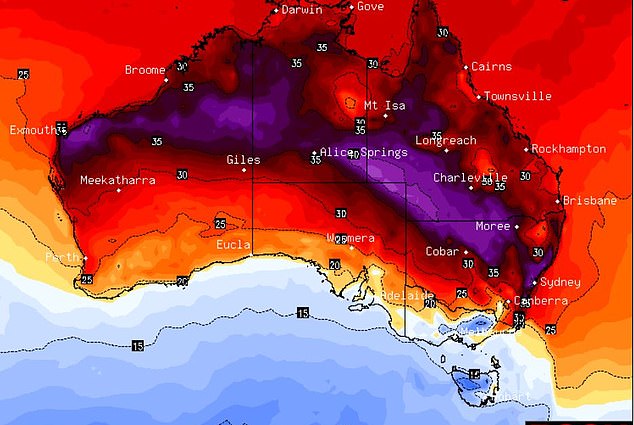 Due to the conditions Canberra Airport (pictured) has been closed, with no flights arriving or departing

The national death toll in Australia’s 2019/2020 bushfire season was 32 as of Thursday, January 23, with 24 confirmed deaths in New South Wales, three in South Australia and five in Victoria.

Robert Lindsey, 77, and Gwen Hyde, 68, were found in their burned out Coongbar home near Casino on October 9th.

The body of 85-year-old George Nole was found in a burnt out car near his home in Wytaliba, near Glen Innes.

Vivian Chaplain, a 69-year-old woman from Wytaliba, succumbed to her injuries in hospital after attempting in vain to save her home and animals from the blaze.

The body of 63-year-old Julie Fletcher was pulled from a scorched building in Johns River, north of Taree.

Barry Parsons, 58, was found in a shed at Willawarrin, near Kempsey.

A 59-year-old man was founded sheltered in a Yarrowitch water tank on November 7. He died of injuries on December 29.

David Moresi, 69, died after being involved in a traffic incident while working at the at the Gelantipy fire in East Gippsland on November 30.

Firefighters Andrew O’Dwyer, 36, and Geoffrey Keaton, 32, died on December 19 after a tree fell on their truck while they were travelling through Buxton, south of Sydney.

Samuel McPaul, 28, was battling a blaze in Jingellic, in Green Valley, about 70km east of Albury on the border of NSW and Victoria, on December 30 when a ‘fire tornado’ caused his 10-tonne firetruck to roll.

The body of 69-year-old Ron Selth was found in his Charleston home, which was destroyed by the Cudlee Creek blaze on December 21.

Dairy farmer Patrick Salway, 29, and his father Robert, 63, died trying to save their property in Cobargo, near Bega, on December 31.

A 70-year-old man, named by local media as Laurie Andrew, was found dead outside a home at Yatte Yattah, west of Lake Conjola.

The body of a 70-year-old man was found in a burnt vehicle on a road off the Princes Highway at Yatte Yattah on the morning of New Year’s Day.

The body of a 62-year-old man was found in a vehicle on Wandra Road at Sussex Inlet about 11.30am on New Year’s Day.

A body, believed to be a 56-year-old man, found outside a home at Coolagolite, east of Cobargo on New Year’s Day.

An off-duty RFS firefighter, believed to be 72-year-old Colin Burns, was found near a car in Belowra after the New Year’s Eve fires swept through.

Beloved great-grandfather Mick Roberts, 67, from Buchan, in East Gippsland, was found dead at his home on the morning of New Year’s Day.

Fred Becker, 75, was the second person to die in Victoria. He suffered a heart attack while trying to defend his Maramingo Creek home.

David Harrison, a 47-year-old man from Canberra, suffered a heart attack defending his friend’s home near Batlow on Saturday, January 4.

A 71-year-old man was found on January 6. Police have been told the man was last sighted on December 31, 2019 and was moving equipment on his property in Nerrigundah.

An 84-year-old man who stayed to defend his home in Cobargo, NSW, dies in hospital three weeks after fire hit. His pet dog Bella, who stayed by his side as fires raged, was also killed in the disaster.

Forest Fire Management firefighter Mat Kavanagh, 43, was killed Friday January 3 when he was involved in a two-car crash on the Goulburn Valley Highway.

Bill Slade, a 60-year-old father of two from Wonthaggi was fighting fires with Parks Victoria at Omeo when he died on January 11. He has been remembered as one of the longest serving, most experienced and fittest firefighters.

Well-known outback pilot Dick Lang, 78, and his 43-year-old son, Adelaide surgeon Clayton Lang, died in the Kangaroo Island bushfire after their car was trapped by flames.