An army sniper who miraculously survived being shot through the neck and carried on fighting for 90 minutes is selling his bravery medal for £100,000 so he can buy a house.

Lance Corporal Simon Moloney was convinced he was about to die after a bullet hit him in the throat during a firefight in Afghanistan in 2013.

He said he spent 10 minutes preparing for death until a medic stemmed the bleeding and stabilised him.

Minutes later he was back on his feet and fought the Taliban in searing 40C heat, pinning down enemy snipers and helping save his comrades.

Now he has made a ‘big but logical’ decision to sell the medals at auction to afford a home in his native St Albans, Hertfordshire, where average prices are £390,000.

Lance Corporal Simon Moloney was shot in the neck while serving in Afghanistan with the Household Cavalry in 2013, but continued fighting for 90 minutes after receiving treatment 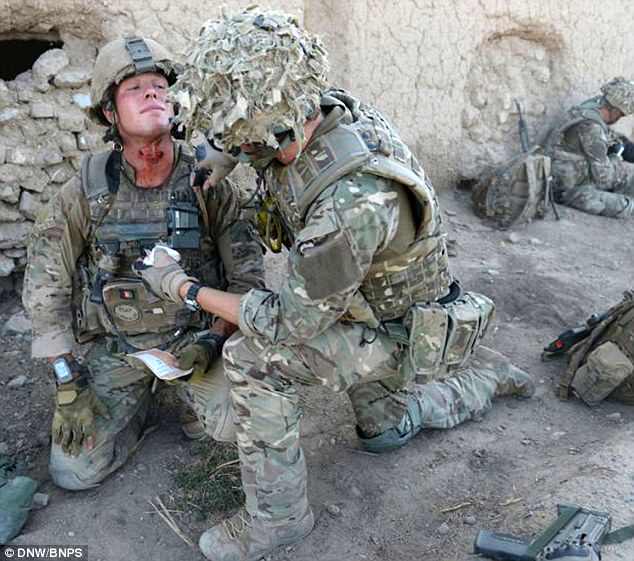 The bullet that hit his neck missed an artery at ‘trillion-to-one’ odds and medic Wesley Masters, pictured treating L/Cpl Moloney, was able to stem the bleeding 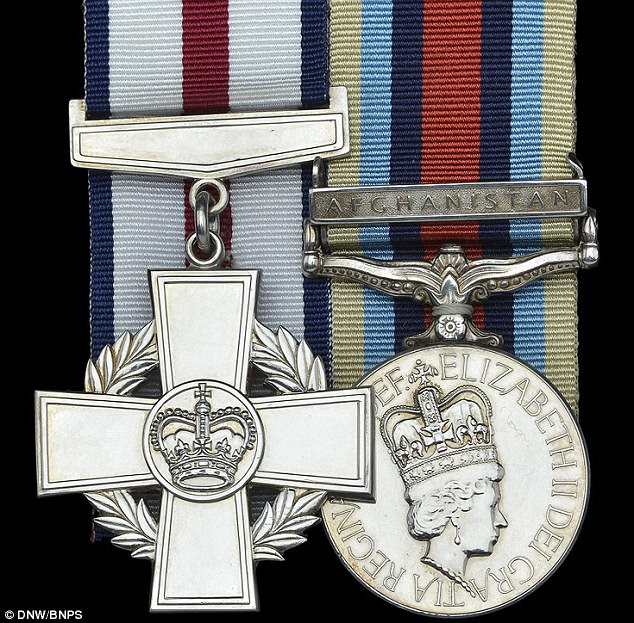 He was awarded the Conspicuous Gallantry Cross, pictured left, for his bravery in action, helping to save comrades by pinning down enemy snipers. He also received an Operational Service Medal for participating in the campaign and is selling both for around £100,000 to afford a house 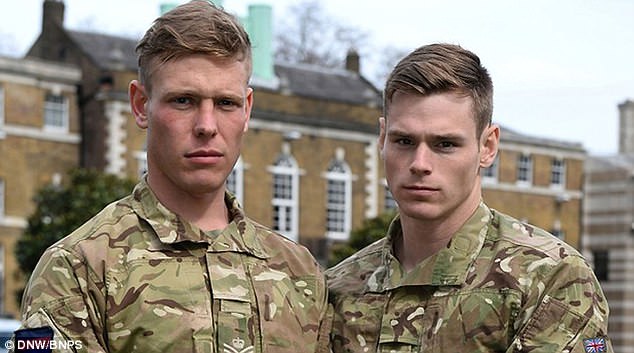 Masters, pictured right with L/Cpl Moloney, risked his own life to save the soldier by running 400 yards through heavy fire. He was awarded the Military Cross

A surgeon who later operated on L/Cpl Moloney told him the bullet had missed his vital arteries and airways by millimetres at odds of a trillion-to-one.

L/Cpl Moloney was serving with the Blues and Royals, part of the Household Cavalry, on his second tour of Afghanistan when he was nearly killed in July 2013 in Helmand province.

He was part of a 12 man troop flown into a Taliban stronghold to seek out insurgents.

The sniper and a machine gunner positioned themselves on the roof of a building to provide a watch and cover fire.

But an enemy sharpshooter picked him out and shot him through the neck.

The bullet entered the left side of his neck, missed his trachea and carotid main artery and exited through the right side.

The near-fatal blow knocked L/Cpl Moloney off the sloping roof. He plunged 8ft towards the ground but luckily a goat broke his fall.

Medic Wesley Masters risked his life to dash 400 yards under heavy fire to provide first aid. One grenade went off just 12ft away from them. 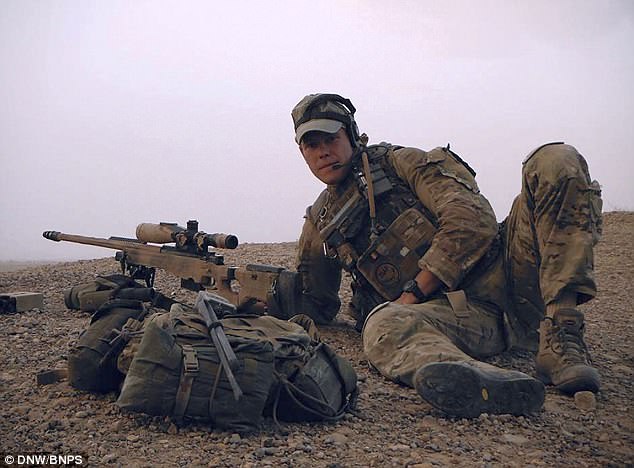 L/Cpl Moloney, pictured, served 10 years in the Army but is now trying to buy a house in Hertfordshire where average prices are around £390,000 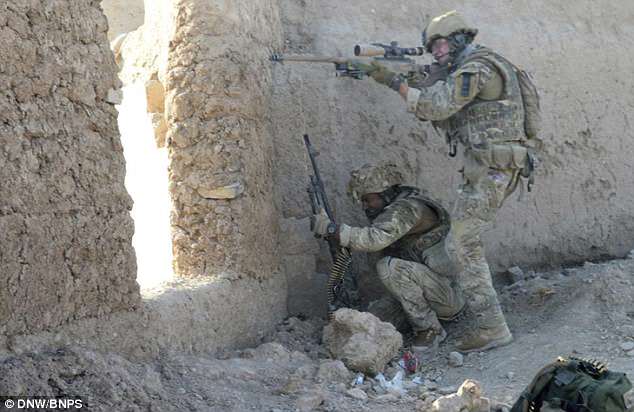 The soldier, pictured in action in Afghanistan, said it was a ‘big decision’ to sell the medals but also a ‘logical’ one

He was later awarded the Military Cross for his bravery.

L/Cpl Moloney said: ‘Looking back it was one of the best days of my life but for five or 10 minutes I was pretty sure I was going to die.

‘It felt as though I had been punched, there was blood pouring from my neck.. Adrenaline had kicked in so I wasn’t in pain. I was annoyed I had been shot because I knew who had shot me.

‘It was the longest 10 minutes of my life. But then the medic said I was going to be alright and i had absolute faith in him. 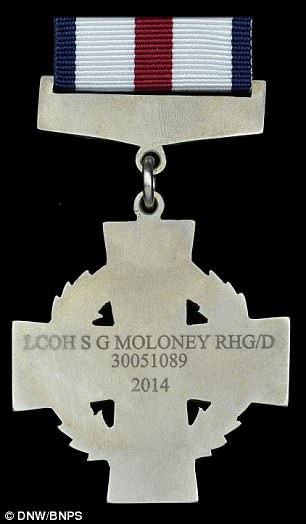 His Conspicuous Gallantry Cross, pictured, is second only to the Victoria Cross in terms of awards for bravery in the Armed Forces

‘I should be dead by now but I am in the position I am now because of everybody else who was there that day. I had good blokes around me.

‘I was bleeding quite a bit but after about five minutes of treatment I was back on my feet and was back on it.

‘The surgeon later told me that he couldn’t make the same incision with a scalpel as the one the bullet that hit me did without killing me.’

He said he has made the ‘logical’ decision to sell the Conspicuous Gallantry Cross he was awarded for the action to give him a better future, which includes getting on the property ladder.

L/Cpl Moloney lives in St Albans, Hertfordshire, which is described as one of the mos difficult places in Britain outside London for first time buyers, with the average property price around £390,000.

He said: ‘I am incredibly proud of my medals and what they represent. It has been a big decision to sell them but also a logical one.

‘The money I hope to raise by selling my medals if life changing for someone in my position and is purely to give me and my future family a better life.

‘I will 100 per cent use it to get on the property ladder.

‘I rent at the moment and I will look to buy somewhere, a house, with the idea of letting it out grow it on until I need it.’

The Conspicuous Gallantry Cross is the second highest award for gallantry in battle, with only the Victoria Cross ranking higher.

His is one of only 59 CGCs awarded since the decoration was instituted in 1993.

It will be sold along with his Operational Service Medal with an Afghanistan clasp by London auctioneers Dix Noonan Webb who have given it a pre-sale estimate of between £80,000 to £100,000. 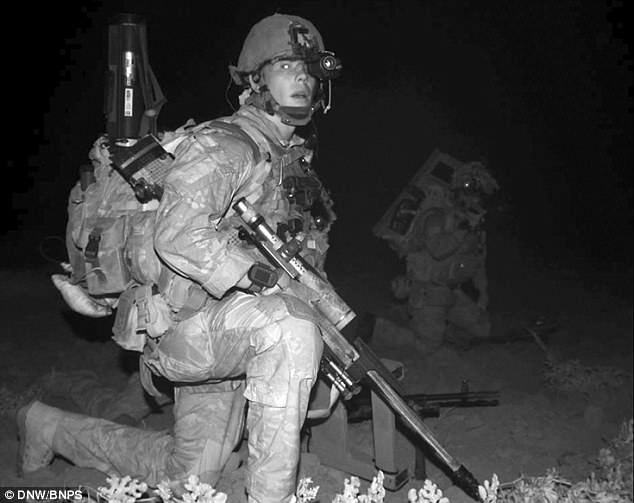 L/Cpl Moloney, pictured, said he feared he would die for around ‘five or ten minutes’ after he was shot but the day went on to be ‘one of the best of his life’

Pierce Noonan, managing director at Dix Noonan Webb, said: ‘Simon Moloney is a quintessentially British hero who talks about his extraordinary brush with death in Afghanistan with a calm, modest detachment that fills me with admiration.

‘The story of how he fought on for an hour and a half after receiving treatment for a wound that came within millimetres of killing him is truly inspirational.’

Part of the citation for L/Cpl Moloney’s CGC reads: ‘Shouting through the effects of his throat injury and over the crack of enemy sniper rounds, Moloney passed critical target information to win the fire-fight.

‘Moloney continued fighting for a further 90 minutes until, against his will, he was extracted by helicopter.

‘Without his gallantry and skill in the ruthless suppression of the enemy, it is likely his troop would have sustained multiple casualties.’

The sale takes place in London on May 9.