Nick Watchorn endured over 20 years of psychological trauma after arriving to the scene of Australia’s worst massacre on April 28, 1996 – when 35 innocent adults and children were hunted down and killed by lone gunman Martin Bryant.

Bryant’s bloody rampage started when he drove to the Seascape Guesthouse in Tasmania, where he murdered owners David and Sally Martin with a military-style semi-automatic rifle.

He then headed to the Port Arthur historic site where he had lunch before opening fire on guests in the Broad Arrow cafe, gift shop and carpark.

His trail of destruction took the lives of 35 adults and children, injuring another 23, and prompted historic gun control legislation under the John Howard government. 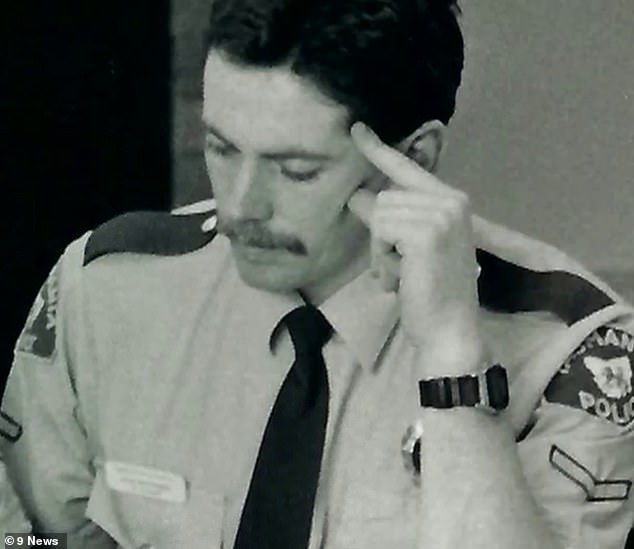 Mr Watchorn (pictured), who was a 31-year-old ‘confident and cocky’ rookie cop at the time of the massacre, arrived to the help persevere the crime scene 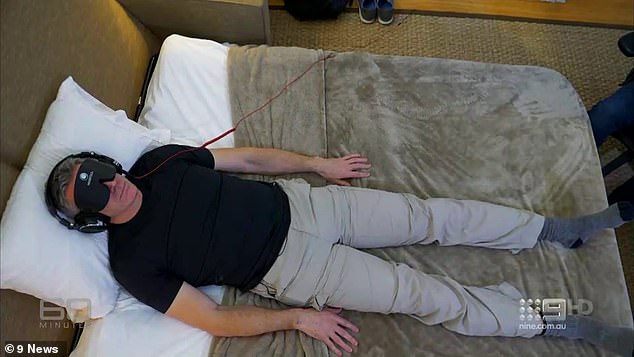 After stopping at nothing to heal his severe PTSD, Mr Watchorn now credits the party drug with helping him completely overcome the mental scars of the past 20 years.

Mr Watchorn, who was a 31-year-old ‘confident and cocky’ rookie cop at the time of the massacre, arrived to the help persevere the crime scene.

‘It was eerily quiet. I was wondering across the parking lot scoping out what the situation was,’ he told 60 Minutes.

‘Then I heard a gunshot, I know it was in the distance. I was racked with fear because I had no idea whether I was in the sights of that gun or not.’

Mr Watchorn said he then walked into the Broad Arrow Cafe to shelter from the gunman.

‘So I went up the stairs and I opened the door, and all I could see were bodies – at the tables, on the floor, against the door,’ he said.

‘I could feel myself wanting to shut down.’

Mr Watchorn said the harrowing experience not only destroyed his family and career in the police force, but left him with years of mental suffering.

‘I fought a long time against PTSD, and I got so tired in the end that I gave up. No matter how hard you try to push it down, it just keeps coming up,’ he said. 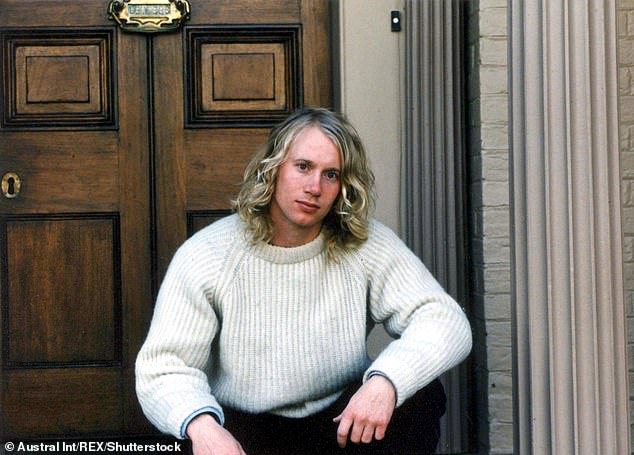 Martin Bryant has never offered an explanation for his actions, but there is speculation his murders were sparked out of retribution for grievances and others were collateral damage 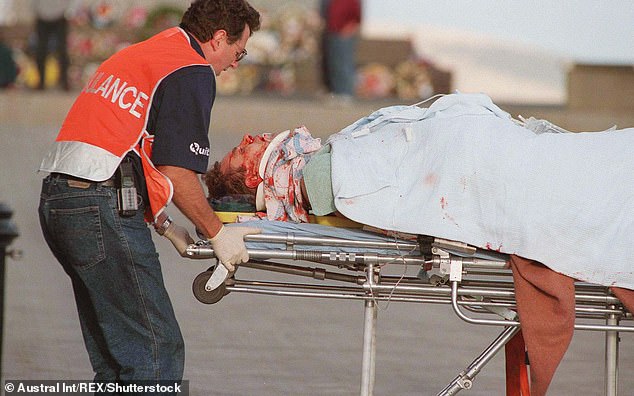 Bryant’s trail of destruction took the lives of 35 adults and children, injuring another 23, and prompted immediate tightening of gun laws 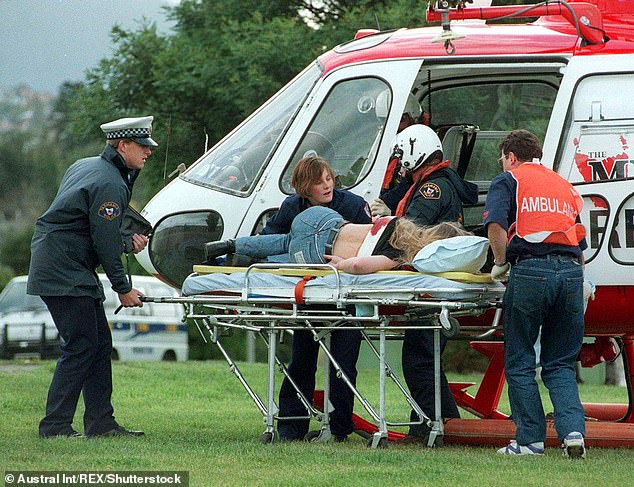 ‘The most significant part of that memory is what I felt, not what I saw. What I felt was absolute fear.

‘When I was in the cafe I just wanted something to pick me up and take me out of there.’

Mr Watchorn lost his career as a police officer – and his marriage ended – after his PTSD spiraled out of control.

He spent two years travelling around Australia, before ending up in San Francisco, in the United States, where he lived on a cocktail of alcohol and antidepressants.

‘It got to the point where I wasn’t even sure if I really wanted to live anymore, and that was really scary,’ he said.

Then in 2018, Mr Watchorn’s psychiatrist recommended he enrol in a $40million drug trial examining the use of MDMA – commonly known as ecstasy – to treat patients with PTSD.

Mr Watchorn was given 120 milligrams of pure, lab-produced MDMA on his first day of treatment.

Psychologists Eric Sienknecht, who guided an apprehensive Mr Watchorn through three eight-hour therapy sessions, believes the drug will ‘change the face of psychiatry’. 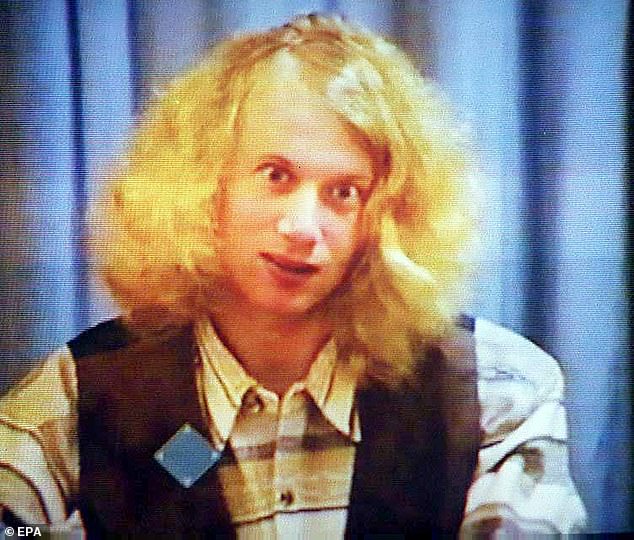 ‘Under the influence of MDMA, someone is able to have access to traumatic memories and re-experience them,’ Mr Sienknecht said.

‘But they’re able to think clearly and creatively about them and gain new insight and understanding into the memories.’

Mr Watchorn described the radical drug trial as ‘incredible’ and praises it for curing his PTSD and depression.

‘I get a little anxious sometimes but it’s not something I’d ever consider medicating or thought was intrusive to my life,’ he said.

‘It was different, everything wasn’t grey and scary,’ he said, describing what he saw under the influence of the drug.

‘I’m looking into the cafe and what I remember of how horrific it was – this time there was translucent images of [the victims] stepping up and out of their bodies.

‘They were all very relaxed and calm. They started to walk away through the walls and it kind of looked peaceful.

‘There was an older couple walking through the wall towards me, and the elderly gentleman nodded and said “you can go now”.

‘I just felt the weight of all those years just pour out of me. It was such a wonderful moment. That was the start of the really important healing for me.’

Mr Watchorn said his therapy taught him not to ignore his past, but to become at peace with the horrors he saw at Port Arthur.

‘There’s tough times… but I get through that, and it’s nothing like what my old life and my old head used to be like,’ he said.

The Multidisciplinary Association for Psychedelically Studies (MAPS) hopes to have MDMA available for prescription medication by 2022.

‘When MDMA is combined with psychotherapy it can have this kind of benefit, but not on its own.

‘We don’t want people to think they can take ecstasy at a rave and expect their PTSD to be healed – that’s not what we’re seeing in the clinical trials.’ 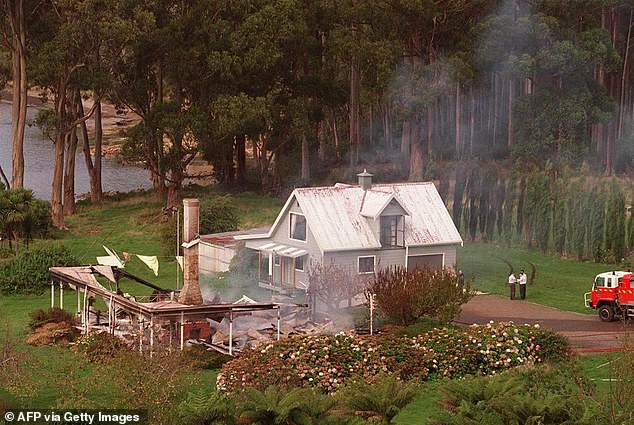 Mr Watchorn said he walked into the Broad Arrow Cafe (pictured) to shelter from the gunman, before he saw dozens of dead bodies laying on the floor

Two-thirds of patients who have received MDMA no longer suffer from PTSD.

‘It’s hard to be sceptical when you see the dramatic and sometimes seemingly miraculous effects of the medicine in combination with the psychotherapy,’ Mr Sienknecht said.

Martin Bryant’s trail of destruction took the lives of 35 tourists and locals, some children, and injured another 23.

Special ops police from Melbourne had called for a bulldozer to lead their planned raid of the bed and breakfast property where Bryant was holed up.

But the heavy machinery wasn’t needed as he was forced out after 18 hours by a fire. He was screaming with his clothes alight as he was taken into custody and to hospital for treatment.

Bryant has never offered an explanation for his actions, but there is speculation, including from investigators, that his murders were sparked out of retribution for grievances and others were collateral damage.

He will die at Hobart’s Risdon Prison.

Timeline of the Port Arthur Massacre and aftermath

He then heads to Port Arthur historic site, where he has lunch at the Broad Arrow Cafe before opening fire. Shooting with purpose, he hunts down victims as he moves through the cafe, gift shop, carpark and elsewhere around the site.

He takes a hostage and drives back to the guesthouse where he holds siege throughout the night.

April 29 – Police surround the house and capture Bryant after an 18-hour standoff when the house catches fire and Bryant runs out with burns to his body.

Police announce 35 people were killed in the massacre and 18 wounded.

Reeling from the unprecedented killings – the worst mass shooting in Australian history – Tasmania’s political parties agree on an immediate tightening of gun laws.

April 30 – Bryant is charged with his first count of murder in a hospital bedside hearing.

May 5 – Bryant is transferred to Risdon Prison.

May 7 – Tasmania outlaws semi-automatic and military-style guns and magazines capable of holding more than five rounds.

May 10 – At a special summit convened by Mr Howard, federal, state and territory police ministers sign an agreement to introduce new uniform gun laws, including bans on types of semi-automatic and self-loading rifles and shotguns, and a stricter licensing regime. The federal government also plans a massive, publicly funded buyback scheme to take guns off the streets.

September 30 – Bryant appears in the Tasmanian Supreme Court amid historic security precautions. He pleads not guilty to 72 charges which include 35 murder charges.

October 15 – The first 1000 surrendered guns are melted down and destroyed under new state laws.

November 7 – Bryant switches non-guilty plea to guilty on all 72 charges, including 35 murder charges. The move spares survivors from having to testify.

November 22 – Chief Justice William Cox sentences Bryant to 35 life sentences for the murder charges and 37 sentences of 21 years for all other offences and orders he remain in prison for the term of his natural life.

– Further restrictions of firearms trafficking and handguns are brought in after a shooting spree at Monash University where a licensed pistol owner killed two students and wounded five more.