Tributes have been paid to one of the last surviving crew members of the iconic Second World War midget submarines who has died aged 95.

Heroic Sub-Lieutenant Bruce Clarke was awarded the Distinguished Service Cross for his role in the daring Operation Foil in the Far East in August 1945 which helped shorten the war with Japan.

He was part of a daring crew of just four men on the XE.5 midget submarine which snuck undetected into Hong Kong harbour to cut the undersea telephone lines running between Hong Kong and Singapore.

Trained diver SLt Clarke left the submarine to place a limpet mine on the target but almost severed his finger after getting it caught in an anchor.

Despite being in excruciating pain he completed his crucial task and the mission was a resounding success, forcing the Japanese to use radio messages which were easier for the Allied codebreakers to intercept.

Japan formally surrendered to the Allies on September 2, just weeks later, after the dropping of two Atomic bombs.

Edinburgh-born SLt  Clarke spent time post-war in India and Kenya where he met his wife Joan but settled in Bournemouth, Dorset, in 1967, where he lived until his recent death. 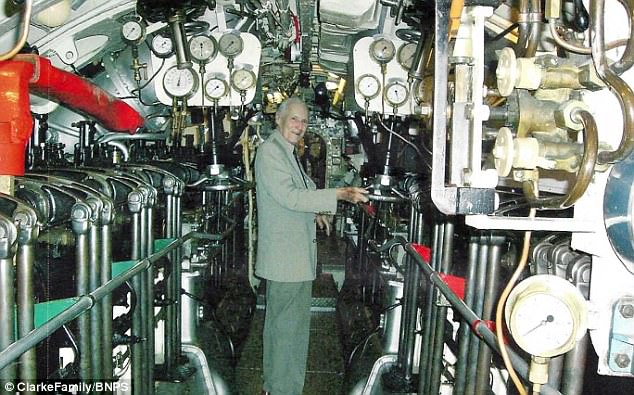 Trained diver SLt Clarke left the submarine to place a limpet mine on the target but almost severed his finger after getting it caught in an anchor. He is pictured visiting the midget submarine preserved at Gosport in 2008

Commanding officer Lieutenant H.P. Westmacott commended S/Lt Clarke for his ‘courage’ and ‘fortitude’ during the operation.

He said: ‘Whilst trying to clear the grapnel (small anchor), S/Lt Clarke had caught his finger in the cutter, cut it very deeply and fractured the bone.

‘It is impossible to praise too highly the courage and fortitude which enabled him to make his entry into the craft in this condition.

‘Had he not done so, apart from becoming a prisoner, it is probable the operation would have had to be abandoned for fear of being compromised.’

He initially served on destroyers escorting convoys in the North Sea and in the Mediterranean then later took part in Operation Torch, the Allied invasion of Northwest Africa. 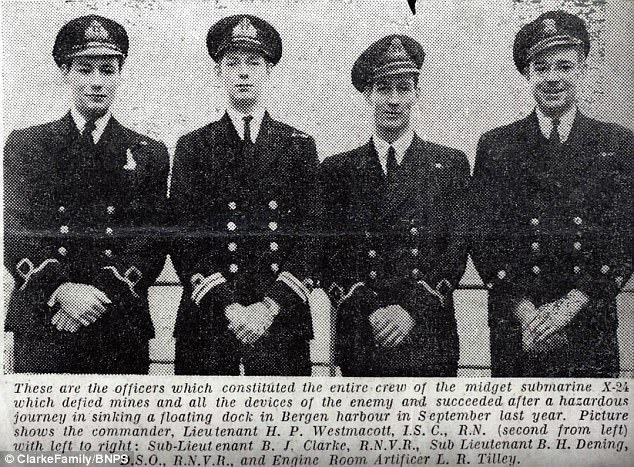 The son of a naval officer, SLt Clarke was born in Edinburgh in 1922 and joined the navy as a 19-year-old in 1941. He is pictured far-left 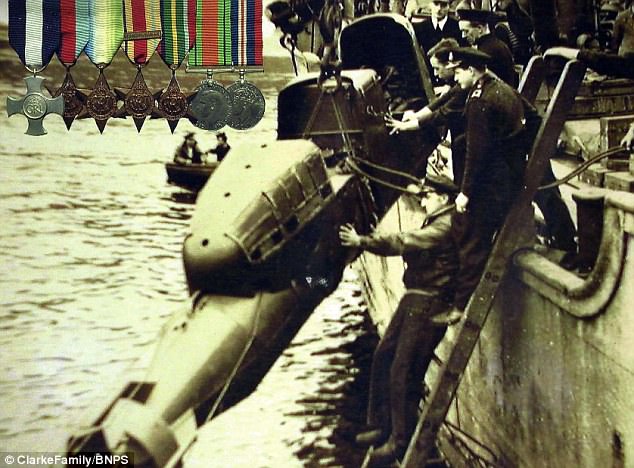 In 1943 he volunteered to join the crew of the fledgling Royal Navy midget submarines and undertook training in Scotland.

A small fleet of six XE midget submarines were built in 1944 and they had a crew of just four men, typically a lieutenant in command with a sub-lieutenant as deputy, an engine room mechanic and a seaman.

They carried 20-pound limpet mines which were attached to the target by the qualified diver in the crew.

During Operation Foil, the XE.5 crew were towed into position by the submarine HMS Selene.

What were Operations Sabre and Foil?

The aim was to force the Japanese into using radio — meaning their communications would become vulnerable to interception by the allies.

Operation Sabre targeted the Hong Kong to Saigon cable and was tasked to submarine XE4.

The vessel was towed to within 40 miles of the Mekong Delta by HMS Spearhead.

XE4 then scoured the ocean floor for the two telephone cables and eventually snagged one using a grapnel.

The submarine managed to drag it around 10 feet off the sea bed and Sub-Lieutenant K.M. Briggs used a cable cutter to sever it.

The second cable was later located and cut by Sub-Lieutenant A. Bergius.

Operation Foil targeted the cables connecting Hong Kong to Singapore and was tasked to submarine XE5, which was towed into position by HMS Selene.

Lurking beneath the waves off Lamma Island, XE5’s divers were forced to work in thick mud and under the constant threat of oxygen poisoning.

After a number of repeated attempts the seamen were still not completely certain that the cable had been cut.

It was not until after the Japanese surrendered on September 2 1945 – following the dropping of atomic bombs on Hiroshima and Nagasaki – that it was confirmed the telephone cables had been severed.

SLt Clarke was demobilised in 1946 and worked as a tree planter in India before travelling to Kenya where he joined the Overseas Civil Service and met his wife Joan.

They married in 1955 and lived there for another 12 years before relocating to Bournemouth, Dorset, in 1967.

Together, they restored antique china, porcelain and furniture until Joan’s death in 1982.

His son-in-law, retired solicitor Kim Orton, 60, who cared for Bruce in the last years of his life, said: ‘Bruce never really mentioned the war like so many people of his generation. 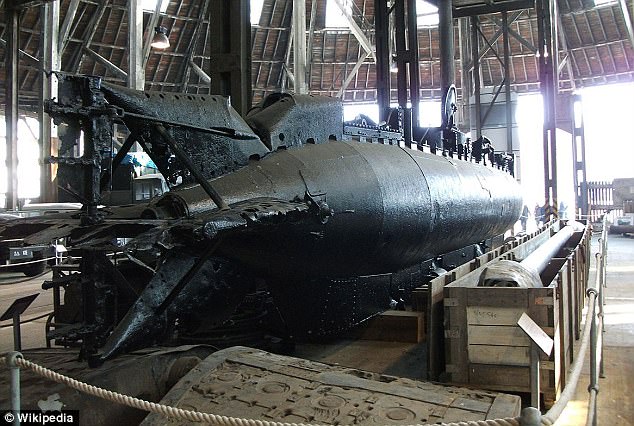 An XE class midget submarine now on display at Chatham 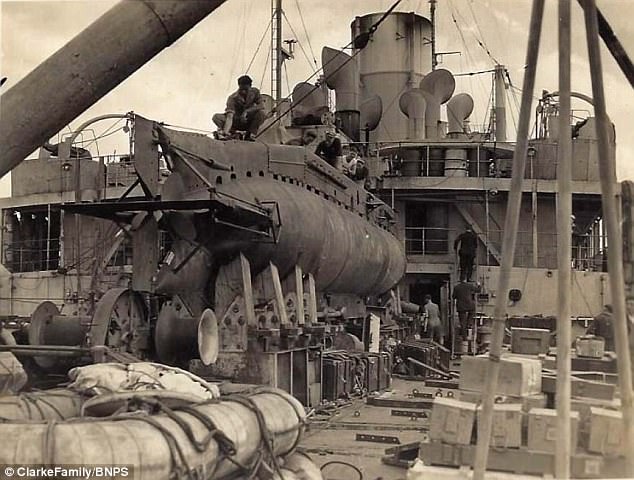 ‘He didn’t see himself as a hero, just someone doing his duty.

‘He was British through and through, proud of his country.

‘But he was also an adventurer who went to live in India and Africa after the war.

‘We believe he was one of the last surviving midget submarine crew members and his daughter Sue and I are deeply saddened by his loss.’

SLt Clarke was a long-standing Freemason and was chaplain of the Dorset Lodge for many years.

Richard Merritt, Provincial Grand Master for Dorset, said: ‘Brother Clarke was typical of so many unsung heroes within the Masonic Order.

‘His military career, extreme bravery in the face of the enemy, personal charm and life-long modesty exemplify the principles observed and practised by Freemasons throughout their lives.’