A father-of-three who once rescued his neighbour from a burning house has been spared a prison sentence for taking advantage of a Good Samaritan and repeatedly stealing from his bank account.

Darren Kyle Hunter, 31, was involved in an incident at Spearwood Tavern in April 2017 and was helped by a man who offered his iPhone so Hunter could call a taxi, the Western Australia District Court heard on Friday.

But Hunter stole the phone, then accessed the victim’s bank account through an app to pay the taxi driver.

Darren Kyle Hunter, 31, helped a neighbour steal $17,000 after a Good Samaritan lent Hunter his phone so he could call a taxi

Hunter later showed his neighbour how to withdraw money from the victim’s ATM, prompting the neighbour to steal $500.

The neighbour then accessed the victim’s account to redraw $17,000 and withdrew $2000 before the transaction was reported as fraudulent.

Around the same time, a further $500 was transferred into a bank account belonging to Hunter’s wife.

Hunter initially denied any involvement but later pleaded guilty to one count of stealing and four counts of fraud. 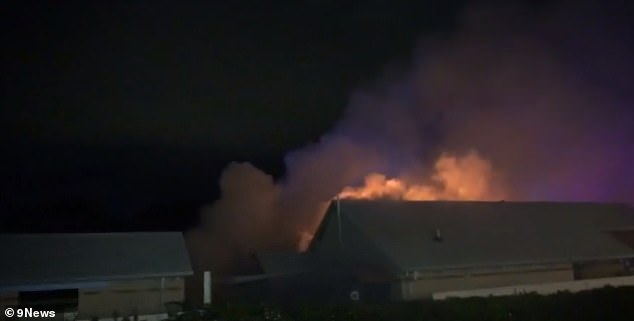 He initially made headlines last year after he smashed a glass door and dragged an unconscious 60-year-old woman from a burning home in Mandurah.

The court heard Hunter, who has a criminal record and has been an alcohol and drug user, had turned his life around since September 2017 when he had a naltrexone implant.

‘I do accept that you’ve had some real problems coping and you’ve felt left out of the world a great deal,’ Judge Wendy Gillan said.

‘But the psychologist quite rightly points out your strong desire to make positive changes in your life.

‘But also, you did take advantage of someone who was doing you a kindness, and your offending did continue over some time, and you did bring in your neighbour.’

Hunter was sentenced to 18 months behind bars, suspended for 12 months.

‘You’ve done very well to turn your life around. I’d like to see you continue with that. I don’t want to see you back here,’ Judge Gillan said.