Hero: Michael Davidson, 37, a father-of-four and a 15-year veteran of the FDNY, was pronounced dead on Friday

The New York City firefighter who died battling a blaze which broke out on the set of a film starring Edward Norton and Bruce Willis ran out of oxygen as he was trying to escape the smoke-filled basement of a building in Harlem late Thursday.

Michael Davidson, 37, of Harlem’s Engine Company 69, became separated from his crew as 175 firefighters were battling the blaze at a building in Harlem late Thursday.

When his comrades managed to reach safety outside of the building, they noticed that Davidson was missing, the New York Post reported.

Davidson, a married 15-year-veteran with the FDNY and father of four young daughters, was reportedly the first fireman into the building and suffered serious injuries after becoming separated from his crew.

A mayday call was made and Davidson was found. He was rushed to Harlem Hospital but died at 12.16am.

The fire was reportedly spotted by fellow Hollywood star Edward Norton, who saw smoke coming from the basement as the crew were setting up to shoot a night-time scene, New York Post reports.

The film crew were inside the building on the ground floor, with actors dressed up in period costumes for a scene in the movie, set in the 1950s, when it broke out in the basement of 773 St Nicholas Avenue.

The five-story building is home to the former St. Nick’s Jazz Pub, which closed in 2011. 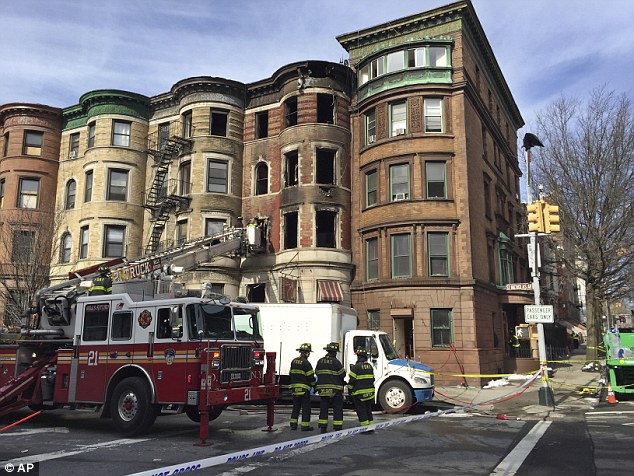 Davidson, a married 15-year-veteran with the FDNY and father of four young daughters, was reportedly the first fireman into a Harlem building and suffered serious injuries after becoming separated from his crew 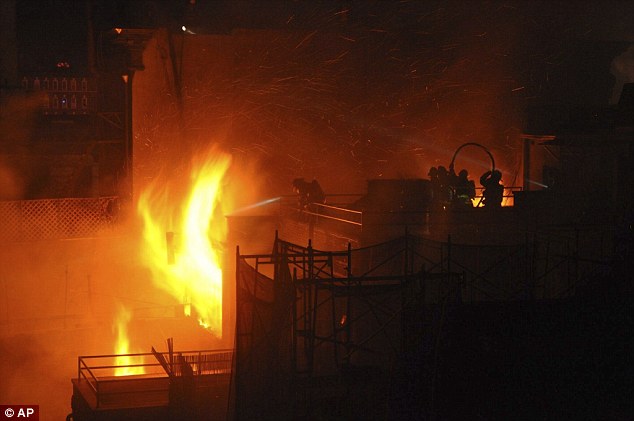 Davidson was the nozzle man who led the charge of firefighters into the cellar as it was engulfed in flames.

Davidson and his men dragged a long hose down a flight of stairs and toward the base of the fire.

But when the firefighters were running low on oxygen, a deputy chief ordered them to retreat.

There was also fear that the intensity of the fire had damaged the structural integrity of the building.

But while his comrades managed to escape, Davidson never made it out of the building.

Sources told the Post that the other firemen simply did not see him as he was left behind in the pitch black darkness.

When the crew realized Davidson was missing, they ran back into the building toward the basement.

There they saw Davidson unconscious and badly injured by burns to his legs.

‘Despite the best efforts of the members of the firefighting forces, EMS, and here at [Harlem Hospital], they were unable to revive Michael and her perished,’ FDNY Commissioner Daniel Nigro said.

‘We were inside when the fire started and everybody came out panicking,’ actress and model Angelica Guillen tweeted after the incident, adding that they ‘were all there and we are safe’ while offering her condolences to Mr Davidson’s family.

Nigro said the blaze erupted in the basement of an unoccupied residential building about 11pm Thursday.

‘They went down the stairs to fight the fire with Davidson as nozzleman,’he said.

‘They encountered heavy fire and they did the best they could. ‘The fire continued to advance. Units were forced to back out of the building. Somehow while backing out of that building, firefighter Davidson was separated from the rest of the unit. 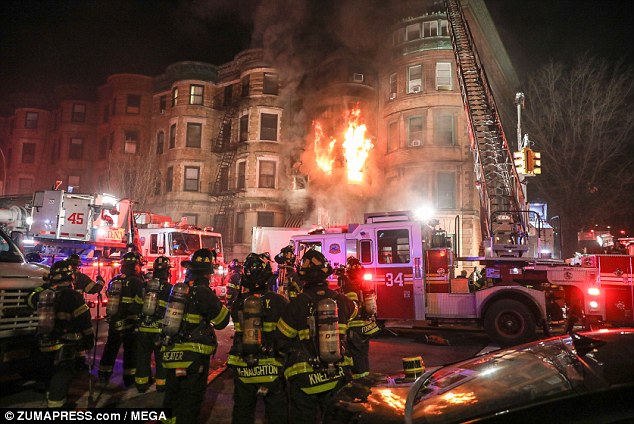 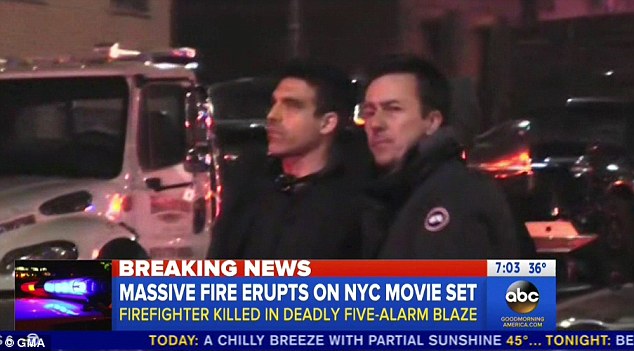 ‘The search ensued. Members tried desperately to find firefighter Davidson and when they did he was unconscious.

‘Our entire city mourns his loss.’

Thanks to the work of more than 175 NYFD firefighters, and dozens of vehicles, the fire was extinguished at around 2.30am on Friday. 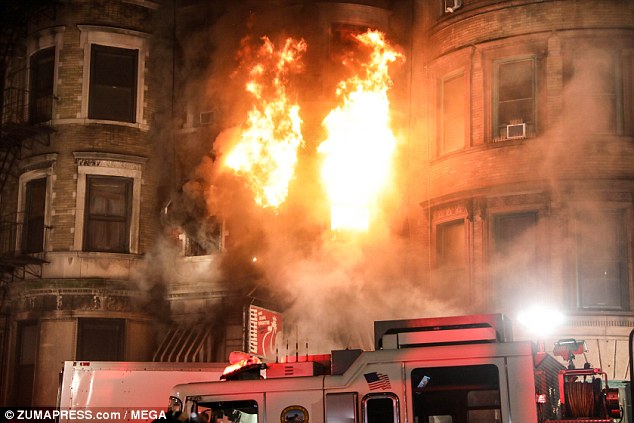 Emergency: The fire reportedly broke out in the basement of the building, which had previously housed a jazz bar and pub, in Harlem 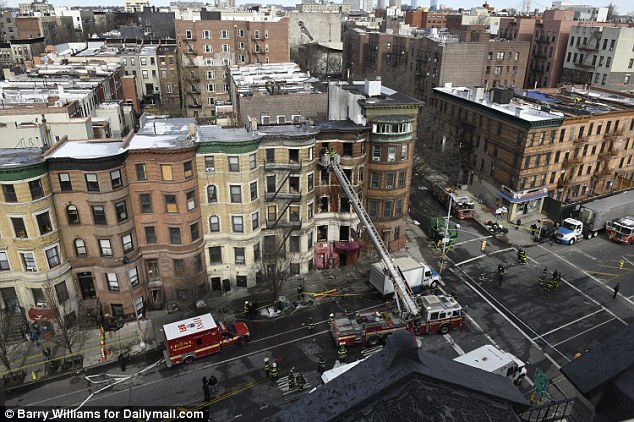 The scene of the blaze today. The building was once home to the famous St Nick’s Jazz Pub, and was being used as a film set for Motherless Brooklyn

Ed Norton, pictured on the set of Motherless Brooklyn, raised the alarm

Nigro said two other firefighters suffered burns and are currently in serious condition, and three civilians were injured, although he did not say if they are part of the film crew.

Mr Phillips was at the hospital when Mr Davidson’s family arrived, and added: ‘You haven’t heard a scream until you’ve heard the scream of a mother who’s seen her son give his life to protect us.’

The fire reportedly broke out in the basement of the building where which formerly housed St. Nick’s Pub, a famous jazz bar that closed down seven years ago.

Neighbours told the New York Daily News that the film crew had turned the street into a 1950s set, using the bar as a ‘jazz club’ around two weeks ago.

‘That actor Ed Norton walked right by. He looked pretty upset,’ Evans said. ‘This is crazy this fire. You think a movie comes up here and it is good for the neighborhood. Not a fire . . . Damn.’ 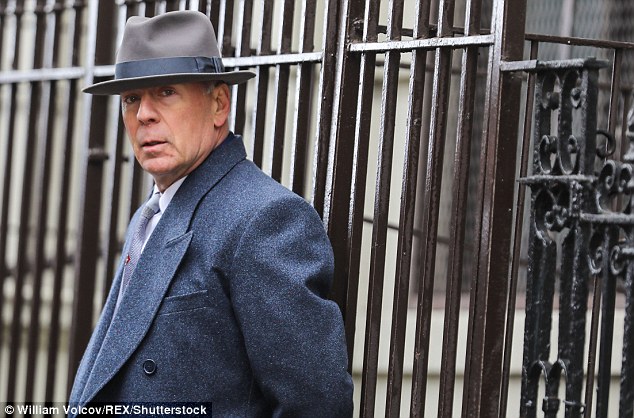 Out of a movie: Bruce Willis is pictured on set of Motherless Brooklyn last month 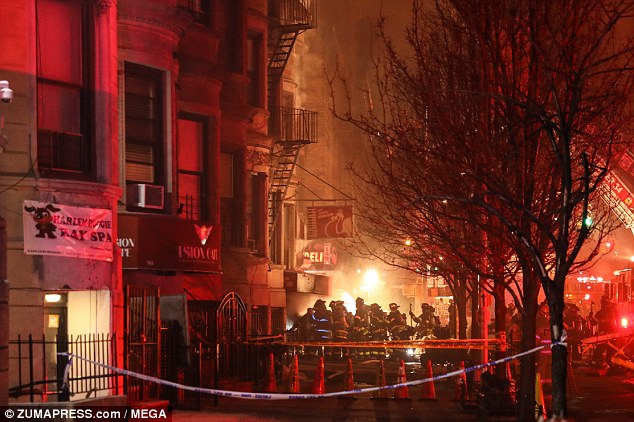 Panic: An actress in the film wrote on Twitter that the crew had been inside filming a scene when the fire broke out 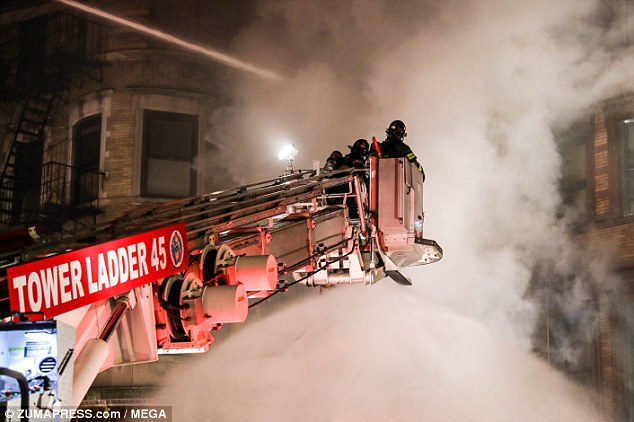 Battling on: Firemen on a tower ladder are seen trying to extinguish the blaze along with their more than 170 colleagues 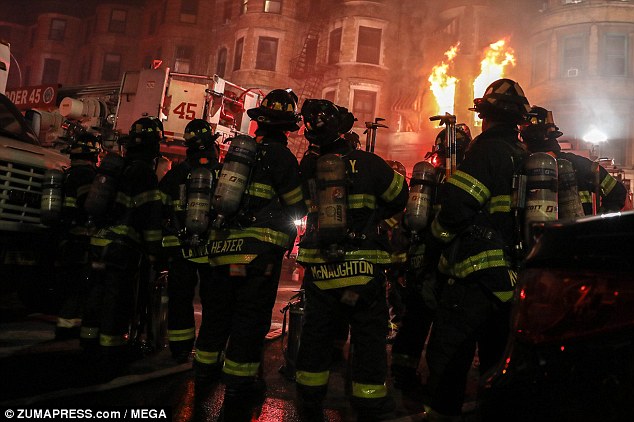 Injuries: The New York Fire Department said two other firefighters suffered burns and are currently in serious condition, and three civilians were injured, although is is not known if they are part of the film crew 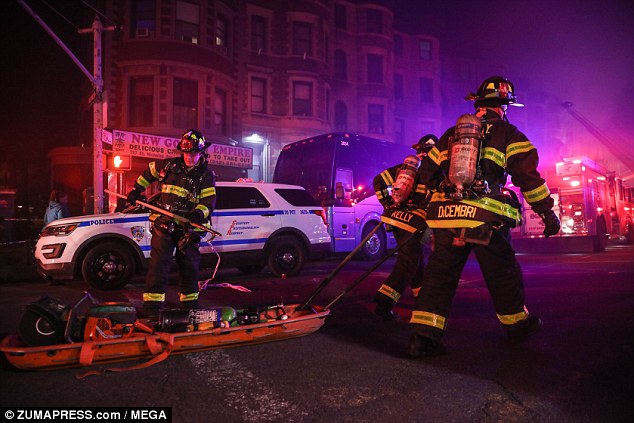 City’s finest: New York firefighters assist at the scene of the blaze which was fought overnight 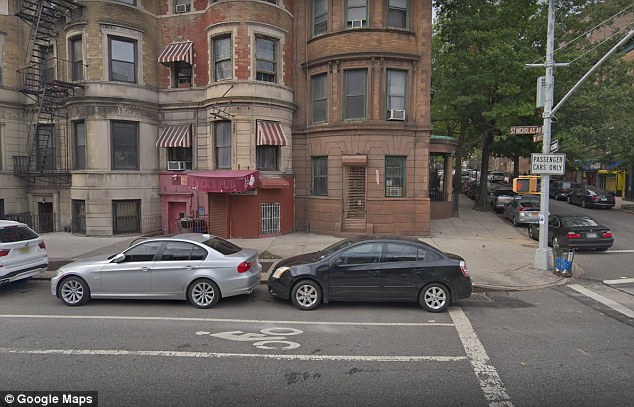 Flames broke out in the basement of 773 St. Nicholas Ave. at about 11 pm

Motherless Brooklyn is a crime drama set in 1950s New York based on a murder mystery novel by Jonathan Lethem.

The cast also includes Gugu Mbatha-Raw, Willem Dafoe and Alec Baldwin, and is due for release next year.

The producers of ‘Motherless Brooklyn’ issued a short statement expressing their ‘deepest condolences’ to Davidson’s family.

‘Our production was towards the end of our working day and had dozens of people working on site, when our crew noticed that smoke was coming into our set and into other parts of the building from below us. As soon as we noticed smoke coming up into our set, our crew immediately alerted the fire department and began alerting residents of the building even as we evacuated our cast and crew’. 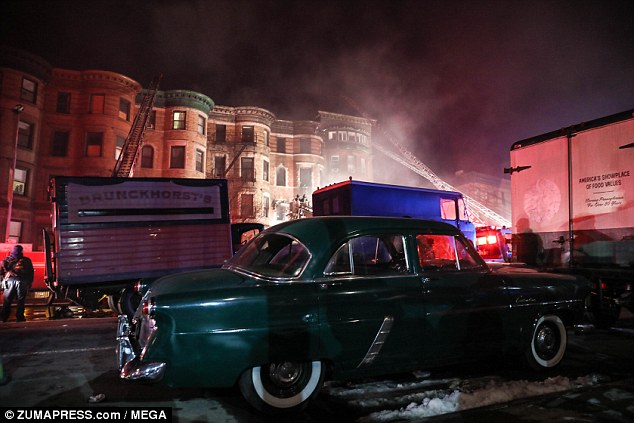 Set: Retro 1950s cars can be seen in the background as firefighters battle the blaze 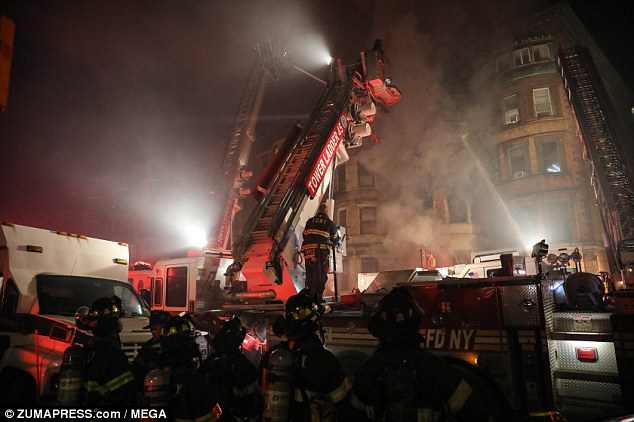 Hard work: The fire broke out around 11pm on Thursday evening, and was extinguished at around 2.30am 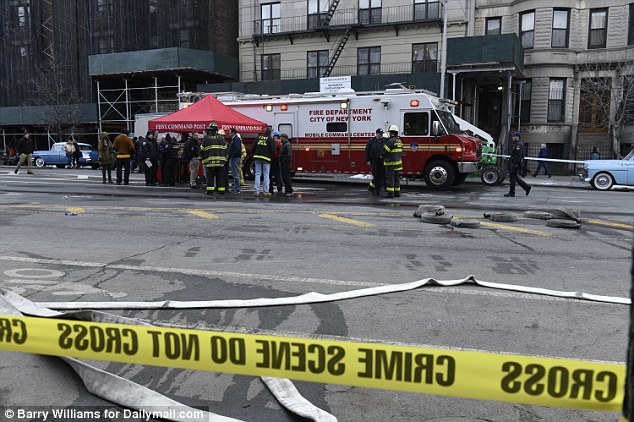 Emergency services at the scene of the blaze on Friday morning 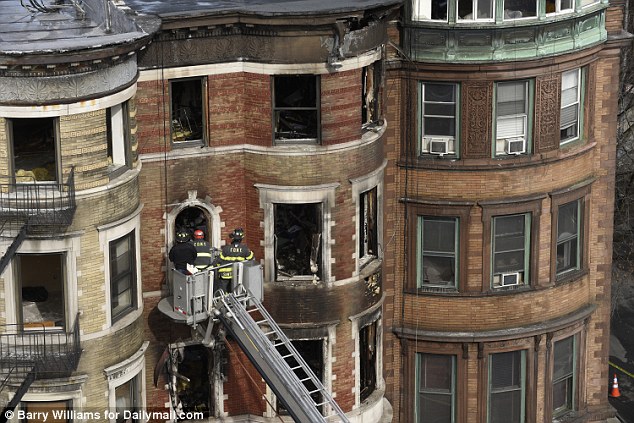 The fire reportedly broke out in the basement of the five-story building, and spread rapidly 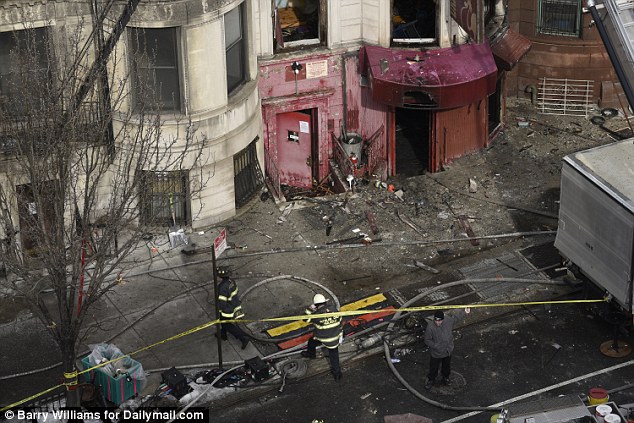 Pictures taken Friday morning show the scale of the devastation 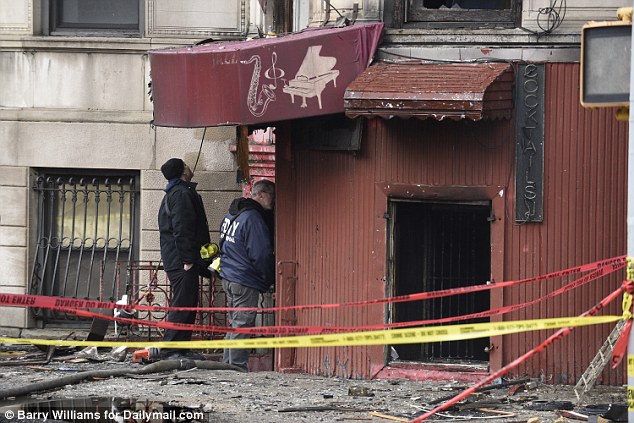 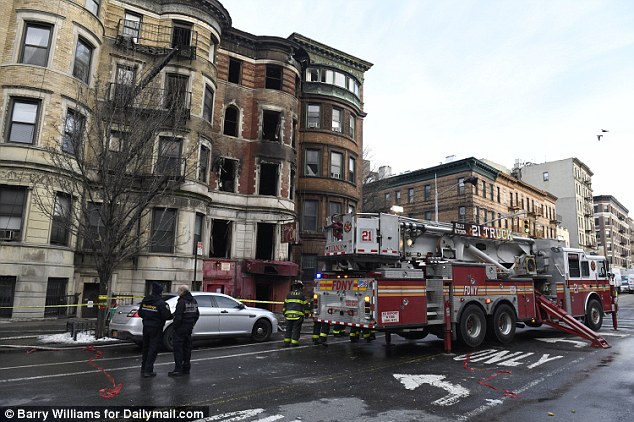 The road was sealed off this morning for further investigation

The building where last night’s tragedy happened was once a popular feature in the Harlem entertainment scene. When it was still open, St. Nick’s Jazz Pub management proudly boasted of being the oldest continuously operating jazz club in Harlem.

It was never significantly altered since 1940, when it was Lucky’s Rendezvous and owned by Duke Ellington’s piano player, Lucky Roberts. Prior to that, in the 30’s it was the Poosepahtuck Club, named after a New York Indian tribe, and featured jazz revolutionary, Joe Jordan as house pianist, and blues vocalist, Monette Moore performing Live jazz seven nights a week.

It was renamed the Pink Angel when it eopened for business in 1950. In the early 60’s it was renamed again to St Nick’s Jazz Pub, a name which stuck til the end, with regular Monday night jam sessions. 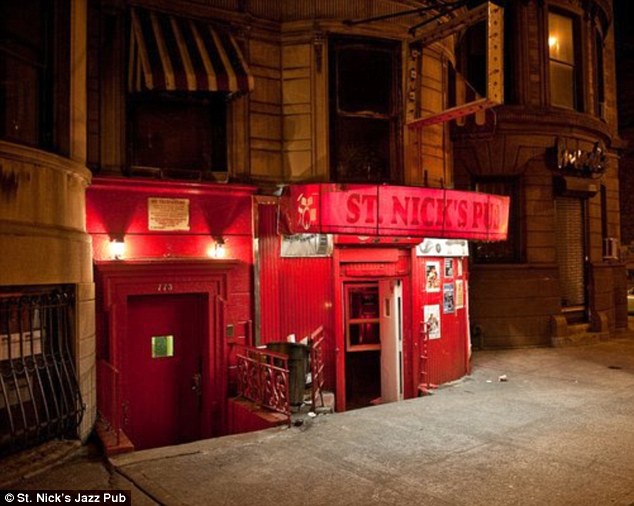 The set was in the 1920s building that once housed St Nick’s Jazz Pub, which closed in 2011