A Pizza Hut manager has been hailed a hero after she saved a baby who was choking on a piece of apple in her restaurant.

Little Ollie Gatenby was eating the piece of fruit when it became lodged in his throat at a branch of the restaurant chain in Teesside Park, Stockton.

The tiny tot was left unable to breathe.

Luckily, trained first-aider Debbie Larry was on hand. The branch manager rushed to the child’s side.

Father Andy Cannon (left) with his son Ollie and Craig Harker (right). The child had a lucky escape after choking on a piece of apple at Pizza Hut

And after about a minute the chunk of apple was dislodged.

Ollie’s family said that minute was ‘the longest of their lives’.

The young boy had been taken to the restaurant on Thursday as a treat with his mother Laura, sister Sophie and uncle Craig Harker.

The group were enjoying a relaxed meal when at 1.30pm disaster struck.

His mother Laura told the Gazette Live: ‘I ran over and started whacking his back.’

‘After probably seconds the waitress came running over and she was hitting his back and trying to get the apple out.’

The family had by this time begun to panic.

It was then that Debbie Larry rushed over to help the waitress and mother – and after another minute she was able to dislodge the fruit. 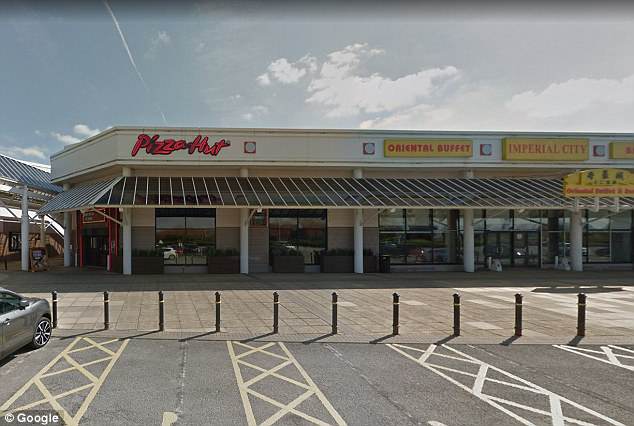 Despite being visible shaken, Ollie walked away unharmed.

His mother said: ‘I didn’t stop crying all day. He had his injections that morning as well and I had been crying at that. It was an awful day.’

The boy’s family praised the restaurant staff for preventing disaster, describing them as ‘fantastic’.

Debbie, from Coulby Newham, has worked for Pizza Hut for 30 years. She admitted she was more scared after the incident, knowing how easy it is for tragedy to strike.