A policeman has been hailed a hero after he jumped out of a 13th floor window in order to catch a suspected paedophile in Kazakhstan.

Bakytzhan Bakirov, 36, and partner Meyir Nesipbay were called to an apartment in Almaty, Kazakhstan’s largest city, to reports that a man had broken in and sexually assaulted a 15-year-old girl.

When the pair arrived, suspect Citizen Sh ran and jumped out of the window – with Bakirov following close behind him.

Bakirov said it only occurred to him later that Sh might have been trying to kill himself rather than be arrested. 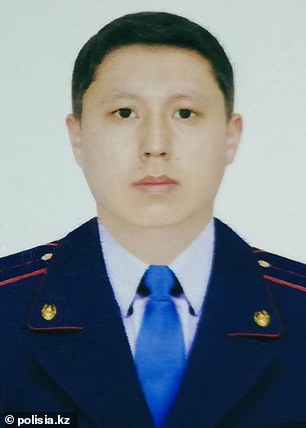 Bakytzhan Bakirov, 36 (left), jumped out of a 13th floor window while chasing a suspected paedophile – after he and partner Meyir Nesipbay (right) were called to investigate

Fortunately for the officer, there was a balcony just two storeys below which he and Sh landed on.

Despite suffering a broken foot, Bakirov managed to hold on to Sh until backup arrived, and has now been honoured with a bravery medal.

Sh is also accused of stealing £13,000 from the girl’s house and ‘terrorising’ her four-year-old brother.

‘There was only one thought in my head – to catch him and I didn’t think about anything else,’ said Bakirov.

‘I jumped out before realising it, but there was no fear. I had no idea there was a terrace two floors below….

‘You don’t think about anything – the main thing is to catch the criminal, so I jumped after him. 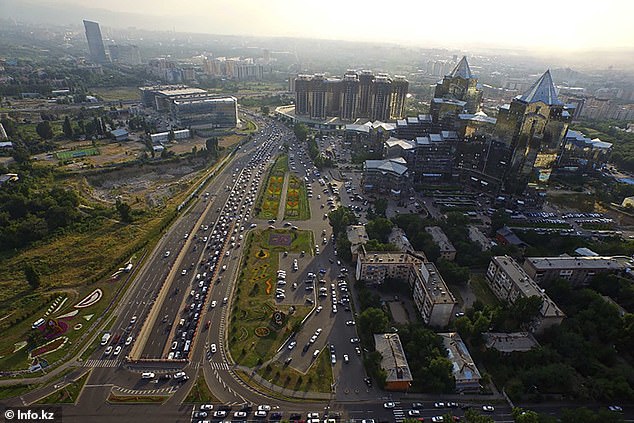 Fortunately for Bakirov there was a balcony two storeys below the apartment, which he landed on along with the suspect (pictured, the city of Almaty, where the incident took place)

‘What if the suspect wanted to commit suicide in order not to go to jail? And I, without hesitation, jumped after him.

‘Yes, our work is fraught with great risks every day… but such moments are very sobering.’

He and colleague Meyir Nesipbay had been sent to a 13th floor flat where it was known the suspected child sex attacker was hiding.

The suspect ran through the flat and jumped from an open window.

Bakirov – who has two daughters and six sons – said it was the thought of protecting the children that motivated him.

After three operations on this foot ‘doctors told me I will still be able to chase criminals’.

He was awarded a bravery medal by police chiefs, as was his colleague who rushed to his aid.