Mr Ellwood was first on the scene to help the officer after he was stabbed during the Westminster terror attack in March 2017, but was unable to save him.

The MP told of his devastation at his death, and revealed how difficult it was to hand over the rescue effort to paramedics.

A visibly emotional Susanna said: ‘You had to be told to step away because you would not let go of the possibility of rescuing him. That moment, must have been incredibly difficult?’

Mr Ellwood replied: ‘It was, it was extremely difficult, It went very quiet after that… other attacks had happened so they [the paramedics] left and a few of us were left with PC Keith Palmer.

‘We felt we’d failed and again another message is there is training, anyone we can all do it. I would hate for anyone to be in a position to say, ‘Why didn’t I know a bit more about first aid?”

The MP, who served in the Royal Green Jackets, went on to claim Britons had become too ‘risk averse’ and overly reliant on emergency responders in the wake of incidents, including terror attacks.

The inquest into the deaths of PC Palmer and four other victims yesterday heard that many onlookers filmed casualties on their phones rather than doing anything to help.

‘I know it’s controversial but there will always be good people who will step forward. They will want to get involved and challenge what is going on,’ he said.

‘We’ve become too risk averse, we’re giving space for antisocial behaviour to take place if it goes unchallenged and for violence to take place.

‘Who are the first responders? It’s not the police we call them that but it’s the public.’ 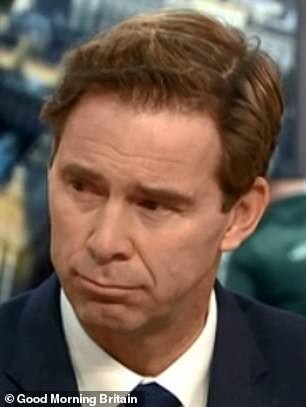 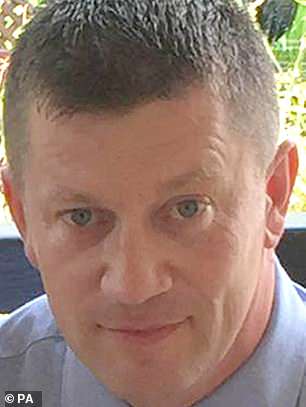 Mr Ellwood (left) was first on the scene to help the officer after he was stabbed during the Westminster terror attack in March 2017, but was unable to save PC Palmer (right)

The inquest into the death of PC Palmer and four civilians is due to conclude today at the Old Bailey.

On Tuesday the court heard closing submissions, with Jonathan Hough QC, for the coroner, saying the inquests should conclude all five victims were unlawfully killed.

On GMB, Mr Ellwood also reacted to Theresa May’s conference dance moves, saying it is difficult to show your personality in politics.

He said of her ABBA-themed entrance: ‘Politics is a difficult game. You’re going to get criticised whatever you do.

‘One of the difficult things in politics is to actually allow your personality to come across, let who you are shine.

‘She’s [Theresa May] actually a wonderful person individually as well as taking one of the toughest jobs that there is.’

Of Brexit and the chance of a no deal, he said: ‘I’m sure that we will actually get a deal. We then must move forward. Britain is so strong in so many areas.’

He said: ‘Each was murdered in a terrorist atrocity which was no less brutal for its lack of sophistication.’

He then stormed through gates near the Houses of Parliament and fatally stabbed Pc Palmer with two knives.

In his closing argument, Gareth Patterson QC, for families of victims on the bridge, urged the coroner to make a report on the circumstances of the case to ‘protect the public’.

On the role of MI5, whose knowledge of Masood has been heavily scrutinised, he said: ‘We do think there is room for improvement in terms of decision-making.’

He suggested security services should look again at when to investigate suspects and when to stop, and to take account of violent backgrounds.

Mr Patterson also called for the Government to ‘try again’ with tightening rules for hiring cars.

Dominic Adamson, representing Pc Palmer’s widow Michelle, said that there was ‘a systematic failure’ in protecting unarmed officers on guard at the Palace of Westminster. 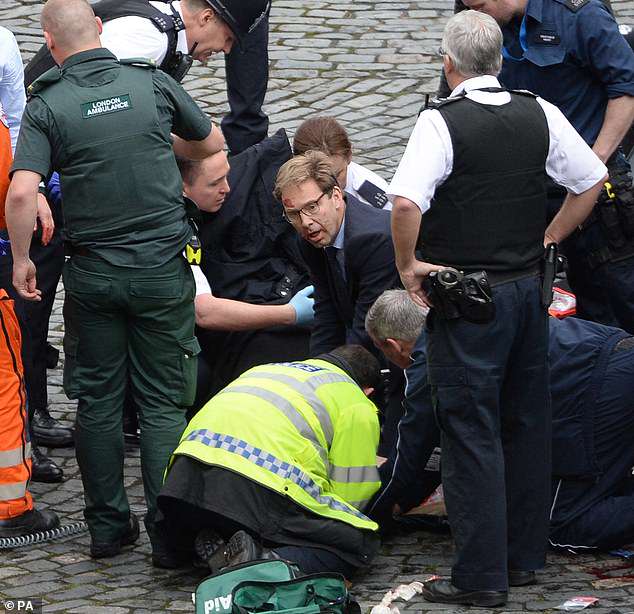 Mr Adamson told the coroner: ‘In my submission it is very clear that you can be satisfied that as a result of those failures the consequences for Pc Palmer were that there was a substantial loss of the opportunities for him to be saved.’

No firearms officer had been near Carriage Gates, where Pc Palmer was on duty, for nearly an hour before Masood’s attack.

Susannah Stevens, representing the officer’s family, said: ‘If there had been authorised firearms officers present at that time, in our submission, on the balance of probabilities they would have been able to prevent a loss of an opportunity of saving Pc Palmer’s life.

‘Or to put it another way, on the balance of probabilities, their absence contributed to Pc Palmer’s death.’

The court will hear further closing submissions today, before the coroner begins giving his conclusions.