Advertising boss Vicky Jacobs was whip-smart and terrific fun, the sort of woman people couldn’t say no to.

So it’s no surprise that, in the last three months of her life, friends and colleagues found themselves helping her to create a multimedia campaign to raise awareness of the disease that was to take her life — ovarian cancer.

Now featuring on TV, billboards and in magazines, I Will Survive is the biggest campaign charity, Ovarian Cancer Action, has run in its ten-year history.

It’s all thanks to Vicky, 48, who master-minded the campaign in a few weeks. It has a cast of young girls, ‘representing’ the next generation of ovarian cancer patients, who speak the lyrics of Gloria Gaynor anthem, I Will Survive.

Hollywood star Kate Winslet, whose mother Sally died of the disease in 2017, voices the stark message: ‘One woman dies of ovarian cancer in the UK every two hours. The next generation deserves better. Make a pledge for a girl you love.’

It was screened for the first time on October 29 — the day that Vicky died.

‘I couldn’t be more proud of her,’ says her husband, commercial film producer Alex Heathcote 49, of North-West London. ‘What she wanted more than anything in her last months was to do exactly what the film says: ensure the next generation survives this disease.

‘She wanted her legacy to be improving diagnosis and treatment so young girls don’t suffer.’

Nearly nine in ten women in England and Wales diagnosed with breast cancer now survive for five years or more. For ovarian cancer, it’s less than half.

However, an Ovarian Cancer Action spokesman says: ‘More than two-thirds of ovarian cancer patients are diagnosed with advanced ovarian cancer. 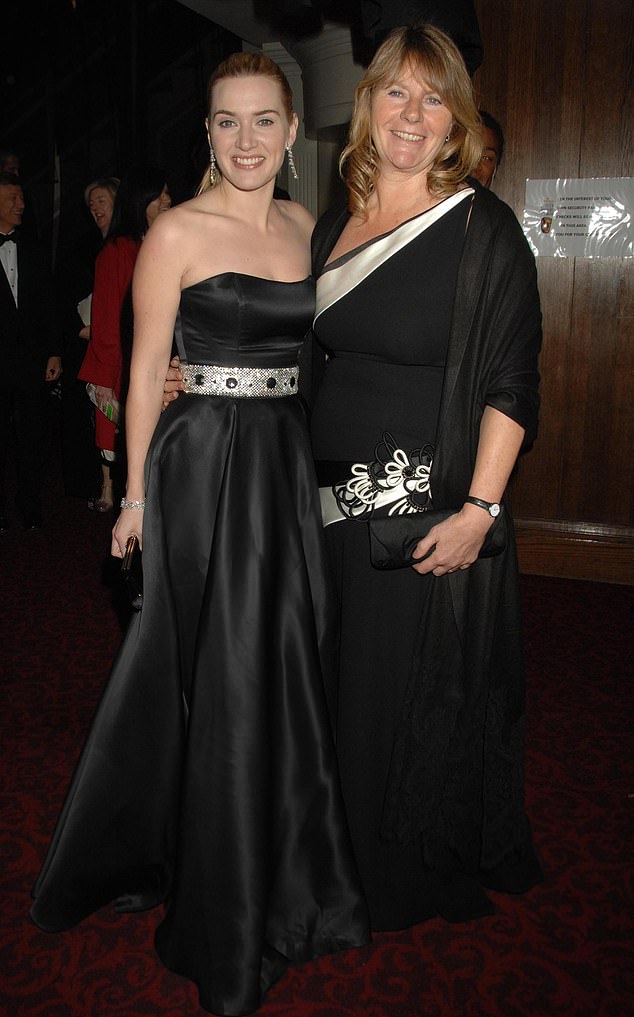 Hollywood star Kate Winslet, whose mother Sally died of the disease in 2017 (pictured together), voices the stark message: ‘One woman dies of ovarian cancer in the UK every two hours

Determined to change this, Vicky pulled in favours and the film was made in record time, says Alex. ‘I was able to show her the final version before she died.’

Vicky’s diagnosis, in May 2014, was a bolt from the blue. Under 50, she had none of the risk factors — not being overweight or diabetic and there was no family history. It came as the pair tried for a baby.

‘Up until then our lives had been blessed. We met in a bar in Soho in 1998 and I was blown away,’ recalls Alex, who works for Hollywood director Ridley Scott.

‘It wasn’t just that Vicky was brilliant — she had a first-class degree in modern languages from Cambridge University — she was also fearless and graceful.

‘Realising we needed help, we embarked on IVF in July 2013 — paying to have it privately.’

A routine scan showed cysts on Vicky’s ovaries and doctors sent her to St Mary’s Hospital in Paddington, London. The surgeon recommended removing her ovaries, dashing hopes of children.

Shortly after the operation, in April 2014, shattering news came: the pathology report showed cancer in one of Vicky’s ovaries.

Doctors recommended a hysterectomy and appendectomy, as a precaution, throwing Vicky into instant menopause.

Alex recalls: ‘Not being able to have a family was a blow. But that was nothing compared with being told Vicky had ovarian cancer.’

A gruelling operation followed, but the surgeon reassured them it had a very high success rate. Ovarian cancer is commonly treated with both surgery and chemotherapy, but in 26 per cent of cases it is with surgery alone.

The couple took a trip to Brazil after the operation. But tissue samples showed cancerous cells in Vicky’s diaphragm.

Vicky needed chemotherapy which she received under the care of Hani Gabra, a professor of medical oncology at Imperial College London. ‘He was amazing,’ Alex says. ‘He assured us that he would treat Vicky as if she were his own sister. And he did.’

The powerful drugs left Vicky weak and nauseous, and she was forced to take extended leave from her job as a managing director.

But the drugs only granted her six weeks of remission; a scan, in March 2015, revealed cancerous cells in her pelvis.

‘Vicky knew this meant the cancer was incurable but didn’t flinch,’ says Alex. ‘As Hani was about to elaborate, Vicky said: ‘Hani, I understand the implications but I will not be defined by this disease.’

‘And she wasn’t. If one good thing comes from such a diagnosis it’s that life gets distilled into its purest form and Vicky intended to squeeze every last drop out of it.’

The pair took long holidays. In between trips, Vicky embarked on chemotherapy. Further surgery, in August 2015, removed more tissue from her pelvic area.

But, by April 2016, scans showed cancerous cells in her bones, lymph nodes, hip and neck. Weak and in terrible pain, palliative radiotherapy was recommended.

In a desperate last bid, Professor Gabra mentioned a clinic in Lausanne, Switzerland, was having good results with experimental immunotherapy combining Kadcyla and Keytruda drugs which kick-start the body’s immune system to fight cancer cells.

The couple used their savings to help fund it. Vicky was put on a programme of six treatments, three weeks apart, costing £10,000 each. It was the first time these drugs had been combined to treat ovarian cancer.

The results were staggering at first. Within three months, Vicky was feeling much better and scans and blood tests showed the tumours had stopped growing.

‘It was like having Vicky back to normal,’ says Alex. ‘The pain disappeared. It seemed the drugs had turned on her immune system, which was now successfully fighting the cancer cells.’

For the next year they celebrated every birthday and wedding anniversary as if it were their last.

‘We were never given false hope. We were acutely aware that — however miraculous it seemed — the remission was only ever temporary,’ says Alex.

And so it proved. In April 2018, 18 months after starting the pioneering treatment, Vicky’s cancer began growing again.

With time running out, Vicky decided to throw her talent and energy into changing survival odds for the next generation and contacted Cary Wakefield, Ovarian Cancer Action chief executive.

‘Vicky was a force of nature,’ Cary says. ‘She knew it was too late for her, but understood that funding research would improve survival for women in the future. Vicky wanted to leave a legacy that would ensure ovarian cancer would no longer be overlooked.’

Despite being extremely ill, Vicky insisted on going to the shoot in August, returning home exhausted but exhilarated.

Weeks later, Vicky was admitted to St John’s Hospice, North-West London, where just a week before she died, Alex showed her the final version of ‘her’ film.

‘Her face lit up,’ says Alex. ‘She was enormously proud.’

At Vicky’s funeral, a friend read out her farewell letter.

‘I have been lucky enough to have had the most incredible life, surrounded by awesome people,’ she wrote.

‘I really struggle with not seeing my niece, nephew and godchildren grow up. I have no children to mourn — but a husband who I wanted much more time with. But I know I’m just being greedy.

‘If my life has been cut shorter than I’d like it, it’s worth remembering that sometimes it’s worth under-staying your welcome.

‘So don’t be sad for me today, because I’m headed straight to the dance floor in the sky, to bust some moves with some dear mates gone ahead too soon.’

Alex, meanwhile, is burying his grief in raising funds for Ovarian Cancer Action, with £27,000 of his £75,000 target already reached.

‘Vicky would have been so pleased. People’s generosity is mind-blowing.’