Hezbollah has stores of weapons across Europe including the explosive chemical that blew up Beirut, the US government claimed last night.

Hezbollah operatives have moved ammonium nitrate through Belgium, France, Greece, Italy, Spain and Switzerland since 2012, the State Department said as it ramped up the pressure on Europe to ban the Iran-backed group.

The fertiliser can be used to make explosives and can be highly dangerous in storage – as demonstrated by the Beirut blast which killed nearly 200 people and devastated huge swathes of the city last month.

The disaster in Beirut on August 4, when a stash of ammonium nitrate exploded and devastated huge swathes of the Lebanese capital

The US government issued the warning on Thursday night as it appealed to Europe to ban the organisation, which has long been under US sanctions.

Washington differs with the EU by regarding all of Hezbollah as a terrorist organisation, while Brussels distinguishes between its political and military wings.

‘Why would Hezbollah stockpile ammonium nitrate on European soil?’ Sales said. ‘The answer is clear: Hezbollah put these weapons in place so it could conduct major terrorist attacks whenever it or its masters in Tehran deemed necessary.’

Hezbollah’s stores of ammonium nitrate are believed to be still in place around Europe, possibly in Greece, Italy and Spain, the US government says.

The elected arm of Hezbollah has been part of Lebanese governments in recent years which were widely blamed for the August 4 disaster.

Some individual countries including Britain and Germany have outlawed the group in its entirety.

But France, the former colonial power in Lebanon which is leading reconstruction efforts in Beirut, says Hezbollah’s political arm has a legitimate role.

That has led to pressure from the US, which warns that Hezbollah’s weapons stores could undermine Emmanuel Macron’s efforts at reform.

Hezbollah is a ‘unitary organization that cannot be subdivided into a military and so-called political wing,’ Sales said.

‘The European approach to Hezbollah since 2013 has not worked,’ he said.

‘It is fiction that terrorist activities can be cordoned off from the other activities of Hezbollah.’ 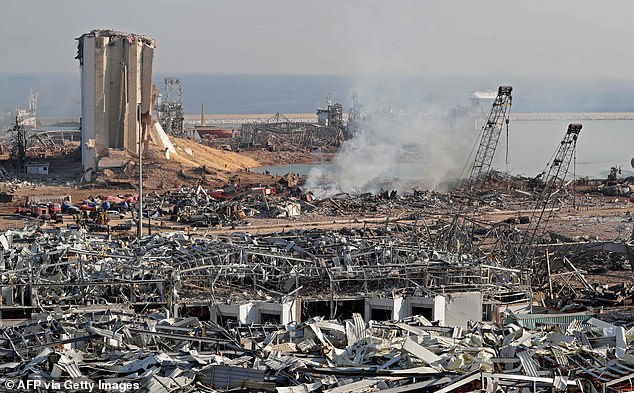 Without a full ban, the group can still raise money and recruit operatives, he added. ‘Hezbollah is one organization,’ he said. ‘It is a terrorist organization.’

Sales made the remarks in an online forum hosted by the American Jewish Committee, which has called upon more countries to ban Hezbollah.

The Shi’ite militant group is backed by Iran, which is being targeted by US sanctions after Donald Trump pulled out of the 2015 nuclear deal two years ago.

Lebanon’s political leaders yesterday missed a French deadline to form an emergency government after the blast which disfigured Beirut.

Macron had imposed a two-week deadline to agree on a line-up of experts to tackle the country’s crises, but it expired on Wednesday with no result.

The explosion led to an outpouring of anger at a ruling elite widely seen as corrupt and incompetent, prompting the government to resign.

France and other international powers have refused to provide desperately-needed aid until serious reforms are made.

The two main Shi’ite groups in Lebanon’s usual power-sharing arrangement have insisted on retaining the finance ministry, frustrating efforts at an agreement.

‘I am fully aware that we do not have the luxury of time,’ prime minister-designate Mustapha Abib said in a brief statement after meeting President Michel Aoun.

The French president’s office said it regretted the failure to form a government, but said it was not too late to do so.