Mina Starsiak Hawk has opened up about her six-month weight loss journey while calling out an online troll who tried to credit her transformation to having plastic surgery.

The HGTV star, 36, took to Instagram Stories on Thursday to post before-and-after swimsuit photos of herself that were taken in July and October of last year, saying she has been prioritizing her physical health.

Starsiak Hawk, 36, took to Instagram Stories on Thursday to post before-and-after swimsuit photos of herself that were taken in July and October of last year 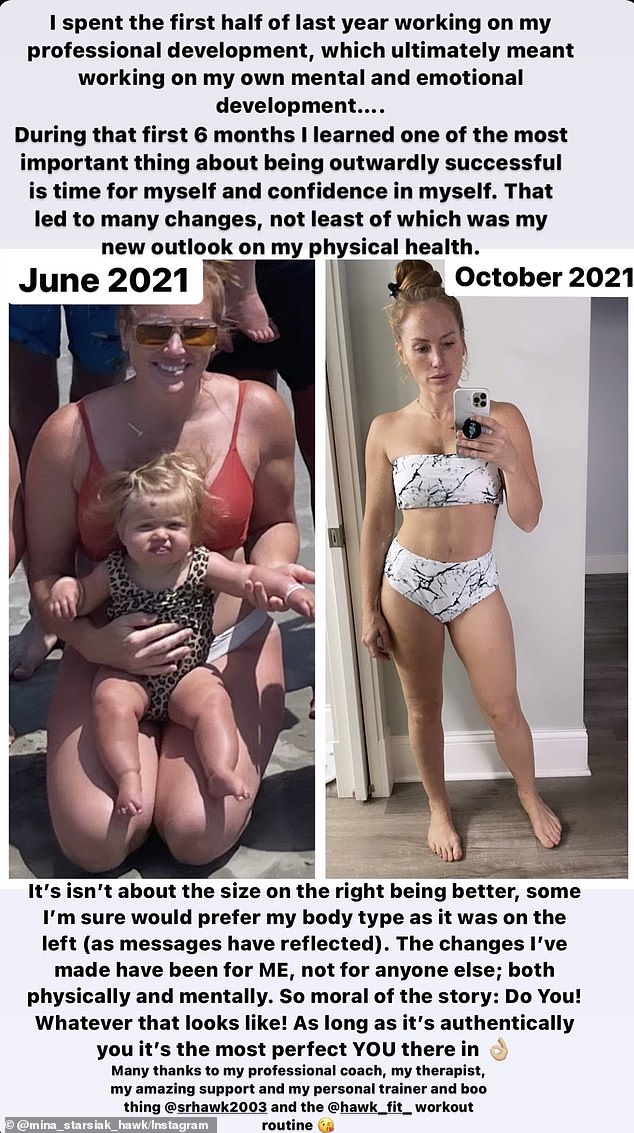 ‘During that first 6 months I learned one of the most important thing[s] about being outwardly successful is time for myself and confidence in myself,’ she continued. ‘That led to many changes, not least of which was my new outlook on my physical health.’

Starsiak Hawk insisted that her post ‘isn’t about the size on the right being better,’ saying she has received messages from people who prefer how her body looks in the ‘before’ photo on the left.

‘The changes I’ve made have been for ME, not for anyone else; both physical and mentally,’ she added. ‘So moral of the story: Do you! Whatever that looks like! As long as it’s authentically you it’s the most perfect YOU there is.

The Good Bones star concluded her post by thanking her professional coach, her therapist, and personal trainer, who happens to be her husband, Steve Hawk. 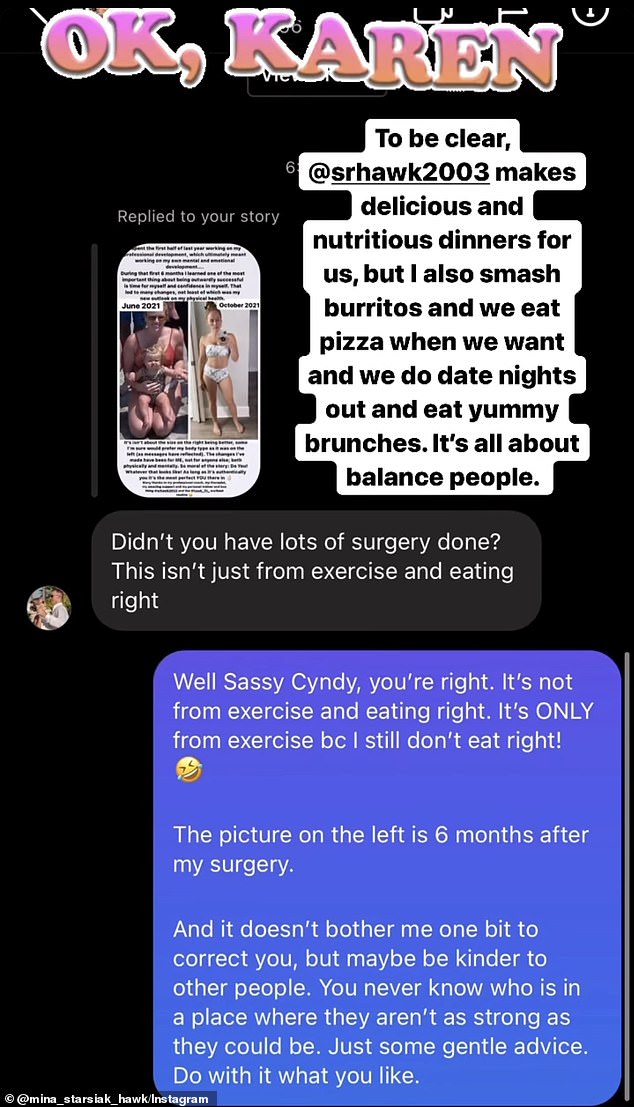 ‘Didn’t you have lots of surgery done?” the unnamed user asked. ‘This isn’t just from exercise and eating right.’

Starsiak Hawk got a tummy tuck, liposuction, and breast implants while undergoing a ‘mommy makeover’ in December 2020, but she pointed out that her ‘before’ photo was taken after she had surgery. 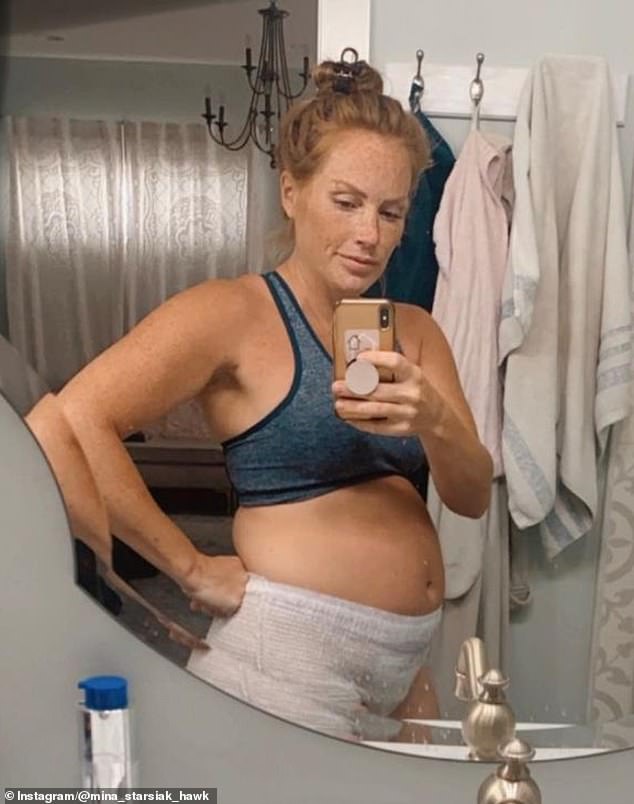 Starsiak Hawk (pictured a month before surgery) got a tummy tuck, liposuction, and breast implants in December 2020 following the birth of her daughter that year 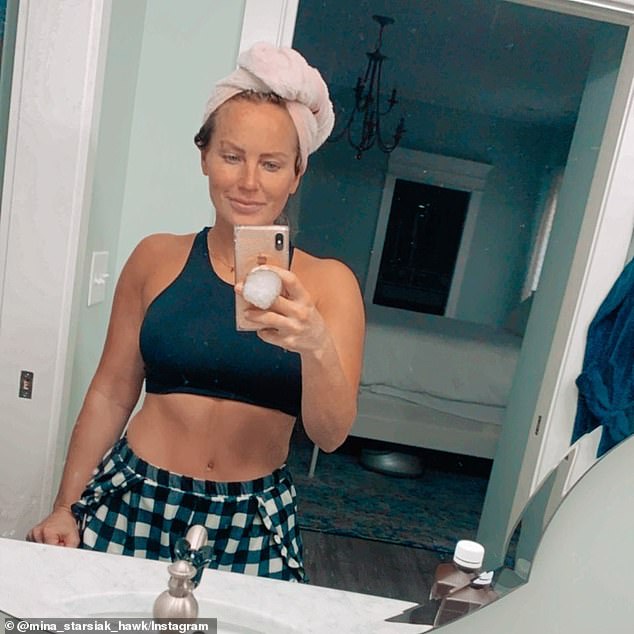 ‘And it doesn’t bother me one bit to correct you, but maybe be kinder to other people. You never know who is in a place where they aren’t as strong as they could be. Just some gentle advice. Do with it what you like.’

Starsiak Hawk also wrote on the post that her husband ‘makes delicious and nutritious dinners for us, but I also smash burritos and we eat pizza when we want and we do date nights out and eat yummy brunches.’

‘It’s all about balance people,’ she added.

The home rehabber also posted a photo of herself in a sports bra and leggings that shows the rolls on her stomach when she sits down. 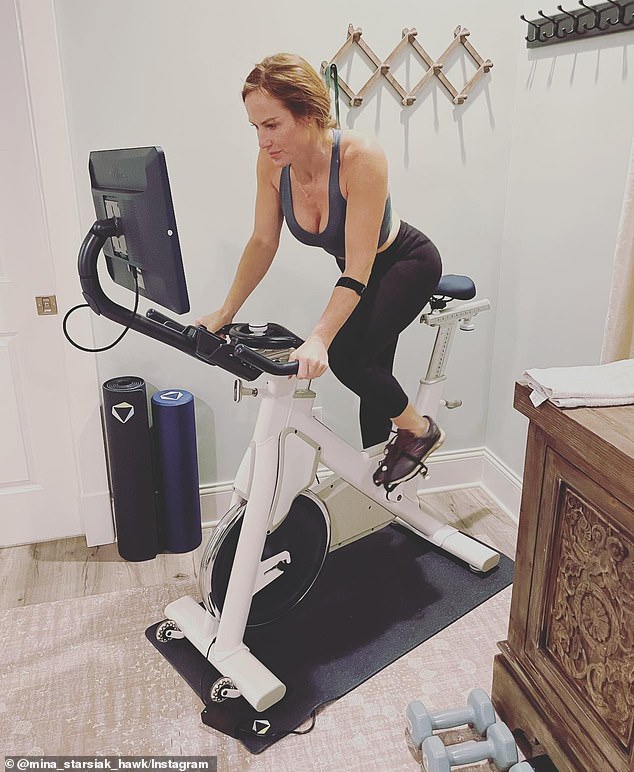 The mother of two credited her success to working out with her personal trainer husband, Steve Hawk 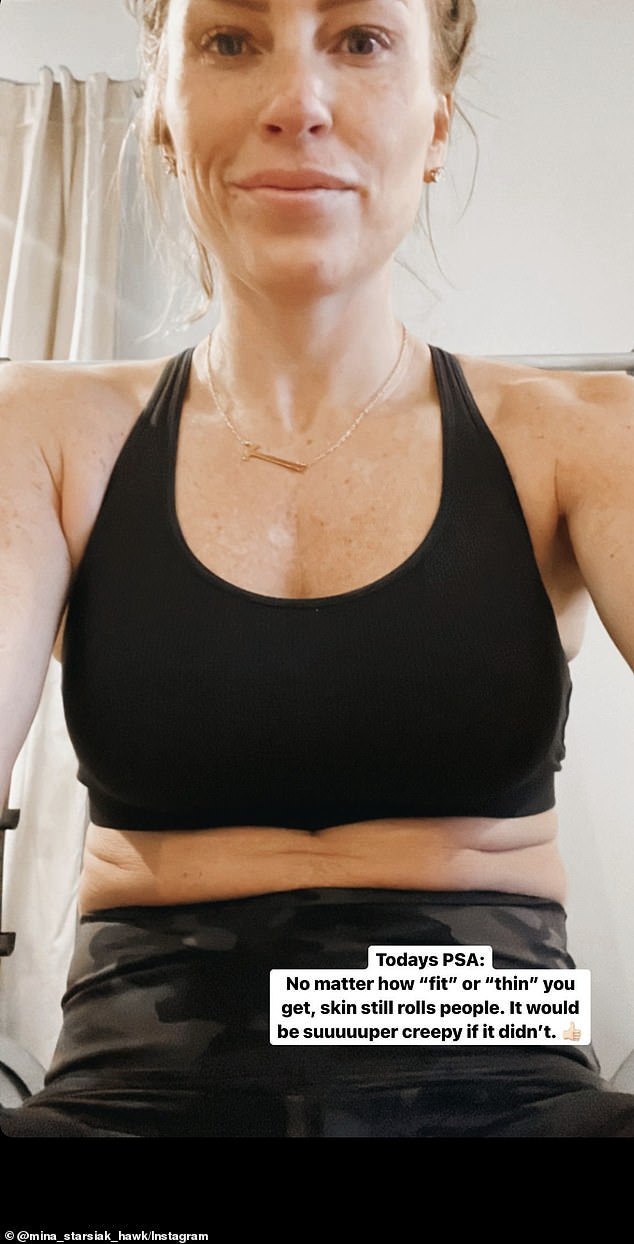 On Thursday, Starsiak Hawk also shared a photo of her stomach when she was sitting down, saying: ‘No matter how “fit” or “thin” you get, skin still rolls people’

‘Today PSA: No matter how “fit” or “thin” you get, skin still rolls people,’ she wrote. ‘It would be suuuuuper creepy if it didn’t.’

Starsiak Hawk, who is mom to Jack, three, and Charlie, one, opened up about her decision to have get a tummy tuck, liposuction, and breast implants in an interview with People last year.

The mother of two also wanted to correct the four-and-a-half-inch separation in her abs that was the result of diastasis recti, a common pregnancy condition in which the large abdominal muscles separate.

‘I do a very physical job and I like working out, and your core is so attached to everything, every movement I do, like swinging a hammer,’ she said. ‘And I just didn’t feel like I was going to be able to work out and get this back to where I felt strong, like myself, like I did before kids.’