HGV driver, 35, and instructor spot blazing car during lesson then leap from cab, smash window and haul out 75-year-old trapped motorist… while others stand and film on mobiles

Driver Martin Hancill leapt from his vehicle in the middle of a lesson to save a man’s life by rescuing him from the burning wreckage of an upturned car.

Mr Hancill was just minutes into his lesson when he and his instructor spotted the blazing Peugeot hatchback on its roof at the side of the road.

The 35-year-old, who was taking an HGV refresher lesson, immediately pulled over and was horrified to see an elderly man trapped inside while others were trying in vain to put out the fire with an extinguisher.

He then smashed one of the car’s side windows with a wheel wrench from the lorry’s cab and worked with driving instructor Tim Brennan to haul the 75-year-old man out of the vehicle.

Mr Hancill, who has been described as a hero, said he was shocked to see that others were stood around filming the blaze rather than helping.

The father of two modestly said: ‘I wouldn’t say I was a hero, it just had to be done. 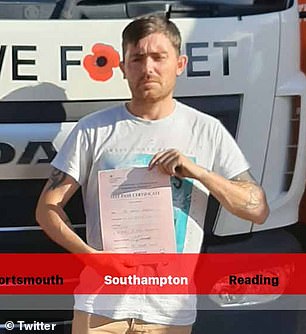 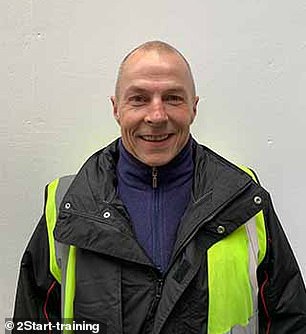 Martin Hancill, left, leapt from HGV with instructor Tim Brennan, right, as the pair worked together to smash window behind the driver so they could adjust the seat and reach the man

‘If I was in that situation I would hope that somebody would do the same for me.’

He claims it was fate that they arrived at the scene on the A3057 near Romsey, Hants, just five minutes into the lesson as he and Mr Brennan had originally planned to take another route.

They then saw a car flashing it’s lights as they approached.

Mr Hancill, who works for Travis Perkins, added: ‘We got there and people were stood there with a fire extinguisher, instead of trying to get the guy out of the car.

‘I smashed the window behind the driver’s seat with a wheel brace so Tim, my instructor, could lower the seat.

‘Tim and another man who was helping managed to get the guy out of the door before the car went up in flames.

‘We carried him away from the car, just in case it exploded, and made sure he was alright.

‘He was in so much pain, so I just kept talking to him.’

Mr Hancill, who completed a first aid course with St John Ambulance earlier this year, then treated cuts on the man’s face while they waited for emergency services to arrive. 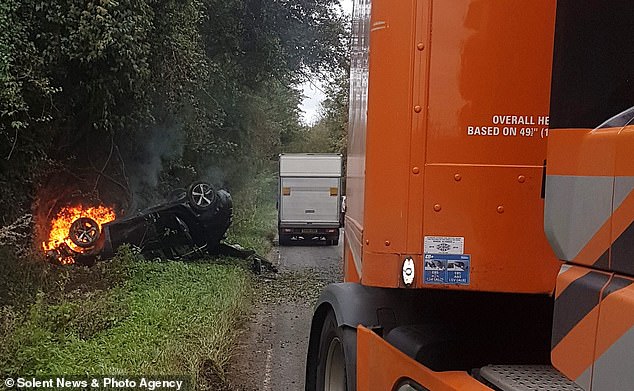 He added: ‘If I didn’t have a qualification, I wouldn’t have known what to do..’

Mr Hancill, who lives in Wimborne, Dorset, and served in the Royal Regiment of Fusiliers for 11 years, said they hadn’t originally intended to drive that route, saying: ‘We came to a roundabout, and we were going to go left.

‘But for some reason, it was like Tim had an intuition. He said ‘no, let’s go right’ for no reason. It had to be fate.’

The driving school he is learning with described him and 55-year-old Mr Brennan as ‘true heroes’.

‘Their quick actions undoubtedly saved a life while putting their own at risk.

‘Thankfully Martin is first aid trained and was able to assist the casualty before the emergency services arrived, coupled with the quick thinking of Tim to place our vehicle as a roadblock to avoid any further damage to passing traffic.

‘We have been in contact with the driver’s family and have sent our best wishes for a speedy recovery.’

Mr Hancill added that though the elderly man, called Tony, suffered broken bones, he is ‘apparently going to make a full recovery’.