Hi-de-Hi! star Linda Regan talks to ME AND MY MONEY

Actress Linda Regan says the biggest money mistake she ever made was investing in sex shops in the 1980s.

Best known for her role as Yellowcoat April in the British holiday camp sitcom Hi-de-Hi!, she used to make up to £20,000 a day starring in TV commercials.

Now she earns a crust as a highly successful crime novelist – a career that stemmed from being kidnapped at knifepoint 15 years ago, prompting her to put the experience down on paper.

She spoke to DONNA FERGUSON from her home in Kent where she lives with husband and actor Brian Murphy. Her latest book The Terror Within is out now.

To work hard for it. My father was a struggling comic and comedy magician when I was a child. He eventually became a variety agent. He was a huge source of inspiration.

My mother was a nurse. I was born in a tiny place in Brixton, South London, and my parents were pretty penniless when I was young. There were times they struggled to pay for food. I remember my mother cutting the end of my shoes off so my toes could grow out because they couldn’t afford a new pair.

But then Dad started to do well and he invested his money in property. We became really well off as I grew up. I ended up going to a private school and having dance and horse-riding lessons – stuff like that. But I don’t think I ever forgot where I came from.

What was the first paid work you ever did?

Handing puppets to my dad when I was four. He used to do a Punch and Judy act at the seaside, so my job was to pass him the puppets. I also used to tie the balloons when he did balloon modelling because I had tiny fingers. I got paid in donkey rides and ice cream.

Yes, when I purchased my first house in the 1980s while in my 20s. I bought a bungalow in Bromley, Kent. It was scary because as an actor you don’t know where your next job is coming from.

But about a year after I bought it, I got my job on Hi-de-Hi! After that, my life changed. Because I was on TV, I got paid well to do pantomimes and personal appearances. Suddenly I wasn’t struggling any more.

I don’t remember exactly how much I got paid per episode of Hide-Hi! But I remember it used to go up every year as my character became more popular – and I’d get paid for the repeats of the previous year’s episodes as well. So I did well and buying that bungalow turned out to be the best financial decision I ever made. It meant I never wasted my money on rent.

Yes, for TV commercials. In the 1980s, you got paid for repeats of any advert, so you could earn absolutely ridiculous amounts of money for a day of filming. I did loads, including one for Woolwich Building Society. Somebody sawed me in half and asked me if I was in the Magic Circle. I answered: ‘No, I’m with the Woolwich.’ I must have earned about £20,000 from that.

Some £800 worth of junk jewellery from Topshop. I was a teenager and had just got a cheque for a commercial I’d done, ironically for a diamond company. I went out that day and bought all this worthless jewellery. My mother nearly killed me.

Oh goodness, that was the fault of actress Liz Fraser. She was wacky and mad and sadly she died in 2018 – I miss her terribly. She always invested in stocks and shares, and shortly after I bought my bungalow she had this wonderful idea that we should invest £5,000 each in sex shops.

Of course, the shares crashed and I lost all my money in a few months. I can’t remember the company’s name but I still wince at the financial loss.

That was probably the most stupid thing I ever did.

I decided never to invest in shares again.

No. I’ve never had the spare money – or thought or desire to start a pension. Now, because I’ve written nine crime novels and they’ve all been quite popular, I’m hoping they’ll be my pension.

I always loved writing, but I turned to writing crime novels because I had a terrible incident in 2005 when I was kidnapped. Somebody crawled into my car, put a knife to my throat and drove me away. I don’t think it was because he thought I was a celebrity, it was just a genuine carjack. But he wouldn’t let me out of the car and he told me I was going to be raped. Those words lived with me for a long time. I was lucky. Eventually, I was able to unlock the door and jump from the car while it was still moving. 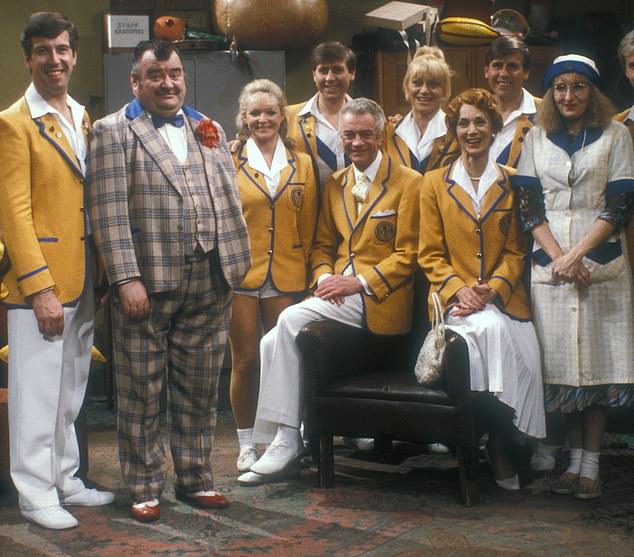 If the Yellowcoat fits: Linda, pictured third from left, on the set of the 1980s sitcom Hi-de-Hi!

I wasn’t actually in the car that long. But afterwards, the fear in my head wouldn’t go away. So I put it down on paper – it was my way of dealing with what happened – and that’s how my first book got published.

I’ve gone on to become a quite successful crime novelist. Interestingly, reviewers say my work is filmic and my characters are strong – I guess because as an actor, I studied characterisation.

Yes, I own my own home. It’s a four-bedroom house with a lovely garden which backs on to a farm. It’s near Bromley, but it’s countrified. We bought it 18 months ago and I don’t think it’s gone up in value. It’s a home, rather than an investment.

What is the one little luxury you treat yourself to?

Magazines. I love buying them. I’ll buy at least six a month. I read them for a bit of escapism. I like Good Housekeeping, Woman and Home and Kent Life, but I also read the supplements of all the national newspapers. I read You magazine on a Sunday – cover to cover: I love it.

I’m a vegetarian and a big animal lover, so I would spend more on animal welfare and impose stricter rules on slaughterhouses with financial penalties if businesses broke the law.

I also think the RSPCA should be state-funded. There are some very inhumane aspects to the way animals are killed that distress me – and people get away with doing things to animals they could never get away with on human beings.

Yes I do, particularly animal charities. I am also a trustee of the Actors’ Benevolent Fund and support theatrical charities.

To have enough money to buy my husband a pint of Guinness every day – if he wants one. I don’t mind what I’ve got as long as I can shut myself away and get on with writing my next book.

THIS IS MONEY PODCAST