Hi-tech thieves push car thefts up by a third

Vehicle thefts in England and Wales have soared by almost a third in just three years, new figures show.

The dramatic rise suggests thieves are finding it increasingly easy to crack modern vehicle security systems, according to motoring group the RAC.

A senior policeman has also warned of an increase in operations by organised crime gangs exporting cars for profit as well as an increase in keyless car theft.

This can involve criminals using special transmitting devices to extend the signal from a car’s keyless fob to unlock and then start the car.

The figures were released by 40 police forces following Freedom of Information requests submitted by RAC.

Car manufacturers have invested huge amounts of money in immobilisers and alarms to deter thieves.

‘This is bad news for motorists as it has the effect of causing insurance premiums to rise at a time when they are already being pushed up by a variety of factors, not least the recent change to the discount rate for life-changing personal injury compensation claims and the rises in insurance premium tax.’

Mr Godfrey said a number of motorists are resorting to using anti-theft devices which were popular in the 1980s and early 1990s such as steering wheel locks.

‘They are still a very effective visible deterrent,’ he said.

‘But it is quite ironic as they were replaced a number of years ago by alarms and immobilisers, which until now, offered better theft prevention.’ 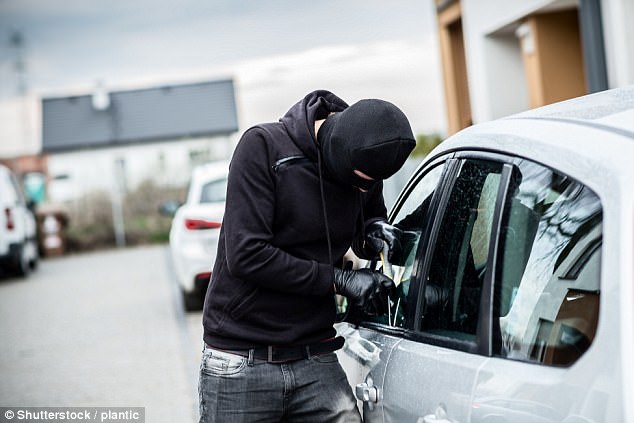 Police in Warwickshire reported the largest percentage increase in stolen vehicles from 2013 to 2016, up 189 per cent.

‘In recent years vehicle theft has started to increase across the country following many years of reductions.

We are seeing more sophisticated operations by organised crime gangs exporting cars for profit as well as increasing scooter and motorcycle and keyless car theft.’

Several cases have emerged of thieves stealing luxury cars which use a keyless start system. Earlier this year criminals in Essex were caught on CCTV stealing a £60,000 BMW X5 by holding a bag up in front of the door to the owner’s house.

They appeared to be using some sort of transmitting device inside the bag which was thought to have extended the signal from the car’s keyless fob which was inside the house.

As the car uses a keyless car system it can be unlocked by having the fob close by.

Mr McNulty said: ‘Local forces continue to advise people on simple and effective protective measures such as ensuring cars are parked and locked safely with appropriate alarms and no valuables on display.

He added that despite the recent increases total vehicle theft ‘remains at a historically low level’ with 85,000 fewer incidents reported to police this year than ten years ago.