The warning all parents need to hear: Mum reveals the hidden danger of BALLOONS at a child’s birthday party (and it has nothing to do with choking)

A worried mother has revealed how having floating balloons at a children’s birthday party can lead to disaster – with some decorators allegedly filling them with ‘explosive’ hydrogen to cut costs on helium.

At a quarter of the price of helium, hydrogen appears to be a budget-friendly option for operators looking to improve profit margins or keep costs low for customers.

But it isn’t a safe alternative, and not an industry-wide practice as it is an extremely volatile gas.

The gas is explosive and doesn’t need an open flame to set it off – the friction created by kids playing with them is enough.

The mum said her son’s birthday balloon ‘exploded, shaking the house’ after they had hit it around causing friction to build

Tina and her family learned about the helium replacement the hard way – when a giant, attractive balloon exploded ‘shaking her house’.

The family had held onto the balloon after her son’s seventh birthday party and had been playing with it moments before it exploded.

‘They tossed the balloon like a beach ball and we even joined in a couple of times. My son took it with him to the bedroom because he wanted to pee and suddenly we heard a LOUD explosion and the force rocked our house,’ she said in a post published by Tiny Hearts Education.

‘We even saw a bit of spark/fire along with the boom,’ she said.

Her son was burned on the forearm when the balloon exploded.

‘We rushed to check on him and bits of balloon skins were everywhere. Some got stuck on the ceiling and some melted on the floor tiles. Miraculously they missed my son’s eyes and face,’ she said.

The accident left the mum and her husband confused – as their understanding was helium never explodes even when exposed to fire.

‘Balloons are meant to be safe and fun,’ she said.

When she contacted the seller she was told the person who filled the balloon had ‘forgotten’ to put a warning sticker on the balloons noting they were filled with hydrogen.

‘This is too dangerous and not many people know this. Like me, they would assume it’s helium. Balloons are usually near cakes and lighted candles,’ she said.

She added that she wasn’t making the post to shame the sellers but to warn parents to ask for helium specifically when ordering balloons.

‘Hydrogen can react with oxygen along with friction to create energy. The big balloon contained tiny balloons inside which was a recipe for disaster,’ she said.

The family’s game of hitting the balloon had caused enough friction for the explosion.

Why is helium used instead of hydrogen by most operators?

Helium on other hand is inserting and cool. Helium atoms are bigger and diffuse less rapidly through a balloon and it won’t burn or react in anyway.

It may be more expensive but it’s much safer to store and work with and almost as light.

Why do we use helium and not hydrogen balloons?

In order to get a floating balloon you want a gas which is as light as possible. Helium is quite a lot lighter than air. The problem is that hydrogen is explosive, and if you have children running around with balloons that could catch fire and blow up in their faces, it may have some health and safety implications

‘No need for a spark or flame. It’s a ticking time bomb if enough friction is made.’

She said parents shouldn’t let their children play with floating balloons unless they know what gas was used to inflate them.

The woman’s post was received with shock and thanks by other parents.

‘Thank you for sharing. You would never know this unless you were told or worked with the items. Hope everyone is ok. What a fright it would have been.

Some parents questioned how the allegedly common practice could be allowed. 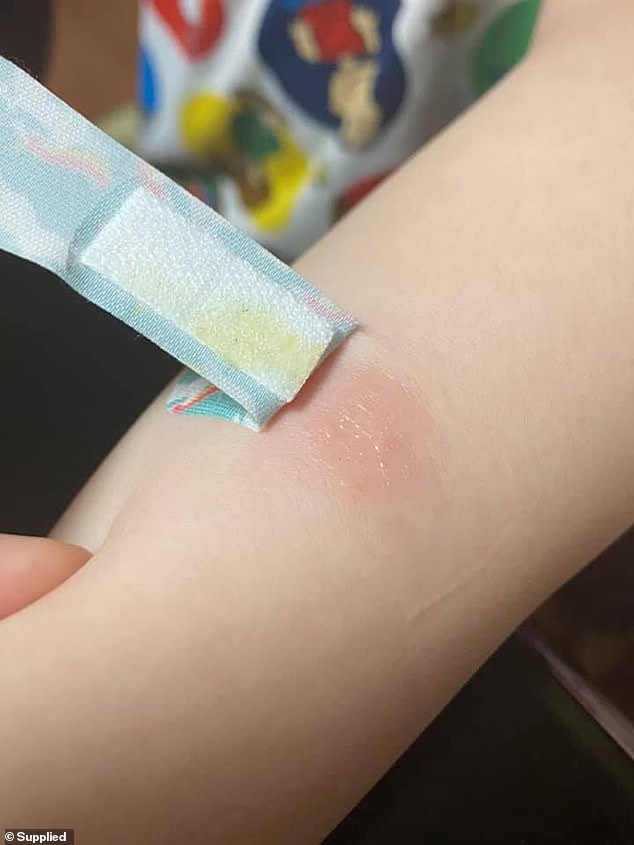 ‘From how your explaining it, this really seems like a practice that should be illegal!!! That is so dangerous! What was to happen if one of these filled balloons was at a party near the birthday cake and when lit with children all around this balloon exploded spraying the balloon pieces all over the children,’ one wrote on the post.

But others were skeptical noting a balloon of that size, filled with hydrogen would ‘burn the house down’.

‘Look at the size of the balloon. It wouldn’t be the latex balloon being scraped off the tiles, it would be cooked kid,’ one man pointed out.

Others told the woman to take the seller to a consumer watchdog.