A cheerleader is given a fright at a volleyball game as the railing collapses at the arena while she hi-fives fans.

After her team’s win, the commentator calls out the name of cheerleader number 21, which is believed to be in America.

The cheerleader wearing yellow does a lap of the court and runs over to the bottom row of the stand to hi-five fans.

However just before she reaches the end of the row, the railing falls down causing the entire bench and the cheerleader to topple onto the court. 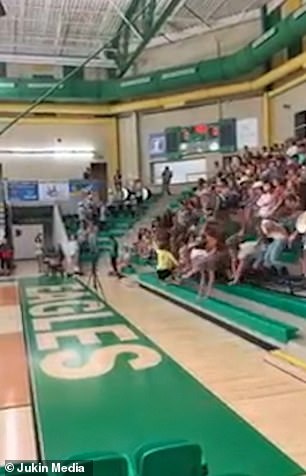 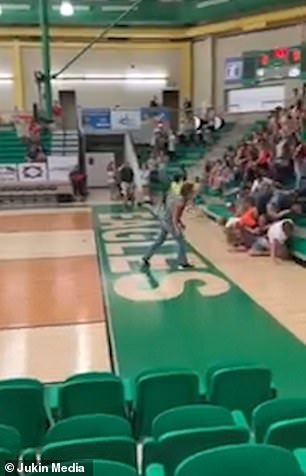 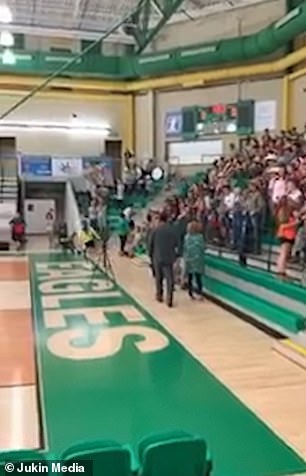 Fans pile on top of each other at the court (left) and one man is seen making his way back to his seat. The cheerleader then springs to her feet (right) and receives claps from the arena

Gasps can be heard from around the arena and a woman recording the footage is overheard saying, ‘oh my gosh, oh no’.

Luckily some of the fans stumble to their feet and the cheerleader runs back to her teammates.

As the commentator calls the next cheerleader, Amber, a fan is seen doing press-ups on the floor – much to the amusement of the audience.

Another four cheerleaders are read out and they do a lap of the court but avoid hi-fiving the front row. 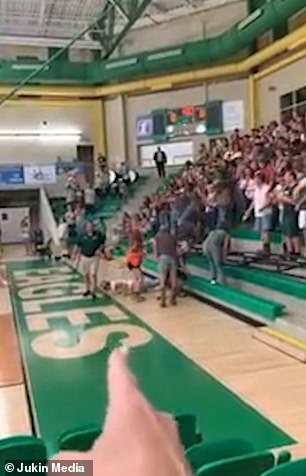 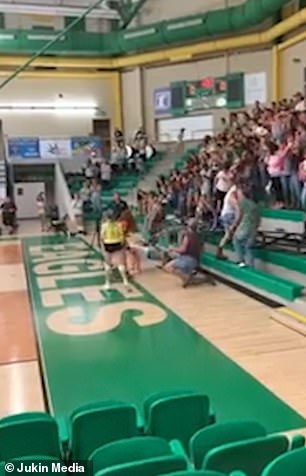 One man appears to make the most of the limelight and does some press-ups (left) on the court as the woman recording the video is seen pointing over to him. The next cheerleader named Amber (right) struggles to hi-five the fans who are still struggling to their feet

People from around the court can be seen walking over to the bottom row as the rail is lifted back into place.