There have been an array of eyebrow trends popping up on social media lately—and high heel brows are the latest one to stir up the beauty community.

The trend, which sees one brow transformed into a five-inch stiletto, turns the bottom of the shoe into the arch of the brow for an arresting look.

New trend: Instagram account SkyzEditz shared a photo of the high heel brow, which was the result of an altered photo of the influencer Megan Feather

The look is thus not the result of clever make-up, but instead was created thanks to editing software.

‘I was looking at the emoji icons and thinking, what would look weird as an eyebrow?’ Stefan Oskys, the 19-year-old behind the Instagram account, told Racked. ‘Then I saw the heel one and I was like, that will get people talking because it’s insane.’

The account previously created the fishtail brow, an intense brow trend that saw people Photoshop old pictures of themselves so that the arch of their brow appeared split in two, with the top part flicking upward to resemble the tail of the fish.

One of the people subjected to the high heel brow digital manipulation was Megan Feather, a beauty influencer.

But others thought the look was creative and all in good fun. One person commented: ‘Some people seriously need to realize it’s a joke and she’s allowed to do what she wants, it’s only a bit of fun.’

SkyzEditz also did the high heel brow on Isabella Chavez, another Instagram influencer known for her makeup skills. 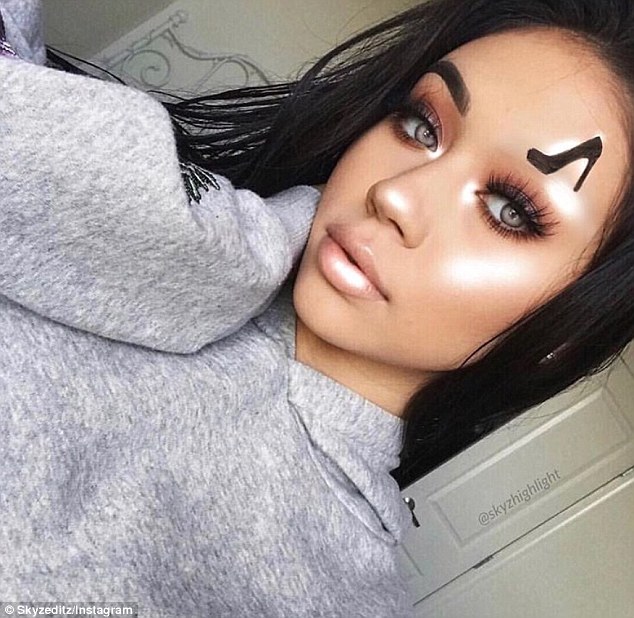 Not real: The high heel brow is digitally edited. SkyzEditz is known for altering photos of celebrities and Instagram influencers. Pictured above is Isabella Chavez 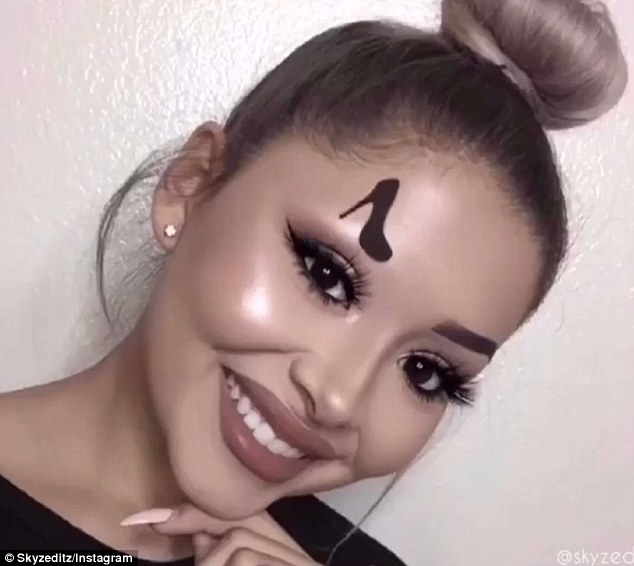 Fans and haters: Some people shared their opinion of the trend on Instagram with some hating it and others thinking it was good fun. YouTuber Daisy Marquez is pictured above

Once again, people had a lot to say, with one person who commented: ‘People are out of control’, while another person simply said ‘no’.

But there were a few who liked it and even wanted SkyzEditz to do a high heel brow on her.

Unfortunately, the high heel brow fan didn’t get her wish but SkyzEditz did share a brief high heel brow tutorial clip to its Instagram account using a photo of YouTuber Daisy Marquez.

The clip shows how the influencer’s natural brow is erased to be replaced with the stiletto shape.

One person was enthralled and commented: ‘Well you know what I’m doing in photography tomorrow’, while another person tagged a friend and jokingly commented: ‘You have to try this, let’s see your artistic flare.’

Others weren’t as amused or didn’t see the appeal with one comment that said: ‘I really don’t understand all these trends.’

But regardless of how disliked some eyebrow trends might be, it seem like they show no signs of stopping.

SkyzEditz has already shared photos of Grinch brows, which feature the end of the eyebrow going upward into a squiggle shape. The account also created stripe brows, with spaces between both brows.