A study led by experts at the University of Manchester Dental School reveals the risks of using over-the-counter products.

But other treatments, including those containing sodium chlorite or sodium carbonate peroxide, can be sold by any pharmacist to anyone walking in off the street.

The research team, writing in the British Dental Journal, said traditional bleaching treatments have 30 years of safety data, but little research has been done to show over-the-counter products are safe.

They found that the products significantly reduced the hardness of the teeth and substantially damaged dental surfaces. 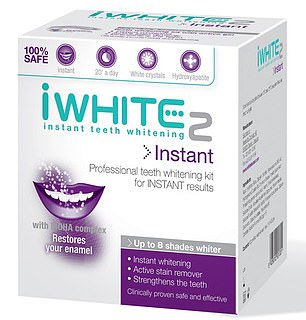 Professor Damien Walmsley, of the British Dental Association, said: ‘The lack of clarity over chemicals used in over-the-counter and online products means you could be gambling with your teeth.’

The British Dental Bleaching Society, which commissioned the study, said it was concerned over-the-counter products could be harmful and advised anyone wishing to have their teeth whitened to see their dentist.

Superdrug declined to comment but a spokesman said it would be reading the study ‘with interest’.

A Boots UK spokesman said: ‘The safety of our customers is extremely important to us and we thoroughly assess all of our dental care products before we put them on sale.’