Boris Johnson yesterday insisted ‘the price of freedom is worth paying’ as the war in Ukraine drives up prices in Britain.

Making a comparison to the Second World War, the Prime Minister said the defeat of Nazi Germany had been ‘very expensive… but it bought decades and decades of stability’.

The conflict in Ukraine has led to massive increases in the cost of living as energy, fuel and food prices have all spiralled.

The UK has so far contributed around £1.5billion of economic and humanitarian support to the country, plus some £1.3billion of military assistance.

As he attended a G7 summit in Germany yesterday, Mr Johnson argued that Western allies must continue to back Ukraine as it would ultimately make the world a safer and more prosperous place.

A shopping centre with around 1,000 people inside at time was hit by Russian strikes earlier today

He warned that not standing up to Vladimir Putin’s aggression would lead to ‘absolutely chilling’ consequences, such as China launching its own invasions.

Seeking to reassure the British public about the cost of the conflict, Mr Johnson told BBC News: ‘I think that the economic impacts on the UK will start to abate, we’ll find ways around things and some of the cost pressures will start to come down.

‘But just in terms of staying the course, imagine if you didn’t. Imagine if we allowed Putin to get away with the violent acquisition of huge chunks of another country, a sovereign, independent territory – the lessons for that would be absolutely chilling in all of the countries of the former Soviet Union.

‘You can see what’s happening in the Baltic countries already.

‘But the read across would also be felt in East Asia, as well.

‘So, in terms of the economic effects of that, that would mean long-term instability, it would mean anxiety across the world.’

Mr Johnson refused to put a limit on British support for Ukraine in either time or money, saying: ‘The point I would make to people is, I think that sometimes the price of freedom is worth paying.

‘And just remember, it took the democracies, in the middle of the last century, a long time to recognise that they had to resist tyranny and aggression.

‘It took them a long time, it was very expensive. But what it bought in the end, with the defeat of the dictators, particularly of Nazi Germany, it bought decades and decades of stability, a world order that relied on a rules-based international system.

Downing Street last night did not rule out the possibility that Mr Johnson could boycott a G20 summit due to be held in Indonesia in November if Putin attends.

The PM yesterday praised the ‘Dunkirk spirit’ being used to get food supplies out of Ukraine where 25million tonnes of grain are currently blocked by Russian forces.

A government source said the PM had been ‘struck’ by how leaders were ‘talking about all kinds of smaller ways’ they can get grain out of the country, as well as trying to end the blockade of its ports. 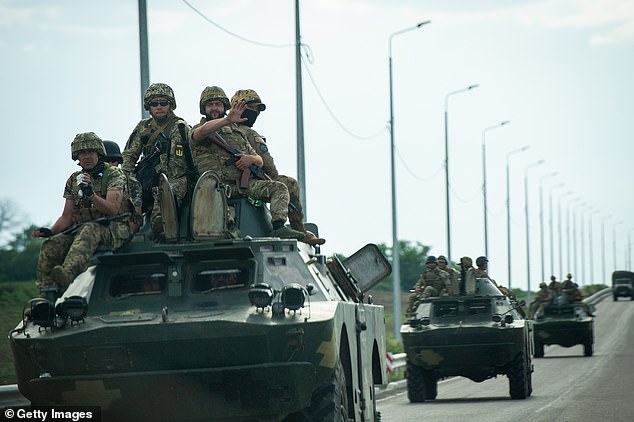 ‘Whether it’s boats on canals, lorries, railways, he saw a bit of the Dunkirk spirit,’ the source said.

‘You can achieve a lot through small micro movements.’

The Prime Minister last night announced a dramatic rise in funding for a programme to bring Ukrainian scientists to the UK so they can continue their research at British universities.

More than 130 academics will be supported by the Researchers at Risk scheme as the Government quadruples its budget to almost £13million.

Mr Johnson said: ‘People across the UK have opened their hearts and their homes to support those fleeing violence in Ukraine, and our world-leading universities, research institutions and tech businesses are no different.

‘Science and technology will be decisive in ensuring Putin fails in Ukraine, and it will be crucial as we rebuild the Ukrainian economy.’

He also opened the door to Russian scientists who value ‘openness, freedom and the pursuit of knowledge’.

G7 leaders also discussed a cap on the price of Russian oil.

Details were not agreed at the summit in Elmau, Germany, but it would involve tying the price cap to the services that make trading oil possible, meaning insurers would be barred from dealing with shipments that are above the cap.

One US official said they were looking to ‘starve’ Putin of his main source of cash.