A 25-year-old who tried to hijack a Bangladesh Airlines flight to Dubai, forcing the plane to make an emergency landing, was shot dead by security forces.

Bangladeshi special forces stormed Biman Bangladesh Airlines flight BG 147, which was on its way to the UAE from Dhaka, after a passenger claimed to have a gun and a bomb.

The suspect, who is believed to have been ‘psychologically deranged,’ fired a gun twice while attempting to hijack the plane, according to one passenger.

A passenger on a Biman Bangladesh Airlines flight bound for Dubai tried to storm the cockpit with a gun. The plane is pictured

‘Just ten minutes after the plane took off he fired twice,’ the passenger told The Straits Times.

Army and police officials cordoned off the aircraft and after an attempt to talk to the suspected hijacker was met with aggression he was shot.

The suspect later died, according to AFP news agency.

‘We tried to arrest him or get him to surrender but he refused and then we shot him,’ Maj Gen Motiur Rahman told reporters.

‘He is a Bangladeshi. We found a pistol from him and nothing else,’ he added.

After a member of crew noticed a passenger was acting suspiciously the flight made an emergency landing in the Bangladeshi coastal city of Chittagong.

All 142 passengers disembarked from the flight safely.

Army and police officers have cordoned off the aircraft and are talking to the suspected hijacker. It is not yet clear why the suspect tried to take control of the plane.

‘We have successfully rescued everyone,’ said Air Vice Marshall Mofid, who goes by one name, after security forces stormed the plane and shot a 25-year-old man for attempting to hijack flight BG147 which had taken off from the capital Dhaka.

The plane landed safely at Chittagong airport in southeastern Bangladesh, where the passengers were evacuated.

Army, Navy and elite police cordoned off the plane after it landed.

The country’s civil aviation chief Nayeem Hasan earlier said the suspect had claimed to have a bomb.

‘From the talks and dialogue we have with him, it seems he is psychologically deranged,’ Hasan said after the man was arrested. 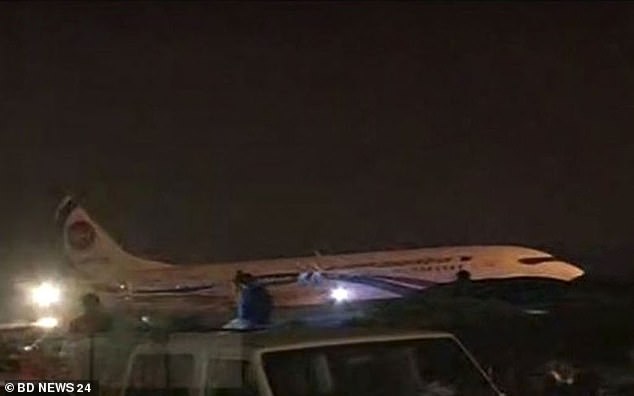 Police have described the drama as an ‘untoward incident’ and have not confirmed that the incident was a highjacking. 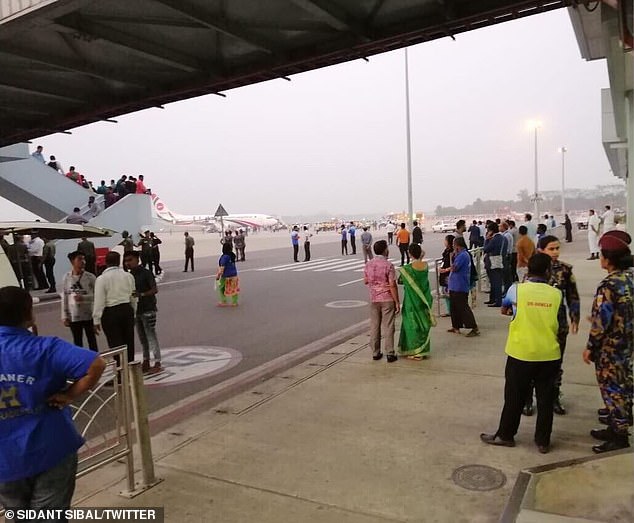 Civil Aviation Secretary Mohibul Haque said a cabin crew member raised alarm finding the behavior of a passenger suspicious. The scene at the airport is pictured