Hiker, 37, is attacked by a mama grizzly bear protecting her cubs near Old Faithful in Yellowstone

Woman, 37, is knocked over and scratched by mama bear protecting her cubs after coming too close to two grizzly bears while hiking alone in Yellowstone National Park

A hiker from Columbia has suffered minor injuries after she was attacked by a grizzly bear protecting her cubs in Wyoming.

The 37-year-old woman was on the Fairy Fall Trail near Old Faithful in Yellowstone National Park in Missouri on Monday morning when she encountered two bears at close range.

According to park officials, the woman – who was alone – attempted to use her bear spray during the encounter.

The female bear proceeded to knock her over and scratch her thigh. 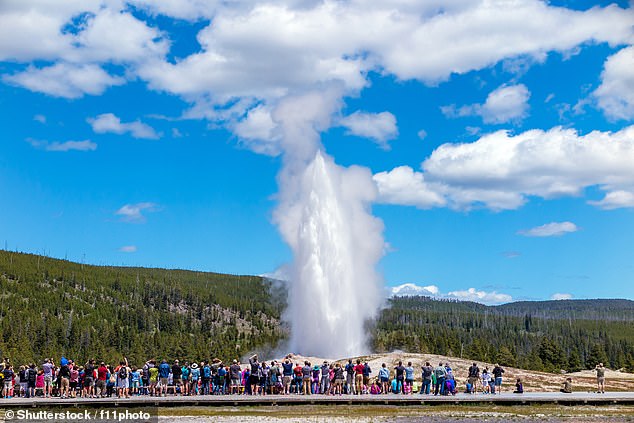 The hiker from Missouri encountered two bears at close range. The female bear knocked her over and scratched her thigh. She obtained facial injuries when falling down. Pictured; Tourists watching the Old Faithful erupting in Wyoming

The woman – who has not been identified – suffered facial injuries from when she was knocked to the ground.

‘From the injured person’s statements, this appears to be a typical case of a mother grizzly bear protecting her offspring following a close-range encounter,’ said bear management biologist Kerry Gunther.

‘Because this bear was displaying natural protective behavior for its cub, no action will be taken against the bear.

‘Several trails in the area will be closed to give the grizzly family group time to clear from the area.’

It’s the first time this year someone has been attacked in the park.

Yellowstone reopened two (east and south) of five entrances on May 18, following closures due to the coronavirus pandemic.

The area has been closed down again to allow the bears a chance to clear vicinity.

The last bear-human encounter was last June when a black bear bit into an occupied tent then bit a woman’s thigh.

The National Parks Service said on Wednesday that the incident is under investigation.

There was no additional information to share and there are no known images of the incident.

The NPS is advising visitors to give animals space when near a trail, boardwalk, parking lot, or in a developed area, with at least 100 yards (91 m) for bears and wolves, and 25 yards (23 m) for large animals including bison, elk, bighorn sheep, deer, moose, and coyotes. 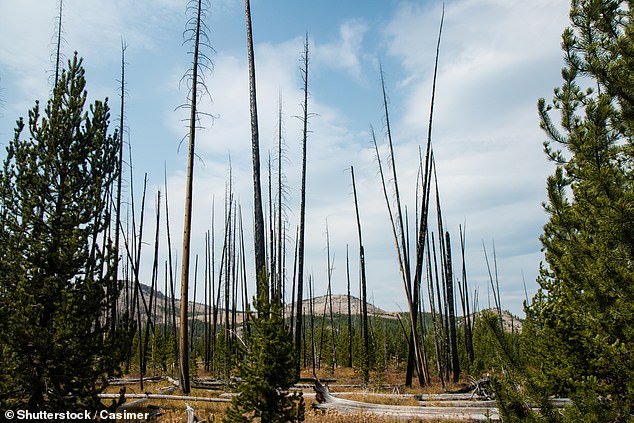