Hilarious moment a BULL rampages through Israeli BANK (so was it angry because it was in the red?)

A mad scramble ensued inside an Israeli bank on Monday when an escaped rampaging bull charged down its corridors, causing workers to flee.

The unusual incident began in a car park outside the Bank Leumi building, near Tel Aviv, before the huge animal somehow found its way inside.

CCTV footage showed the bull – with rope trailing from its neck – barrelling down office corridors, as people made a desperate attempt to bring it under control.

A mad scramble ensued inside an Israeli office building on Monday when a rampaging bull (pictured entering the offices) charged down the corridors, causing workers to flee

The bank confirmed the incident in a statement, saying it took half an hour for the bull to be re-captured by its owner and taken away.

Video from the carpark – found in the industrial zone north of Lod, a region south-east of Tel Aviv – showed the muscled animal charging between vehicles and directly at onlookers, who ran for cover. 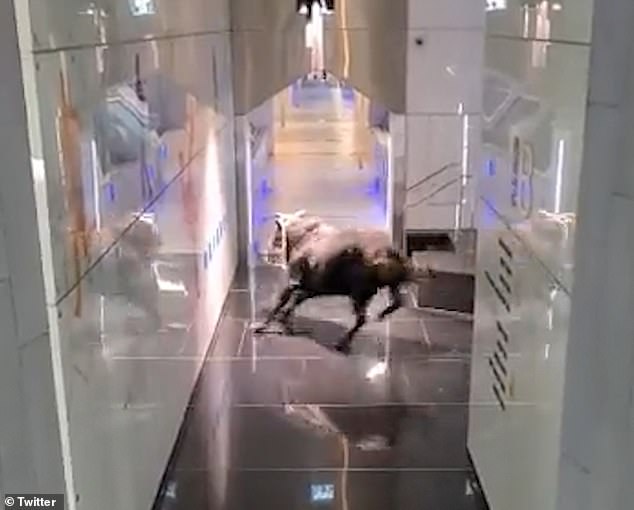 CCTV footage showed the bull – with rope trailing from its neck – barrelling down the office corridors, as people made a desperate attempt to bring it under control

Footage from inside showed the animal skidding on the polished floor as it charged around corners, chasing people down corridors while looking for an exit.

Other people were seen trying to attract the bull’s attention, perhaps in an effort to drive it out of the building.

Eventually, the bull’s owner was tracked down and called to the scene. A vet was also called incase the animal needed to be tranquilised, according to newspaper Israel Hayom.

Employing the help of other people in the office building, the owner used ropes to set up a trap at the end of the corridor to catch the bull.

In more footage, one man was shown bravely attracting the bull’s attention before sprinting down the corridor away from it – luring the creature into the rope. 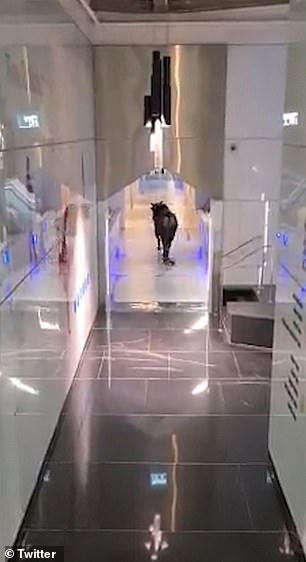 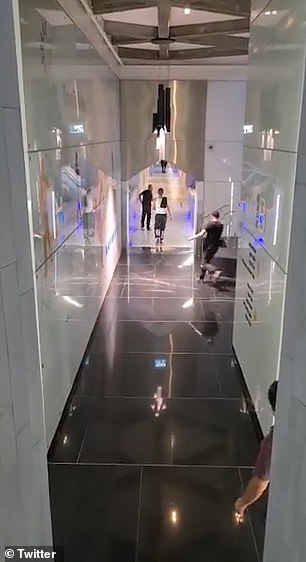 Footage from inside showed the animal skidding on the polished floor as it charged around corners, chasing people down corridors while looking for an exit. Others (right) were shown trying to get the bull’s attention in an attempt to goad it out of the building

For a few seconds in the footage, the bull appears to become suspicious of the ropes draped across the entranceway, but eventually walks through anyway.

The rope falls around its neck, and the man is able to pull it tight around the beast.

The footage ends as the bull runs away from the man, who quickly pursues it down another corridor.

‘Early this morning, a bull entered one of Bank Leumi’s office buildings in Lod. He was caught, and led outside the facility,’ the bank said in a statement.

‘Meanwhile, the incident was reported to local authorities and the municipal veterinary services. No one was injured and no damage was caused.’

It was not immediately clear how the ball escaped, or where it had come from.