An award-winning and journalist author managed to keep their cool during an MSNBC segment after their children hilariously crashed the live interview.

During the segment, Gessen appears to be sitting inside their home while speaking over an online video call.

First, the family dog ambles into the camera’s view just seconds before one of Gessen’s children walks down the stairs.

The child, realizing that Gessen is mid-interview, decides not to pass up an opportunity for some playful mischief.

The young child sneaks behind Gessen’s back and begins to wave their hands so they can be seen on camera.

Like a sixth sense, Gessen’s older child comes down the stairs and is shocked to see their sibling crashing the interview. 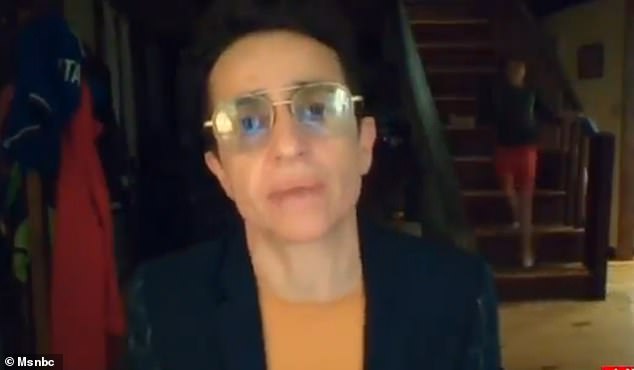 While speaking during the interview, one of Gessen’s children (right) sneaked behind their back and began waving their hands 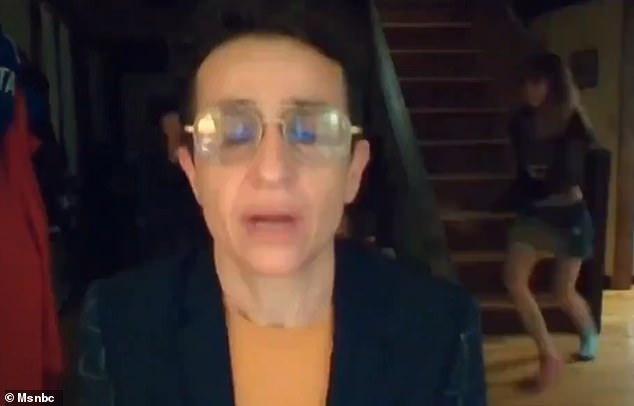 One of Gessen’s older children came downstairs, saw what their sibling was doing and immediately jumped into aciton

The older child suddenly jumps down three steps, grabs their sibling and quickly drags them off-screen into an adjacent room.

All the while, Gessen doesn’t even bat an eye and continues the interview without missing a beat. 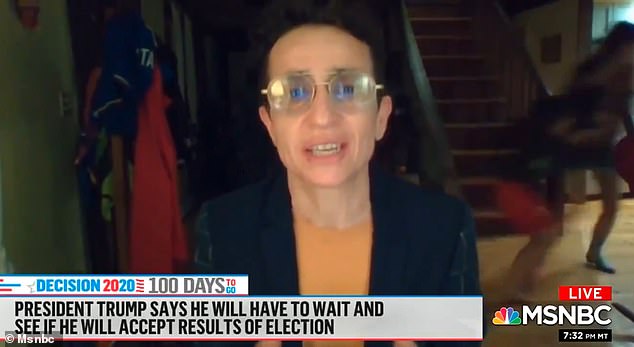 Social media users were charmed by the funny moment and shared their thoughts on Twitter.

‘Watching Masha Gessen interviewed on MSNBC as kids and a dog tumble energetically down the stairs in the background is [heart emoji],’ wrote Dr. Elizabeth Sacha Baroness Cohen.

‘Pandemic is horrible but the humanizing effect of non-studio interviews has had a real upside, I think.’

Dr. Cohen: ‘Pandemic is horrible but the humanizing effect of non-studio interviews has had a real upside, I think’

Other users theorized that the youngest child had escaped from supervision upstairs.

‘I bet Kid 2 was supposed to be watching Kid 1 upstairs. Good job, Ms. Gessen – just kept on going like the professional you are!’ wrote a user.

‘That was the older sister drag I remember from when my older sister used to do it to me,’ wrote another person. ‘Quick. Effective. Hurts like hell.’

Since lockdown orders caused several workplace to close amid the ongoing coronavirus pandemic, millions of staffers have shifted their office online and embraced video-conferencing tools like Zoom.

In another similar incident, a Wittenberg University English class got a bit of comic relief during a recent Zoom lesson thanks to their professor’s bored teenage son.

Mike Mattison, an English professor at the Springfield, Ohio school, was teaching his class via video conference when his 19-year-old son Lucas popped up in the background.

Lucas dressed up in several different costumes, including a wetsuit and a graduation cap and gown, and acted out scenes behind his father, who continued teaching as if nothing was happening in the background. 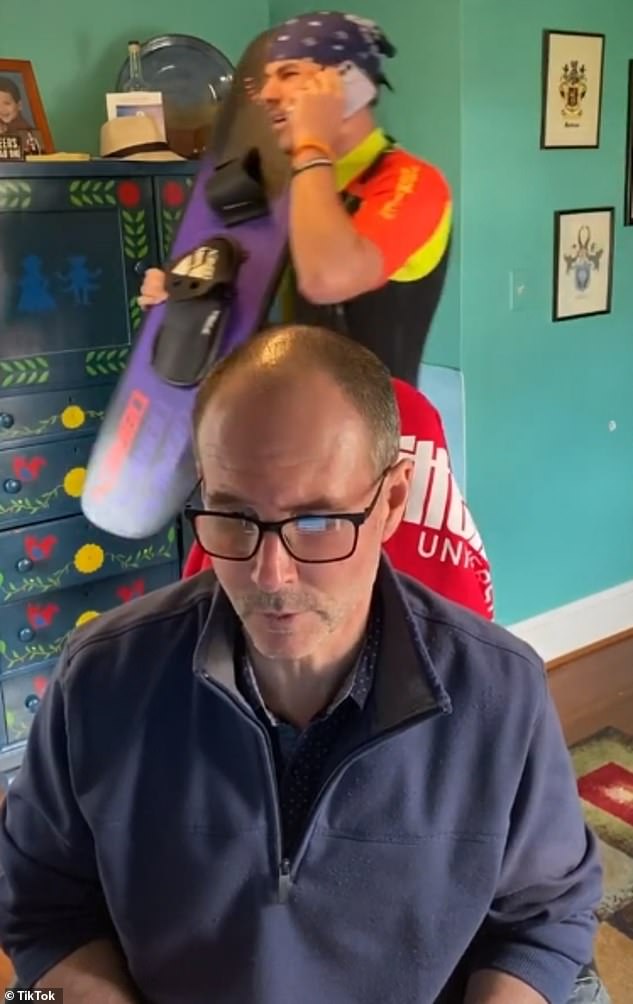 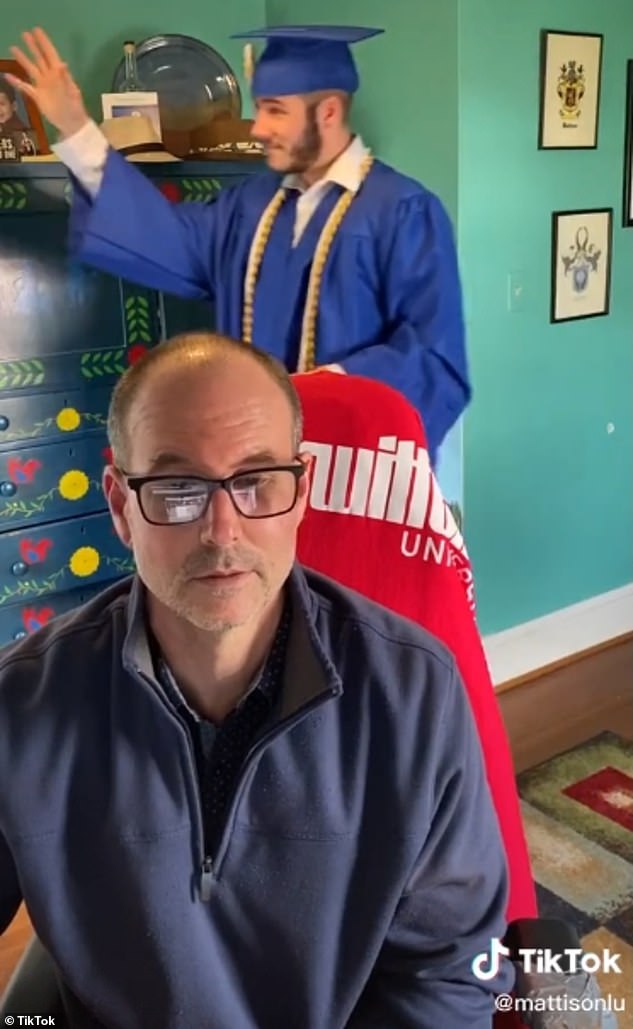 For a laugh: Lucas dressed in a wetsuit, cap and gown, and other costumes and acted out comedic bits behind his dad

Lucas is himself a freshman at Xavier University, but is home quarantining with his family.

Meanwhile his father has continued to hold classes online.

Lucas thought it would be fun to set up a joke for his students, and recorded the whole thing for TikTok.

The video begins with Professor Mattison teaching while Lucas walks behind him in a wetsuit, carrying a surfboard and talking on a cell phone, seemingly lost on his way to the beach.

He then comes back in a cap and gown, pretending to wave at friends at a graduation ceremony.

Then he’s an explorer, donning is best Indiana Jones outfit and looking around through a cardboard paper towel roll. 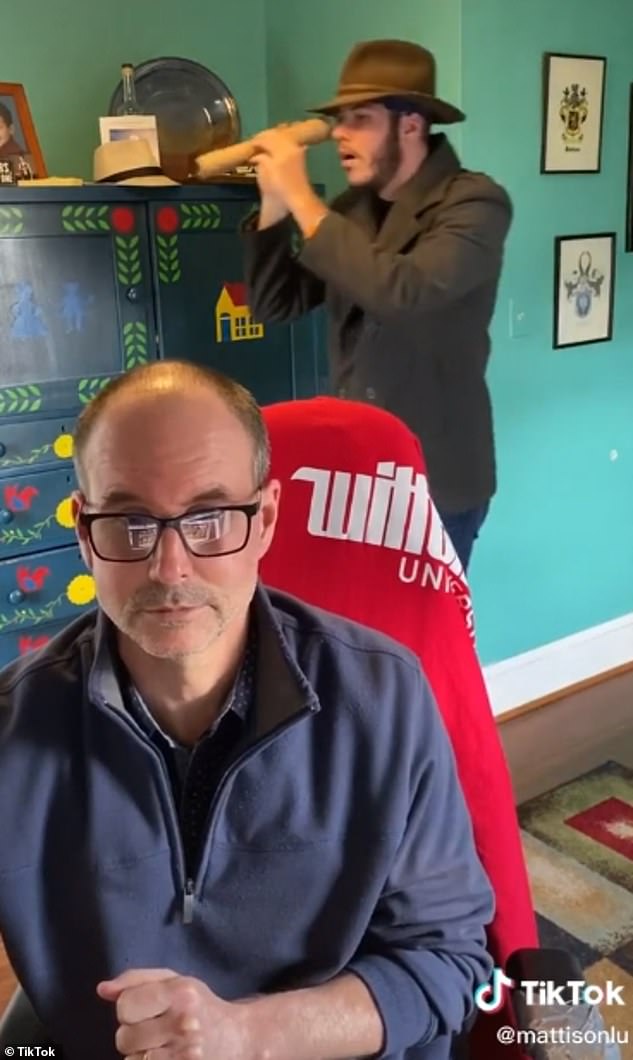 Mixing it up: He also dressed as an explorer, donning is best Indiana Jones outfit and looking around through a cardboard paper towel roll 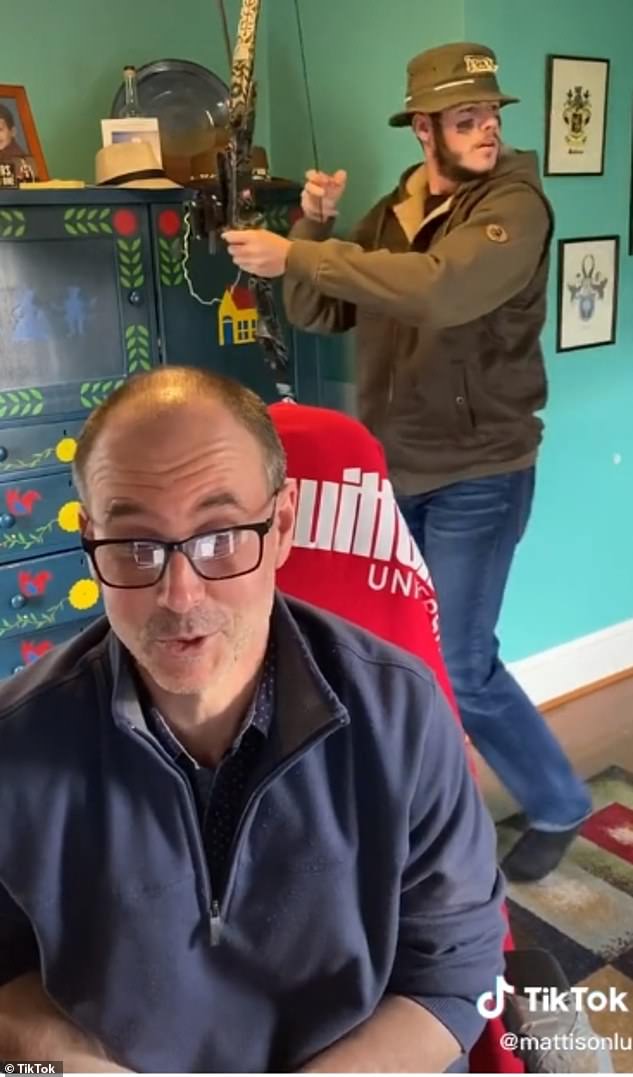 Permission: Lucas cleared the prank with his dad before setting it up 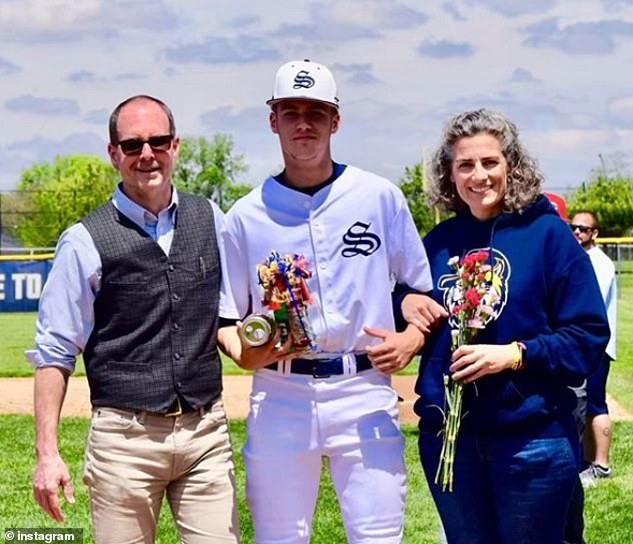 Goofing around: Lucas (pictured with his parents) said his dad likes to have fun with his students

He changes again, becoming a soldier with a crossbow and a ninja with a gun. All the while, his dad continues to teach.

But when Lucas walks out in his final costume, Professor Mattison finally gets his revenge. He picks up a Nerf gun he has hidden under the desk, and turns around to shoot his son several times, scaring him out of the frame.

Lucas told Good Morning America that he’d cleared the prank with his dad before setting it up.

‘I had to [tell my dad] I was doing it because I set up my camera in front of his computer,’ he said.

‘I didn’t give him many details. I just told him, “I’m going to be giving them something to laugh at,”‘ he added.

His dad was game, Lucas said.

‘He loves having fun with his students. He’s known as the “fun professor,”‘ he said.